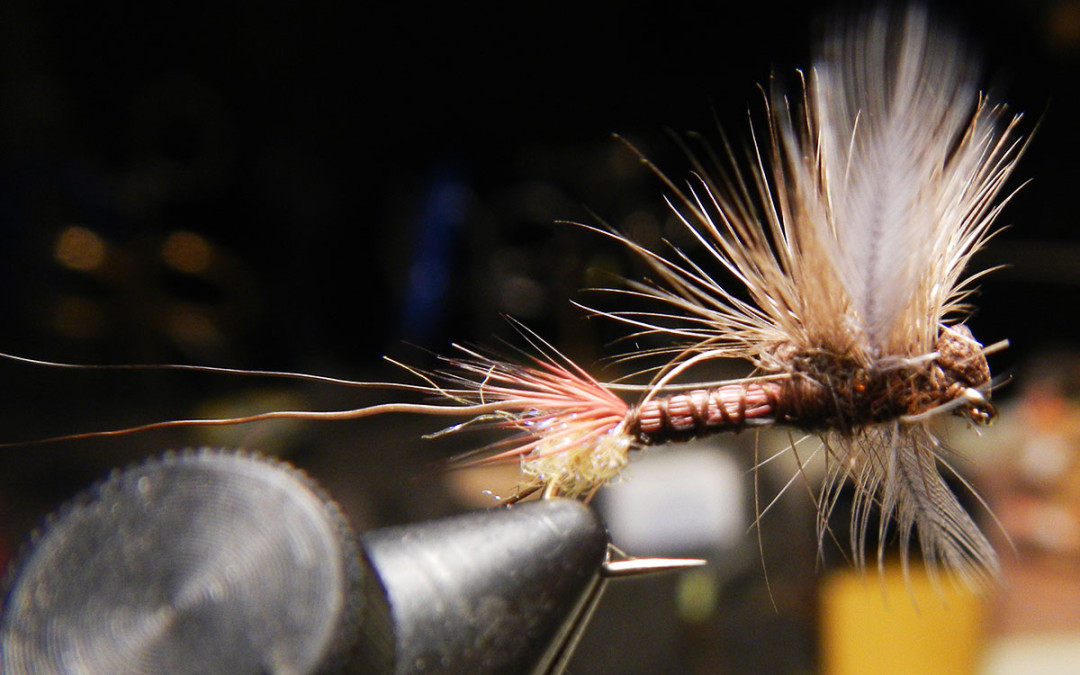 The stacked hackle fly has caught on like wildfire around the shop. It has an intangible fishiness that goes beyond the way it looks in the vise. After all, one would expect a clipped hackle fly to perform similarly. But the stacked hackle lands differently — heavier even — and certainly fishes differently. And for that reason we go through the extra pains of tying it. For beginners, our simple pictorial likely won’t suffice as adequate instruction. But for moderate to accomplished tyers who haven’t tied a stacked hackle, it’s worth a shot! This fly is at its best in heavier water. It’s a high floating fly that is simultaneously a slim, attractive spinner. 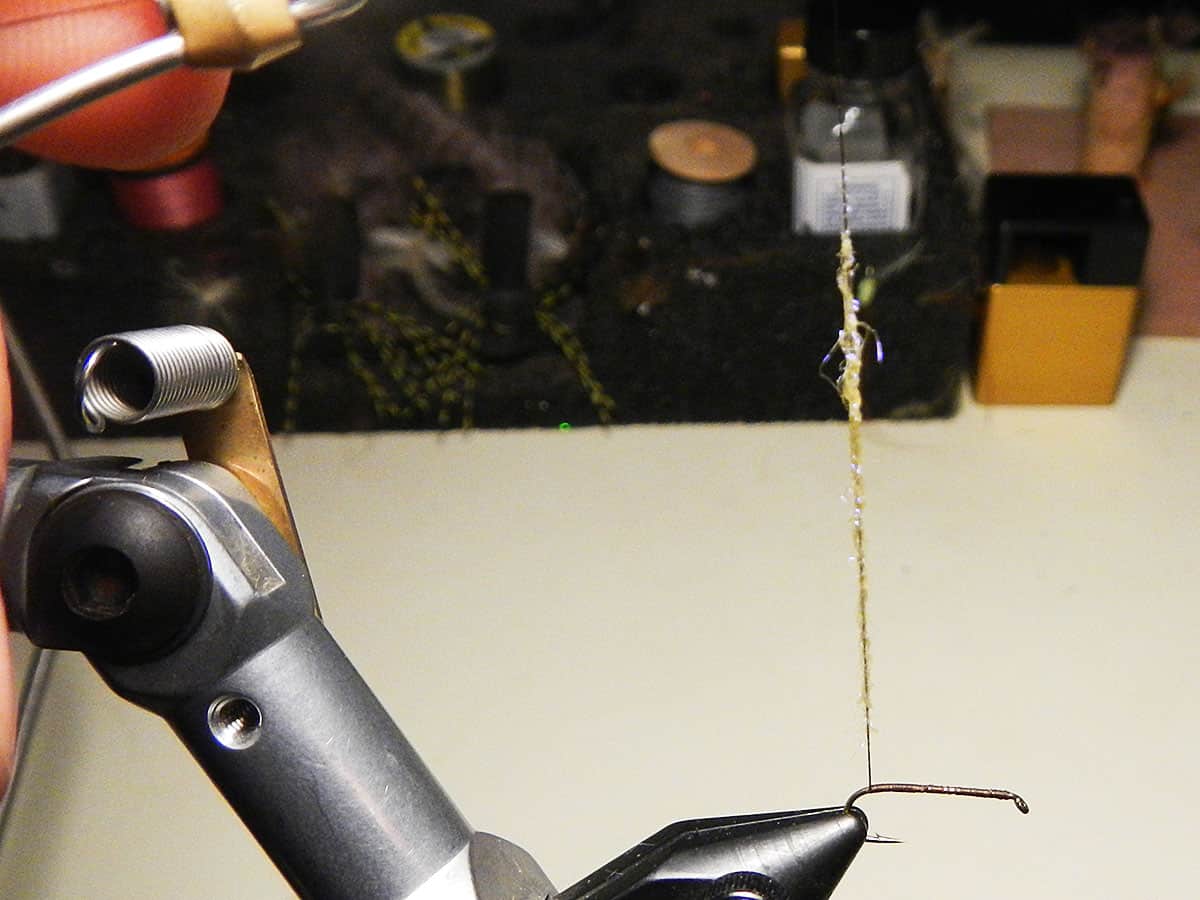 Step 1: Start thread toward eye of the hook. Clip tag end. Wrap thread back covering the hook shank. Dub on Yellow UV Ice Dub as shown. Stand thread up to vertical (pictured) and then, with your thumb and forefinger, slide the dubbing down on the thread so it forms a ball. This dubbing ball will serve as the trademark egg sack on the hendrickson spinner. 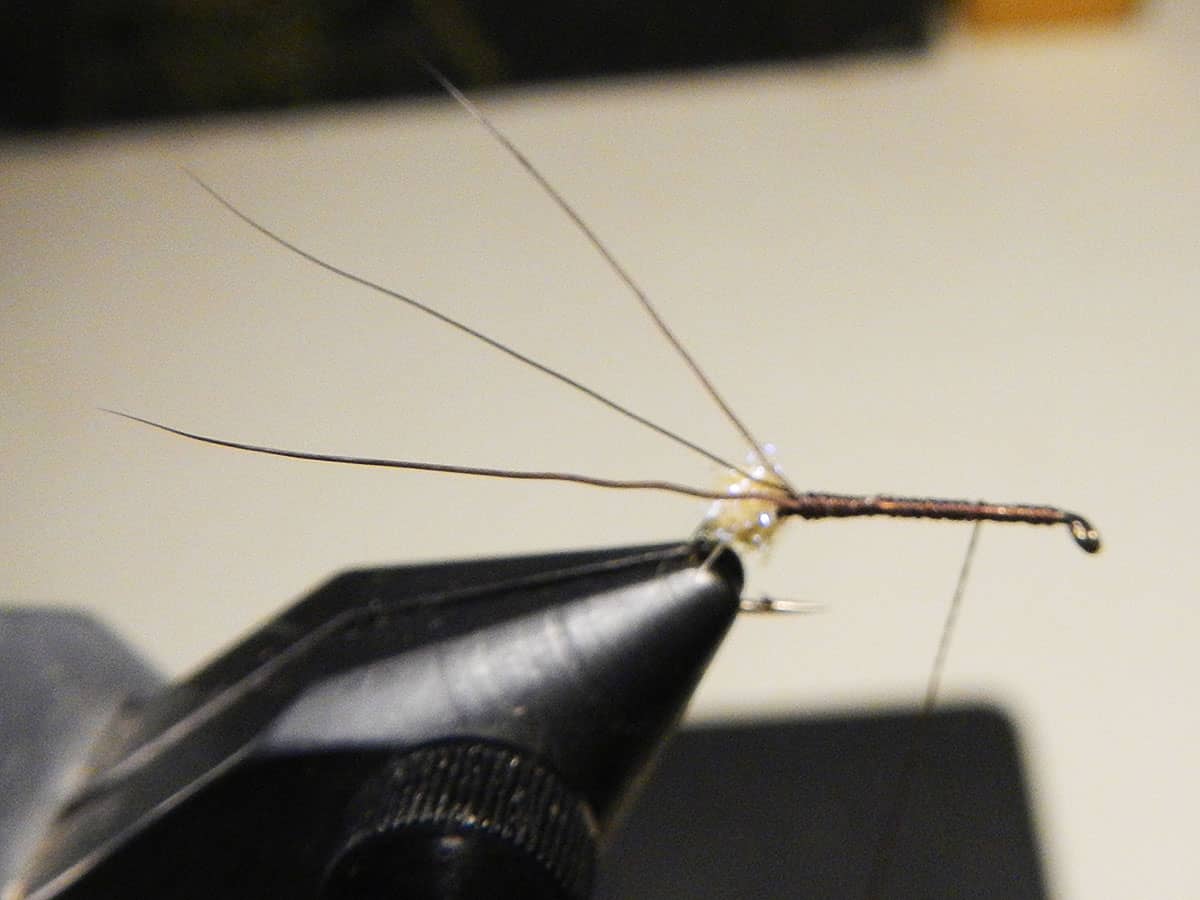 Step 2: Once you’ve formed the dubbing ball, wrap the thread in front of it. Select three moose body fibers and tie these so they flare over the egg sack/dubbing ball. 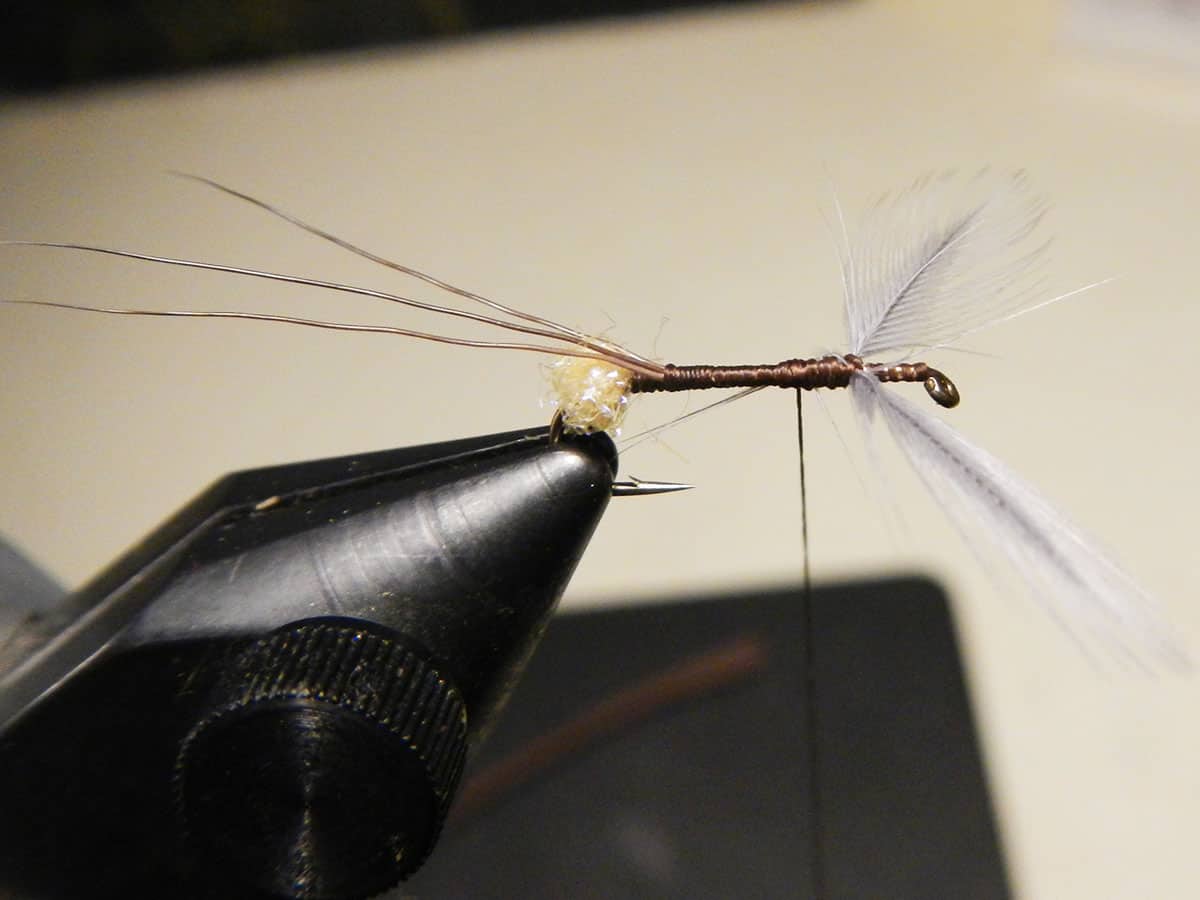 Step 3: Tie in hen feathers. I mount these forward and then split them with the thread, locking them into place. . Tying them forward is especially useful on this fly — it keeps them out of the way! The hen feathers should be roughly as long as the hook shank. 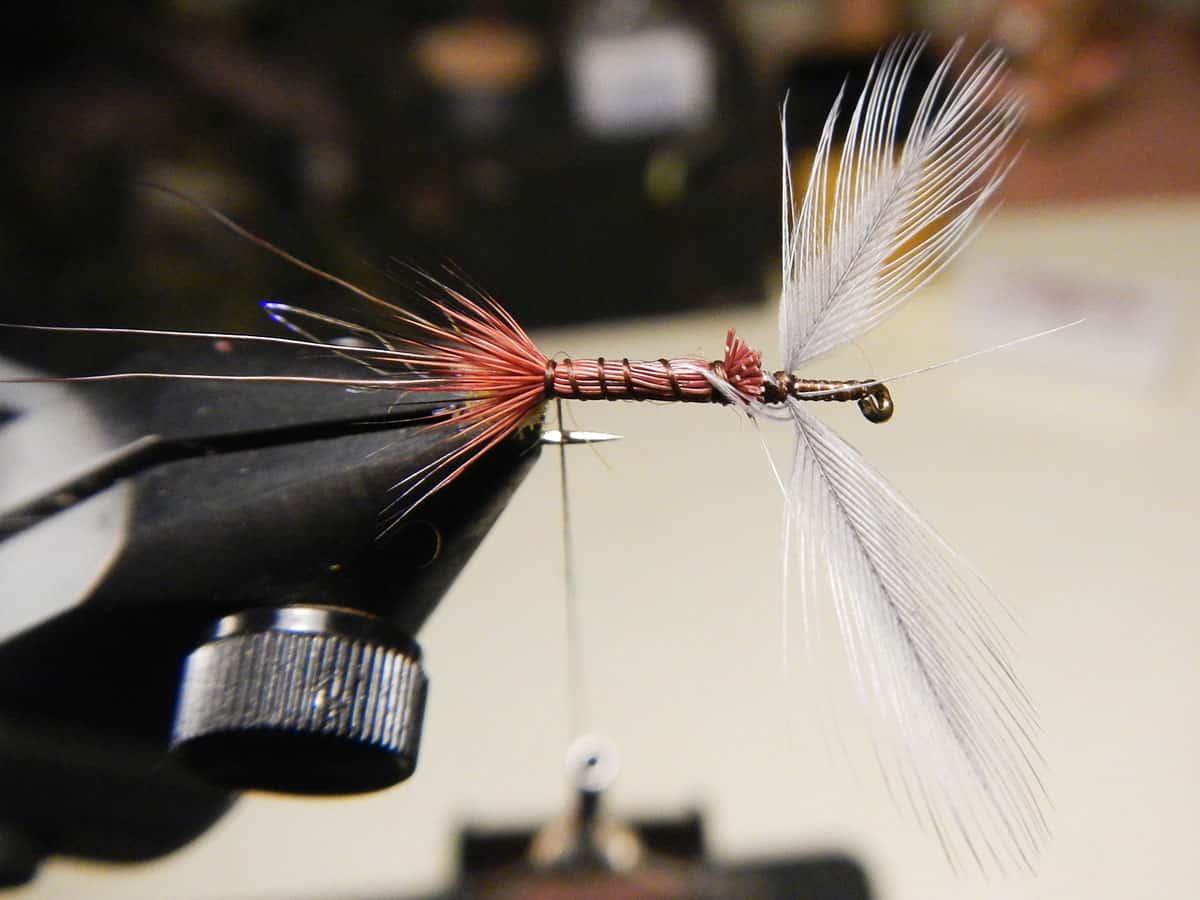 Step 4: Tie in mahogany deer hair Roberts Drake Style. Whereas in any other Robert’s Drake style fly, I’d be concerned with getting the deer hair to cover the entire hook shank, in this fly, I just want the deer hair on the top of the shank. In the example, I’ve trapped a wing fiber in with the deer hair. This will be covered up later. 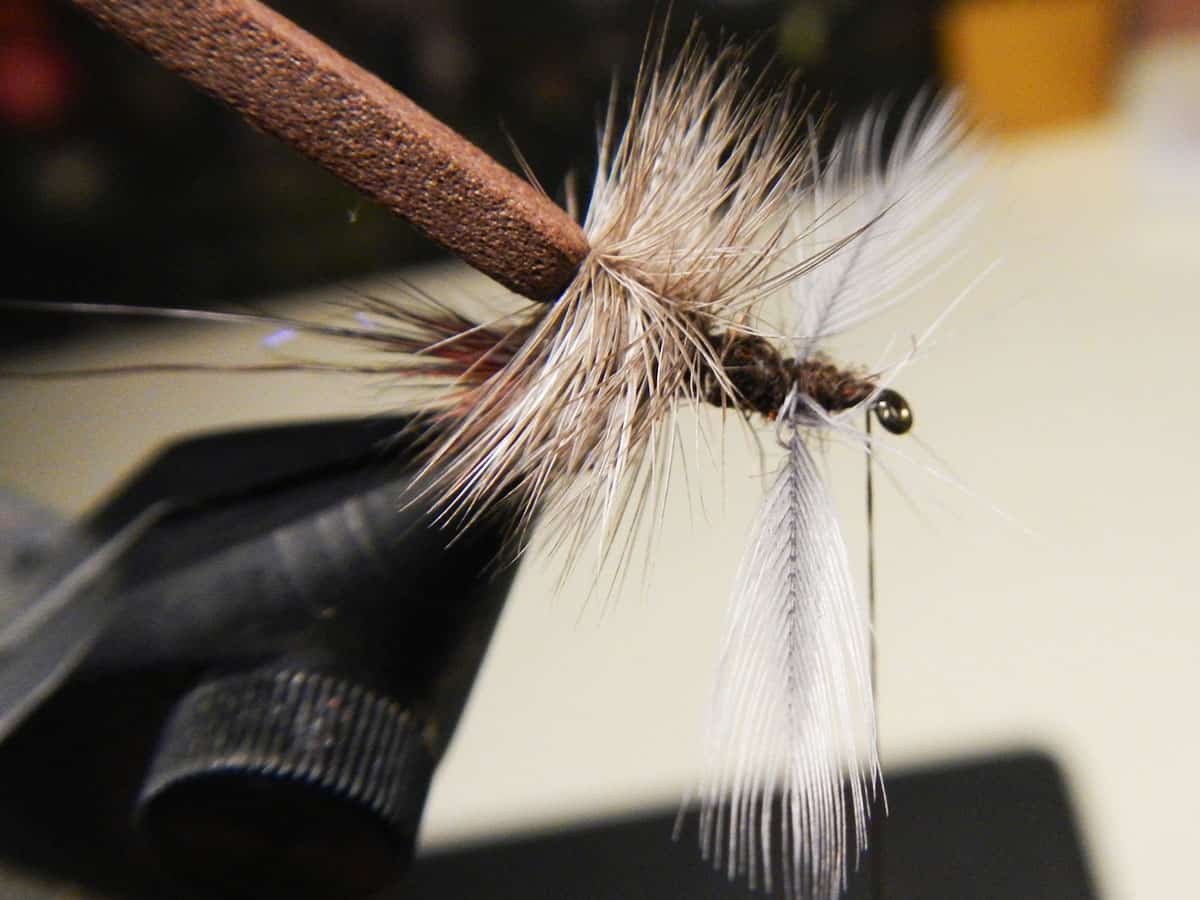 Step 5: Tie in a foam post (I use just a square sheet of foam and cut it up less than 1/8″ by 1/8″ in a post) just shy of halfway down the hookshank from the eye. You’ll want the extra room to fold the post forward on this fly. Now tie in hackle in front of the post (between the post and the down wings). Wrap the hackle up the foam post twice the height you would for a normal parachute, and then back down. Tie off hackle in front of post. Now you’re ready to fold the post forward and “stack” the hackle. 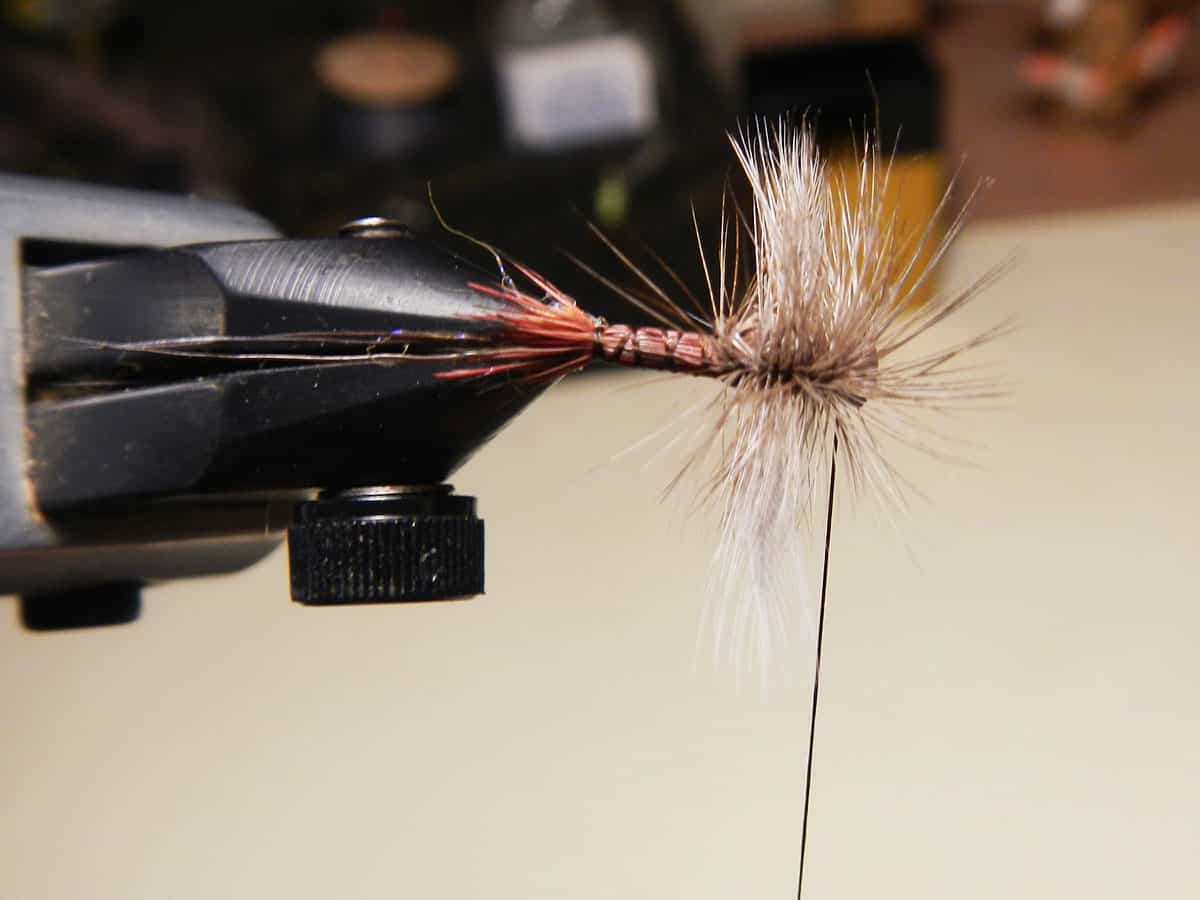 Step 6: Here the post has now been pulled forward. I like to leave a bump of foam in front of the thread (over the eye) for a head. I then finish with a whip finish under the foam head. 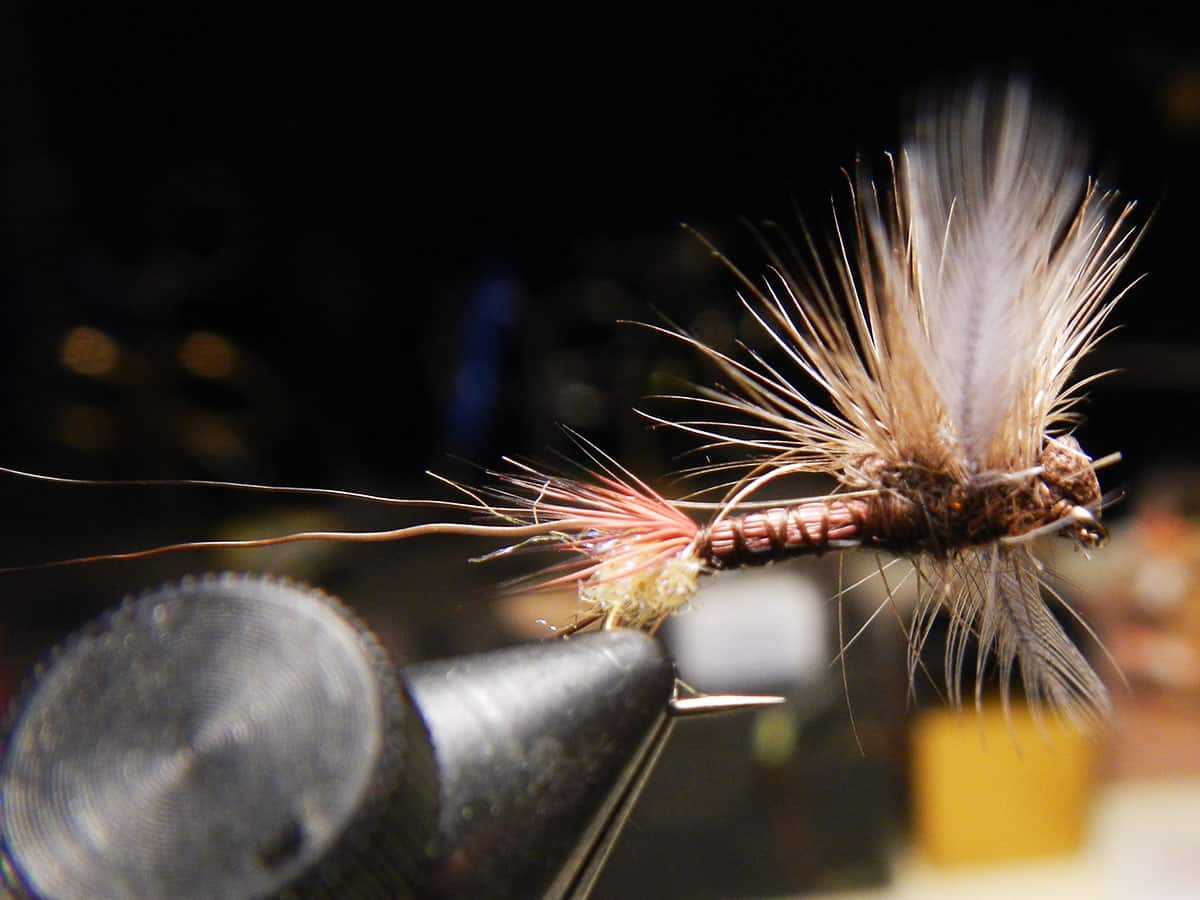 Step 7: The finished fly is one of those bugs that fishes better on the river than it looks in the vise. It is both buggy and slim, a durable floater that is also subtle.