Enduring the Cruelest Month with Movies, Pike, and Text Messages 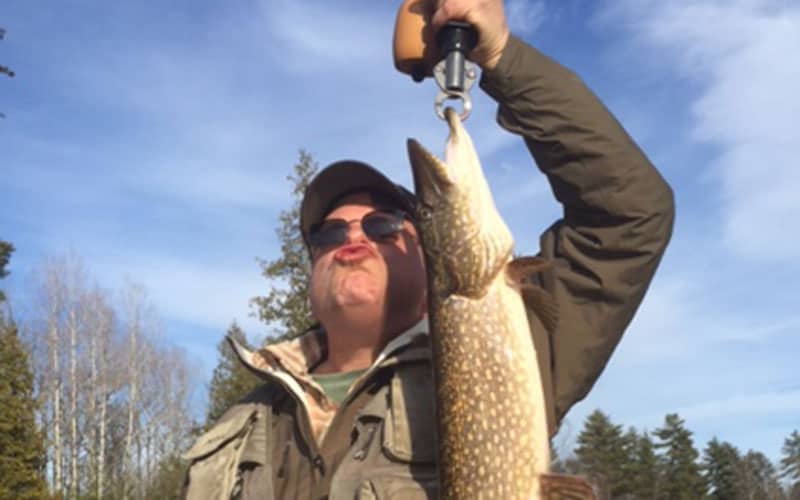 I just finished watching “The River” for what must be the 15th time. It’s what passes for coping below M-55 in those stubborn last days of winter. And it works, sort of…

Watching (or listening, more like it) as Verlac and Dennis Burke stalk and land a giant in the hex hatch… Watching Otis cuss and endure the masking sulphur spinner fall during what should be, but often isn’t, brown drakes on the South Branch… Watching Greenberg’s final expression of pure horror when Willy loses that early morning pig at the very end… But, maybe most of all, listening to Lance preach like some kind of river shaman…

Otis McCurdy and I stayed mostly on our feet for eight hours last Saturday, jawing with so many in the greater Au Sable tribe. That was nothing compared to the crews from Gates and so many other fly shops who talked themselves to the edge of asphyxiation. Now it’s four days later, the nighttime temperatures are moving back toward the teens, and mayflies are weeks away. It is the front side of the cruelest month.

Until you open your mind to other possibilities…

Otis texted me late yesterday afternoon with a picture of him holding a nice mid-teener landed on a streamer. He was out with Chef Matt on the obligatory spring streamer float which so often produces nothing but sometimes surprises which is exactly why you keep going back. Otis looks damned cold in that photo. 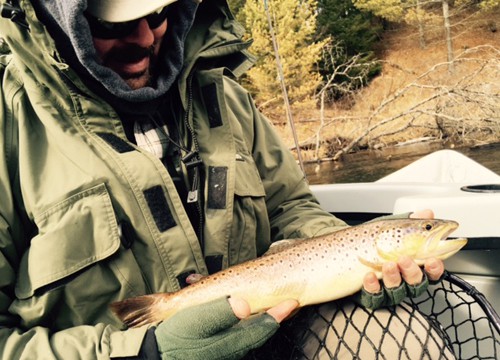 Chef Matt is a lucky charm during this cruelest month. I managed to sneak out with him and Jordan for a streamer float right before the Warren show… The good Chef had a donkey brown trout on five minutes into the float, but lost it in a wicked headshake. A while later we came to a familiar bend which has produced some toothy creatures in the past… And up from the pool came a pretty good river pike.

“Why don’t you jump out and follow it,” Jordan, the off-duty guide, said.

“Why don’t YOU jump out and net it,” I, the aging beer belly, said.

If you can all hang in there just a little bit longer, I think it’s going to be worth the wait. I really do… The snow is just about gone… The ground freeze and beaver ponds haven’t broken loose yet, but it’s beginning to look like a low water spring. Sure, that means high fire danger, which has its own special meaning ‘round about Stephan Bridge Road and down on the South Branch. But high fire danger and low water usually also mean awesome dry fly fishing.

It’s gonna be way different than last year’s spring struggle. I really believe that. Get ready.