Nothing I’d Rather Be Doing 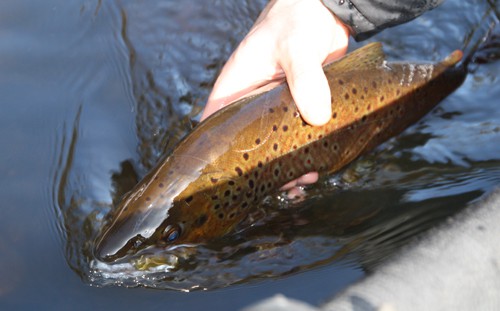 Yesterday, during a long float down the South Branch, I hit a pinnacle familiar to fly-fishers: it’s the point at which you know there’s nothing you’d rather be doing. I can’t say this happens every time I’m fishing. But it does happen often enough to make fishing-time an indispensable currency in my personal account. This time it was a dripping river valley and the sun burning through the snow-induced fog. As spring often does, the excitement has cut the memory into memories like the sun through the fog.

I snagged a tree on the right, and as Matt rowed us over to retrieve the fly, Steve — up front — sat there jigging his tan fly absently. I saw a trout swipe wildly for it three or four times, and eat the fly.

There was the trout that chased across a sand flat and ate my motionless fly while I picked at a sinking-line snarl…and the hail mary hookset and the miraculous luck that the fish was hooked.

The three big beaver colonies on the banks and the first smell of castor mounds.

The unexpected Mason Tract pike that destroyed a streamer and measured a hair shy of thirty inches.

Steve’s second fish that shot across the river, paused, and ate without hesitation.

The final fish at dusk that Matt caught (chicken chaser)

The sloppy take out, the water pooling in our footprints, the high soft bleat of ducks and the hum of timber trucks across the 72 bridge.

Not a bad place to be

The South Branch was low and clear. The rivers, in general, are low and clear and are now ice free. I would not float down to Parmalee, or down to McKinley, until this weekend, and not before calling around. But much of the river is now open, and trying to warm. A few stoneflies have been spotted, but aside from a few pictures, I haven’t seen one on the wing.

I do think that before Monday — somewhere — a trout will rise to a fly. I won’t be there. Chances are no one will. But I just like to think about it sometimes. Of some silly trout — less than a week after ice-out — deciding to eat a stone fly. It’ll probably be on the Manistee, at the tail-end of a long sandy flat, and the fish will likely rise, miss, and blush.

The forecast is good for fishing. It often is during the Midwest Fly Fishing Show, which is this weekend. A variety of streamers fished on both floating and sinking line have had their moments. The nymph fishing has been surprisingly slow, perhaps due to the very clear water. I expected better, but the best nymph anglers I know were out today and reported “it was as if the river was devoid of trout.” Streamer fishing though has been moving fish, though one must fish tight to the cover, and try to keep the fly near the cover for as long as possible before starting the retrieve.

This snowmelt will begin run-off. We have already begun the annual pumping of water from the lake that forms in front of the fly-shop. Barring rain, this will be an easy run-off, providing a nice stain to the water, and the start of what we think of as streamer season.

Tomorrow we load the trailer. Friday we set up. And Saturday and Sunday we’re at the Midwest Fly Fishing Show. We’re bringing most of the fly-shop, and we look forward to seeing everyone! The on-season and the off-season are very different to us up here. One side surrounded by people…and the other side not. It’s exciting to reconnect to the on-side, and clear our throats, and talk fishing. Because we love to fish, and love to talk fishing. We don’t work in a fly shop to make money. Or to fish for that matter (though it does keep us close to the river). We work in a fly shop to help people catch fish because we love the sport, and the fish. While visiting Gates, visit with Anglers of the Au Sable across the aisle. Ask questions about the proposed fish farm. Join Anglers in our mission to protect the river.

Also, please take the following DNR survey on Inland trout for the DNR’s Inland Trout Management Plan. This is our say on how the state makes the rules, and manages the resource. Click the link to participate:

We have guides available thru this weekend and next week for folks that can’t wait any longer to just go fishing. Then we’re off to the Midwest Fly Fishing Show this weekend. If you plan on going to the show, and haven’t signed up for our newsletter, you should. We’ll have specials and product features you only get by email!