A reason to play hooky! 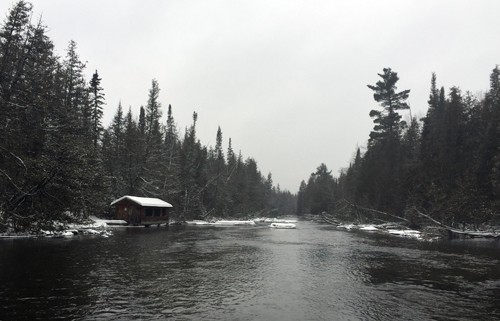 It’s nice to finally write a fishing report with the intention that some of the folks reading the report might get to do some trout fishing.

Yes, there may just be a reason to play hooky next week, or at least claim a long weekend for your own. The weather is supposed to break, with daytime temperatures this weekend in the 30s and next week – for a few days at least – in the low 40s. With our Free Fly Tying Saturday this weekend, it’s possible to tie some flies…and then try to catch a trout on them.

As of today, the river below Conners is frozen, as is the South Branch at the Chapel and in the slower water below Smith, and most of the North Branch. The river below Mio dam was also frozen the last I knew. That’s a lot of water that is more or less impenetrable. How long will the ice last? Probably not thru the weekend between Conners and McMasters, or on the South Branch, or below Mio dam. Of course, no one wants to be the first to find out.

We’ll try to have updated river conditions in the shop for those itching to get out fishing. For now it’s pretty much Burtons Landing down to Conners Flat on the mainstream.

The river has been fishing well and we’ve been able to get out on some of the warmer days. March doesn’t always play fair. We have a frozen septic line at the lodge getting reamed out tomorrow, yet we’re already thinking black stoneflies. Oftentimes some of this early spring fishing happens so quickly it’s hard to adjust to the possibility that in a few days we’ll be throwing streamers wearing only one pair of socks. Or that, a few days later, it could be below zero.

Black weighted streamers fished on a floating line have been catching trout. Not a lot.Just a few…but they’ve been pretty nice trout. The river as of now is VERY clear and thrashing the water won’t work. Try to get as close to the cover as you can get, and don’t start stripping right away. I usually mend upstream, and that gentle movement to the fly is the start of the retrieve. Until the water temperatures increase, or the water stains, the fishing won’t be fast and furious. But if you stick with it and really work the cover and deeper slow cuts and backwaters thoroughly, there are trout on the hunt. 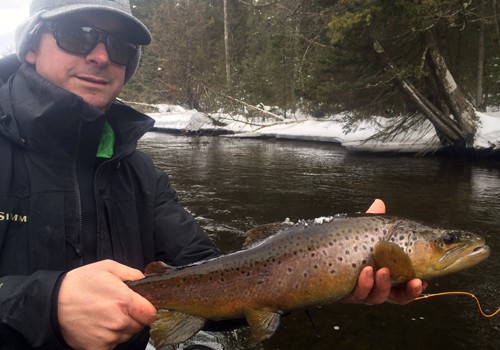 This fellow pulled harder than a winter fish ought to

We’ve also been spooking some large fish from the middle of the river and I think on some of the clear, warmer days in the forecast that the proficient nymph angler will do well working some of the deep water pools and runs. The river is stuffed full of mayfly nymphs right now. Specifically Hendrickson nymphs. Size 14 and 16 BH Pheasant tails, along with Prince Nymphs (black stones) and assorted other nymphs in that same basic size. Fluorocarbon really does seem more effective. And in the clear water, fine tippet matters. 5x and 6x make a difference.

I really love March fishing. While the dry fly opportunities aren’t going to be here yet, there’s so much to do. There’s indicator and tight line nymphing, sight nymphing, slow swinging streamers, deep dredging small streamers, or working the water quickly – on foot or in a boat – and hitting the banks. This is below the surface fishing, or fly fishing in the third dimension.

I had some great fishing with friends over the past couple days. Jac Ford invited me on a float down the only open water in the river system and we had a blast talking trout, eating the best bagels in the world, swilling coffee, poking ice from our guides, and we even got to use the net. A few days later, Steve, Matt and I floated again thru a strange misty storm that coated us in ice. At the end of the day we sounded like our waders were stuffed with newspaper – we were completely frozen.

“I’m not fishing again until my guides don’t freeze,” we said. 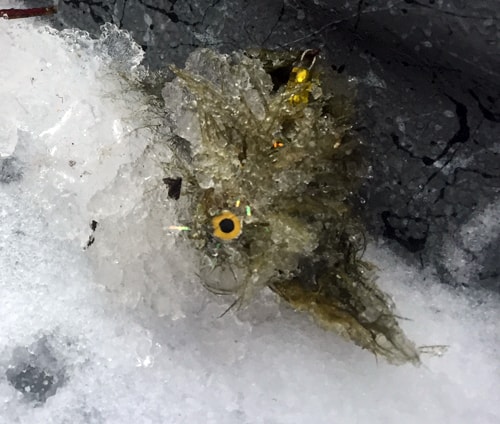 This is a time of year of melting snow (does it really smell sweet, or just seem to smell sweet?), of deer under the river cedars, of the feel that you’re no longer surviving. Like a river, the entire trout season is in front of us. It’s a good feeling.

We have guides available thru this weekend and next week for folks that can’t wait any longer to just go fishing. Then we’re off to the Midwest Fly Fishing Show next weekend. If you plan on going to the show, and haven’t signed up for our newsletter, you should. We’ll have specials and product features you only get by email! Sign up here.