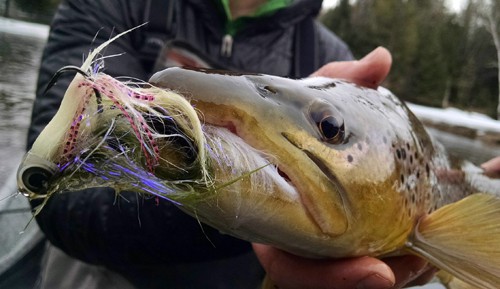 One excellent day of fishing can create enough optimism to fuel a dozen more. And anglers fondly chase memories that have grown fonder over the years, which is probably why most anglers would agree that it never is as good as it was. For the last two years Matt, Kyle and I have tried to repeat a particularly successful float we had in 2013, without considering that the particularly successful float was an aberration, or that our memory had either colored in or erased the quiet moments.

We would fish anyway, of course. Probably anywhere, and for anything. My friend sent me a pic of a bowfin caught on a streamer in an urban creek while waiting for an oil change. Exactly.

Yesterday was one of those days that really will fuel the next dozen spring streamer trips. Matt, Kyle and I launched late – at noon – after suffering every harmless setback imaginable. The streamer colors of choice on overcast days have been tans, light olives, and white (still black on the sunnier days), and we started there…and never switched. On the first good bank (a nice inside bend with alders and submerged logs and a long undercut) a good trout rolled and chased across the clear (and 38 degree) water before nipping the fly near the boat. 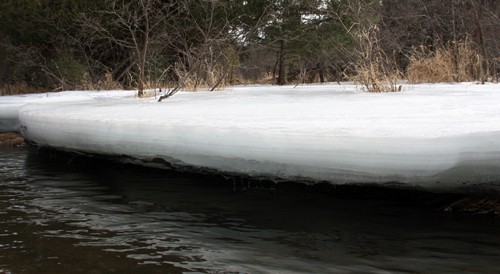 And that trend repeated itself the rest of the day. Forget the gravel and blue water. Forget the fast foamy logjams and the sweet gravel bars. Find the inside bends or “off” banks where the water was slow and the bottom was sandy…and there’d be trout. These fish were on “go” regardless of the water temperature. The water was clear, the sky was low and gray, and the wind howled out of the southwest. We had fish eat slowly. We had take the fly mid-jump, leading to the rare mid-air hook-set. We changed flies rarely (I didn’t change at all). We spooked pairs of wood ducks. Heard red-winged blackbirds. Saw more stoneflies. And watched an intense goose battle on a grassy, shit-covered bank.

Spring streamer fishing is here, even if run-off is more than half-over and the water is low and clear. Some areas are fishing better than others. On a sunny day I’d head to the tannic waters of the South Branch (in excellent condition for the wading angler) or the lower river, or to the Holy Waters to nymph fish. On a cloudy day I’d head almost anywhere. There’s spring in our steps around here, pardon the pun, as we find little bits of time to be on or near the water. The guides are going out more regularly. The tyers are wrapping up the rest of their spring orders. We have been fishing when we can while preparing for the busy season, and finding trout in great condition this spring. 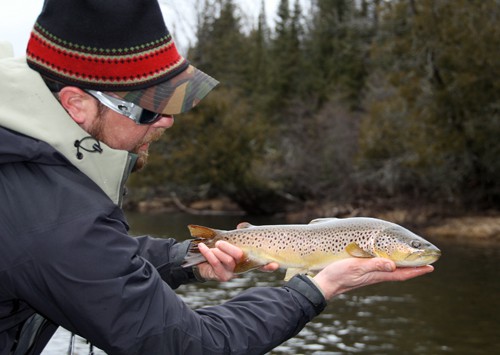 We had a dusting of snow tonight and cold weather tomorrow, and then it is to warm up throughout the weekend and next week. I expect a few slow mornings and early afternoons, with the best time to be out there for nymph fishing to be in the 2-4 pm range and for streamer fishing from 4 pm – 6 pm. Would this stop me from fishing all day? Absolutely not. But if one must choose his or her time on the water, choose late afternoon until the overnight air temperatures are in the twenties and thirties. I was able to sneak away for a cold, windy, and high sky afternoon on the North Branch this week, and worked like hell to find one fish willing to eat a streamer, after getting no interest until that point on anything, including nymphing a few “gimme” runs. Success should be measured in proportion to expectation. I expected beauty and found it. And saw a bear print in the snow but the picture didn’t come thru…so here’s this one: 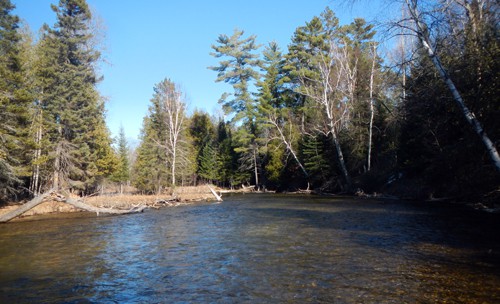 I know the fishing season is here when stories of this year replace stories of past years. Like Craig who wondered if he should go fishing, settled for a quick lap through his home water, and connected on a fish pushing the two-foot mark. My favorite though was Jordan, who took a break from working on a cabin he caretakes for to exercise his fishing privileges there, and without even putting on waders caught five dandy browns. He jigged a white and chartreuse streamer along the wood cover on the same bank he stood on. The hardest part, he said, was landing the fish without sliding down the huge slabs of ice and into the river. He went back, of course. Like almost every day. It wasn’t the same. Which I guess is how it often is. And probably how it should be.