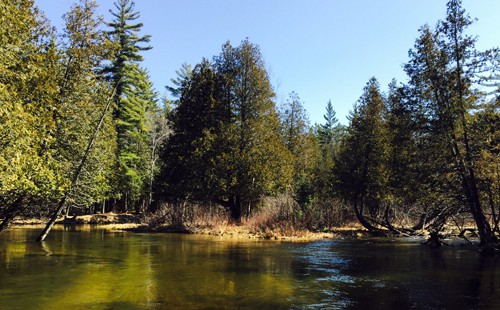 So…saw a fish rise today, and not a small one. It rose three times while I strung up the dry fly rod and then quit rising. That’s the nature of fish rising to black stones. I threw a cast (of course) and the trout inspected and refused. Damn, already? It’s only April 1st! After it was evident the fish was done rising, I stood on the bow and saw the fish pretty plainly in the clear water and bright sun. Maybe fifteen or sixteen inches….

Today was weird. I tried to ignore the fact that it was April Fools Day (you need a 2015 license startingtoday) but the niggling suspicion that nature was in on the prank kept me on edge. For one, the trout chased best right in the middle of the day. We saw trout after trout after trout chase our streamers, stop a foot away, and flee. We spooked huge trout out of stupid spots and then, as they fled, cast a streamer and had them turn and chase the fly back at the boat, before, of course, not eating. We saw ten million midges. We saw the aforementioned good rise. And at dusk, there were big trout all over the sand flats.

“The problem is that we’re moving in the wrong direction with the wrong fly,” I said as another fine trout bolted. I couldn’t help imagining what a 12-foot leader and some bead head nymphs, along with a quiet upstream approach, would have accomplished.

Today was slow in spots, and okay in others. A couple of guides found some pike and moved some trout and also saw a rise. Other found slow fishing. Temperature is a part of the puzzle, but it’s not the whole thing. The high skies and low water have resulted in some very spooky trout, and tomorrow’s forecast of clouds and maybe some showers should make for some better fishing. I’m excited to get out. 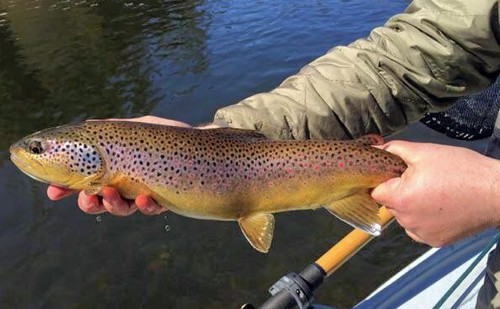 In general, the trout have chased best late in the day, and to a variety of colors. Today we moved fish on olive, white, tan and black. The two trout we landed came on black and white, so take from that what you will. Nymph fishing has been difficult due, I think, to the lack of color in the water. I’m hearing that from friends across the state, be they trout anglers or steelhead anglers.It’s not that the fish aren’t eating nymphs – I’m sure the trout we saw this evening sitting on the sand were drift-feeding on nymphs – it’s just that getting a fly deep is easy, but getting a fly deep quietly is difficult. You can’t fake weight, and from what I saw today, the splash of two split shot is more than enough to spook a trout, even if the trout is on the bottom of a pool. The best bet for the nymph angler is to cast far above the pool with less weight, and allow a longer drift to sufficiently sink the flies to the fish’s level. Using the tuck cast (stop the rod hard on the forward cast, and high: this propels the fly downward through the surface film) helps more than one might imagine, even with an indicator rig.

Our next spring milestone has nothing to do with the trout or the insects. The spring peepers should start singing their night song soon. They follow the woodcock, wood ducks and red winged blackbirds that have already arrived with their own songs and mating dances. There’s still ice on most of the lakes – quite a bit on some. On others, a few anglers are already hunting the edges for cruising trout. This is a time of year – like fall – that rewards those for being outside simply by how good it feels to be outside. Living and working up here, you have to try not to overwork or overfish. A shrink wouldn’t call this balance, but to us it seems right.