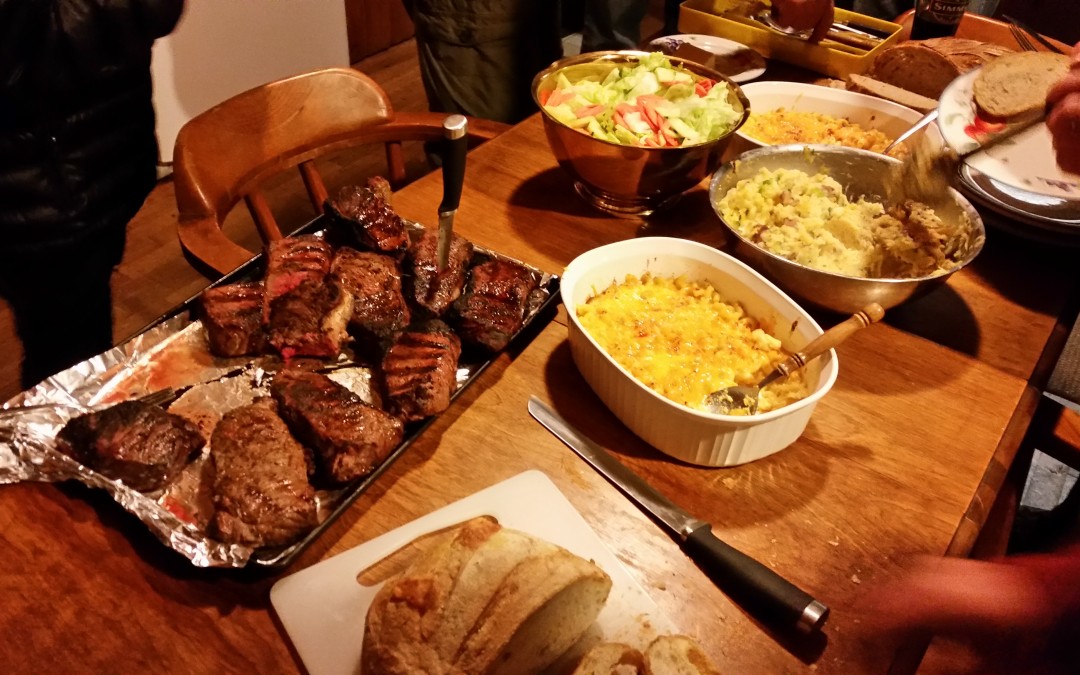 I don’t know whether it’s the fire, the meat or the beer, all men think they are experts when they stand in front of a grill.

I won’t use the word expert, but I’m confident in front of glowing coals, beer and meat.  I’ve probably cooked a metric ton of beef at this point and every time I witness the spectacle of a grown man drunk on hubris and rotten grapes, I offer my assistance and it is universally declined.

It happened again this year at trout camp, opening night.  Fine by me; I’d just gotten off of work and was focused on staying hydrated.

The usual suspects were gathered doing their usual things:  RT hit a walk-off home run after striking Tanker out during the year’s first wiffle ball game.  Skip was head-down, knee deep in dinner prep; manic.  The rest of us were working on solving the world’s problems and catching up after a long, absent winter.

And then it was time to cook the steaks.

The charcoal was released from the chimney, I think of Dante and panic sets in.  The grill grates were dirty and didn’t fit.  Waymire couldn’t find his glass of merlot.  Otis fainted. Cindy screamed.  Typical.

After the dust settled, Dave and I cooked 11 perfect strip steaks that were dwarfed by the bounty of food already on the table.  Bebow’s bread.  Sarah’s dressings.  Skip’s mac and cheese.  Skip’s potatoes.  Skip’s everything else.

It was one of the greatest meals I’ve ever had.  Not because we had the best ingredients or used the best techniques; but because everyone involved was passionate and generous and happy and grateful; the way it should be.

Whatever it is we do in the kitchen at Gates, we try to do it the right way, the honest way.  We can buy pretty good frozen cookie dough, and when they’re fresh out of the oven, they can pass for home-made.  But they’re not Emily’s cookies, made with care and with the ingredients you would expect… and I don’t have room in the freezer for a giant box of industrial diabetes.

As my buddy Tanker lamented while giving me the play-by-play on how to make his famous fish-camp breakfast tacos:  “Puttin’ Pace [salsa] in ‘ere would f*** it up.”  It takes five minutes to make awesome salsa.

In a perfect world, we would have the space and infrastructure to make our deli turkey from scratch.  Instead, we buy the best stuff we can.  Ingredients:  Turkey, Salt.  Made in Detroit and sliced fresh every day.

I like making bread, ironically more than Emily, but the cost associated with a new deck oven would buy a real nice cabin on the Holy Water; so, we buy our organic bread from Stone House bakery in Traverse.  Bread doesn’t get much better.

Honesty in food is either ebbing or flowing depending on who you ask.  Here at the Lodge, its flowing.

It’s going to be a beautiful weekend.  The first worthy of the descriptor and the first worthy of dining al fresco.  I got a call from my rep telling me he is going to have some red drum.  I’m not sure exactly what I’ll do with it; but it lends nicely to anything Cajun-y.  I’m thinking blackened with some kind of spicy fruit relish, probably mango and maybe some dirty rice.