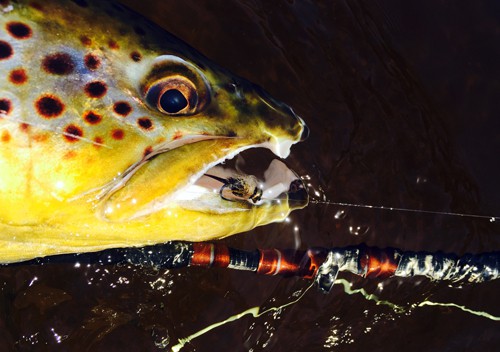 At least once a season I’m reminded that there’s something to just going fishing. I’m not talking about the pleasures of being out there (great though they are), but instead the idea that an angler should carry no preconceived notions to the river. There is no tactical plan — at least on the drive to the river — other than to try to catch a trout. Too often I decide on a technique without really considering the problem I should be solving.

On Sunday I went to a favorite stretch of spring river. Here, at times, the trout do eat the black stones. And here, at times, trout are visible on the sand for some sight fishing. But I still didn’t know what to expect, other than I would satisfy the urge to fish.

The water was stained and high from Friday’s storm. The water was too high to wade blindly downstream throwing a streamer. I’d drown, or at least get very wet. The river in this stretch is wide and rather bland. It does not set up well for indicator nymphing. So I decided to work upstream with a single, heavily weighted nymph on. I figured my only shot was to see a trout — either on the fin, or on the rise. And then, once I saw a trout, try to figure out how to catch it.

I waded upstream, which felt right not only for safety, but also because I was hunting trout, trying to see what they are doing. I think that wading upstream opens the river up to the angler, and shows the trout’s world without showing you to the trout. It’s the difference between listening through a wall, or looking through a window. 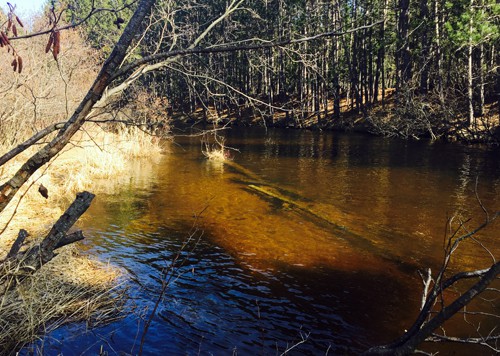 A perfect inside bend

I crept up along some tag alders and saw a trout. Well, I thought it was a trout. And given that the river was too high to cross, I figured I had only a bend or two to explore. Better safe than sorry. So if it is a stick, I thought, I’d fish as well as I could to it. And I thought I did.

“It’s a stick,” I told myself. And I waded up to the stick just to confirm. Which is when I got very lucky in that way anglers do too rarely.

As I looked away from the stick, I noticed a very large trout swimming downriver, between me and the bank. It passed less than ten feet from me. I didn’t want to move but I had to do something, so I threw up a hail mary cast from behind my head, the sort of over the back cast reminiscent of a basketball player leaping for a ball before it goes out of bounds and flinging it backwards wildly…and right into the basket. The nymph landed four feet in front of the fish’s path. The trout accelerated and ate it. I set the hook, stunned. Not often do big trout swim right at you. And less often do they eat.

I landed the trout and photographed it and released it. And just as I stood up to collect myself…a fish rose on the same bank, not ten feet upstream. I tip-toed over a few feet and saw him hovering over black muck. Another big trout. And overcome with confidence and adrenaline, I decided not to change flies, and instead plopped that same nymph down right on his head — stupidly, hurriedly — and, well, you know the rest.

There hasn’t been any one right answer out there. But unique challenges have presented themselves during this unique weather. This past week has seen it all, from a few rising trout, to some great streamer fishing, to some terrible streamer fishing, to great olives with nary a rise. One bluebird warm day follows another, and the promise of consistent spring hatches is accelerating rapidly. Matt and Kyle floated today and had two hours of fishing to a nymphing trout that even rose a few times. What had promised to be a nice float turned into a single, long effort to catch a particular fish. It even chased a streamer, twice, disappeared, and then resumed feeding. I put a snippet of the video on our Facebook page here.

Nate sent me this picture and a story that basically said that with one float in 2015, he’s already doing better than 2014…combined! Nice to get off to a great start… 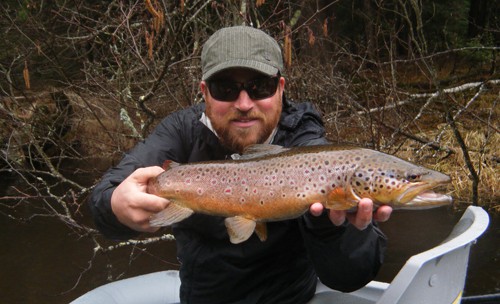 I think they had fun!

With water levels falling and water temperatures increasing to the 50 degree mark at the dock at the lodge, it won’t be long until we find some consistently rising fish. In the meantime, the streamer fishing has suffered due to the perpetually high skies, but even today I heard a few positive reports from anglers. The blue wing olives are hatching but again, with the bright sun, they are getting off the water too quick for these spring trout. These are perfect nymphing conditions (warming water, hatches, stained river) and working riffles and shelves with a double nymph rig, a tight line set-up, or even a dry and dropper, can be awesome fun. Later in the day, as the sun falls (the same could be said — to a lesser extent — in the mornings) the trout are willing to chase streamers. We haven’t been catching a lot. But this time of year it only takes one to make a day.

The Gates Lodge restaurant opens this Friday for dinner, and starting Saturday we’re open from 7 am – 8 pm, breakfast, lunch and dinner, until October. Matt and Emily have put together a great menu, with expanded take-out options (even for dinner). We’re excited for what is shaping up to be a great season!