Barbecue on the home waters 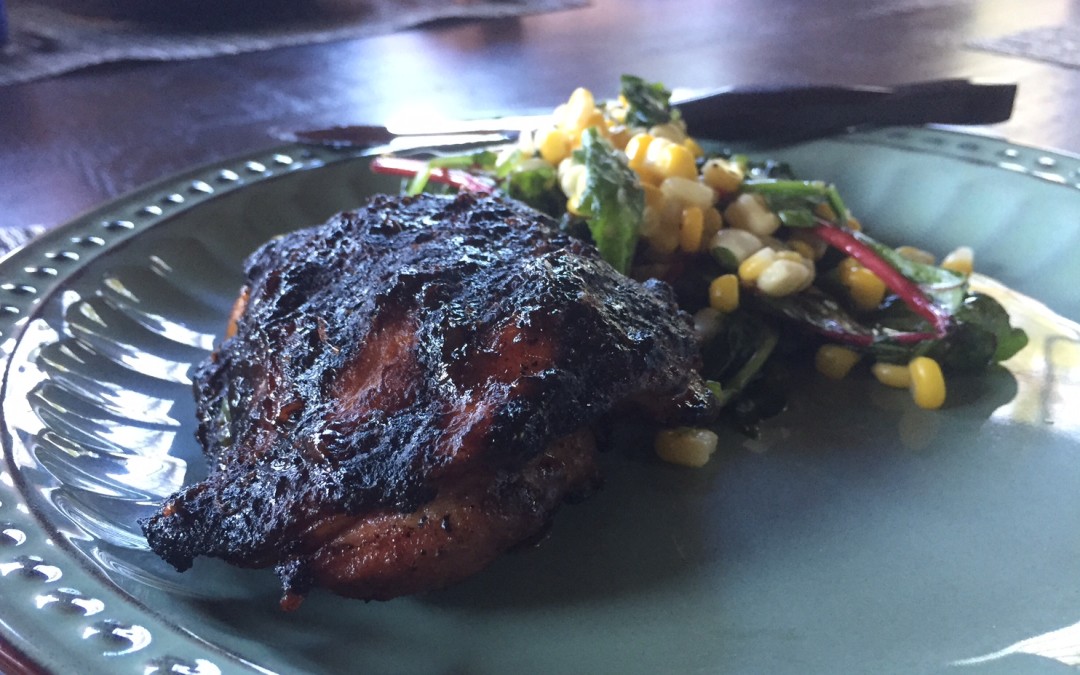 Getting an extra two hours in a day to do anything, let alone fish, is a luxury that I often can’t afford.  Thankfully, the stillness left by the vortex of a holiday weekend gave me the perfect opportunity to steal some of these hours, do some fishing and spend some time with my parents.

I had two identical nights on the south.  The same two big fish I had been chasing rose in the same two spots at the same time of day.  They would each breach the surface 3-5 times to the sparse March Brown spinners and quit the second anything smaller hit the water.  Oh well.

Instead going back for a third time, I figured I would cook dinner and fish the home water. I’m sure those fish were heart broken I didn’t show and most likely ate Sulphurs with abandon- their version of the missing man formation.

We had barbecue chicken and a big kale, corn, tomato and green onion salad.  There’s nothing I love more than to be able to cook at my leisure for people I love.  The salad is simple, but like most things simple, it takes some effort to make the ingredients really shine.

Tomatoes are usually still nearly inedible this time of year, so I opt for cherry tomatoes as they are allowed to ripen longer on the vine.  Sliced individually pole-to-pole I season them with salt and sugar and allow them to macerate for a bit.  While this is happening I cut the green onions and add them to the mix.  Kale is best when treated violently, so I crush it with my hands after salting.  It should look like a 4 day old left over salad.  The corn is roasted on the grill and removed from the cobb.  Lemon juice and olive oil complete.

Like me, if you’ve ever made barbecue chicken, you’ve probably ruined it a few times first.  For such a simple, ubiquitous American dish, it’s pretty tough to do really well.  A lot of recipes call for searing the chicken at high temperature and turning down the grill.  This is wrong.  This is why your chicken catches on fire and you end up serving it medium-rare.  Because of the skin, the chicken needs to be grilled at a lower temperature to coax the fat out while minimizing flare ups.

Another problem is with the seasoning.  The outside is delicious and charred and the inside is waste-land of bland.  Some recipes will tell you to brine the chicken.  This is only works if you have time to brine the chicken and then let it dry, uncovered in your frig for at least 24 hours.  Who has time?  A dry rub the night before solves the problem and doesn’t introduce any extra water.

Lastly, the sauce should be applied multiple times at a moderate heat to finish cooking the meat and to form a nice glaze.  Just add a coat, flip the meat, repeat every 4 minutes or so.  This also gives you a chance to have another beer before dinner.

Season the chicken liberally with kosher salt or your favorite rub and let it sit for at least 6 hours, up to 24.

Grill on medium-low, moving the chicken away from any flare ups.

Add the sauce a bunch of different times after the chicken’s internal temperature is 155.

Don’t burn it.  Put out flare ups by spitting beer at them… or just move the chicken.