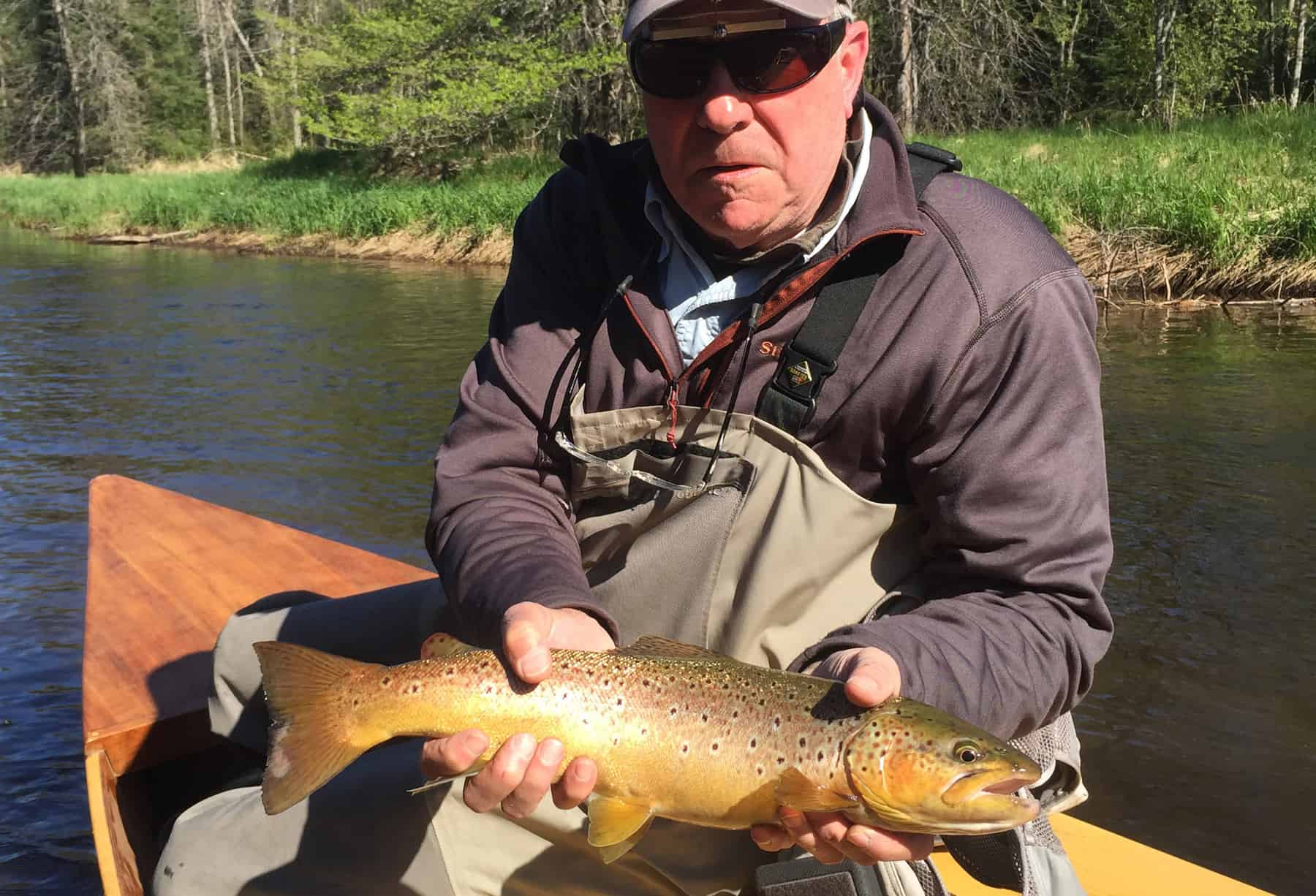 05/28/15  The sign at the lodge might say something about yellow flies — and it’s true, you can tie on a #16 Roberts Yellow Drake and just go fishing.  The sulphurs in both sizes are everywhere right now, on all three branches, on the Manistee, in the big waters.  The yellow sally stones are hatching from the riffles.   We’ve even seen some March Browns.  But when I think of this unique season before brown drakes, I think of evenings spent with brown spinners.  What some of us collectively think of as brown bug season: Borcher’s Drake (in good numbers tonight), male sulphurs, mahoganies, march brown spinners, Siphloplecton.

“Of course now we’re fishing purple for the brown bugs,” Dennis tells me tonight, speaking about the purple patriots.

Solving mysteries at dusk against the hourglass of light is an experience I’ll always associate with the second half of May.  Come drakes and hex, the light matters less than the sound.  But on nights like tonight, when the last rise was just a wrinkle in the moon’s reflection, a good sounding rise can be hard to come by…but that doesn’t mean they’re not rising. 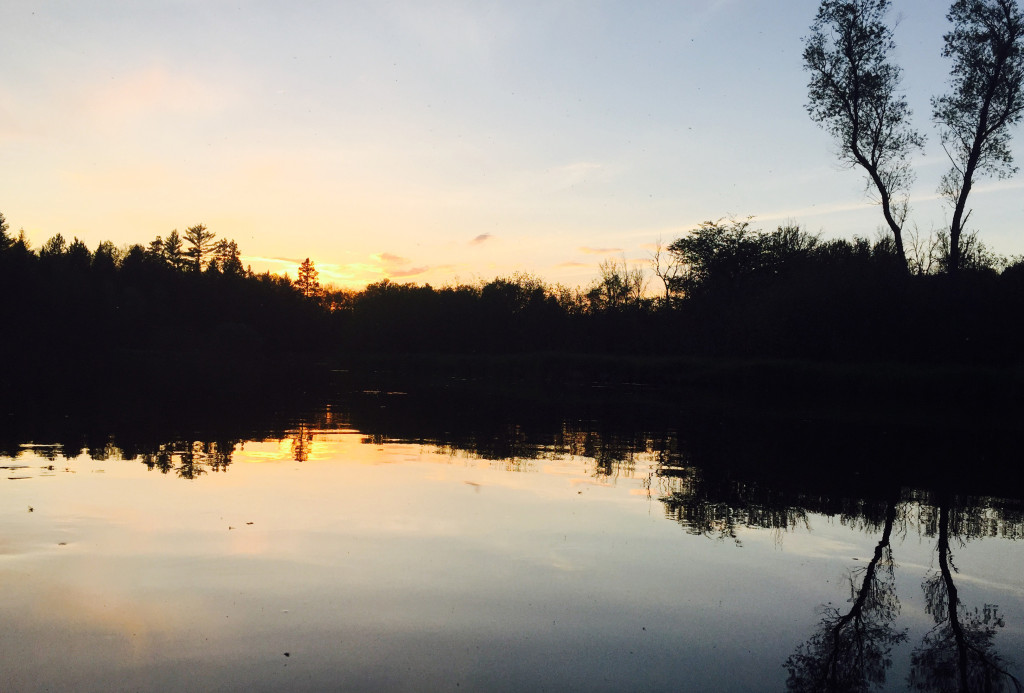 Spinners on the water at dusk

A lot has happened this past week.  On Friday we had a massive spinner drop and good to great dry fly fishing through much of the system.  Quickly though the weather changed, and rains came on and off through the rest of the week.  There was still some fishing — even some great fishing — but also some rain delays and even some rain outs.  Rumors of a tornado last night came with a big line of storms that left the rivers more off-color than high.  With dry and hot conditions for the next two days, the rivers should both warm and clear quickly.

We could see some drakes start to hatch by the weekend.  We could also not.

I don’t worry about drakes that much — it’s good enough right now to treat them as dessert.  Two nights ago Denny and I hit the river after a late night of ordering stuff for the shop.  We got to the water behind schedule and, as often happens on rushed trips, we became the unwilling players in a comedy of errors.  I forgot bugspray.  He forgot a flashlight.  I gave him one of my two flashlights, applied WAY too little of his bugspray, and we split up (he had some unfinished business with a trout upstream).  The light was fading quickly and the air was filled with sulphur spinners and already the trout were rising.  I will never say it sucks to walk into a river full of rising trout, but it does bring out the worst in people…or at least in fly anglers.  I heard a good fish rise and, turning toward the sound, sent my only flashlight flying from my hat bill and into the river.  As I tied a new tippet and fly in the fading light (squinting at the hook eye silhouetted against a spectacular sunset) the mosquitoes found me.  One accurately stuck its diminutive needle directly between my eyes.

The fish was a good one — good enough to dim the pain of the bugs.  It was rising beneath a tag alder, and leaving a nice bubble.  But it was rising only once every minute or so despite the blanket of sulphurs and it took a while for me to time it and even then it wouldn’t eat the sulphur.  With little hope that I’d actually get another fly threaded, I clipped off the sulphur and tied on a #14 Borchers, thinking that maybe this fish was ignoring the sulphurs completely and eating something else.

It was a handsome trout just big enough not to be feisty.  It leapt three times in the fading light.  Once I landed it, I noted that it had a hendrickson emerger impaled in its side.  Whoever had hooked it previously had been fishing Maxima Chameleon and the tippet, strangely, had broken a few inches up from the fly.  So I pulled both flies from the trout and, without light or bugspray, and happy enough at my luck, I headed back to sit on the truck tailgate and have a beer.

After a while I heard Denny coming down the trail.  He sounded like a man lugging a garbage bag full of water.

Apparently he’d hooked his fish, finally, and it was HUGE, of course.  It had thrashed and then run downstream and Denny in his pursuit fell into the river, submerged completely, and in the chaos had lost the trout. 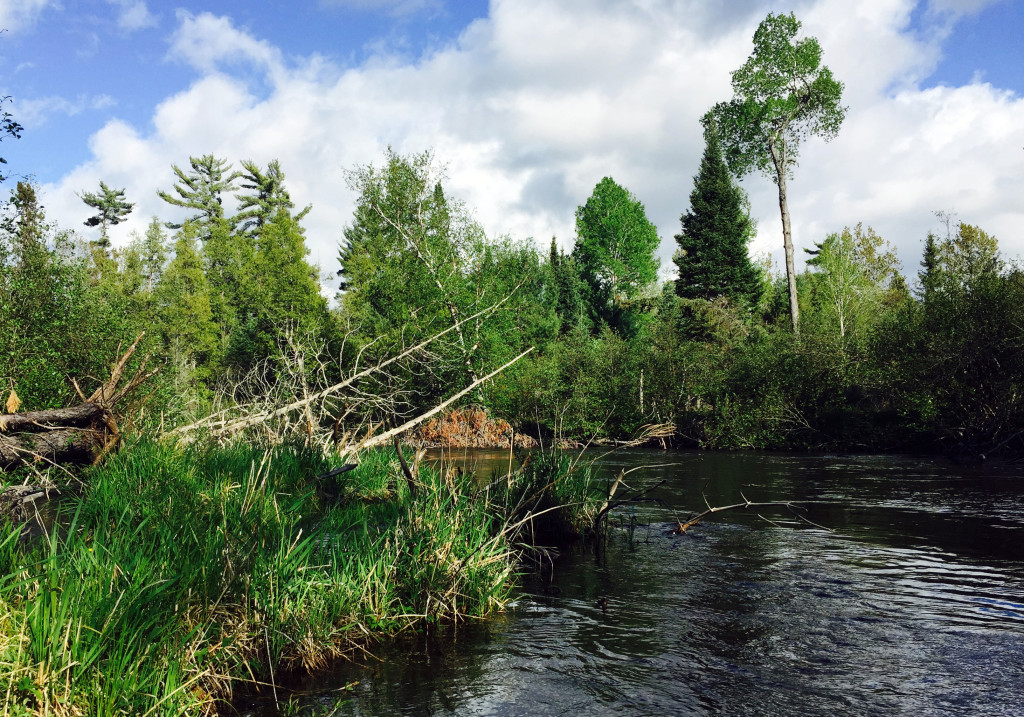 The recent rains brought spring to the river valley

It’s trout season, I guess is the point — even the slow days have something in store.  And as the rivers clear a brand new array of bugs await us: March browns, brown drakes, yellow stones, thrashers, isos…  The bugs of June are on the doorstep, and the bugs of May are at their peak.  The cooler weekend will push things toward the middle of the day, and make for some great afternoon dry fly fishing.  There will be few, if any, “off” days now, and the memories are starting to pile up…

Of Scott and Larry, who hit it just right with Matt and had an evening that I hope they don’t measure all future fly fishing evenings by!

Of a young angler that benefited from another Pay It Forward (anglers have been leaving rods and reels at the shop for young anglers) and, though he’d never fly fished before, got his first fly fishing set up, was able to join us for the Free Fly Fishing class this past Sunday, and by the end of the day, was tossing the yarn on the end of his leader into one of Mark’s hoola hoops.

Of rain that came at just the wrong time.  Repeatedly.

Of Tanker telling me that he could catch the fish I was casting to in far less time.  Thanks Tanker.

Of the head of a trout that Dennis and I saw tonight.  Holy moly.

And of the quiet times at the end of a night of fishing.  The singing frogs.  The half moon.  Marvin shared this quote with me from Jim Harrison, and I think Harrison is right:

a creek is more powerful than despair.

We have openings for this Saturday’s fly fishing class on dry flies and wet flies!  We added this class late and don’t expect it to fill but it is a great opportunity to hone your skills and diversify your abilities on the water from an expert instructor (Mark Hendricks, our lead instructor and teacher of this class, has been asked to be an instructor at the legendary Wulff Casting School!)  Both the dry fly/wet fly class and our new June 6 Casting Essentials class have openings.  Simply send us an email to book a spot!