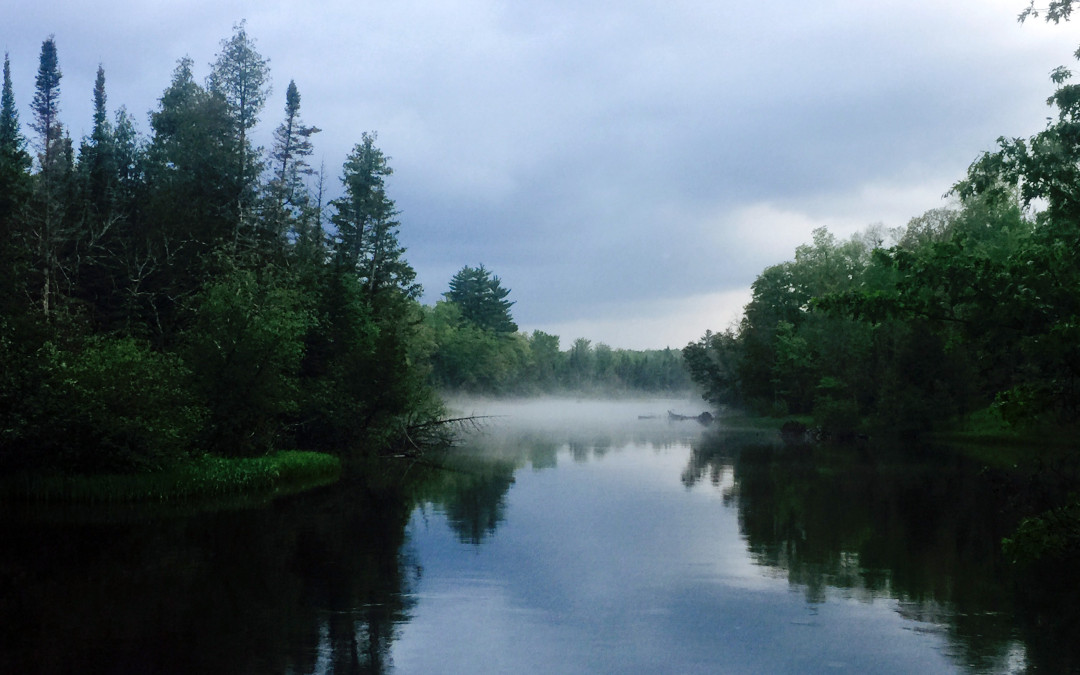 06/10/15 Drake week(s) has been full of great stories, wild up-all-night hairdos, tales of busted tippets and bent hooks, 16 inch-brook trout (seriously!), and some fell-out-of-the-boat stories.  People look crazy this time of year.  Ryan sent me a text at 1 am with pictures of he and Colin hoisting all sorts of trout.  There is fog on the water.  Colin is in a winter hat.  Some of the trout were quite large.  They look, as Chicago Steve described in an email about drake anglers, “like a couple of coal miners who found that leviathan in a deep, dark tunnel, and wrestled it up out of the shaft. Which isn’t all that far from the truth.”

Here’s a pic from Steve and Tom’s float with Pels, many hours before the drakes and the leviathan, sharing a first “fishbump”.  Connections are made over trout. 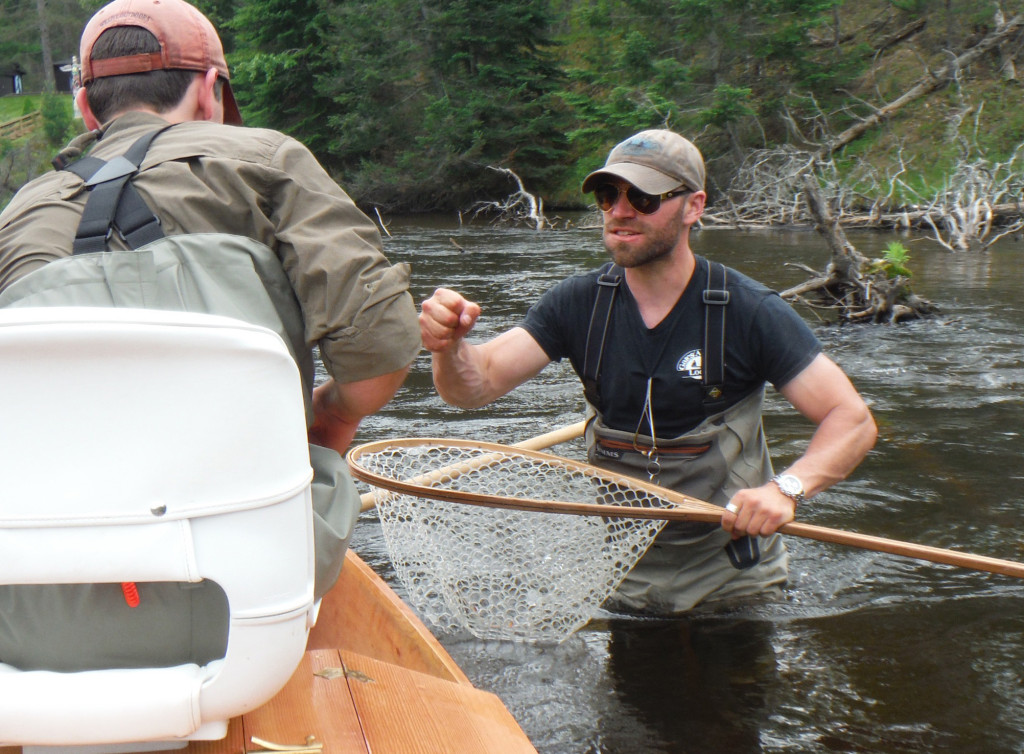 Where are the drakes?  Tapering in spots, just starting in others.  The Holy Waters and the Manistee should  peak thru the next week or so and they’ll still be going in those spots when the hex come.  Other areas, like the North and the South, will thin out quickly.  The drakes come and go.  They don’t wane so much as quit, grab their picket signs, and march around the muck for another year.  Where are the Isos?  Good question…up until now, they have been few and far between.  But folks in the know know that the week between — that which sits between the drakes and the hex — can be the finest week of the year.  We’ve seen some Isos…but there are many more about to come.

What is the Iso?  It’s a bug that is supposed to crawl up the banks and turn into a marginally important spinner.  What is the Iso on the Au Sable?  It’s a fat-bodied battleship gray size 10 mayfly with white legs that hatches out of the riffles and draws the very largest trout in the river system to feed like bluefish in the surf.  The Iso is a strong swimming mayfly.  They must taste like lobster.  When it’s on, there is no finer hatch or spinner fall on the river.  They seem to prefer crappy, cold days in June.  They don’t wait til dark either, preferring to show up at around 7 or 8 pm on the hot days.  They are a bug that should hatch in April, considering their curious predilections.  But they don’t.  They — along with the stoneflies and the assortment of March Browns, Gray Drakes, Borchers Drakes and Bat Flies — do their hatching before and during the hex hatch…that midnight melee that is waiting in the wings. 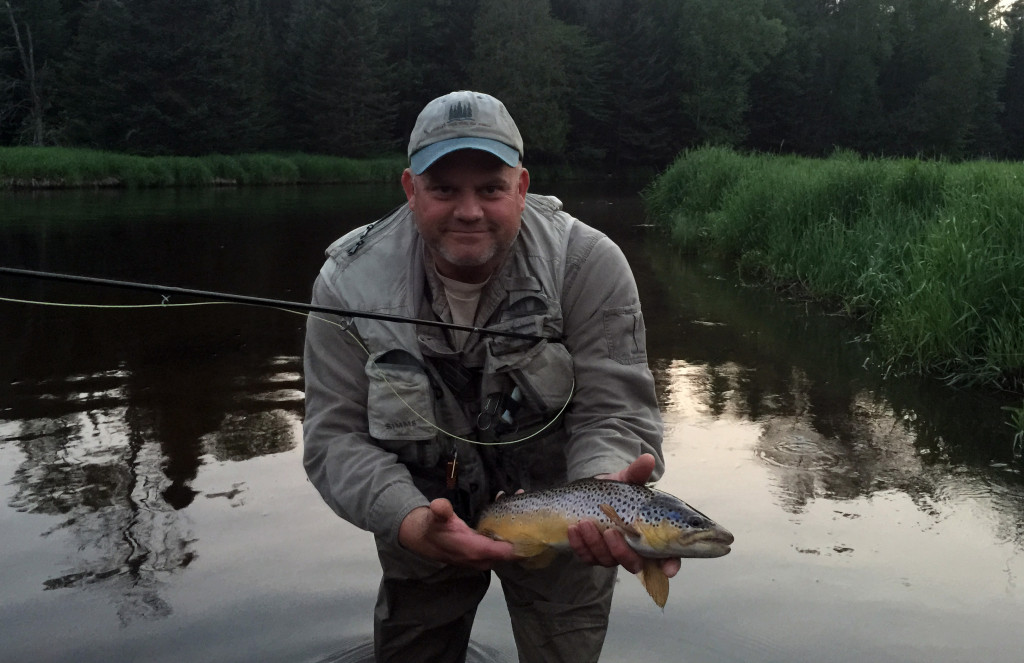 A fine trout that was feeding on something, but fed last on Tanker’s drake last night

We’ve been bogged down with storms and are anxious for some consistent weather.  Heavy rains muddied the mainstream but it is clearing and fish are rising again.  The branches absorbed the rain well.  The forecast is more or less perfect depending on what we get for rain on Friday.  For bugs — we’re seeing a bit of everything, including stoneflies in grand numbers.  Fish will get on these stoneflies — another riffle bug — which can mingle with the Isonychias and present some fast-paced fly switching.  They along with the drakes, March Browns, Borchers, various caddis, variety of lesser drakes, bat flies (a short fat mayfly — we have a good pattern for them) are more than enough to keep us busy, and finding rising trout hasn’t been a problem on even the slow nights.

I jumped the evening rise ship and went creeking today with my friend Andy G.  The 6-foot wood rod felt fine and snappy after several weeks wielding the 9-footer, and the trout, though not as numerous as we expected, were the fine creatures they should be in such a fine (though stained) creek.  Andy ties flies for the lodge and he’s got a new emerger that will be for sale next year if I can bribe him into tying it.  What a bug.  It isn’t pictured below… 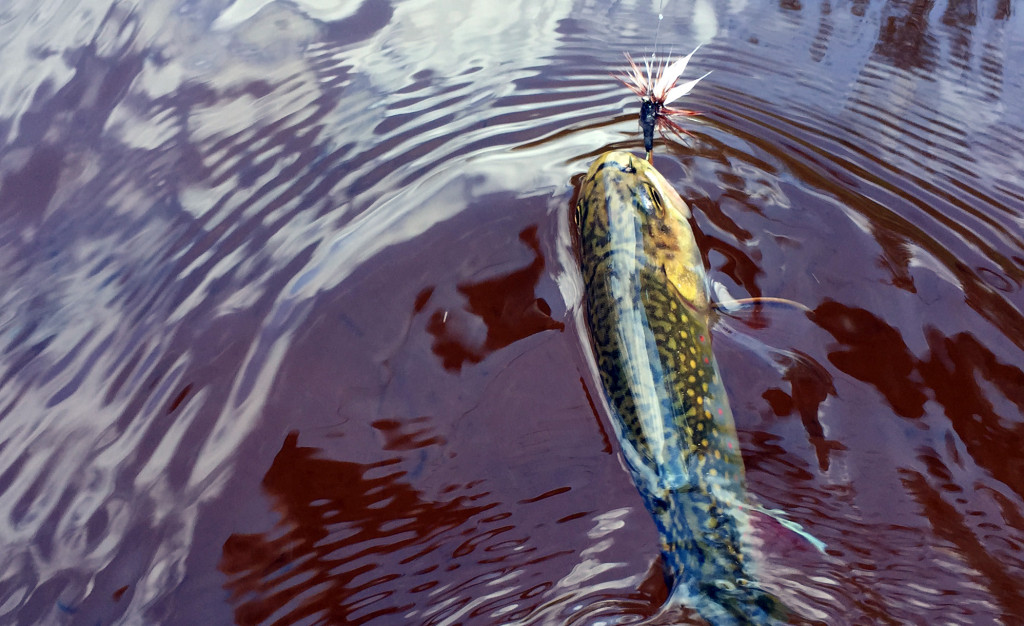 We’re nearly halfway into June.  I can’t believe it.  It’s a crazy ride being up here and watching the season progress.  The river comes alive in June — as does almost everything.  From the new fawns wobbling along the banks, to the carp flooding the shallows of Traverse Bay, it’s simply an awesome, affirming, slightly maddening and always interesting time of year. 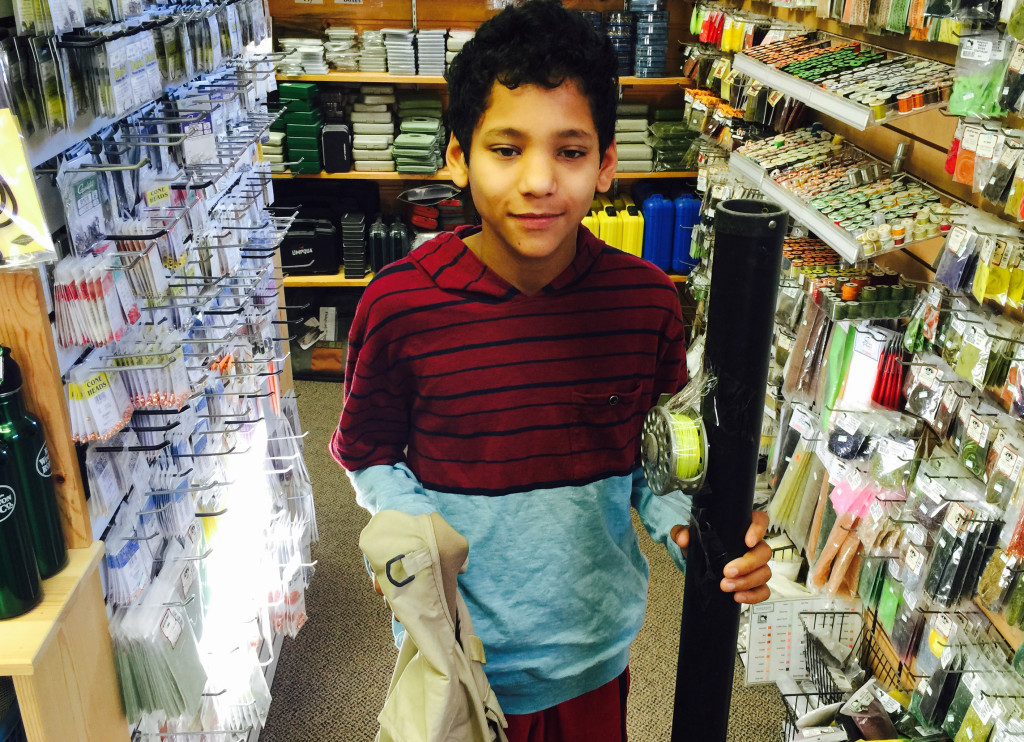 Folks keep giving, and new fly fishing youth keep getting.  This young angler got a vest, rod and reel to get started!