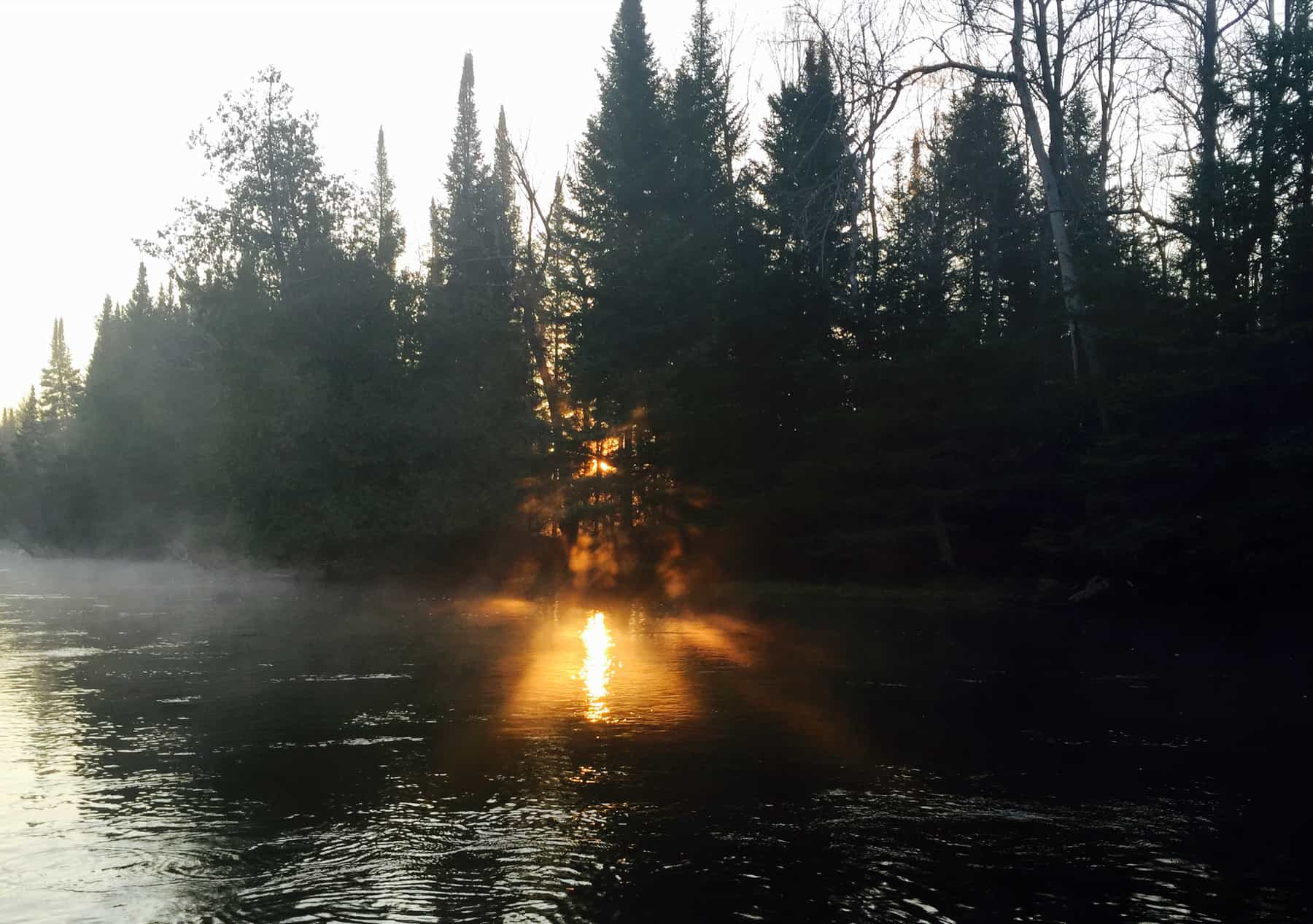 11/11/15  It’s possible up here, in the land of camps, to simply move from one camp to another in the fall.  Deer camp is a traditional northern thing.  For the last few years my deer camp has been in the Upper Peninsula along a cool horseshoe flooding on the banks of the Manistique.

I think camp is a state of mind: Aside from eating and sleeping, you expect of yourself dedication to a singular pursuit, be it deer, grouse or trout.  For the last five years, this week has been our streamer camp.  And while the week is no longer a week (2.5 days), and we sleep in cushy beds rather than in bunks, it’s still camp.

It looks to be a good streamer camp.  The big front — wind, rain, snow — is to hit tonight.  Perfect!  The clouds showed up just in time this afternoon to hide the sun.  First six sunny hours: no fish.  Last two cloudy hours: three nice big ones, the best of which slid from shaking hands before a picture could be taken.  Jordan found a nice substitute, though, on his float with Denny in his new (and lucky) boat: 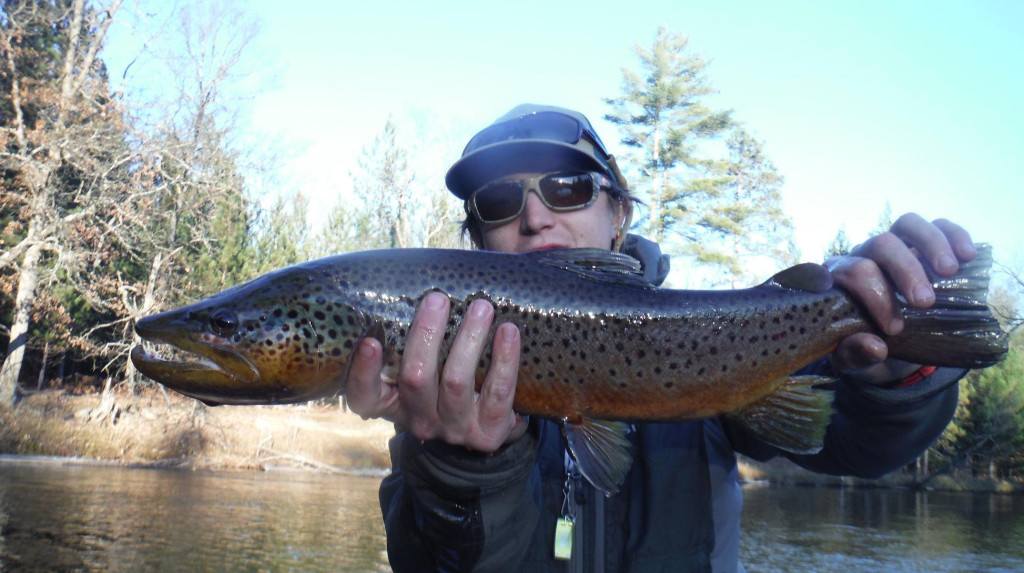 Jordan with a dandy brown

Today it was natural colors: olive, black, brown.  We moved fish on the bright stuff but they wouldn’t eat it.  As the weather grows dismal, the fishing should continue to improve. A lot of the fish are post-spawn now, and hungry.  This is one of the finest times of year to find big trout out on the feed.   Dark or natural colored streamers are usually the best.  Hit the cover and also the slower side runs.  Strip it a bit more slowly.  Bob the rod tip.  Let the fly move up and down without zipping out of there.  Water temperatures are cooling down quickly.  This doesn’t mean the trout won’t eat.  It just means they’ll take more time in doing so. 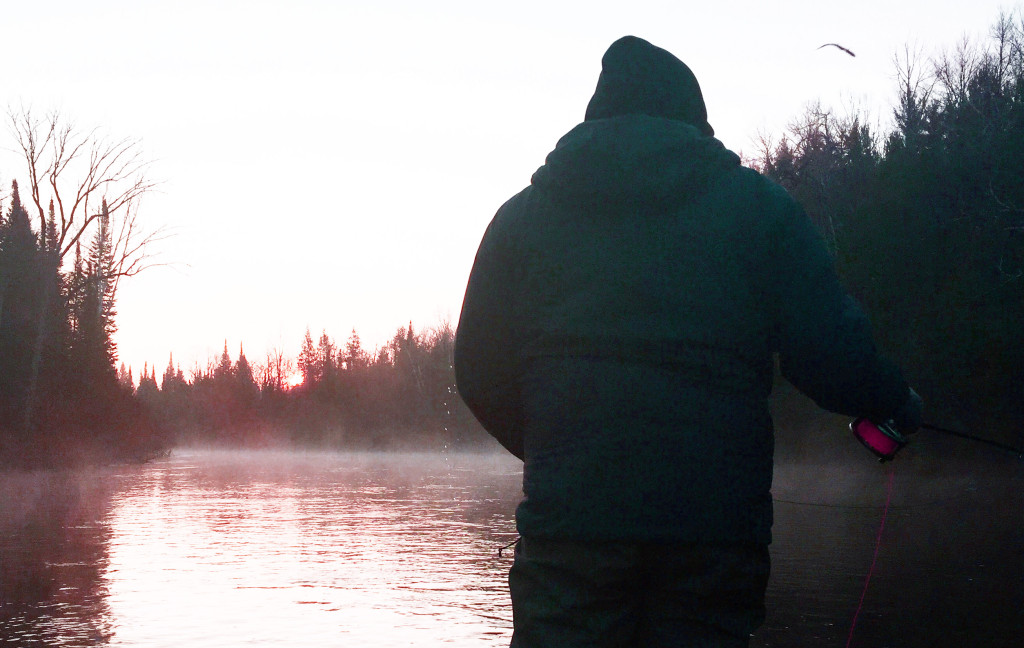 Greg’s streamer headed toward the bank

Nymphing will continue to produce from now until well into the dry fly season.  That’s six months of opportunity.   Not a lot of folks nymph fish the river.  I do, enthusiastically.  In some ways, it’s your best chance at catching a big trout on a small fly on the Au Sable.  Or, it’s fun just picking apart a pool.  There’s a meditative, gentle quality to properly dissecting a nymphing run.  Our postspawn trout love to sit on the inside drop-offs.  Start there.  And then explore the run. Change weight.  Try to visualize the unseen parts of the pool using your flies as a guide.  If your fly touches bottom at the same spot every drift, then note that it’s likely a shelf or ledge, and adjust your cast so your fly sinks along the contour.  Trout like to sit in such spots. 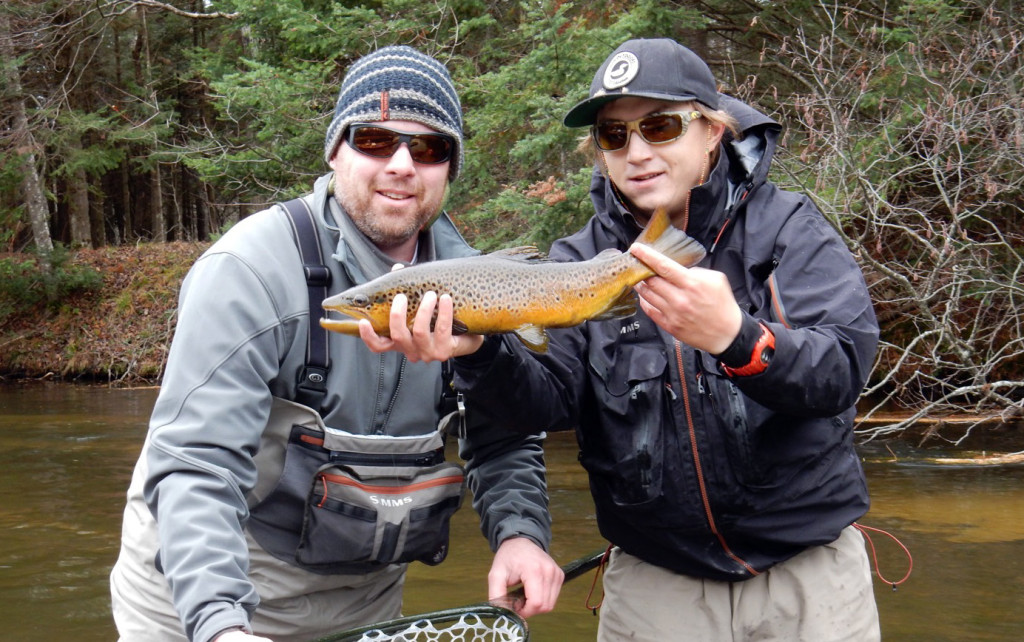 Mike and Jordan with a daymaker

Sunday is the opening day of deer rifle season.  If you’re planning on going fishing in the river, or walking the banks, please wear blaze orange…at least on opening morning.  The shop will be open everyday including Sunday from 9 am – 2 pm.  We have available rooms at discounted rates ($50 single, $75 double), and guides available most days.

Sign up for our print catalog!  It’s done and soon to ship:

We’ve been thinking about it, and thinking about it…so we did it!  It’s in print and ready to ship.  It’s our first, not perfect, and we ran out of space for some of the promised musings!  Tons of cool gifts, gear, and other stuff.   We hope you like it!