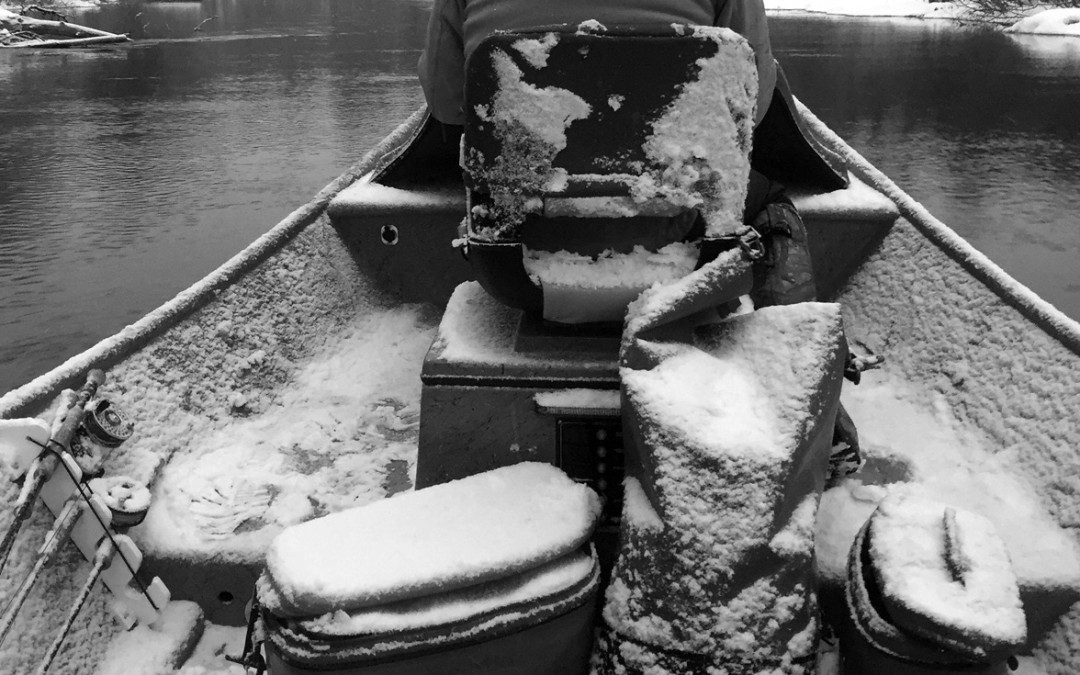 Free Fly Tying Saturday, February 6, 9 am – 2 pm:  time to gather the vises and get cranking once again!  This is a free event that is open to everyone, from folks who have never tied a fly, to those who have tied one too many.  If you don’t have anything, we have a vise, tools and materials to tie with…and a patience instructor to help you on your way.  Please RSVP.  Hope to see this Saturday!  More info here.

02/03/2016  Nature is big in a winter north of the Ohio River.   It daily creates obstacles that prevent your progress in a way that seems diabolical.  When we launched the boat on Tuesday we did so knowing full well what we were in for.  And the trip proved worth it at the halfway mark, as I flipped a streamer toward a wood wall that we said owed us something, as wood walls in trout streams sometimes seem to do. This wood wall reminded me of this guy that used to come around the lodge and fish with us young shop rats, guides, whoever.  He was a character.  Owes almost everyone up here a $100.  This guy had more IOUs than flies, which he’d also ceaselessly “borrow.”   To this day, one of us will say, “remember so and so?”  And almost everyone that works here will say, “Yeah, he owes me $100.”  But he was a riot to fish with.

Well this was the trip that I almost got my $100 back, with interest.  I flipped it at the wood wall, thinking all you do is take take take, and the wood wall gave.

It was a big twisting trout, with huge fins, which is the first thing I notice on a big trout.  It swam across the bow, then cut back upriver, upstream of the boat.  I worked it back toward Matt, who had the net ready.  I lifted the rod to lift his head, and the fish tussled against it, and rolled, and the hook pulled.  We were that close.  I lifted the rod too early.  I knew I did.  There is nothing better to do on a rolling trout than to get the rod tip down until the very last second.  I thought it was the very last second.  But it wasn’t.

But we all know that landing a big fish is just the icing on a much more significant cake.  And I think sometimes to the bad spots in life, when things are going wrong, when all you dare ask for is to just see such a trout come after the fly, let alone eat it, let alone run upstream, let alone almost get in the net.

We made up for it with a couple of fine trout, a couple nice chases, and the big nature.  As it has been all winter, pale was the color of choice.  Copper and black didn’t do much.  Light olive did.  They wanted it fished low and slow, on a heavily sinking line instead of my usual floater.  They wanted to come from the middle/tail-out of the pools, or from the black muck deep water on the sides of the river.  This meant much of the river really wasn’t fishing well.  All the fast water was void.  I don’t know if that’s because the fish aren’t there, or if they are there and don’t feel like chasing across all that current.  Either way, they wanted dark-bottomed, slow, deep water.  And when we found that water, we found some trout.

It wasn’t the best weekend for trout catching.  Saturday really didn’t live up to expectations.  Sunday was a bit better.  Tuesday fished well — that was the day we floated.  And today some fish were found.  Andrew sent me this one from his afternoon wade: 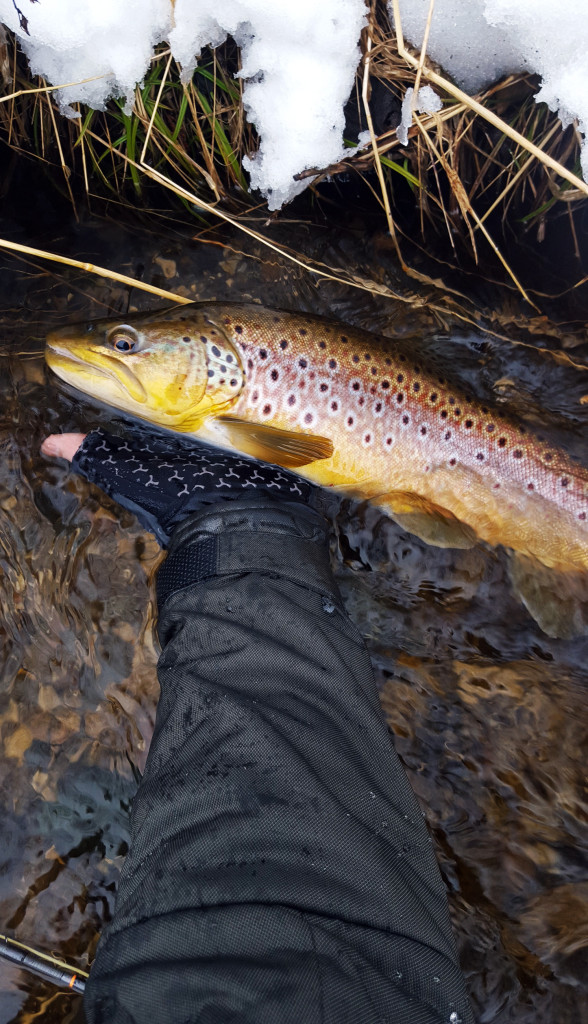 And he sent me this as well: 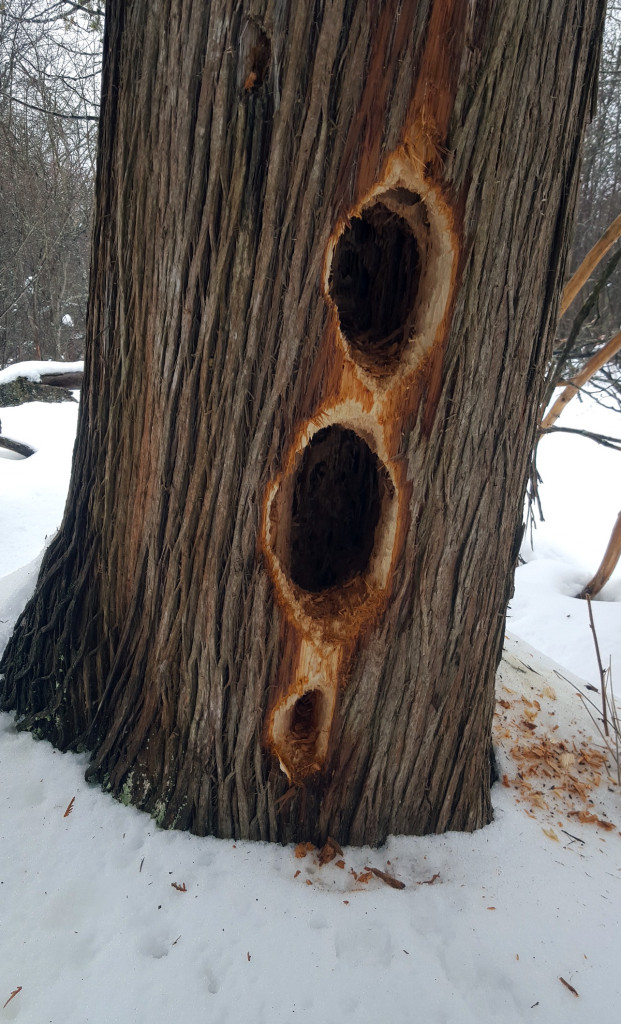 Which made me think of this from my Tuesday float: 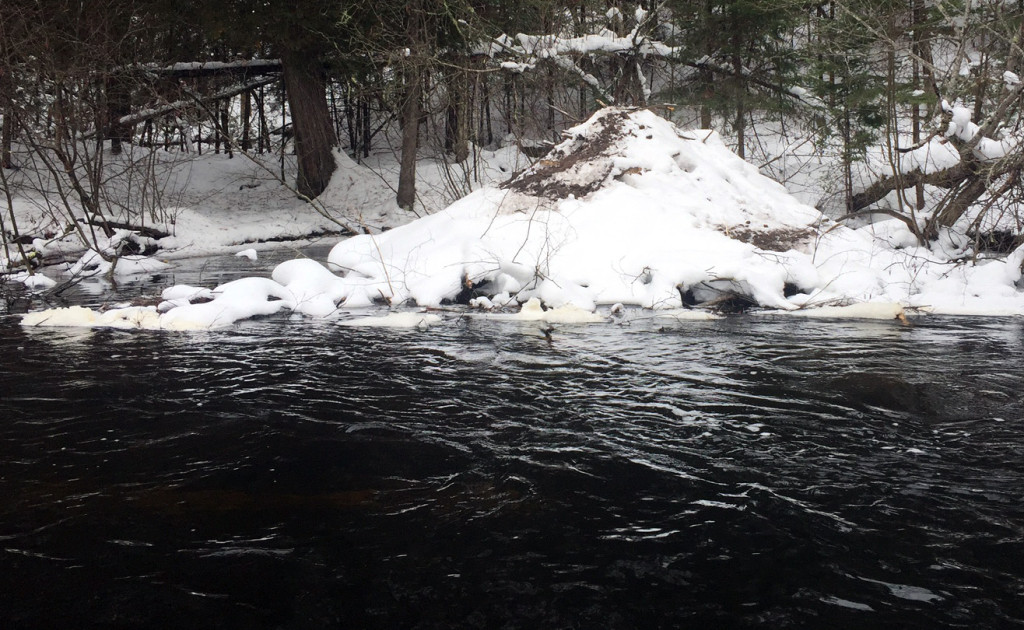 Pictures shrink beaver huts and trout: this thing was tall as me.

Which made me reflect a bit more on Tuesday.  It began snowing around 3 pm.  By the time we were hustling to get off the river, the wind was whipping in our faces and the snow was sticking to us.  We’d left the truck somewhat near the access, as you do in the winter (see last week’s report) and realized that my tow chain, which felt about -111 degrees, was about thirty feet too short.  By this time it was getting dark and the sticky snow had rendered my glasses white.  We unlaced the frozen anchor rope, and lashed it to the front of the boat and then to the chain, and connected the chain to the deployed winch strap, and then heaved the boat up the snow bank until it could all be connected and drawn tight.  And that was the easy part.

Driving home was a complete white-out.  It took an hour to drive 15 miles.  When we got to my house it was blowing and pelting, and I covered the boat just before the snow turned to ice.  Later, in the warmth of inside, I thought about nature, winter, and fly-fishing.  As I sat there thinking about it, Jordan and Denny texted me from inside their deer blind/ice shanty.  They were jigging for walleye in the dark in the middle of Lake Margarethe, their little heater blaring, the wind and snow and ice snapping their blind.  Probably giggling like kids playing a prank on someone.  I guess maybe on nature.

We’re playing by winter rules and winter rates: $50/single and $75/double.  This weekend is supposed to have highs near freezing, which is as much as you can ask for in February.  It’s a great time of year to be in the water.

Sign up for our spring catalog!  If you received our fall/winter catalog, then you’re already on the list.  If you didn’t, and want in, email me your mailing address, and I’ll make sure you get one.  It costs nothing, and will have gear reviews, our 2016 spring/summer catalog of events — including a new line of fly fishing schools and fly tying workshops, and enough fishing stuff to get you revved up for the next season. 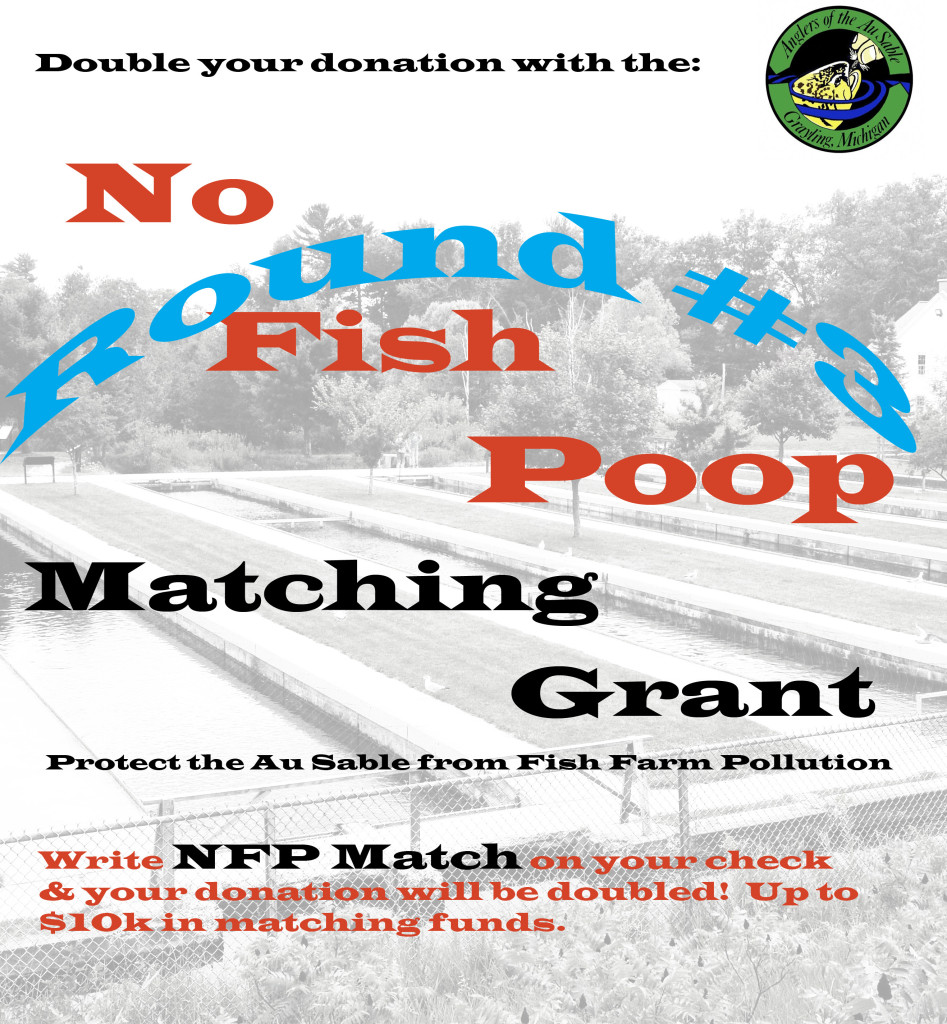 Matching Grant #2 is Fulfilled: on to Round #3!

We raced through Rounds #1 and #2 of the No Fish Poop Matching Grant to help fund our legal opposition to the permit for a fish farm located at the old Grayling Fish Hatchery.  Riverview Lodge has stepped up with $5k in matching funds: this gives us another round at $10k!  We’re racing toward that goal now.  This has been a humbling experience, and Katy and I are backlogged processing thank you notes.  We need A LOT to make this happen — it starts with all of us saying no to a permit that aims to treat the Au Sable like a septic field.