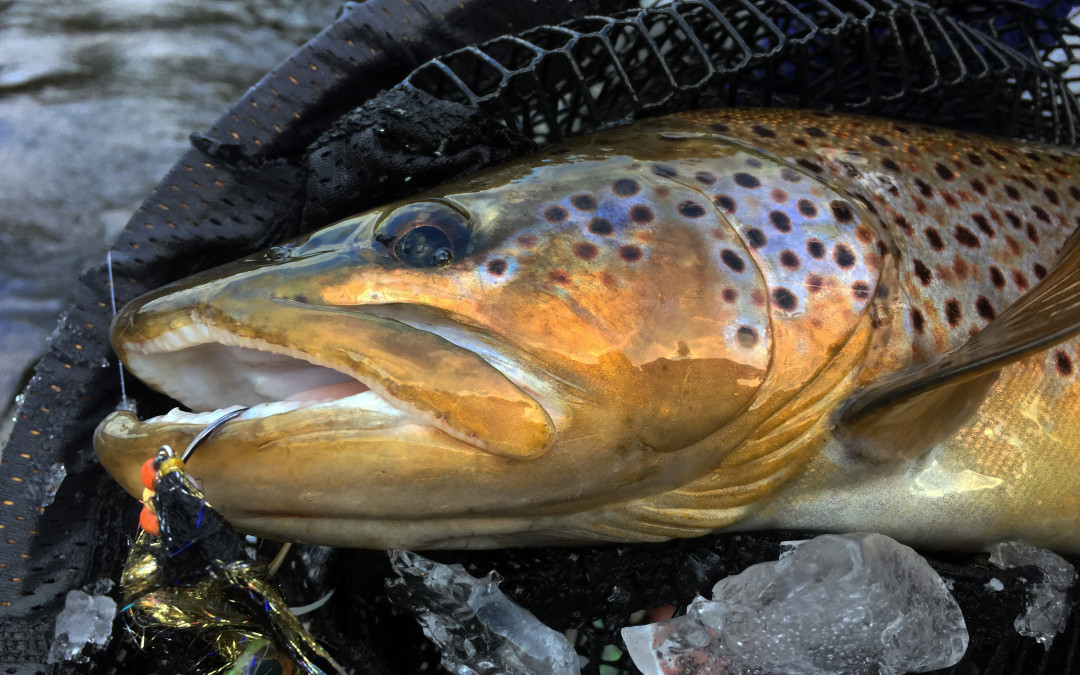 02/10/16  Eventually winter was going to remember that it was still boss, and knock us down a peg or two.  The Au Sable valley is a cold place.  If the overnight low is supposed to be zero in Grayling, it’ll be -10 at the lodge.  And if the low is supposed to be -10, it’ll be -25.  And so on.  The coldest mornings are the clear ones, when the sun hangs over the bare woods, and you doubt there is much of an atmosphere between you and outer space.

The uptick to all this is that February is nearly half-over, and the 10-day forecast shows a return to our mild 2016 weather patterns.  Why do we care?  What difference does it make?  Well, I like to think about rising trout.  And knowing what I know about March and April — how merciless they can be — it’s nice to think of a full-fledged spring rushing at us like a size 14 comet.

But this winter has been gentle, and though the fish farm case and business in general (and getting older and being responsible-ish) have halted my never-say-die years of daily ski-fish, we’ve been sneaking out at least once a week and enjoying the ice-free guides, the clear water, the scenery, adventure, and trout.

My buddy Kyle is back in town, and so Matt and I got him in the boat as soon as we could for a float.  The high was 40 degrees, and the launches and take-outs weren’t too bad.  The sun poked out as we launched, and for the first couple minutes or so, as we push-rowed down to the “better water” we kicked fish off the sand that had been enjoying the feeding in low light.  That first fifteen minutes was magical.  We saw a turkey taking a bath in the river, a black mallard, a pileated woodpecker, trout, whitefish, deer.  And then, by the time we got down to the better water, the sun was out, the sky was bright, and the river seemed empty and quiet.

We found one pike that fought hard, as river pike do: 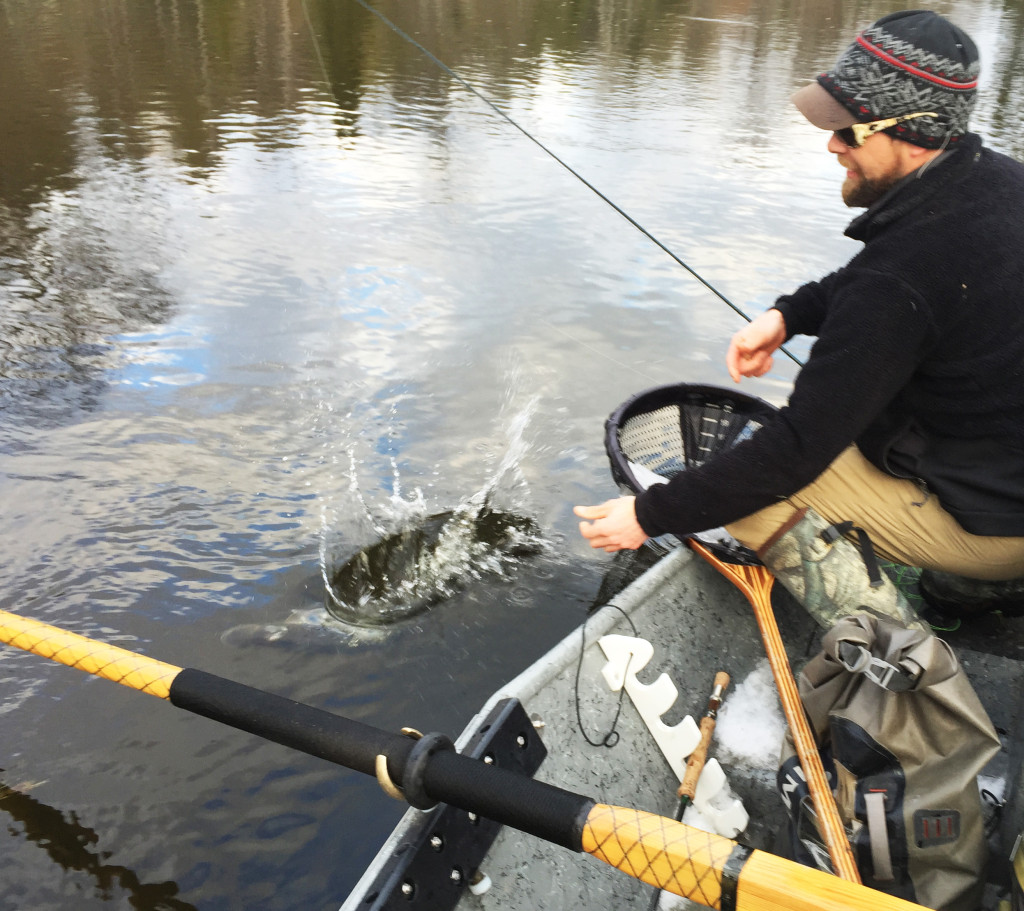 But more or less it was dead quiet.  We went through the roll-call of streamers and ended up where we began, fishing lighter colored streamers that were easy to watch swim, alone, back to us.  Streamer fishing can be like playing fetch with yourself.

The sun went behind the trees a bit.  The river valley went dark. 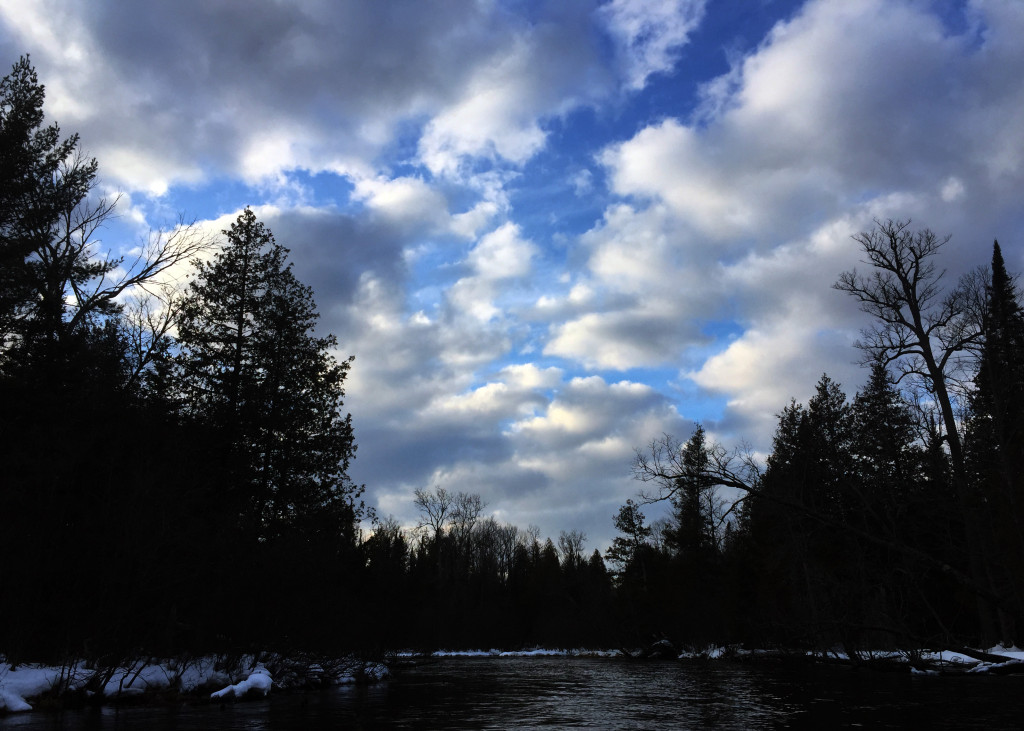 And then Kyle caught a fine trout from the inside of a bend.  It was just the right type of water, and a proven spot in the winter: a slow inside with plenty of current and submerged cover, and a railroad-tie retaining wall.  i get the feeling that during the average day in the winter, the trout willing to chase a streamer are in 5% of the spots you cast to, and about 1% of those are ready to feed.  That there are long stretches of river that simply aren’t right.  Either the current is too fast, or the water is too deep (and a fish on the bottom is probably content to stay there, eating nymphs), or it just doesn’t jive.  These percentages increase upstream in the smaller water, where there are simply more fish.  But even there, it’s the same old stretches of river, the same current speeds, depth, and cover, that the produce fish.  I know these are sweet spots…I get it.  But there are clearly trout in other places.  And I can’t help but think that there’s a lot more to be learned about how to present flies to trout than what we know.

On Monday, the Anglers of the Au Sable’s court case began.  It’s been a long road to this point and I know that we — meaning everyone who has stepped up to help — has done everything we can.   There’s more to do, and our fundraising and letter writing efforts continue without cease until the permit is overturned.  But pins and needles prevail as we sit here basically waiting on the first decision on what the river is, what it’s there for.  Is it a dilution system for private waste, or is it a clear cold trout stream?  It’s a fantasy to think it can be both.

More detailed reporting will be available on this site, as well as at www.ausableanglers.org and on the Anglers of the Au Sable Facebook page.

Sign up for our spring catalog!  If you received our fall/winter catalog, then you’re already on the list.  If you didn’t, and want in, email me your mailing address, and I’ll make sure you get one.  It costs nothing, and will have gear reviews, our 2016 spring/summer catalog of events — including a new line of fly fishing schools and fly tying workshops, and enough fishing stuff to get you revved up for the next season.