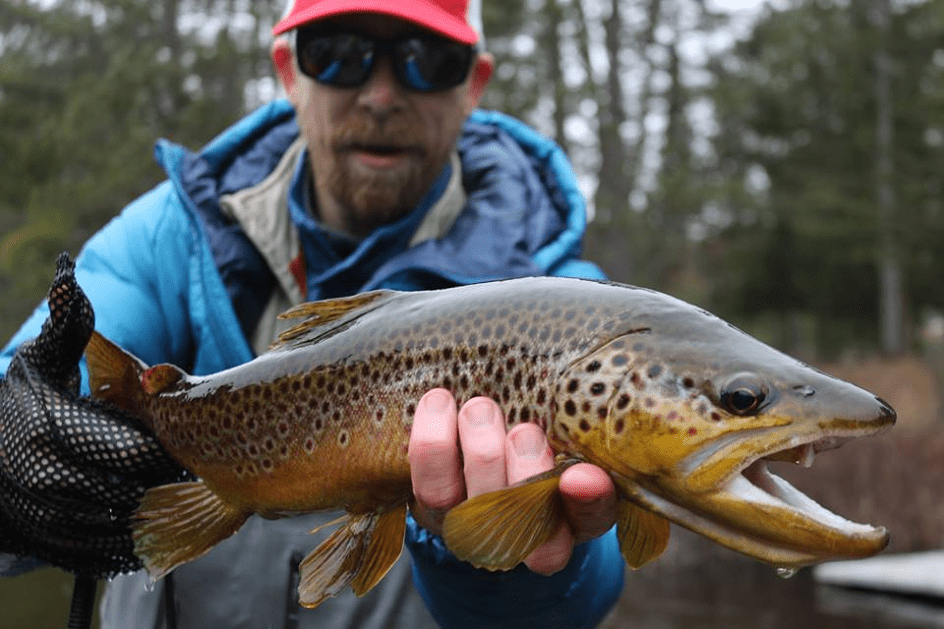 03/16/2016  In boxing, they call it ring rust.  It’s the edge you lose after time away from the river.  After a winter of fishing from the relative security and ease of a watercraft, and after a great but exhausting weekend at the Midwest Expo, I headed to quiet waters this late afternoon for a little streamer wade.

The conditions were perfect: high, stained water.  Spitting rain.  Howling wind.  These are big fish conditions.  Robins poked around people’s yards.  Ducks scattered in their 45-degree ascents.  The walk to the river was wonderful.  No crunch of snow, and fresh deer tracks in the mud.

It was a scary slide down the bank and into the river.  The river there was belly-deep and pinched.  The water clarity about two feet at best, and only when looking straight down.  Looking toward the bank, I could barely see into the water at all.

I started with a fly called a Thin Mint, and then began switching rapidly.  White, cream, yellow and olive, black.  Along an alder bank, I had a small poke and a swirl at the end of my retrieve.  It wasn’t much, but it was something.

The river widened and shallowed and I took my time working first one bank and then the other.  The wind was everywhere, in no defined direction, and I had the accuracy of a cross-eyed gunner.  Tree.  Branch.  Bank.  And when my streamer did hit the water, there were the many grasping hands of logs, hidden by the turbidity, waiting to fool me into setting the hook.

It was a tough day to figure.  Most days have this prevailing sense of something.  There are, rarely, the days of great luck…when it seems that all that can go right, does.  There are days of sublime beauty.  Of great laughs.  Days that, for whatever reason, are seemingly filled with optimism.  And then there are days that just sort of exist, waiting for definition.  These sorts of days are the most dangerous.

Approaching an island, I had a phone call.  I checked my phone, didn’t recognize the number, muted it, and slid the phone back into my layers of clothing.

I then cut to the left of the island, and entered a sublime little pinch. Along the promising inside bank, I had a great take.  I set…nothing.  I cast again.  Again a tug.  Again nothing.  One more time.  I cast.  Tug.  I set the hook, and my rod broke at the first ferrule.

After determining that the fish was gone, I stared at the break. It was clean, the female ferrule empty, the male section a shard.  I tried to shove the broken ferrule back together but it wouldn’t stick.  I was too far from the truck to walk back, and the water in the side channel was too good to skip.

Which reminded me of one of my favorite brown drake stories. Steve K and his girlfriend Jo had hit the mother of all brown drake spinner falls one evening in the gentle water outside his house.  The trout were rising everywhere.  Big ones.  Steve hooked one such big one and, in landing it, broke the tip section of Summers bamboo rod.  Rather than lament, he ordered Jo to go back to the cabin and fetch his second tip, because there was a big sumbitch rising by the far dock!

A broken rod didn’t define the day.  And it wasn’t the first time I’d fished with a broken rod.

After fiddling a bit, I decided that holding both sections in my right hand would allow me to cast the now 7-foot 6 weight passably well.  I used section above the stripping guide to handle the line.  The shorter rod, I thought, actually allowed a better side-arm cast under the tag alders.  It was a happy improvement.

Near the bottom of the island, the river was split by one of those old CCC log structures.  This created a V of water between the structure and the bank, shaded by a stately willow.  It had to be.  With the shortened rod I was able to sling a cast beneath the willow.  On the second strip the line came tight and I was hooked to a dandy, leaping brown that clearly made the day.  I got it to the point that it was merely twisting below me, I absently tried to switch rod hands to land it, lost my top section for a moment, lost the trout, and then just stood there, lost.

I reached for my phone to take a picture of the V, and the side-channel, where the rod had been broken and the fish lost, and discovered that my phone was not in my wader pocket, jacket pocket, coat pocket, pant pocket.  It had not slid down into my waders.  It was not resting, for whatever reason, in my hood.  It was gone to the river, the big flooded river, and such was the day.  A broken rod and a lost phone, and with it a whole bunch of pictures, some of which were meant for this report.  Thankfully my friend Rob supplied the top pic from his Sunday float, and it’s a lot better pic than any of mine anyway (lost though they are).

Round two is tomorrow.  Same river, just a bit lower down.  I’m looking forward to it, and I won’t have to worry about being distracted by phone calls!

We’ve seen a pile of stones and have heard reports of blue wing olives though I didn’t see any this afternoon.  There have been confirmed reports of trout rising.  The next seven days look cold, but not too cold.  The snow is gone and the river is very high.  The South Branch is out of its banks, and the mainstream is pretty tough to wade.  The North Branch from Lovells down to Dam 4 is wadeable, and will improve rapidly by the weekend.  We are at the height of run-off, with swamps existing where, in a few months, ferns will be growing.  The Main and North will clear early.  The South Branch will be high for quite some time.

This is a great time of year to hop in a boat (your boat, or with a guide) and chuck some streamers!  If you would like to book a guide trip, give us a shout.  You might only see a few fish come to the fly, but most of them will be dandies.

A big “thank you” to the Michigan Fly Fishing Club for hosting another tremendous Midwest Fly Fishing Expo.  What a blast!  It’s also such a kickstart to the trout season.  We’re busy restocking the shelves from the weekend, and getting ready for the new year.

Help Wanted: Gates Lodge has job openings in the restaurant!  Especially looking for folks with some food prep or cooking experience but really will consider anyone with a good attitude.  We’re open from April 15 thru the end of October.  We do have options for housing.  If you’re a whiz cook and want to spend your afternoons trout fishing this summer, give us a call or send me an email.

Anglers of the Au Sable: Visit ausableanglers.org, join or contribute, and receive fish farm updates as we enter our third week in court.   All donations go 100% toward our efforts in overturning the DEQ permit.  If you have questions about the case, please don’t hesitate to email me at [email protected]