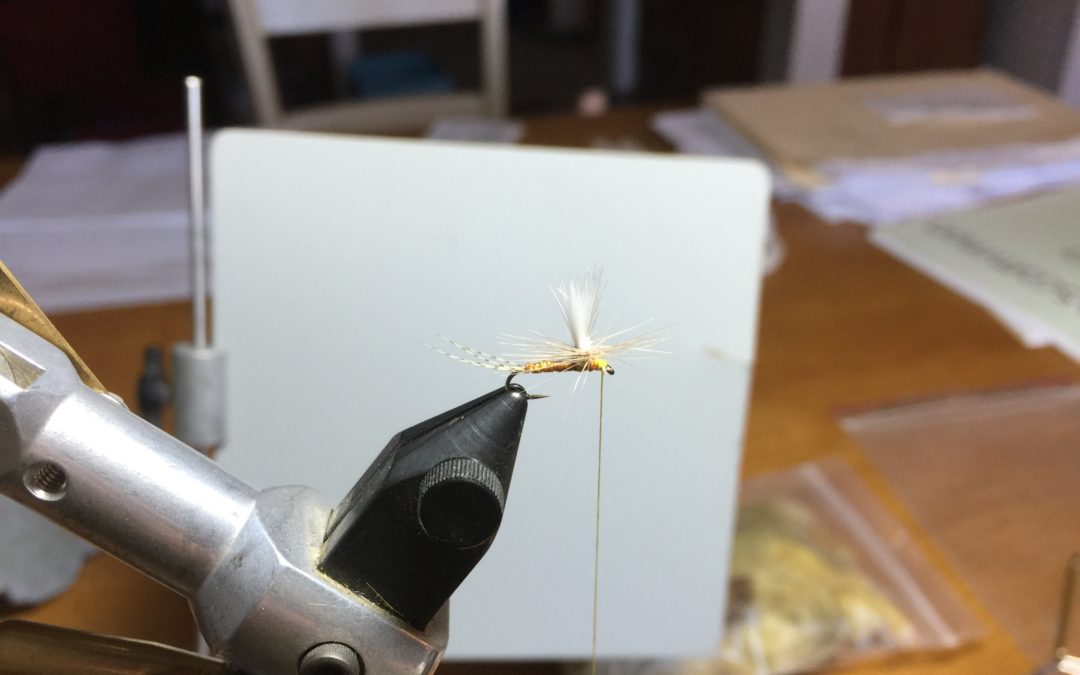 Yeah, yeah, they’re the same darn thing.  The yellow-winged sulphur aka the light hendrickson.  Size 16.  Nice proud wing.  This bug has the excellent — to us — quality of hatching on cold, clear evenings when it’s obvious the spinnerfall isn’t going to happen.  This fly makes use of the Veevus body quill, in brown, and uses the yellow thread underbody to give it the yellow glow when it’s in the water. 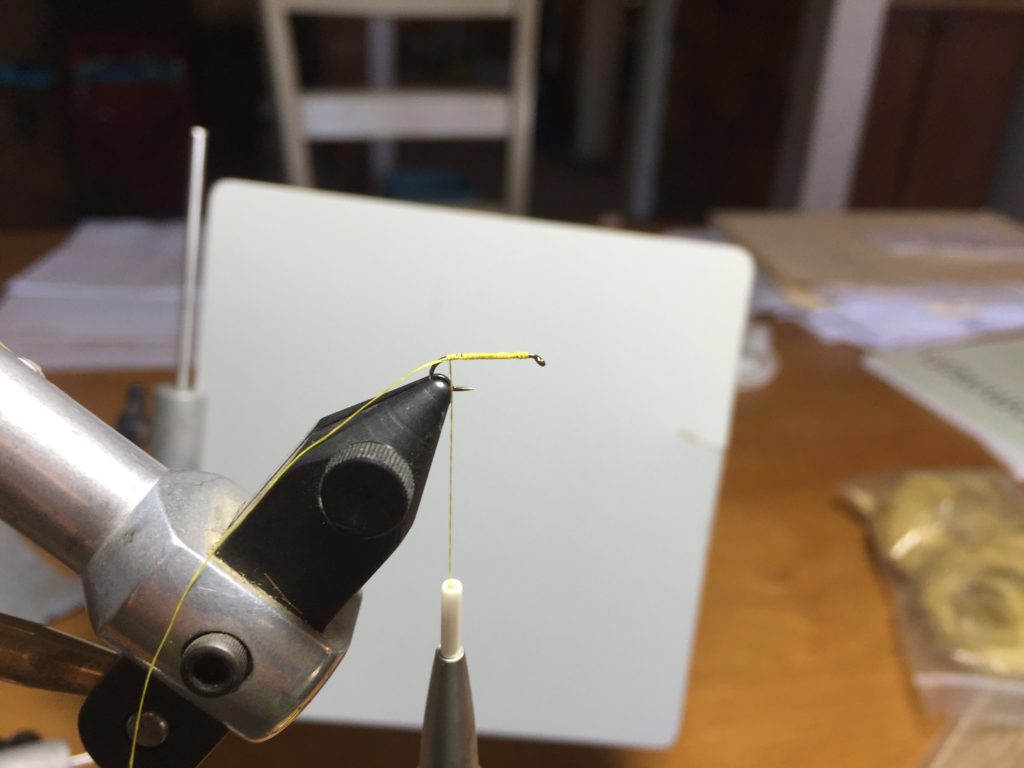 Start thread and leave a tag.  In order to save a step, when I start the thread on this fly I cover the shank evenly and without gaps.  Since you’re relying on the thread to form the body, you want a little build up. 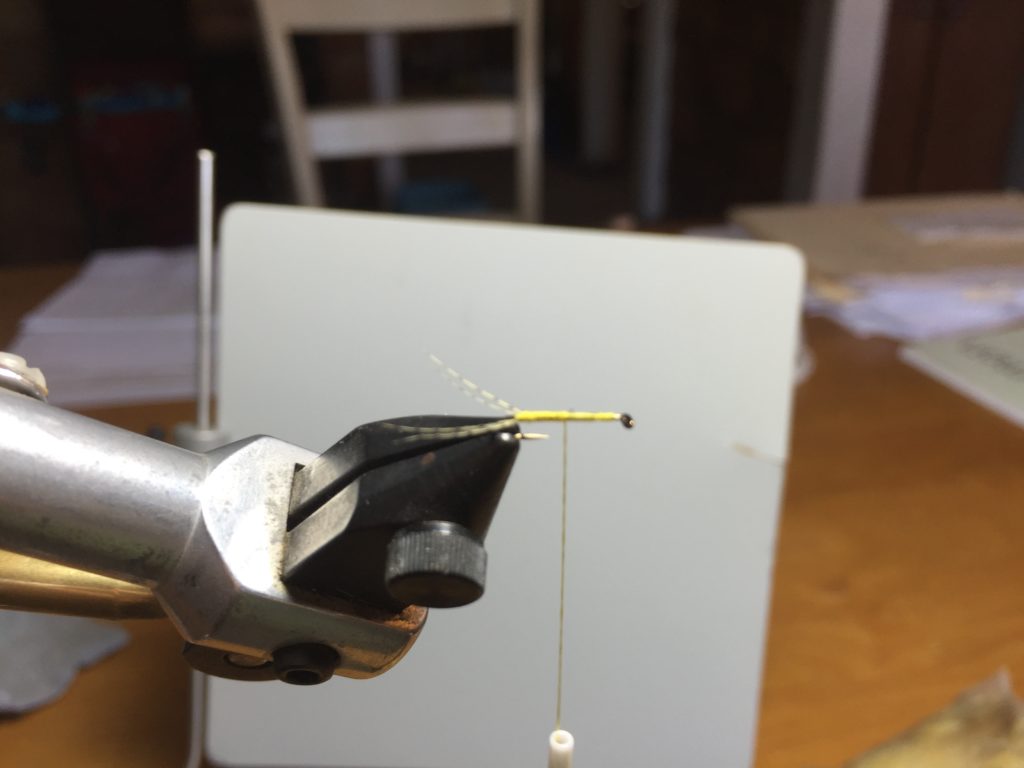 Tie in the mallard (about hookshank length) and split it with the thread.  Now wrap evenly back up the hook shank.  These repeated trips up and down the shank are building a nice even thread body without creating an extra step. 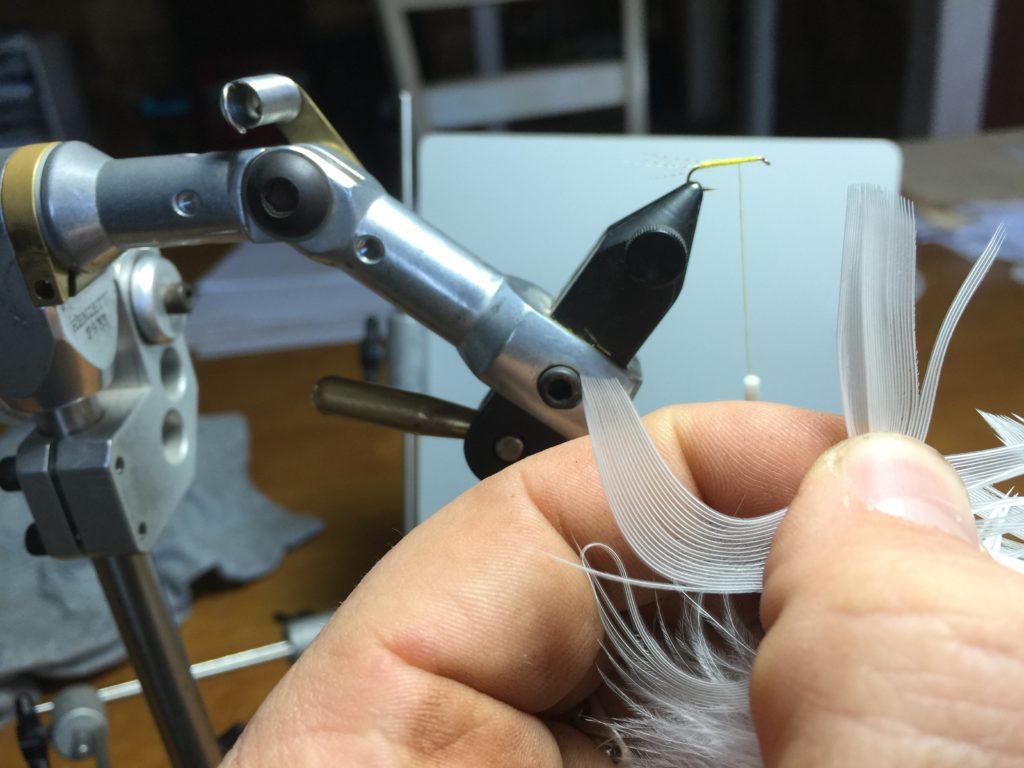 Take a turkey flat and separate a wing.  I use the good stuff up near the top of the flat, on either side of the stem.  There was no better way to describe it other than to take a picture. 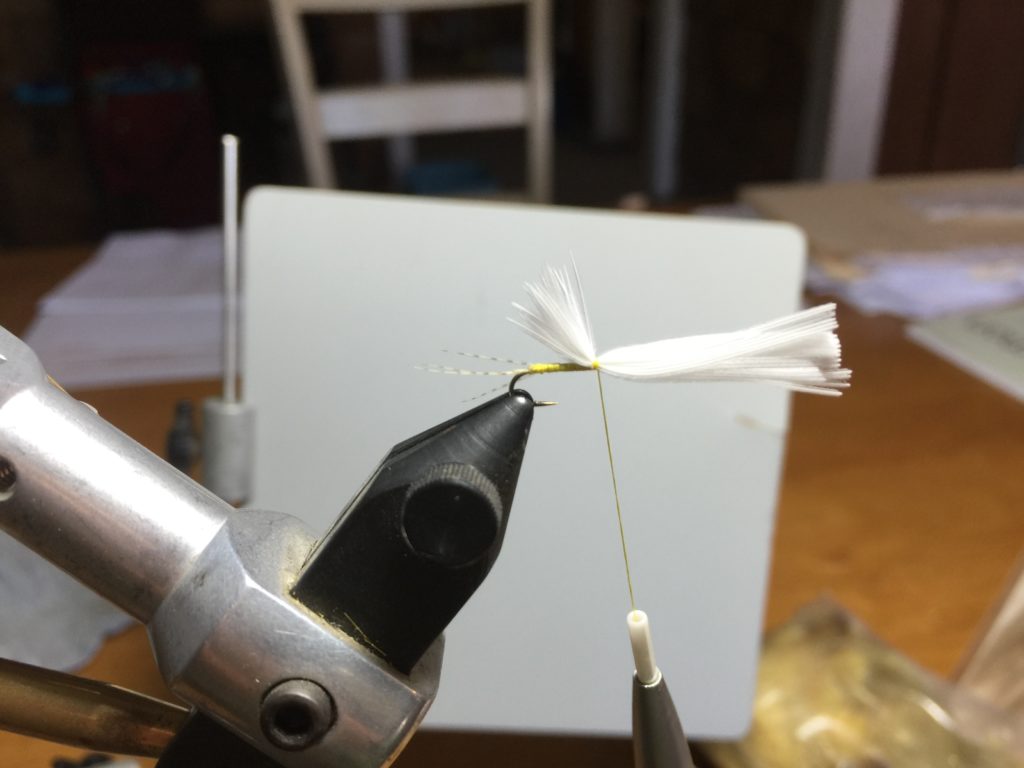 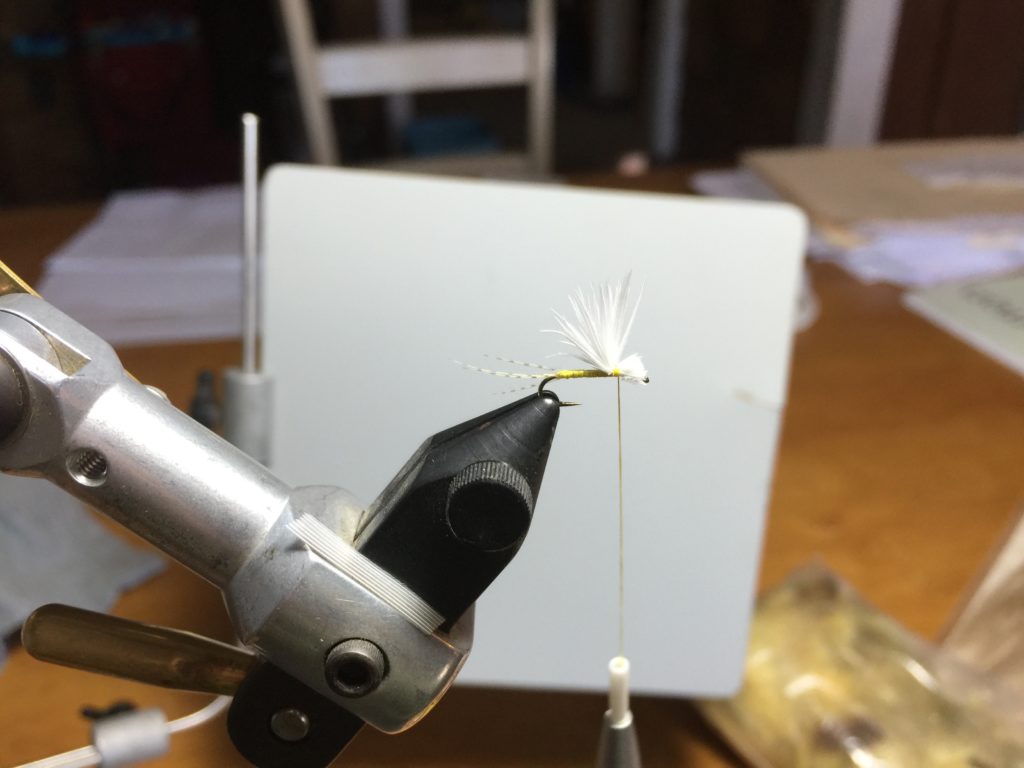 Clip.  This little trick will make a much more stable base.  You’re going to wrap your thread around the cut piece and the wing piece, forming a solid foundation for your soon-to-be parachute fly. 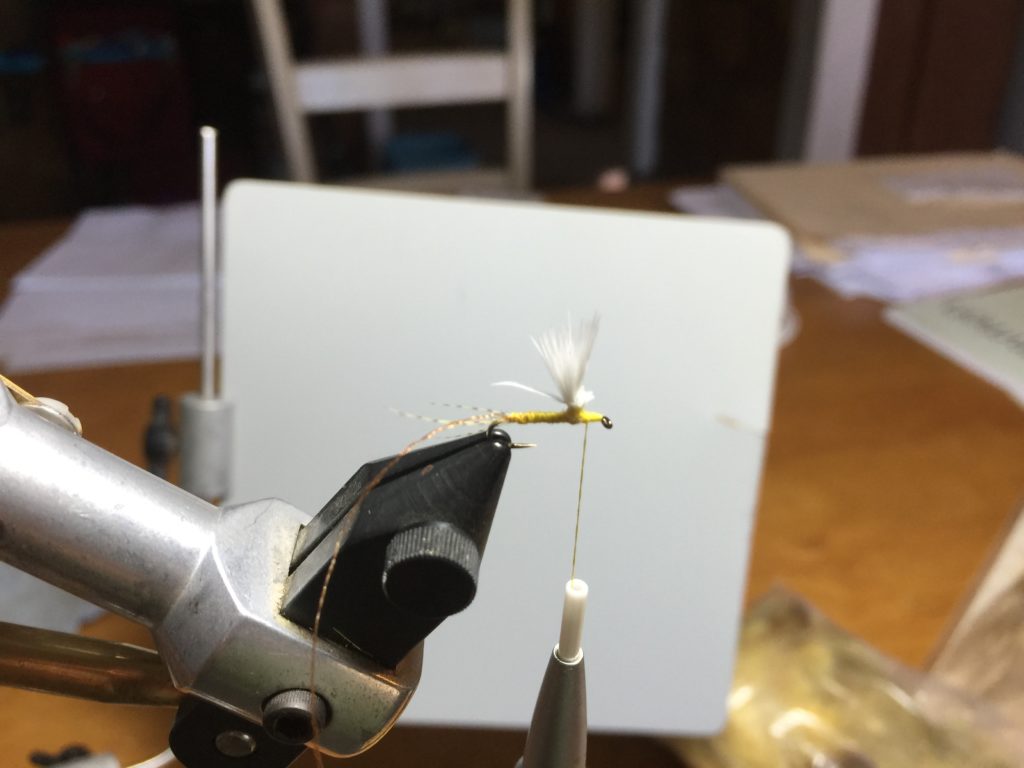 There are two steps here.  First, the post has been made by wrapping both the butt ends and wings together with thread.  Second, the thread has once again traveled down the hook shank and tied in the Veevus quill.  The thread has now returned to the front of the post. 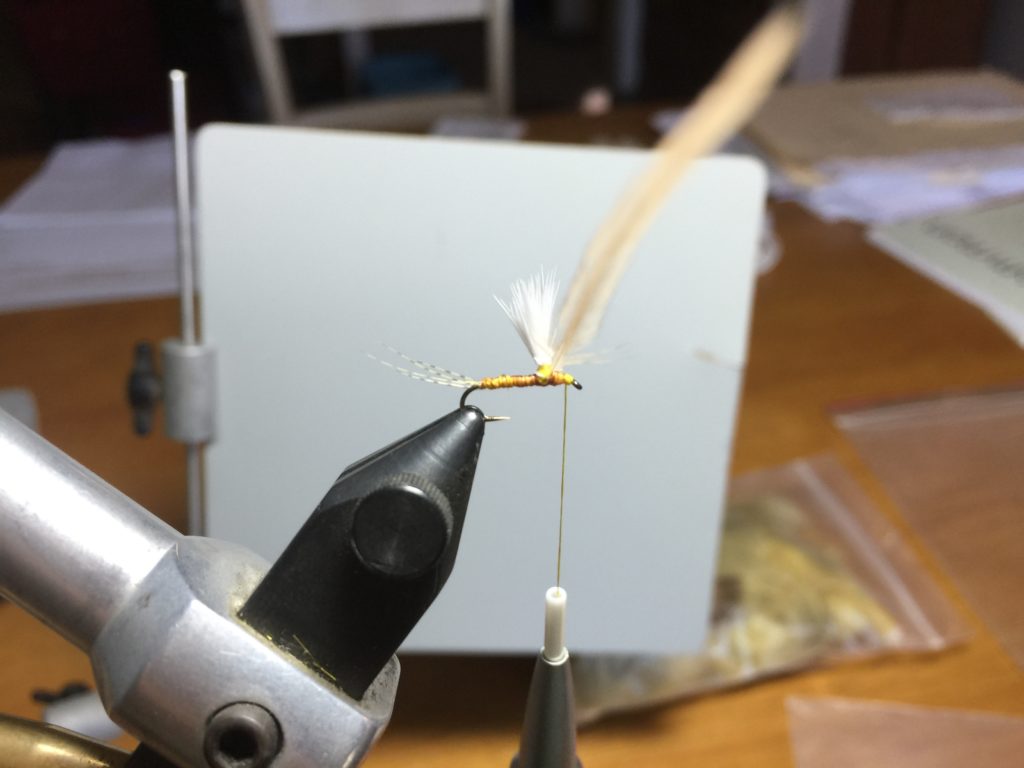 Tie in your hackle and leave thread in front of post.  Then wrap the body quill up the hook shank and around the post, creating a nice even body color.  Tie off the quill, and wrap the hackle. 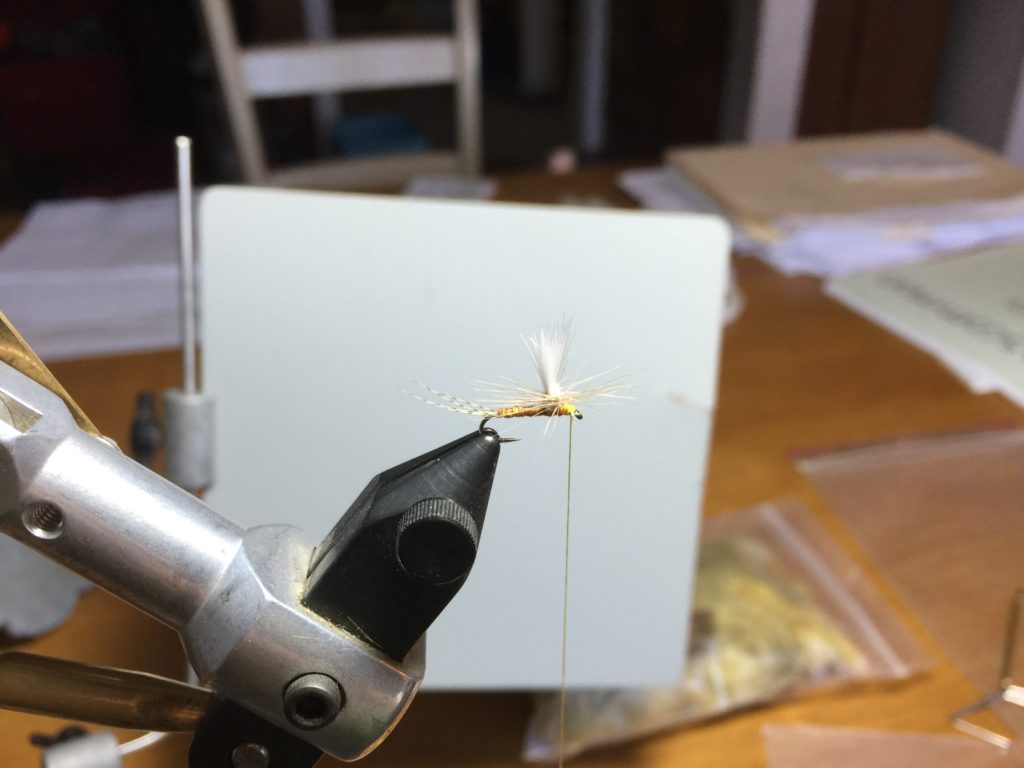 Here’s the completed fly, ready for the whip finish.  This simple parachute works both as a dun and a spinner.  It floats well, and the lightweight turkey flat post helps it repeatedly land upright.   Bring on the yellow bugs!