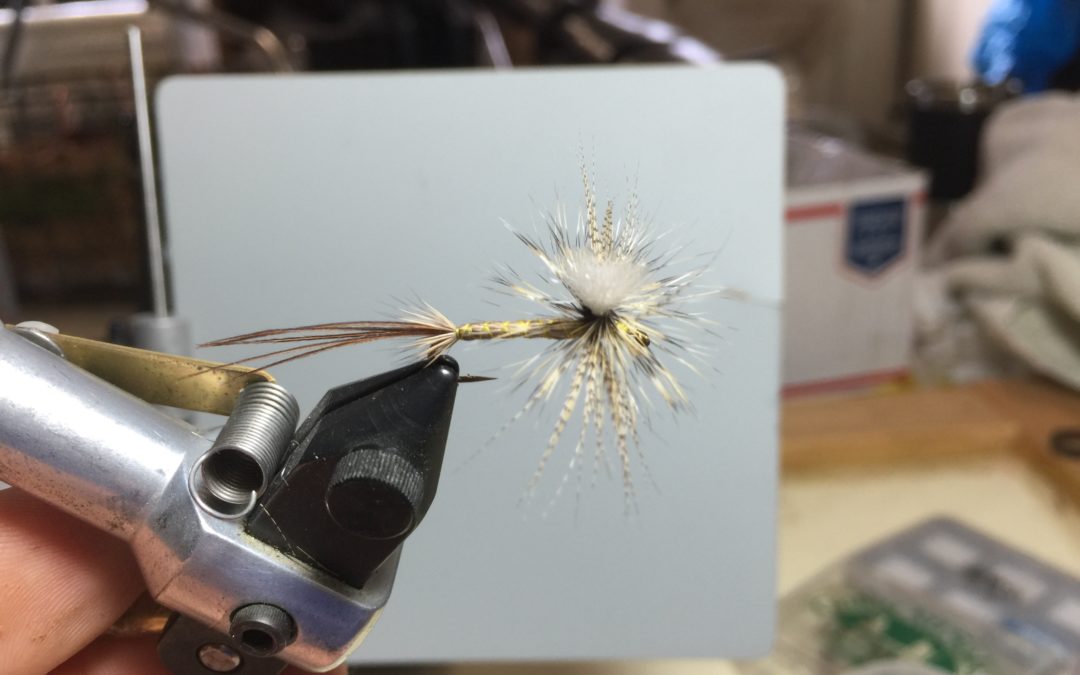 This fly is the marrying of several local styles, and is thus of no credit to anybody but them.  Body and tail courtesy of Clarence Roberts.  Hackle style courtesy Jerry Regan.  And wing selection courtesy of Rusty Gates (borrowed from a secret fly that can never be seen).  With so many good flies already out there, it’s fun to marry elements of each.  This fly has been good this year. 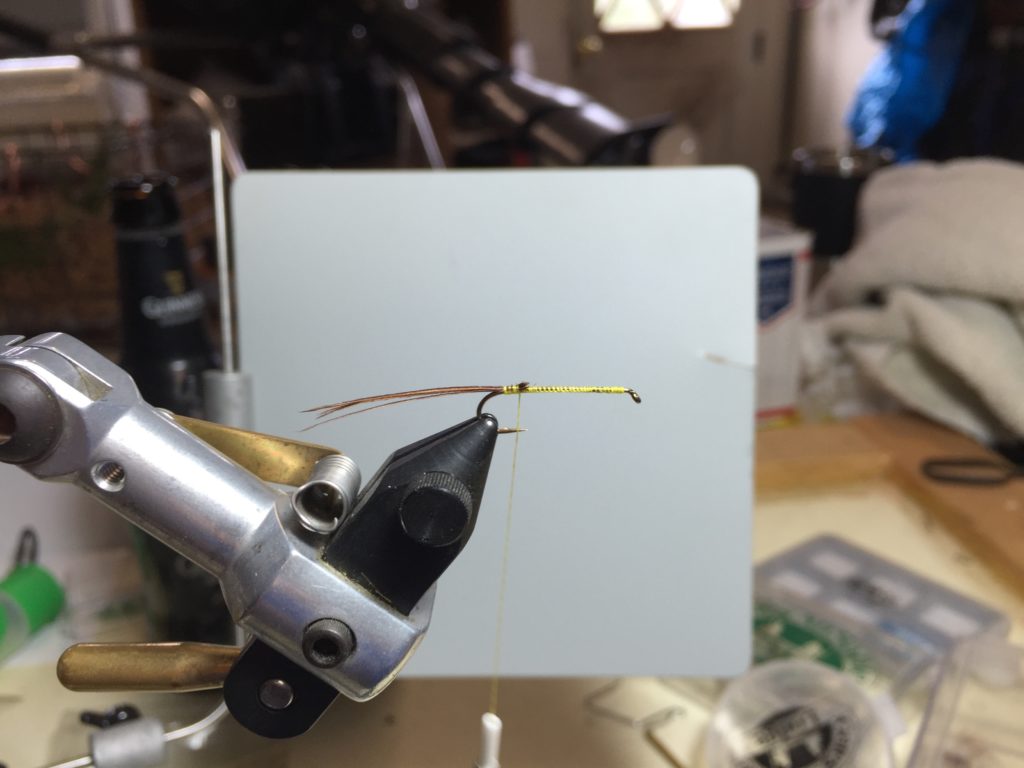 Start thread and cover hook shank once, but thoroughly.  This will keep the fly from spinning around the hook shank.  Tie all the way to the bend, and then fasten 4-6 pheasant tail fibers as a tail.  The tail should be longer than the hook shank. 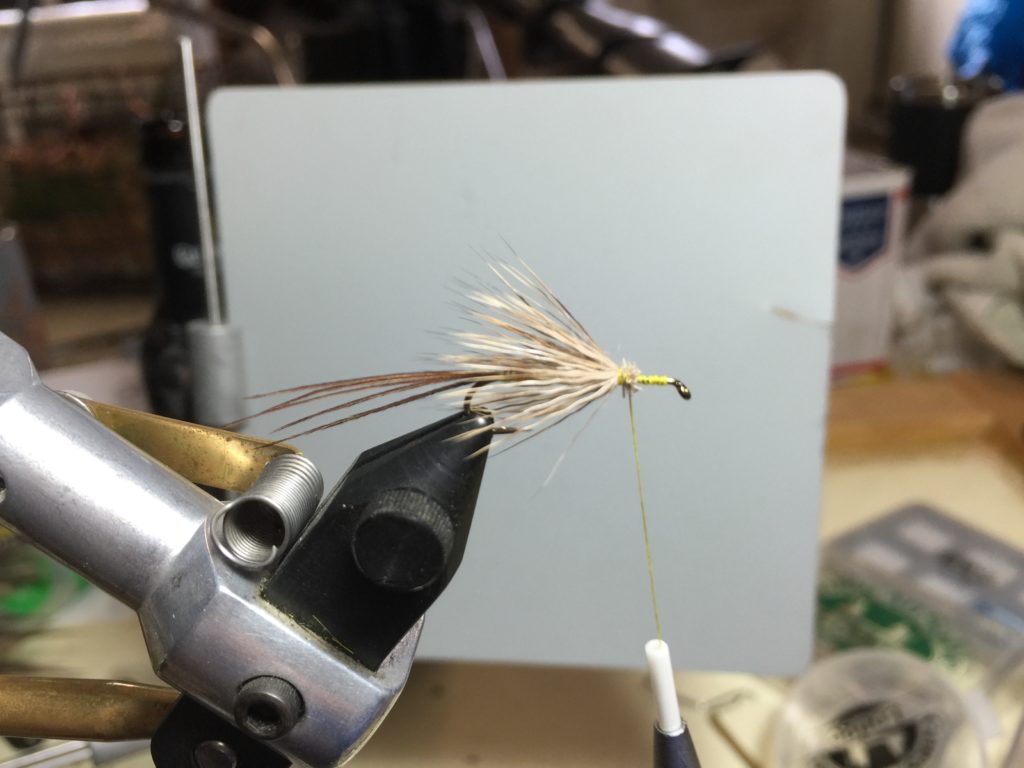 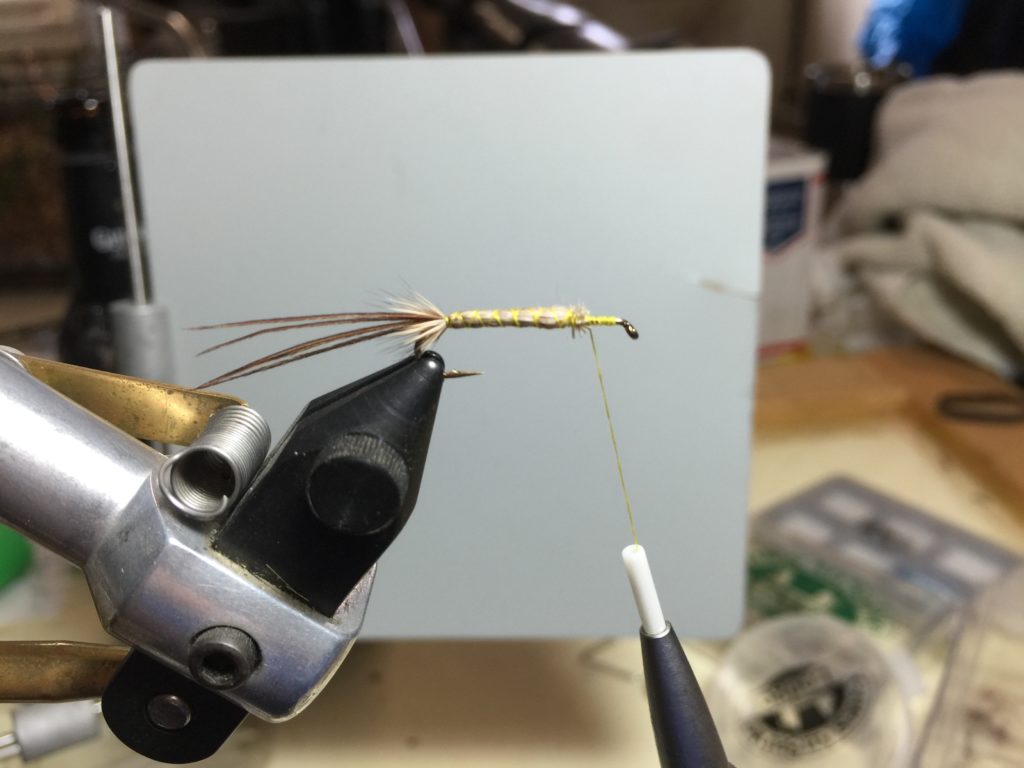 This is the traditional Michigan criss-cross thread pattern over deer hair.  The thread should form X’s on top of the body.  This is not crucial at 11 pm during a drake spinner fall, but it is a — perhaps the — signature of Northern Lower Peninsula Michigan dry flies. 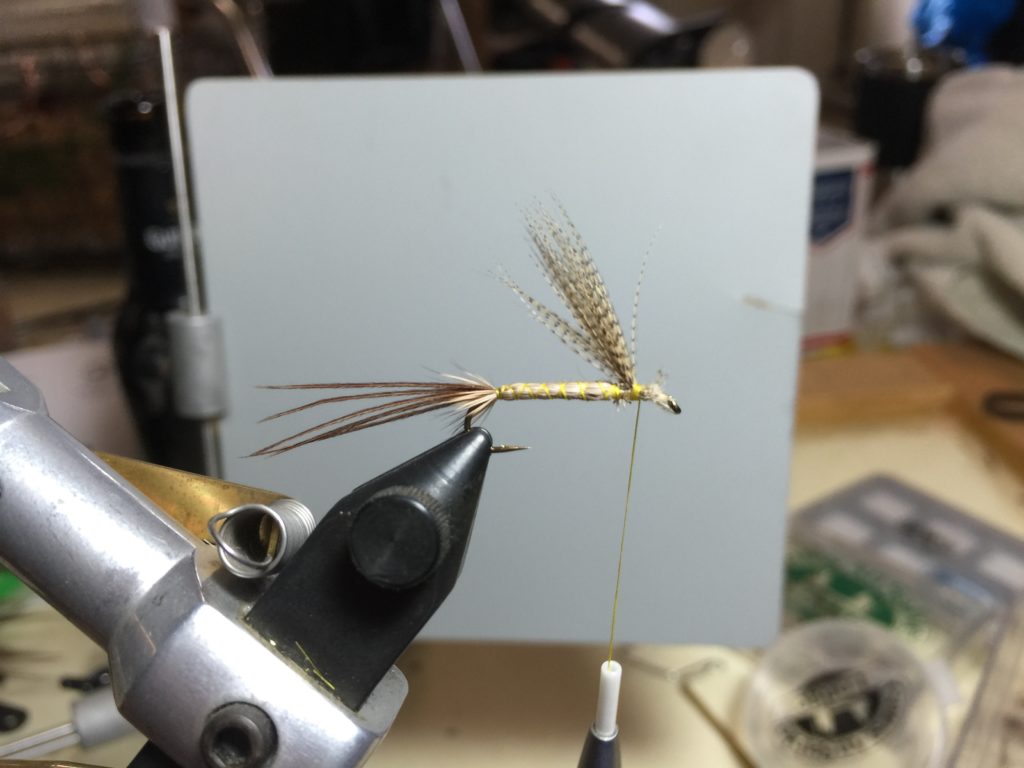 The wings will be wood duck.  Peel off the fibers from each side of the stem of a wood duck feather.  Create a bundle from them trying to keep the tips as even as possible.  Tie them in so they are hook shank length. 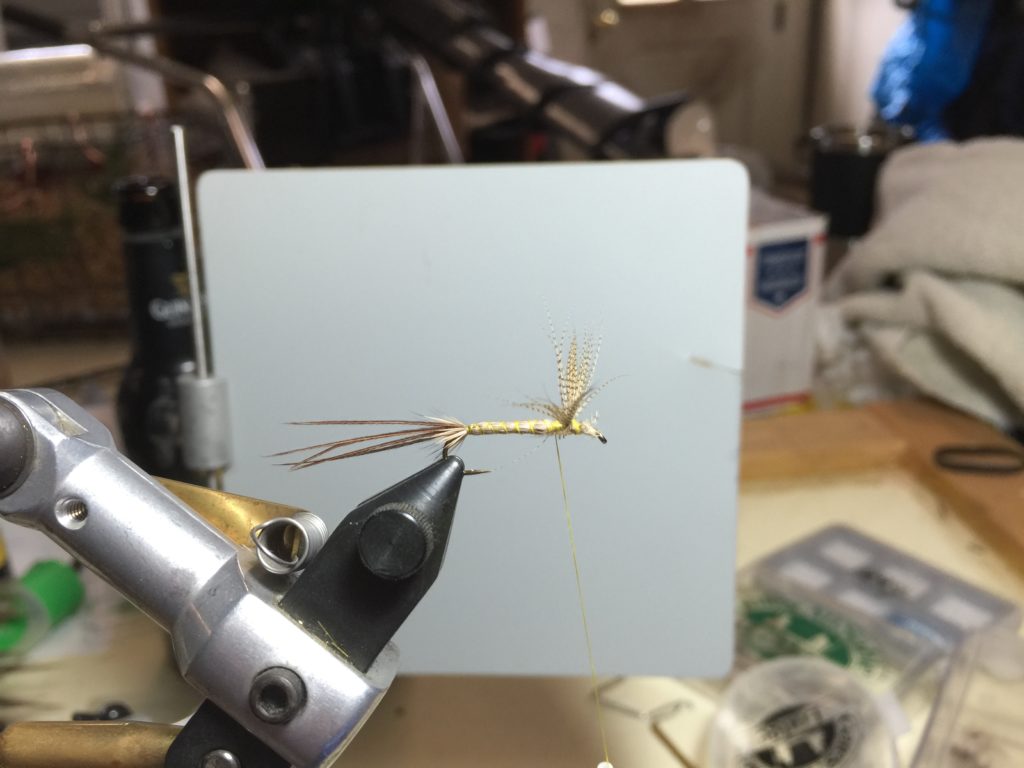 Use the thread to split the wings.  I like to do this by creating figure 8s through the material, pulling the two wings apart with my fingers to create space, and then doing it again. 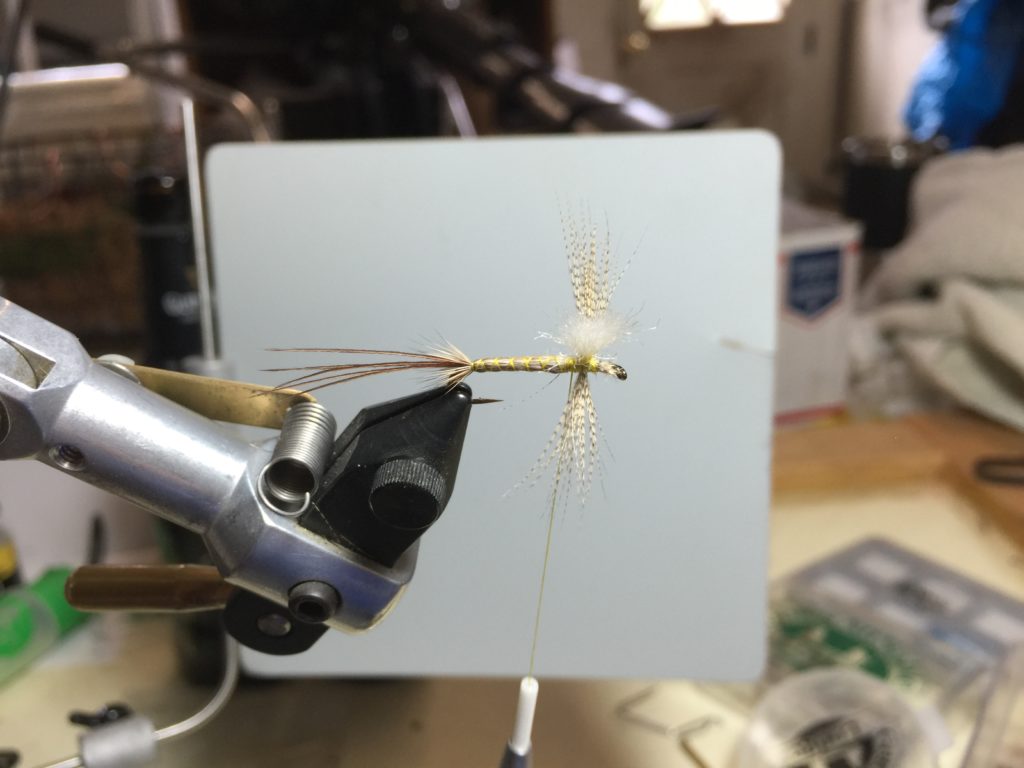 This tricky step requires some stealth.  Take a strand of Hi-Vis, or similar post material (less is more!), and lay it between the wings on top of the hook shank with one hand.  Then softly bring the thread over the HI-Vis from in front of the wing to behind the wing.  Then repeat the procedure from the other direction.  This will form a single X of thread that is holding the Hi-Vis.  Now pull both strands of Hi-Vis up and wrap around it with the thread, forming a post.  A drop of cement helps.  This step is difficult if you haven’t done it before.  It is also hard to describe! 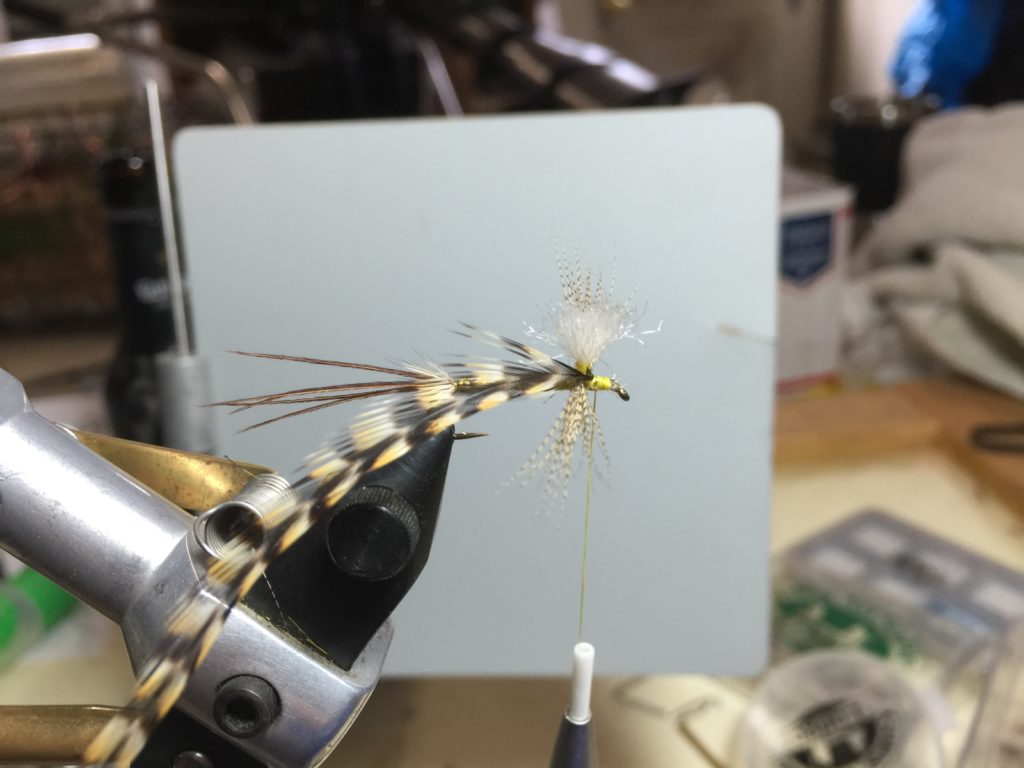 Tie in your hackle, or hackles.  Cree is excellent and sexy but hard to get.  Brown and Grizzly would be fine.  Carefully wrap the hackle around the post being careful not to entangle your spent wood duck wings. 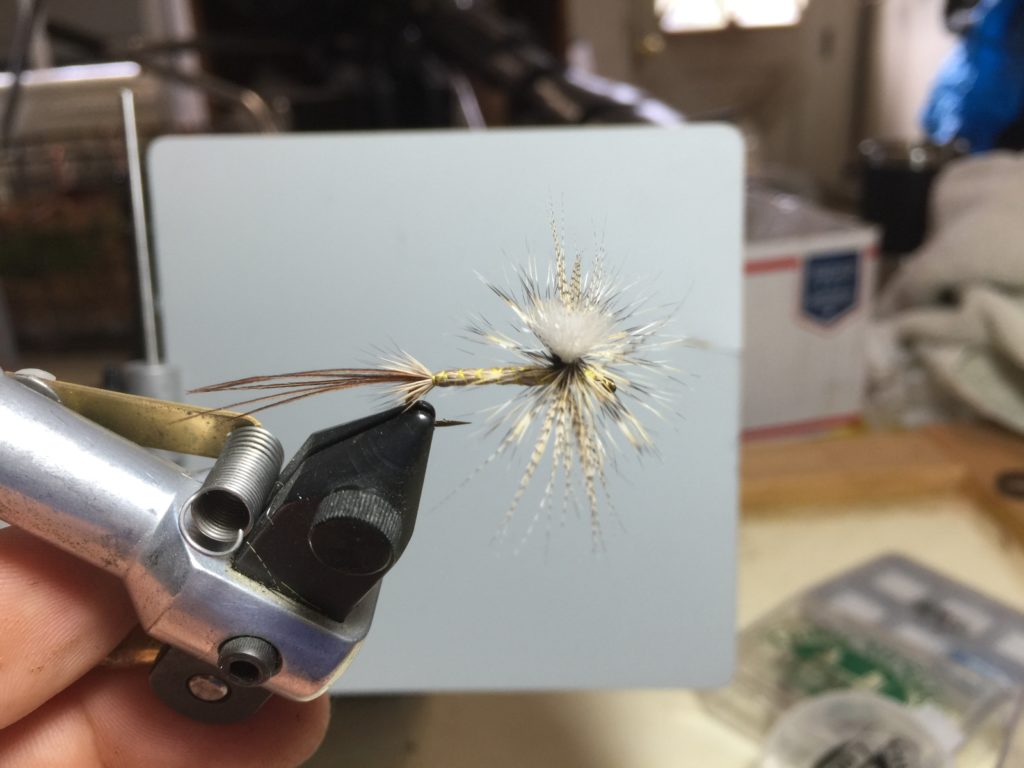 What emerges is a pretty cool low riding, easy to see brown drake that sits flush in the water but has enough floatation to fish through a night of drakes.