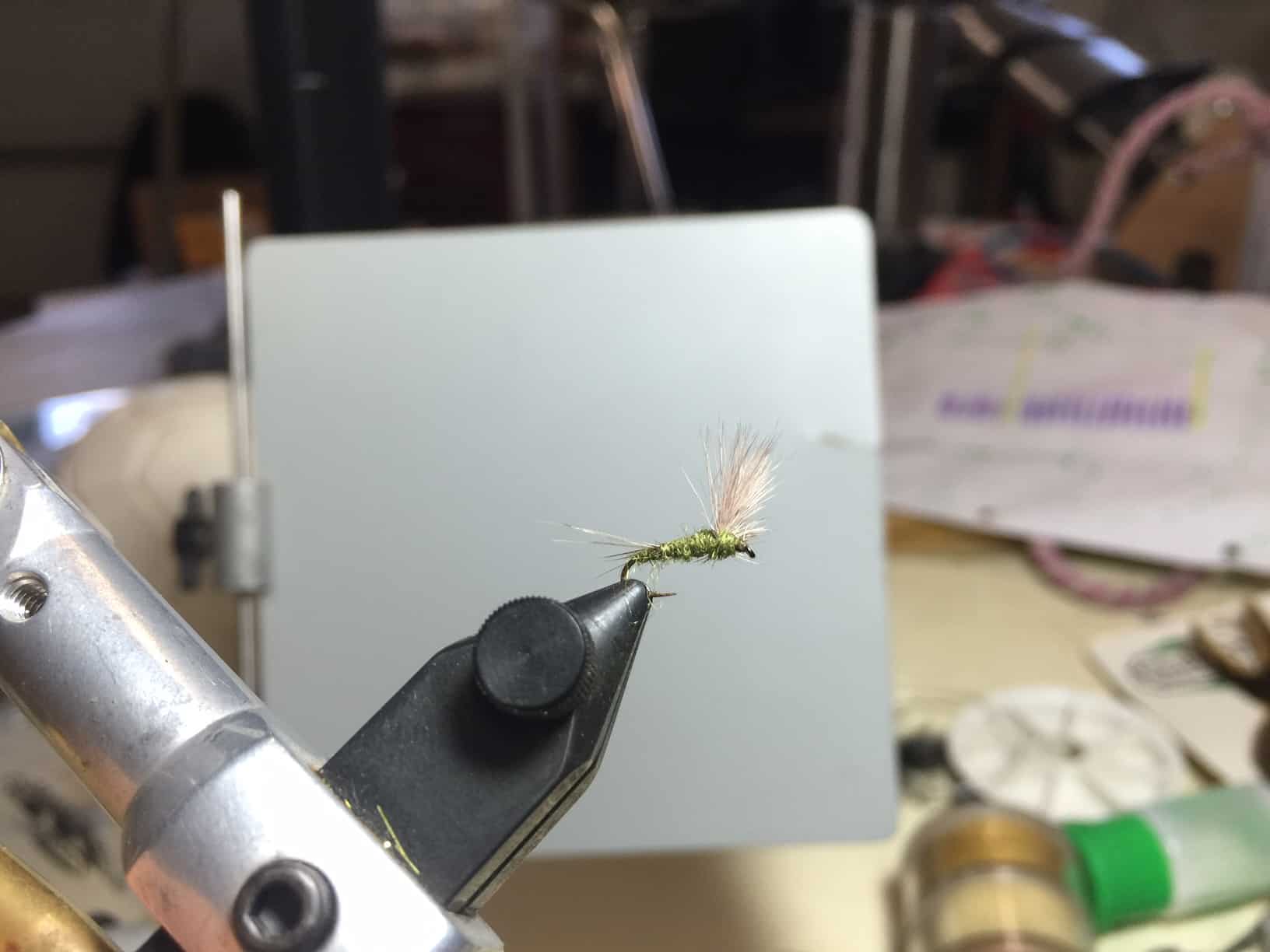 Years ago, this fly was a staple at Gates Lodge.  We’re going to bring it back in 2017.  To the commercial tyer, this fly is a pain in the butt. Calf body hair hardly compresses.  The result, when setting the wing, is an unsightly bump in the middle of the fly.  “Proportion-control” becomes very important.  The end result is a stable fly that consistently lands upright, is easy to see, and is well liked by trout.  You can tie this fly for most of our mid-sized mayflies: hendricksons, mahoganies, sulphurs, BWOs.  Anything below a size 18 is very difficult. 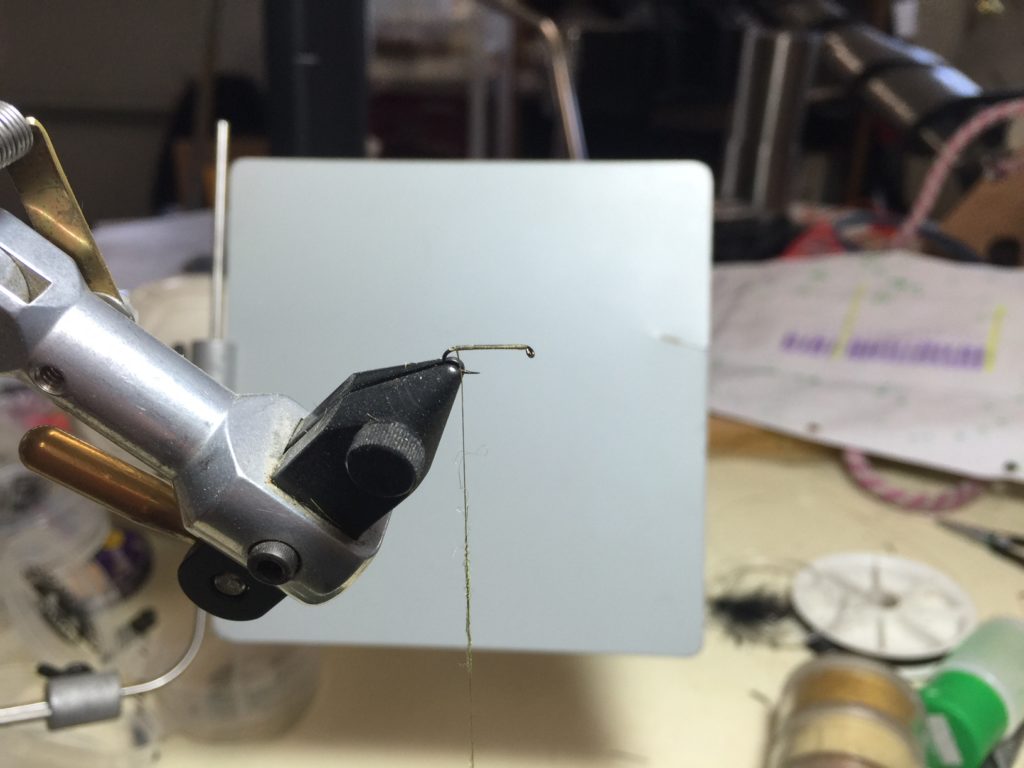 Start thread at the eye and wrap evenly to the bend of the hook.  The goal is to keep the body as thin as I can for now.  Once the thread is at the hook bend, twist on a small amount of dubbing.  This is what I’ll use to split the tails into “outriggers” to encourage the fly to land correctly. 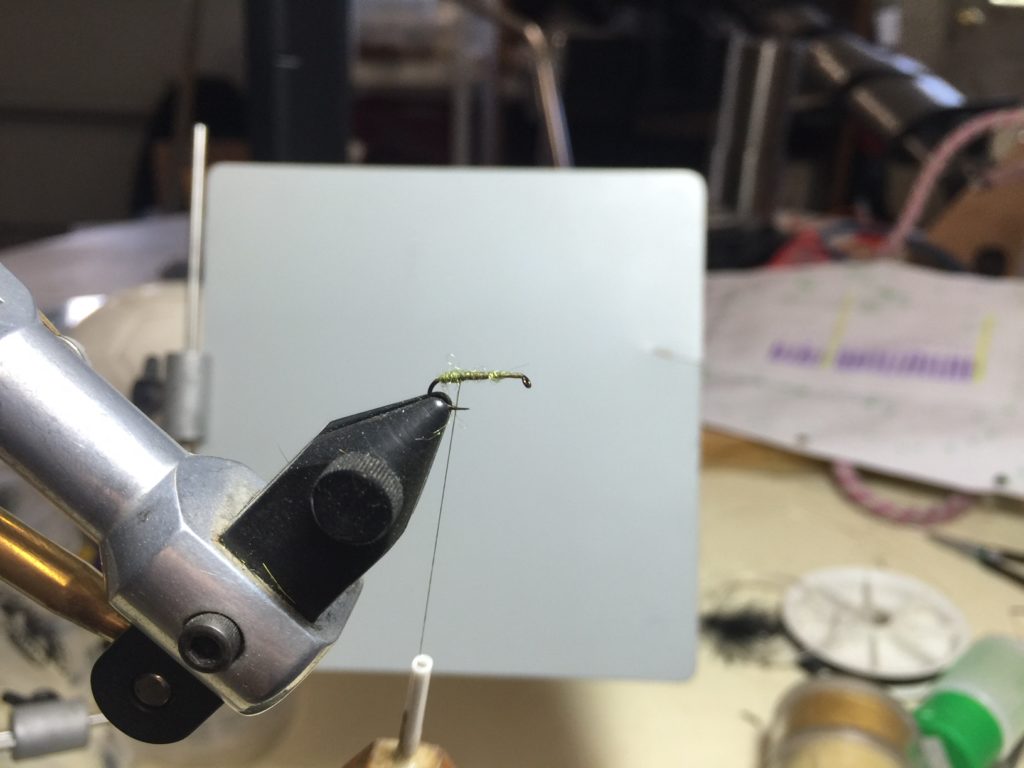 Too much dubbing!  If this happens to you, either unwrap it and start over, or work back over it with thread to narrow it down.  Leave a “bump” at the end. 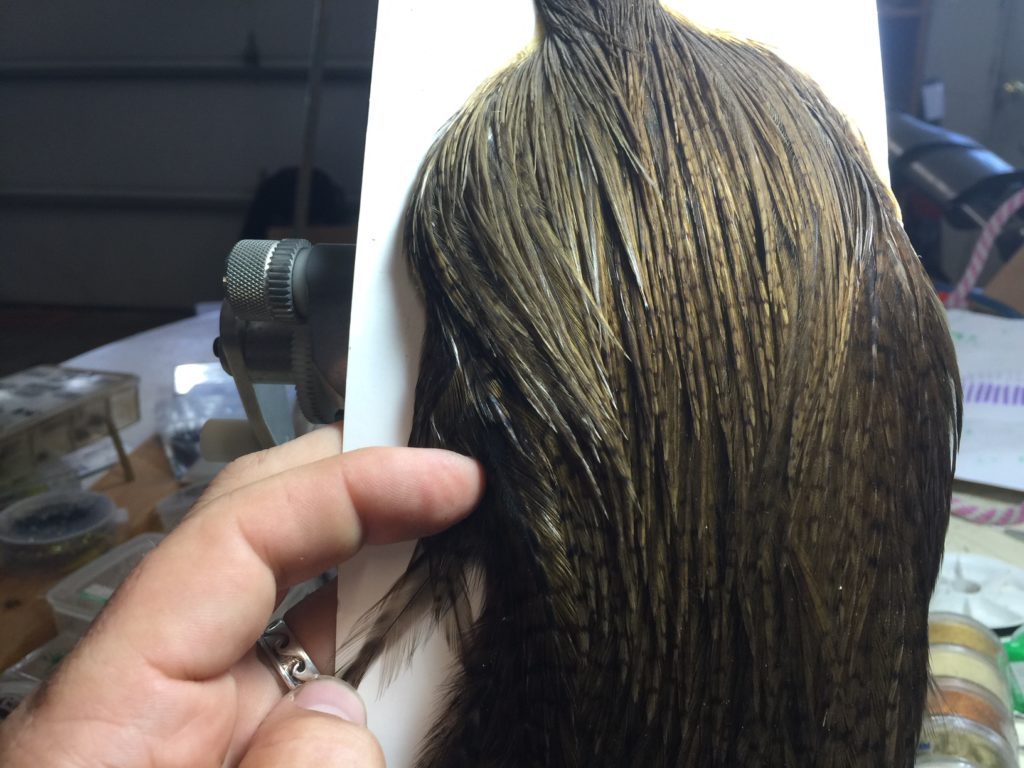 Choosing tails.  You want to use the edge, or spade, hackles of a rooster neck.  These are the longest fibers on your rooster neck. 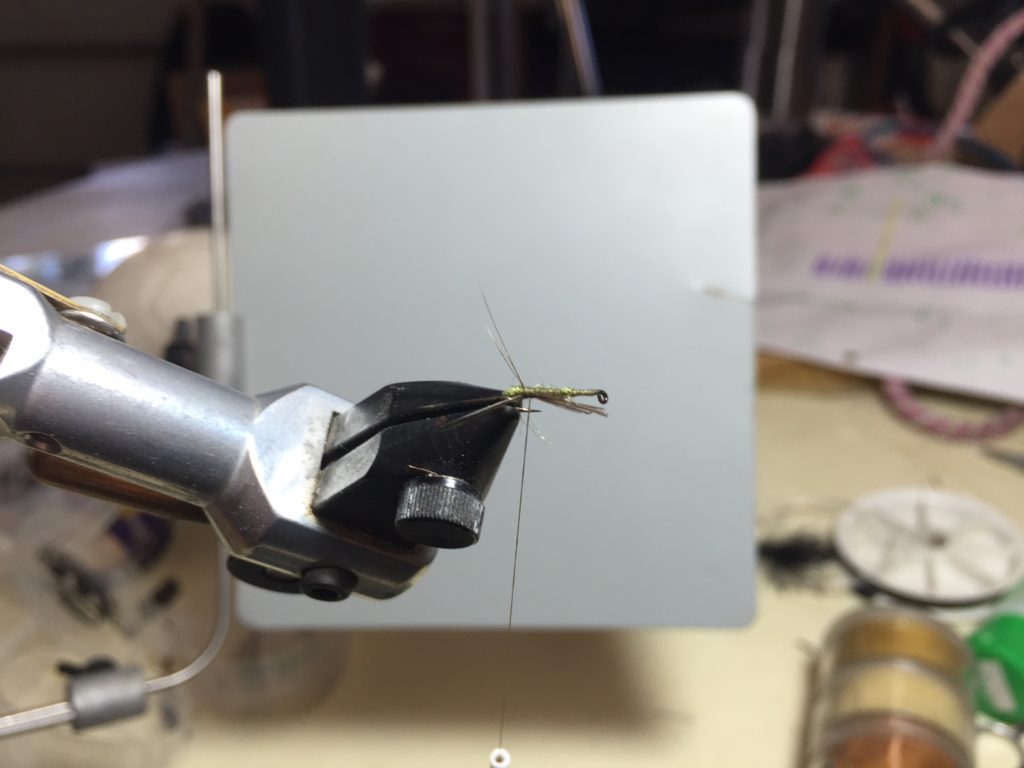 Here I’ve tied on four tails and then pulled them into a split position with my fingers.  I want the tails to be just about the length of the hook shank.  The tails of the natural are far shorter, but for some reason the fly seems to work as well or better with tails of the traditional, hook-shank length.  I’m guessing that the longer tails help the back end of the fly float.  After all, the natural flies hold their abdomens up.  Then again, the Klinkhamer works well doing precisely the opposite.  Who knows? 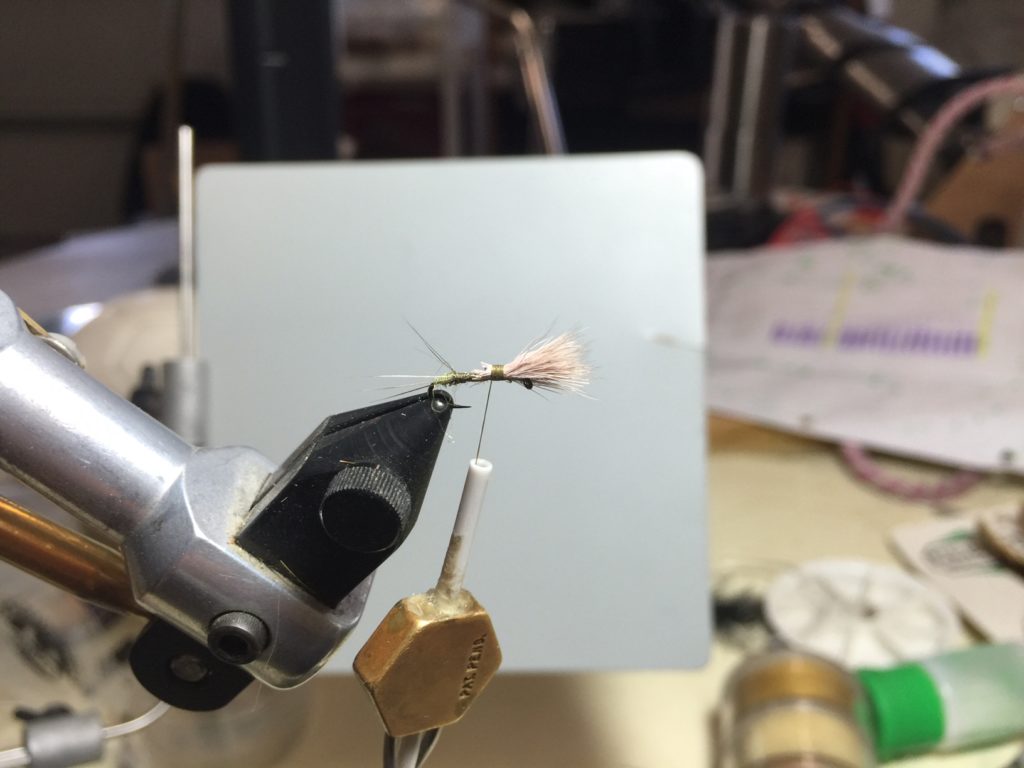 Now for the most important step.  Wrap the thread to a third of the way behind the eye.  Clip off a clump of the calf body hair.  Stack it.  Measure it to be as long as the hook shank.  The end result will be a wing that is slightly shorter than the hook shank.  Hold in position and make one soft wrap, and then a half-dozen strong wraps, with the tips of the calf hair facing forward.  I like to use the 6/0 thread for this because I feel I can crank the wing into a more permanent position with less wraps, and less thread breakage. 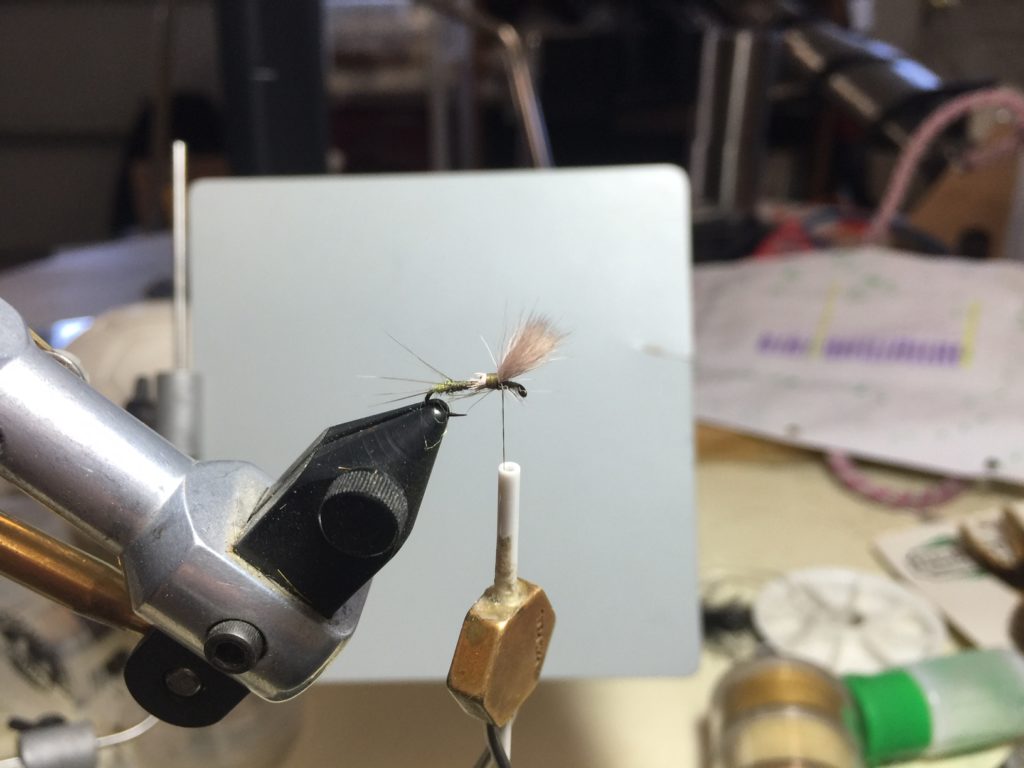 I stand the wing up a bit by holding it upright with my left hand, and sneaking some thread under it with another half dozen wraps.  Now I’m ready to wrap the thread back to the base of the tails, dub the thread, and wrap the dubbing up to the eye, being careful to lightly dub over the “bump” behind the wing, and heavily in front of the wing, standing it into position. 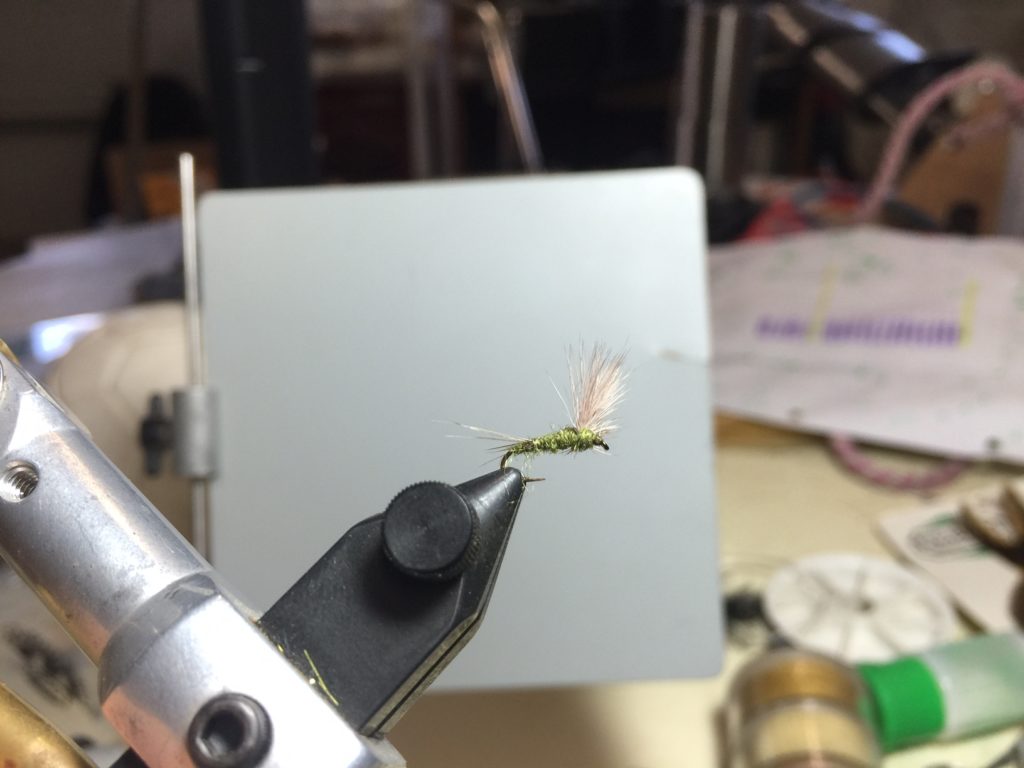 Here’s the completed fly.  Wing just barely canted forward, body stout but not too heavy, tails splayed.  This fly is deadly on a late July morning.