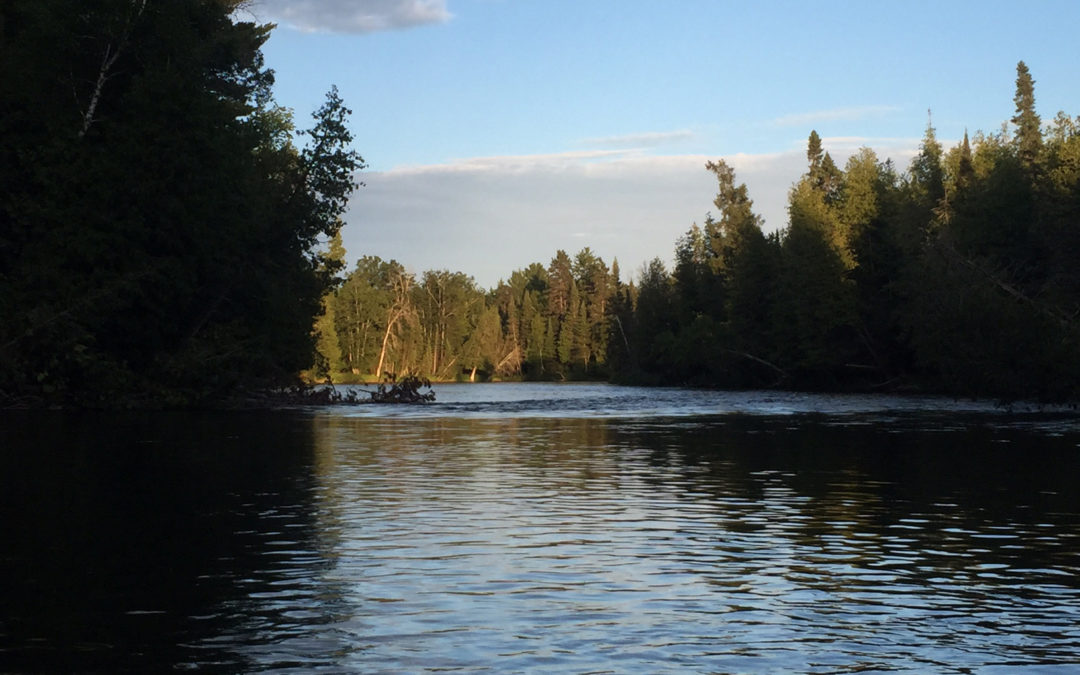 No time of the year is more condition-dependent, I don’t think, than the height of summer.  Consider the roll-call of variables: heat, moon, lightning, mist, fog, low water.  It can be too hot and too cold…in the same day.  A cloudy day sends us to one river for brown trout, and a sunny day to another for brook trout.  A full moon means the night fishing might be off — better go trico fishing — unless of course it’s a hot night, in which case, full moon or not, it’s good to be out there.  But then again, a hot night means dawn tricos, which can mean some better fish are rising.  Or it could get really hot, and you might take what my friend Tom Buhr calls The Warmwater Tour and go see about a smallmouth or two, as Chef Matt did with Denny and Todd the other evening. 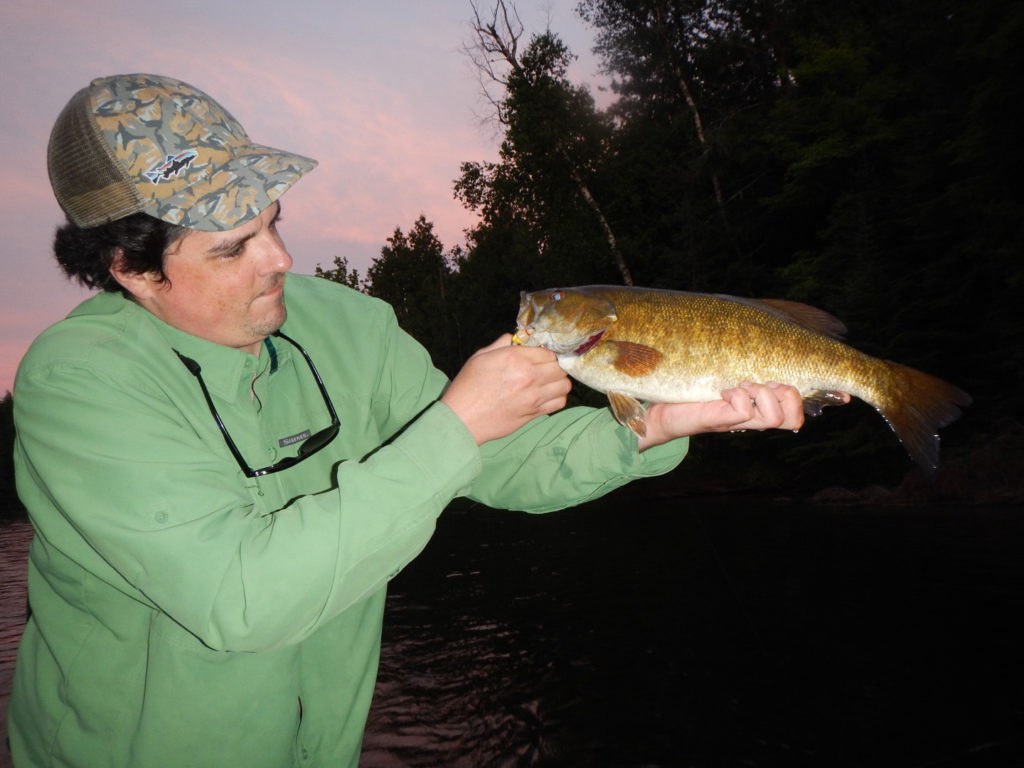 Currently, the moon is full and it’s about 70 degrees at 10:15 pm on a Wednesday evening.  My right elbow is sore to the touch from a long night of mousing with Colin on one of his home beats, followed by some wind-beating surf casting today on Lake Michigan.  I’ve showered, but still smell like campfire, the remnants of an overnight camping/fishing trip with the family.  My mind is on a fish I saw on a Lake Michigan flat.

It was a blank, beautiful day.  The stretch of shoreline I wanted to get to — a long rocky reef showed to me by a friend — was out of reach for a couple kids under four feet tall.  So, as often happens to dad, I found myself standing on a barren looking beach flat where the kids could swim, instead of casting at the rocky reef where all the smallmouth were.

As I waded through the knee-deep water, just looking, feeling defeated from the fruitless night of fishing before and the barrenness before me, I happened to look back toward Katy and the kids and saw, swimming between us — and coming right at me — a long, large fish.

It banked about 30 feet away and was cruising at a 45 degree angle to me.  I didn’t know what it was, but it was 3-feet long, tan, and more than likely my only shot.  Sore elbow or not, it was an easy cast.  I stripped once and the fish altered course and came right at the fly.  It flashed a bit — but I felt nothing — I stripped, and it seemed to slash.  Still nothing.  And then it swam off with me wading and casting after it as if I might change its mind.  You never can.  It wasn’t a carp, and I can only think it was a muskie.  I spent the next two hours looking for something.  Anything.  Even a six inch bass would have been fine.  Nada.

Such are the days of summer exploration.  There’s just so much to do this time of year.  Find a creek.  Fish dawn.  Fish after dark.  Throw foam.  You can do it all in the same day if you want, embarking in a maniacal cross-county — or counties — chase.  The heat has pushed our best fishing to early and late in the day.  The guides are leaving early to make the most of the before-lunch fishing, which has included tricos and olives and lots of rising trout.  The tricos on the Holy Waters will be very heavy for the next month.  The North Branch will fish best downstream of Lovells where the water is cooler.  The South Branch will be cooler downstream of Potters Landing.  The Manistee runs coldest of all, especially in its upper reaches.  It’s a great place to throw hoppers and other terrestrials at the grassy banks.

My best trico trick is to fish two flies.  7x to a Griffiths Gnat, and 8x to a trico spinner.  This is fine and far-off fishing.  I like to wade upstream and find a pod of fish and then tend to them, almost like a gardener.  If you throw a bad cast, take a break.  If you catch a trout, take a break.  Always start with the fish rising furthest downstream, and work up the pod.  A good morning might be spent without moving.  The first strong wind or canoe ends it for me.  But seeing a river come alive in the morning is special.  The tricos are a major hatch on our river.  They are a spectacle, the spinners gathering in twisting columns over the riffles.  They are, in some ways, the perfect antidote to hex fever.  My old friend Tom N, now gone from the river, would fish hex for a month straight and then seamlessly, and without complaint, be just as excited about the tricos, which he fished for two months straight.  To Tom, it was the next thing, a necessary and enjoyable component of a summer well spent. 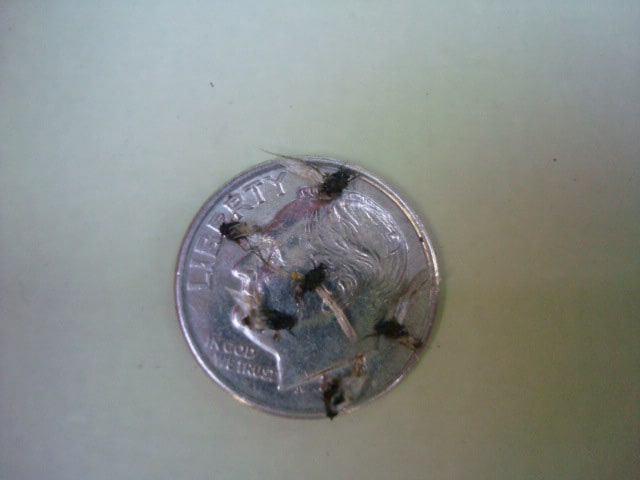 “I’ll give ya a dime for a half-dozen tricos”

If you want to make the most of your trico fishing, noted small-fly expert Ed Engle will be here August 20th to teach a two-day small fly class.  This is a class that I’m very much looking forward to and may participate in.  Ed literally wrote the book on fishing small flies.  You’ll receive theory, practice, fly-tying instruction, and on-stream instruction during the trico hatch and spinnerfall.

We’re gonna spend the next week trying not to melt.  Fishing early and late in the day, or at night, will be the very best times to be out.  We’re supposed to receive significant storms tomorrow night, along with some needed rain, and if you have questions or concerns about the conditions please call or visit the shop and we’ll let you know if something is too high, too low, too hot…or just right.

Less than a month until the Midnight Derby!  It’s time to start signing up…Give me an email to get on the list, and help us raise some money.  Since we began 4 years ago, we’ve raised over $6k to various coldwater causes.  We receive significant support from Hatch Reels, Scientific Anglers, and Sunrise National Distributors.

And it’s also less than a month until the Kid’s One-Fly Box Challenge!  Kids get free gear, casting instruction, and personal, volunteer “guides” to help.  This is our favorite event of the year, and is an Anglers of the Au Sable event.  We receive significant support from Riverview Lodge, Hatch Reels, Scientific Anglers, and Sunrise National Distributors to make this possible.  We need kids to sign up, and for folks to volunteer.  In years past, many participants of the Midnight Derby have taken a kid fishing.