Gotta be psycho to fish the…. 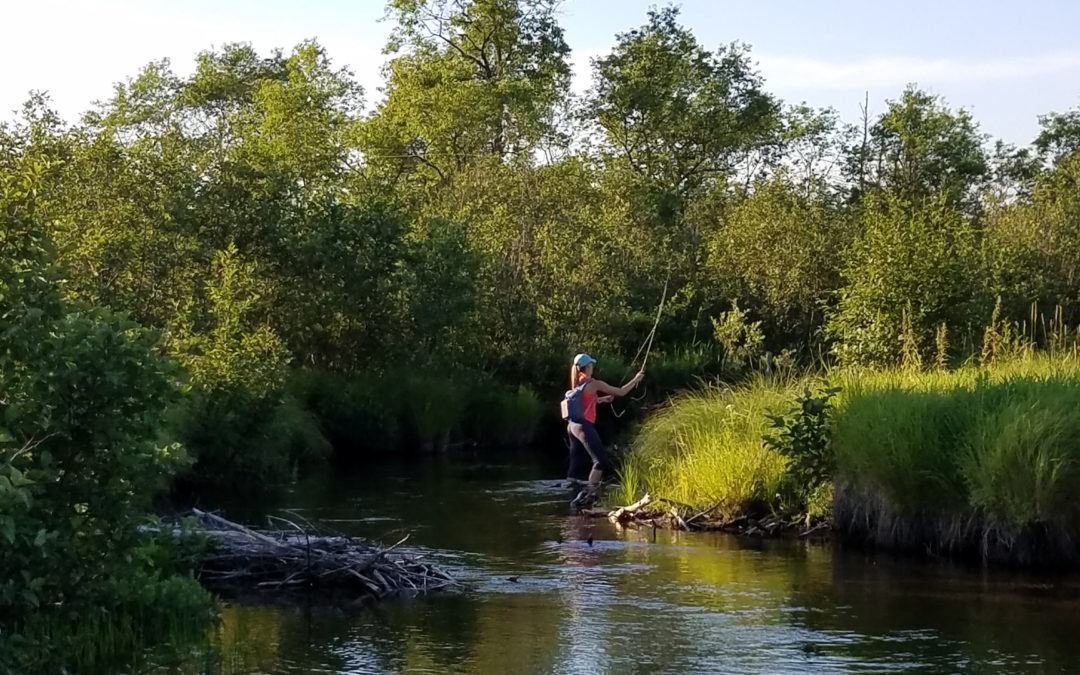 After a week of sparse hatches, the tricos arrived in full force on the middle Holy Waters. They swirled in clouds over the riffles. They lay spent in the pools.   The river always changes, and every year these subtle shifts – and the new feeding lanes created – are marked no better than by where the trout choose to rise to tricos. In one such new seam a dandy trout rose so quietly in the shadow it was easy to mistake it for a current swirl.

This was a fine fish, one of three I found just pacing the back of the lodge, between rooms 1 and 17. I would have loved to have snuck across the river and cast to it. Perhaps one morning I will.

The trico is a simple mayfly.  It has a black body. It has white wings. The females have a white-olive abdomen. It is so small that there is little reason to dress up imitations.   Black thread. White wings. Teeny-tiny hook (#24-#28). Apart from getting the size right, the fly is rarely the limiting factor in a successful trico morning. Much more important is the length of the leader, the fineness of tippet, and the timing of the rise. When the tricos hit the water, they do so at once, in mass. A feeding trout during the peak of the spinner fall in moderately fast water cannot eat every natural. They tend to rise in rhythm (and this spacing between rises, though more or less uniform, has nothing to do with a trout’s musical talent…rather it is the time it takes to rise, settle, and rise again). The savvy trico angler has to make sure that his or her fly is next in line when the trout is on its way back up to the surface.  Watching a size 26 fly bounce between the rise forms offers all the anticipation of watching a mouse about to walk into a trap (we have a great trico class with Ed Engle coming up).

On any river in Michigan, a trout over 12” on a trico is a trophy. Over 10” is a darn fine one. On a difficult morning, a few 6” fish is fine. For some, this isn’t enough…and to them, this season exists in the dark.

The weather over the next week is going to cooperate a bit more than the one previous. The temps drop into the low to mid eighties, the overnight lows – which are far more important – will be in the 50s.   After every cool night the daytime angling has been very good. After every hot night, anglers have been driving to colder, skinnier water, or checking out some warmwater options: 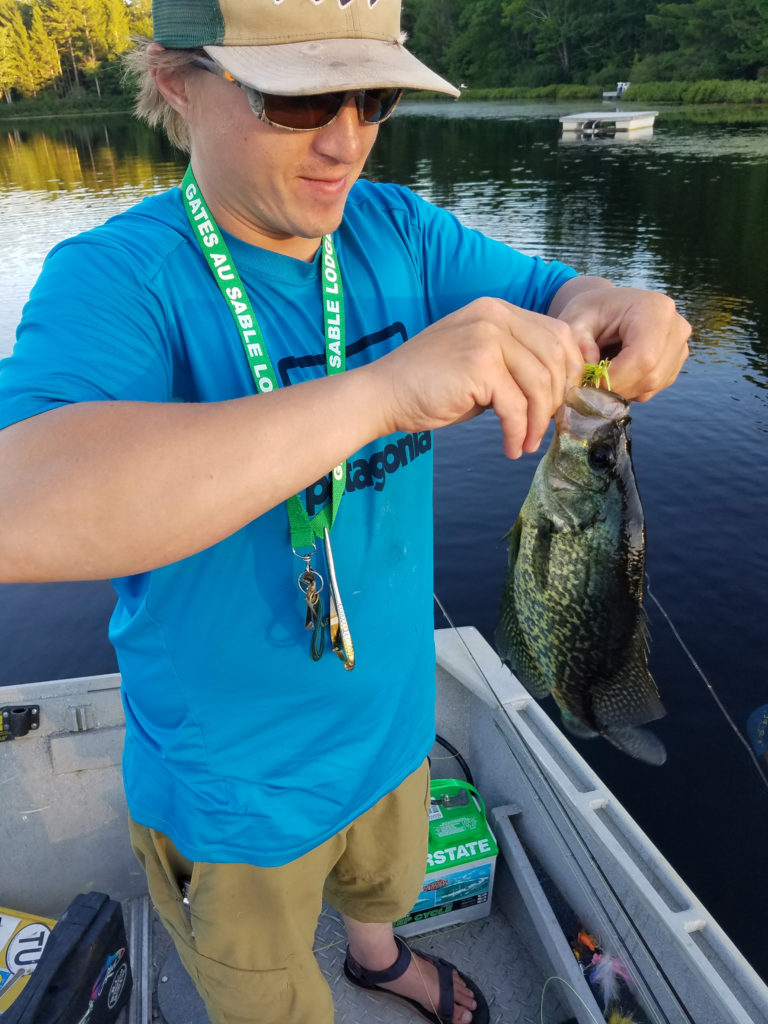 Jordan with a big topwater crappie

Ants and assorted attractor patterns fished in fine tippet will catch fish in the afternoon. Adding a dropper on 7x fluorocarbon will catch even more, especially between 10 am and 4 pm. By the late afternoon, the tiny olives have started hatching out of the weeds and the fish will start to look up. At dusk, there will be two spinnerfalls, each short and intense, of olives. First the size 24s, and then the 18s. Fish a two fly rig for this as well. 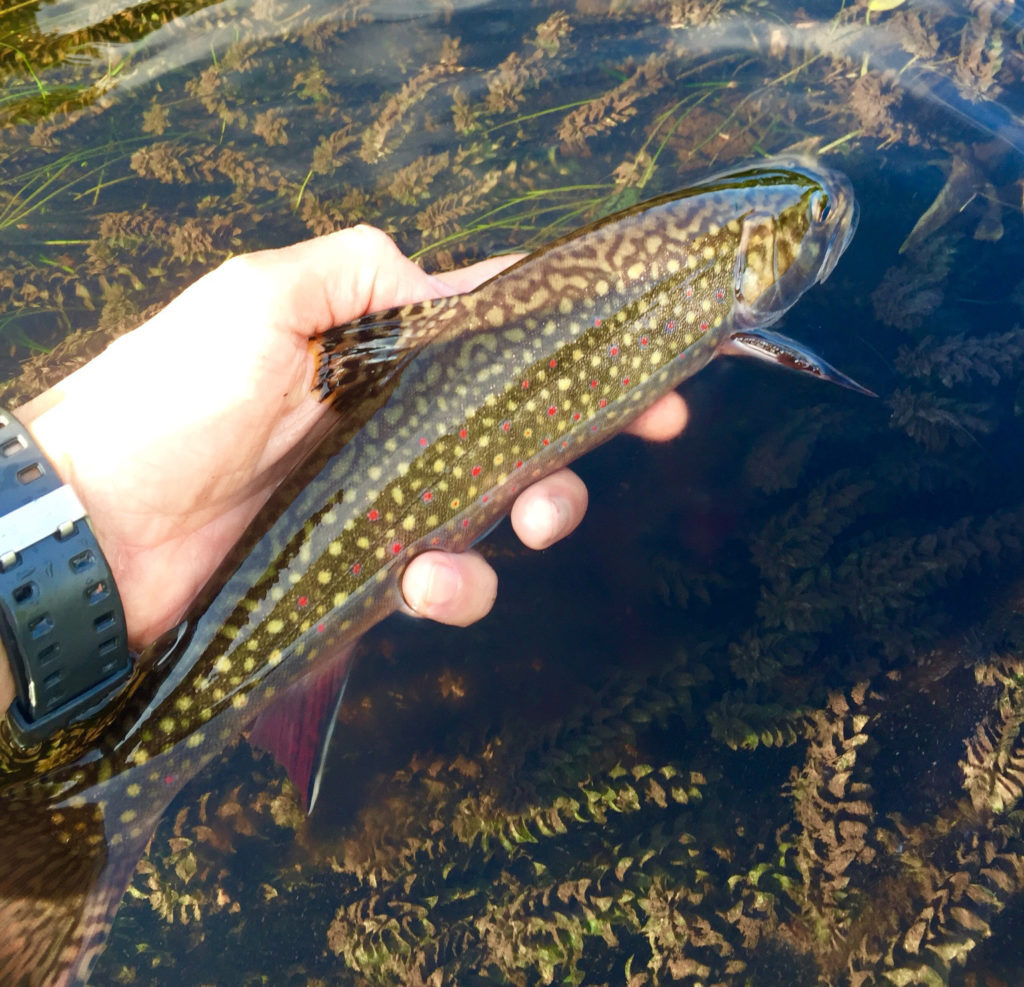 Kevin got out in the morning and found a dandy brook trout.

The after dark fishing has been phenomenal this year. Low water and hot daytime temperatures mean the cooler night is when the big fish feed. Alex H from the shop and I got out for a long night of fishing. First we went to the South Branch – water temperature was 65, air temperature was about 80, humidity was about 100% — and in the first little riffle we moved four trout, two of which were large. A distant storm moved in and skirted south. Lightning filled the sky but there was only one rumble of thunder, so we kept fishing. The river went dead, and we opined that the lightning flashes had put the fish down. I asked my night fishing guru about it.

“The northern lights will do that too,” he said.

I did manage one fish: 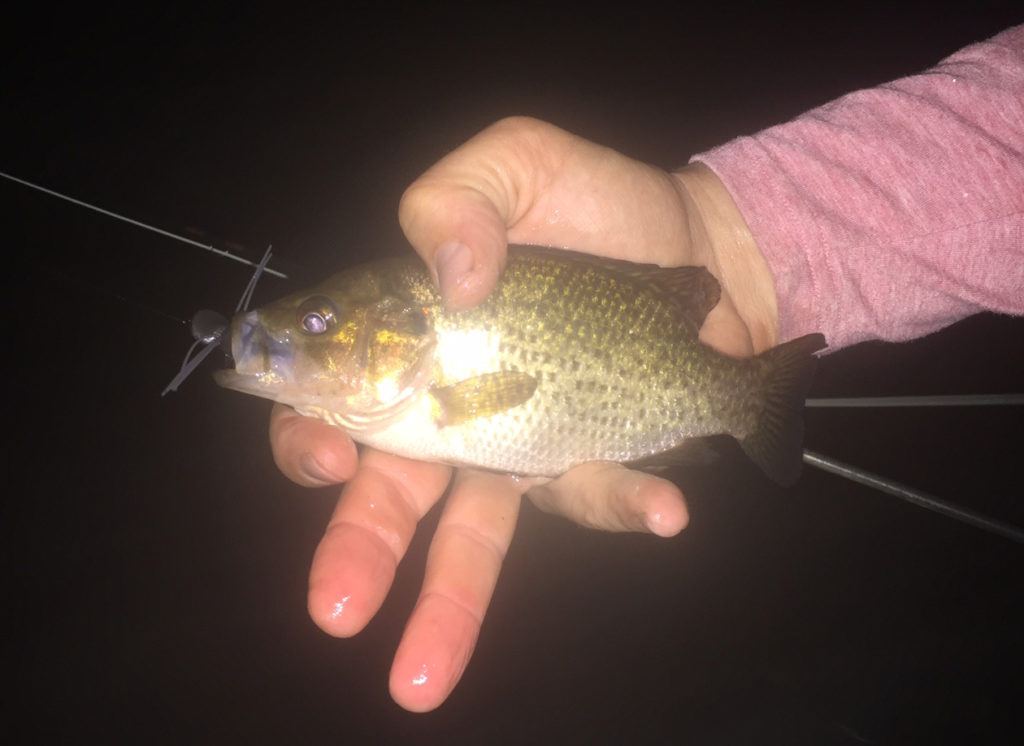 But we decided to head north, away from the southern storm, looking for darker skies. We found a nice patch of water and the sky was dark and the fish were on. There are a lot of 10-15” fish in the mainstream right now, but through persistence Alex found this perfect male brown, which took the fly deep and had to be revived for some time. At first the trout wouldn’t stay upright in the water at all, and we figured him for dead. But Alex stuck with it and after a good fifteen minutes the trout was holding itself upright and finning softly. When we left it, the trout appeared normal but sluggish, holding and breathing behind a logjam.   Might be dead. Might not. But if we’d just left him for dead then that’s what he’d be. It was good to take the time. 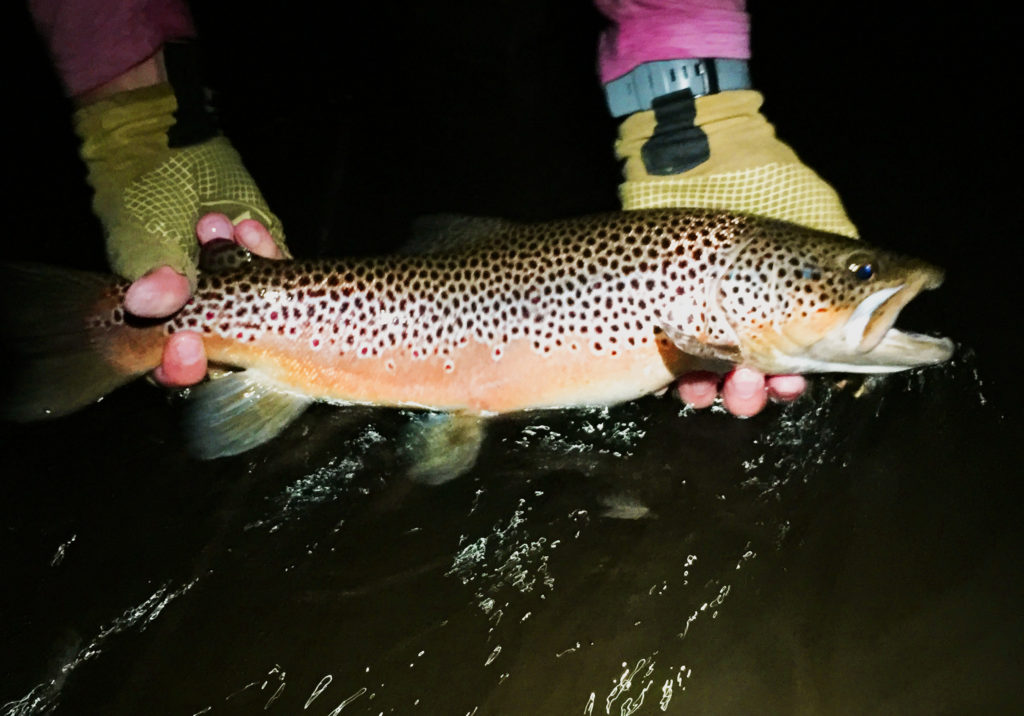 This Saturday night is the night of the Au Sable Canoe Marathon.  If you’re coming to watch the race, stop by for Trout Fest.  If you’re coming to fly-fish, the mainstream will be dangerous after 9 pm with a fleet of racing canoes barreling down the river.  Sunday, the river is dirty.  By Monday, more or less back to normal.  Fly fishers should head North, or South, or to the Manistee.

The clouds have rolled in this evening and it’s not yet 9 pm. Might be worth a drive to a good flat for the spinners. Probably. Alright…I’m going!

Less than a month until the Midnight Derby!  It’s time to start signing up…Give me an email to get on the list, and help us raise some money.  Since we began 4 years ago, we’ve raised over $6k to various coldwater causes.  We receive significant support from Hatch Reels, Scientific Anglers, and Sunrise National Distributors.

And it’s also less than a month until the Kid’s One-Fly Box Challenge!  Kids get free gear, casting instruction, and personal, volunteer “guides” to help.  This is our favorite event of the year, and is an Anglers of the Au Sable event.  We receive significant support from Riverview Lodge, Hatch Reels, Scientific Anglers, and Sunrise National Distributors to make this possible.  We need kids to sign up, and for folks to volunteer.  In years past, many participants of the Midnight Derby have taken a kid fishing.

Sign up for our catalog!  If you received your spring 2016 catalog, then you’re on the list.  If not, sign up!  Email your mailing address to [email protected]  Useful product descriptions, unique stuff, great gifts.  We mail both a spring and fall catalog. 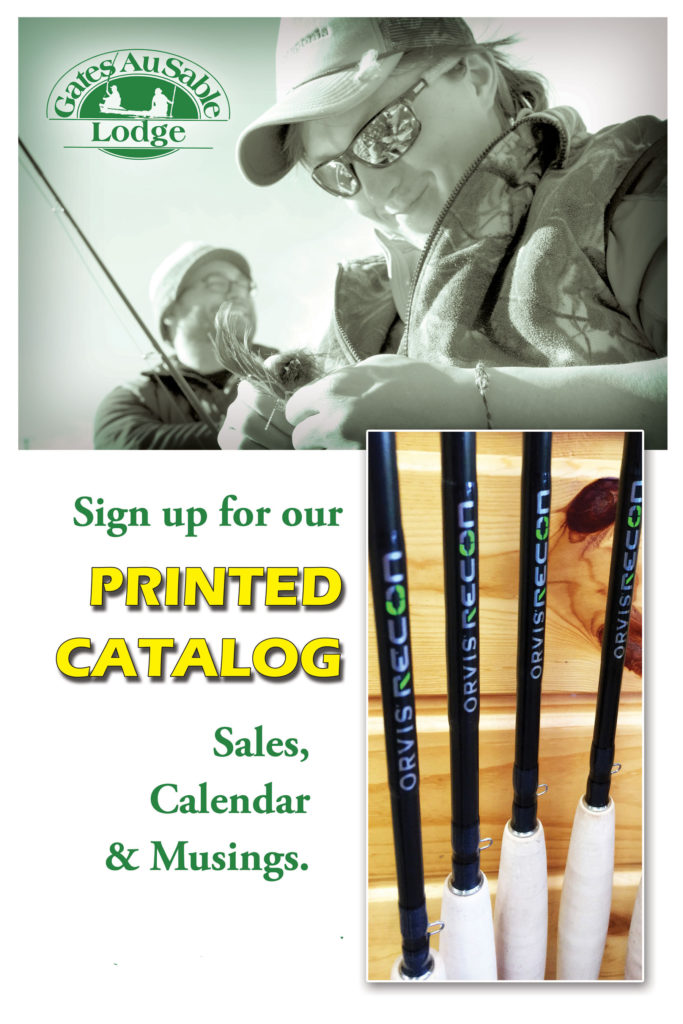