Only a few spots left:

Less than a week until the Midnight Derby!  Last chance to sign up…Give me an email to get on the list, and help us raise some money.  Since we began 4 years ago, we’ve raised over $6k to various coldwater causes.  We receive significant support from Hatch Reels, Scientific Anglers, and Sunrise National Distributors.

Canoe Race week…is over.  Sort of a mixed up year: we had racers staying at the lodge, and fly fishers in the race (one of our fly-tyers and old fly shop worker Phil, who finished, said he’d probably never do it again, and that the blisters on his hands would keep him from the vise for a few weeks).  Some folks come for both the fishing and the race, like Bernie, who supplied the magnificent top photo of the flights of tricos we’ve had at the lodge every morning…as well as this sweet underwater shot: 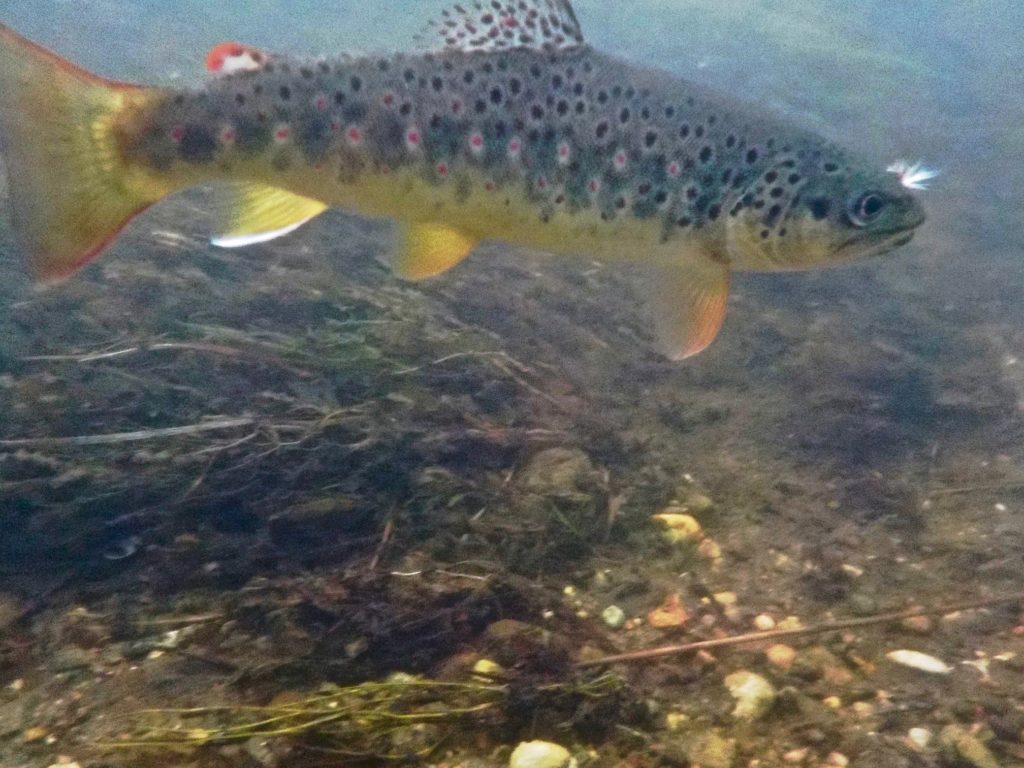 And with that melee over, and the muck settled from the river, it’s time to get back to fishing.  Thursday is going to be scorching.  The weekend is cooler: highs topping out at 80 degrees on Friday and Saturday, with overnight lows in the low 50s (that’ll be 40s in the river valley).  Cold nights certainly help the daytime fishing, and they don’t necessarily hurt the night fishing…they just shorten the feeding window a bit.  It also wouldn’t be the Midnight Derby if it weren’t winter-hat-cold at midnight.  For whatever reason, this event just attracts cold weather.  Makes for good fire-sitting though.

The Au Sable is suffering from drought conditions and has been for some time.  The water temperatures have more or less been fine in the upper river, and through the weekend they’ll be perfect, but the water levels are very low.  While the Holy Waters tends to hold its water better, the North and especially the South can look very clear and very barren during low water.  The trout — the feeding trout, anyway — will move to the center of the river, or wherever the deepest part of the channel is.  Terrestrials and attractors fished on fine tippet (go one size smaller than normal), and cast down the middle, can be deadly.  The trout are feeding through the afternoon, just intermittently.  To illustrate this point, the other day, late morning, I went to one of the benches at the lodge to scarf down a sandwich.  After about five minutes I had three feeding trout marked.  There wasn’t a rhythm to their rising…they were just eating whatever free-floating piece of food came there way. They were all small trout, but they were feeding trout nonetheless.  If you stick with it, though, you can find some nice sunny day fish out there: 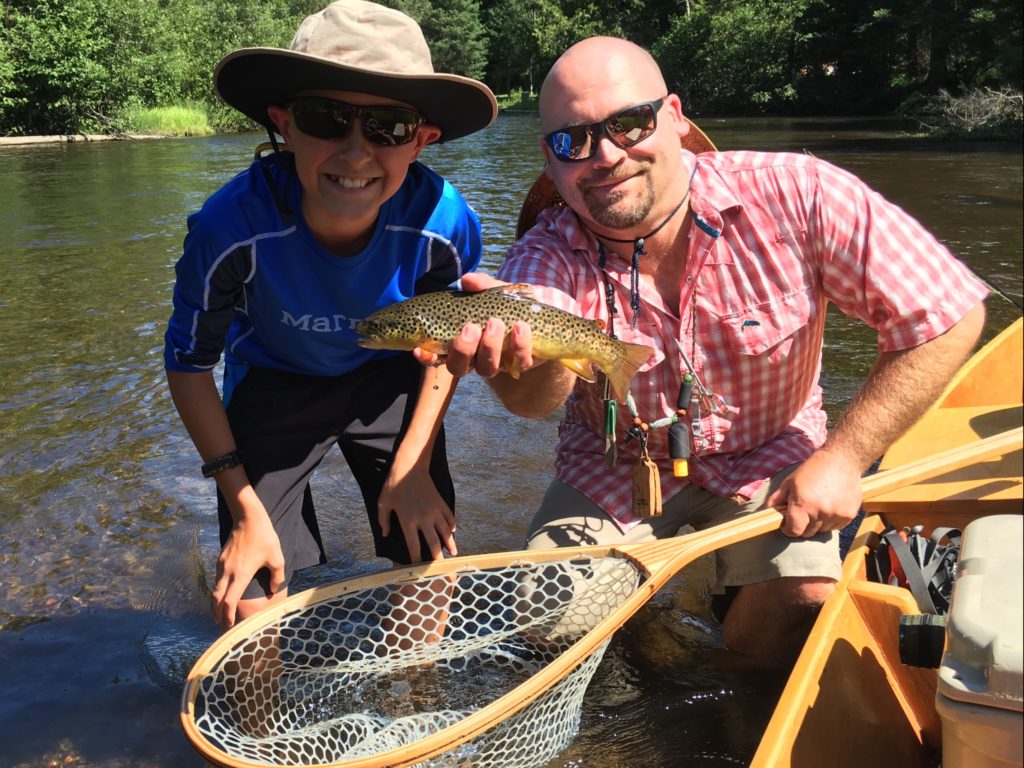 The tricos will spin very early tomorrow morning, and probably very heavily.  By the weekend, this will be a 9 or 10 am affair.  Likewise, the evening olive spinners have been hitting the water right at dark with this heat.  Once it cools down, there should be bugs on the water by 9 pm or even earlier, mixing with small caddis (a #18 Hemingway is a fine fly anytime after dinner) and some of the surprise yellow stones that have been hatching at dusk.

For some, the next two weeks of dark nights are night fishing weeks.  I’ve made it out a few times this past week.  Last Thursday Tanker and I put in on the South Branch and I cracked a dandy on my second cast, and a slightly smaller one a dozen casts later.  The second trout still had a hex on his mouth and he flipped free before I could remove the old hook.  He came from a spot my friend likes to fish, and so I emailed him and learned that it was in fact his hex.  “Bad tippet knot,” he wrote.  I was sorry not to have gotten his fly back…for both my friend and for the trout. 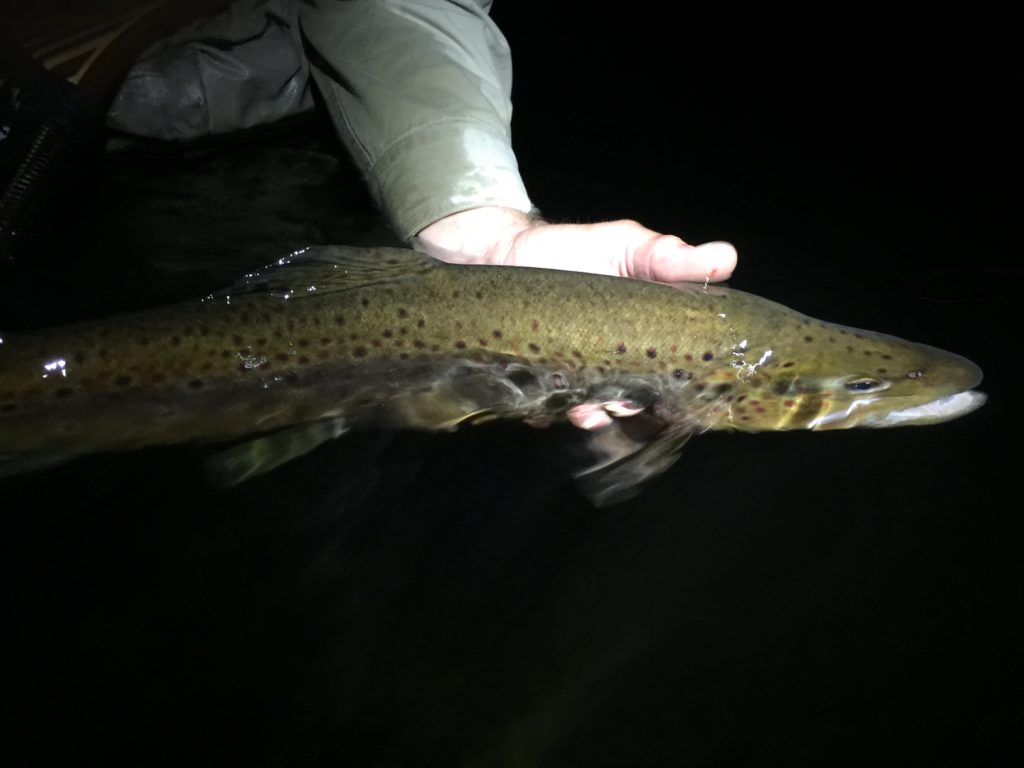 Last night I was on the Manistee on a hastily planned 9 pm let’s-go-camping trip with Katy and the kids.  I fished right around the campground, and heard what I thought were two bears snorting around the far bank…until I realized the snorts were just two people snoring in a tent!  The fishing was slow considering the conditions, but the stars and loneliness were spectacular.  Fishing by yourself at night is most disconcerting the first fifteen or so minutes.  Once you get past that, it’s a gentle, secret pleasure.  You can talk to yourself, the beavers tail-bombing you, the muskrats chewing on the grass, whatever broke that stick behind you, the trout.  You can choose to swing through a pool a second time because you’re not yet ready to climb into a tent with three sweaty, sleeping people and fight for a sliver of air mattress.

Night fishing is big adventure on paper.  In person, it’s pleasantly boring. And there’s a strange parallel to it.  We, much like the trout, are in the river, just idly waiting for something big to come by.

We have some great events coming up:

Small Flies with Ed Engle, Aug 20 and 21:  This is the best opportunity for anyone that wants to truly improve their small fly fishing to learn from, and fish with, a small fly master.  Ed will demonstrate how he ties his tricos, as well as his thoughts and theories on successful small fly fishing.  On Sunday morning, you’ll fish with Ed and see the flies and techniques in action.  This is a can’t miss class with the guy who wrote the book(s) on tying and fishing small flies.  Click here for more info.