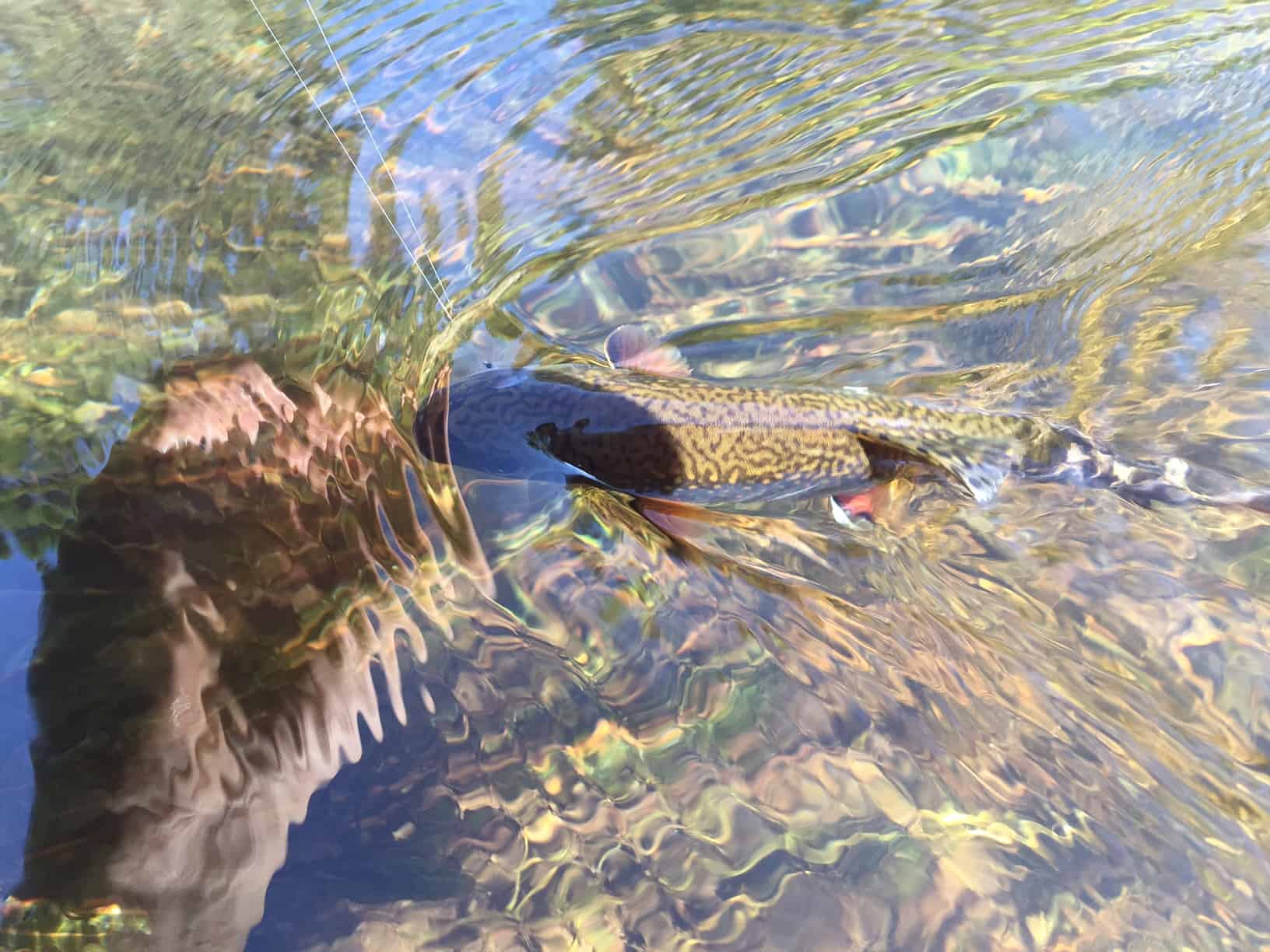 Anglers of the Au Sable President Tom Baird started tossing flies at trout when Jimmy Carter was president. So, one would think he would have seen just about everything on the river by now. Yet, until last night, he had somehow avoided the dance with the midnight devil.

He was a bit miffed when I told him to show up at camp at 9 p.m., but there’s no sense in getting in the water before 10 when you’re going to throw mice and gurglers. This is the waning season night anglers most enjoy – low moon with earlier darkness each night until the first autumn cold snap ends the fun.

The first ninety minutes of the float was entirely predictable…

“That’s because it’s a dark fly in the middle a dark night, Tom.”

“Am I getting it out there far enough?”

“Yes, Tom. A bit too far, actually, since I just heard the fly land about fifteen up into that cedar tree right there.”

But Tom Baird is a good listener. And after a few river bends of futility, he figured out how to put the fly in the right place. And he was on the right water in the right weather conditions with the right kind of big, ugly, waking piece of foam attached to his line.

Actually, the first big fish was a sipper.

Twenty-one inches of buttery slab later and El Presidente was no longer a virgin of the night. 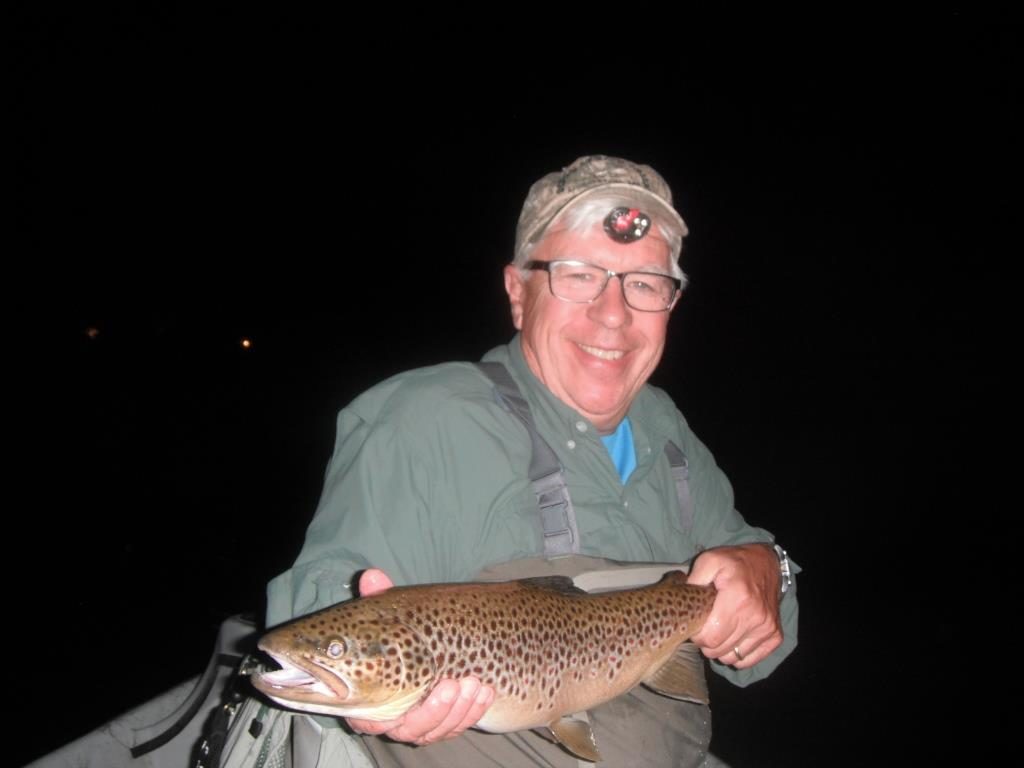 Twenty minutes later, after a 19-incher smashed the same half-destroyed gurgler right in front of Joe Hemming’s cabin, El Presidente sat back in the boat seat satisfied, stared at the Milky Way, and declared, “Maybe I won’t go trico fishing in the morning.”

I’d like to proclaim El Presidente a natural talent of the midnight hour. I’d like to take credit for guiding him into two board fish. Truth is, Tom’s haul was some kind of accident of physics.

I just walked into the fly shop. Tom is standing here looking like he could use six more hours of sleep. Josh is laughing and holding the same fly line Tom used last night. Tom noticed it looked worn, and now that he has a new night-fishing passion, he thought it might be time to replace it.

“You’re not going to believe this,” Josh says, as he holds El Presidente’s old fly line in his hands and breaks it in half with barely a stretch.

Tom can’t remember how long ago he outfitted his six-weight with this sewing thread. Perhaps it was back in the Carter Administration. I’ve seen strands of Twizzler licorice with more fish-fighting potential than what El Presidente armed himself with for last night’s float. Hell, this morning’s trico-eating brookies could’ve broken that fly line.

Yet, somehow, those two big fish stayed on the line last night.

I think it’s time for Tom to go to church and give thanks. 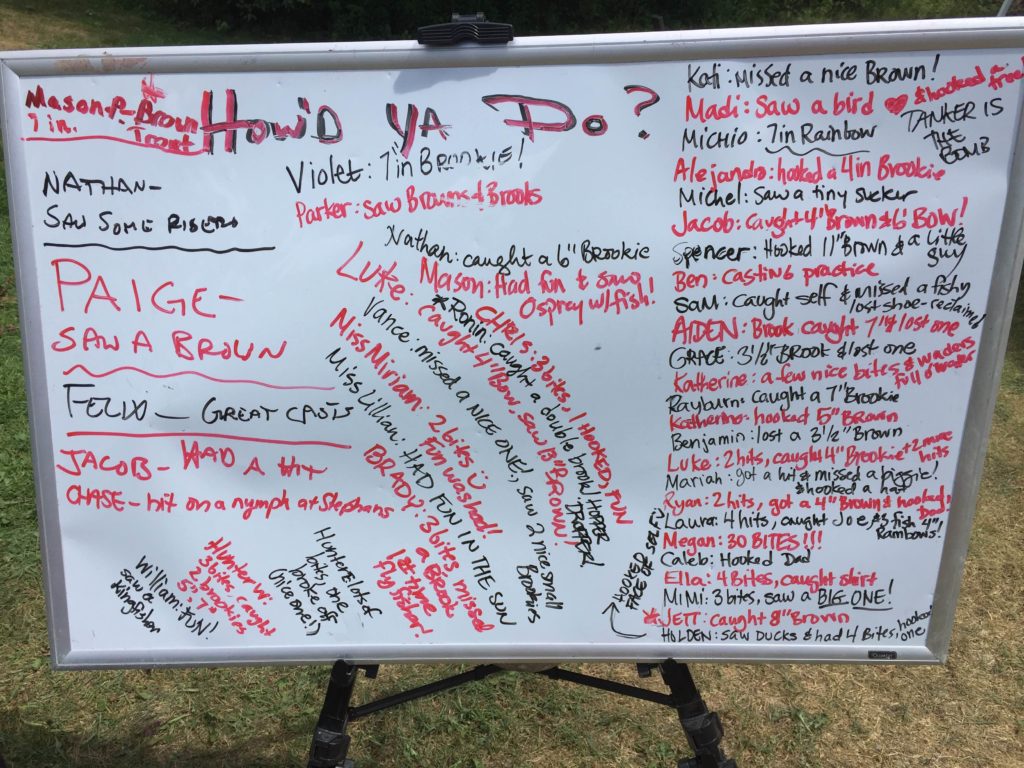 Well the Midnight Derby and the Kid’s One Fly (Box) Challenge were great, great fun.  We had 51 kids this year.  Wow!  Somehow no one got injured and we had a blast.  Special thanks to Dennis Burck for the the seemingly zillion flies he tied for this event for the kids, Scientific Anglers for the terminal tackle, the many donors who keep the sport alive for kids, and the many volunteers that made the event happen. 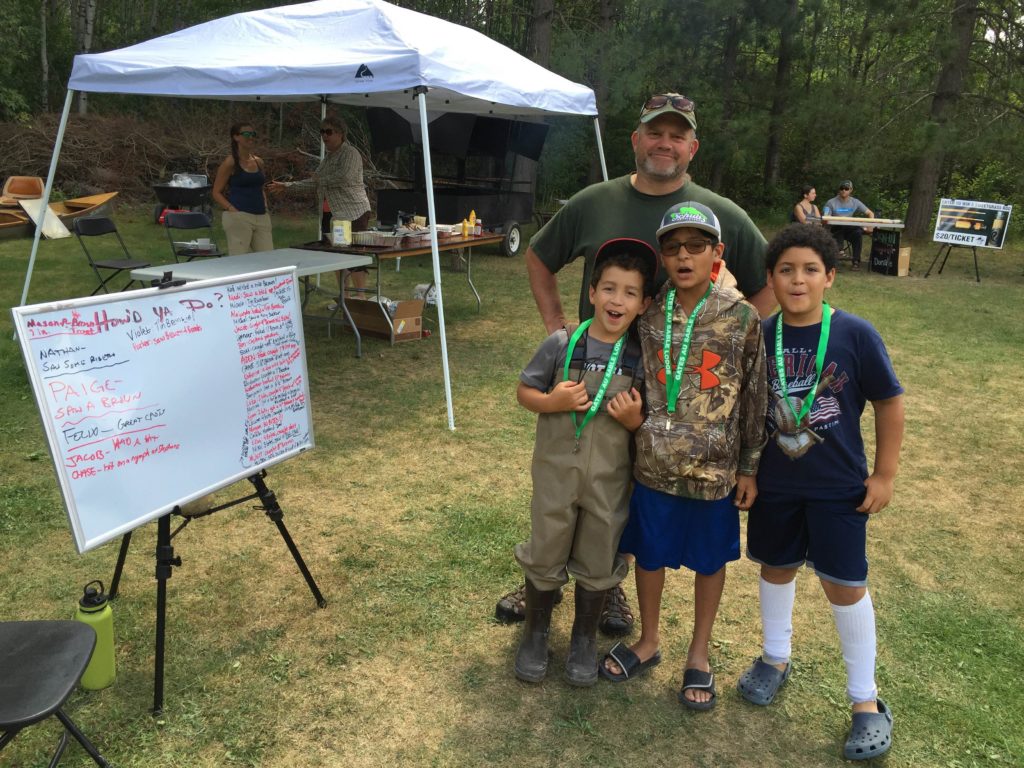 Tanker with some young anglers.  These kids could cast!

The Derby was equally fun.  Chef Haley nailed the brisket, Chef Emily nailed the cupcakes.  The fish were biting (by far the best night we’ve had so far in five years of fishing), and by 3 am we had two guitars and a mandolin going, a good fire, and a lot of friends. This event raises money.  It does so because of support this year from Hatch Reels, Scientific Anglers, Patagonia, Sunrise National Distributors, CF River Products, Dry Fly Sales and Douglas Outdoors.  The best part: Headwaters Trout Unlimited is going to donate the money back to the fish farm fight…and match it!  That’s gonna translate to about a $4,000 fundraiser in one fun and fish-filled night.  Thanks to everyone that participated — that’s the real support. 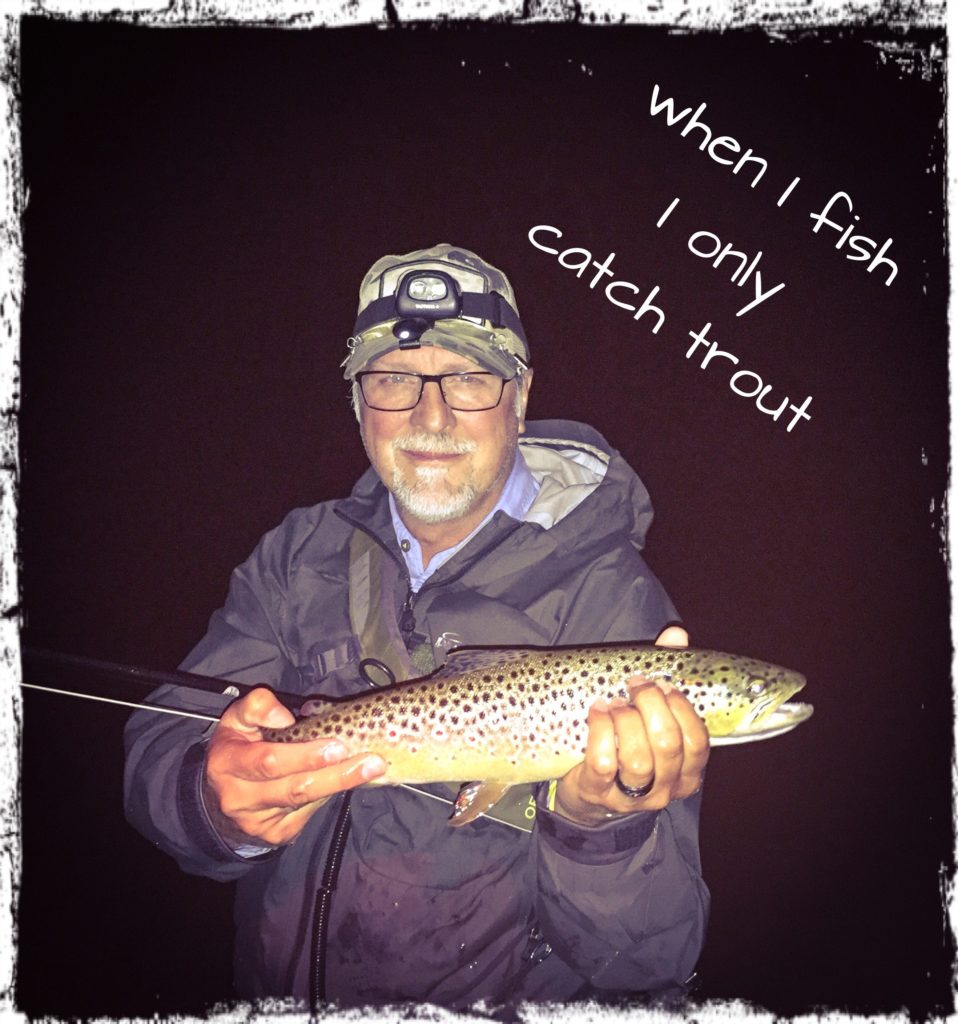 We have fun at the derby!

The fishing has been better than the weather.  The weather has been stupid hot and clear.  The morning tricos have been awesome.  After waiting all summer for an opening, I snuck out with my trico fishing friend Terry W to hit a few good riffles. 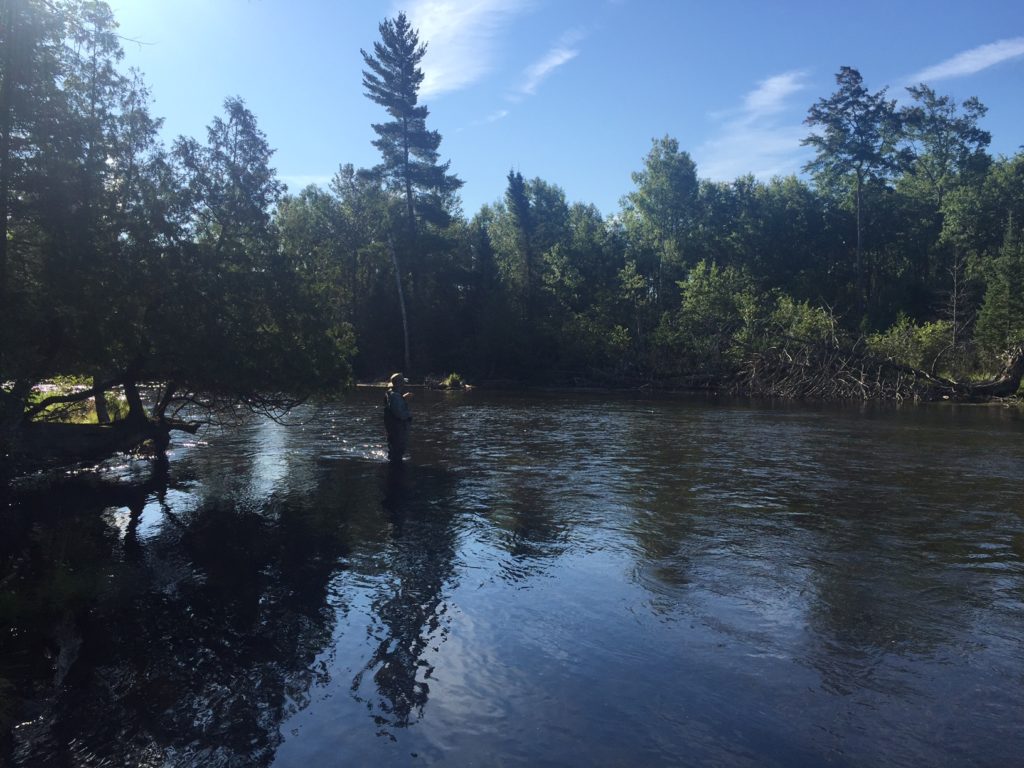 They’re just about to hit the water

Why this hatch doesn’t have more appeal to more anglers, I don’t know.  On the plus side, for those of us that do love tricos, the river is pretty much always open and uncrowded.  As soon as we hit the river, the tricos were on.  A half hour in, and there were pods of dozens of fish just showing heads.  They aren’t big trout, but then again, the tricos aren’t big flies.  But there are SO…MANY…OF…THEM — trout and tricos both!  I was taking the Douglas Outdoors Upstream fly rod, in a 3 weight, for a spin.  It weighs less than 1.5 oz.  It is a great trico rod.  Sold the sample today…and more on the way.

The good fishing continued throughout the afternoon, according to the guides.  Small attractors fished on long leaders and fine tippet.  Examples: flying ants (innocently filed under “attractors” because I haven’t seen an ant with wings since June), Hippie Stompers (fished on 6x fluoro), Adams (always) and Patriots (also always).  In the evenings, there is a single heavy spinner fall of tiny olives, but anglers just wading through a cool evening fishing the orange sedge or an Adams should do just fine.  With Mio far too warm to fish, so far the upper rivers are handling the heat well.  We are anxious for some rain Thursday night and into Friday.  The river is very low, very clear, and in the high 60s at noon.

Small Flies with Ed Engle, Aug 20 and 21:  This is the best opportunity for anyone that wants to truly improve their small fly fishing to learn from, and fish with, a small fly master.  Ed will demonstrate how he ties his tricos, as well as his thoughts and theories on successful small fly fishing.  On Sunday morning, you’ll fish with Ed and see the flies and techniques in action.  This is a can’t miss class with the guy who wrote the book(s) on tying and fishing small flies.  Click here for more info.

This will be our second year of producing a print catalog for those that still check their mailboxes!  Good back of the toilet material, if nothing else.  This is a print catalog, so we’ll need your mailing address.  Email it to me at [email protected] to get on the list!