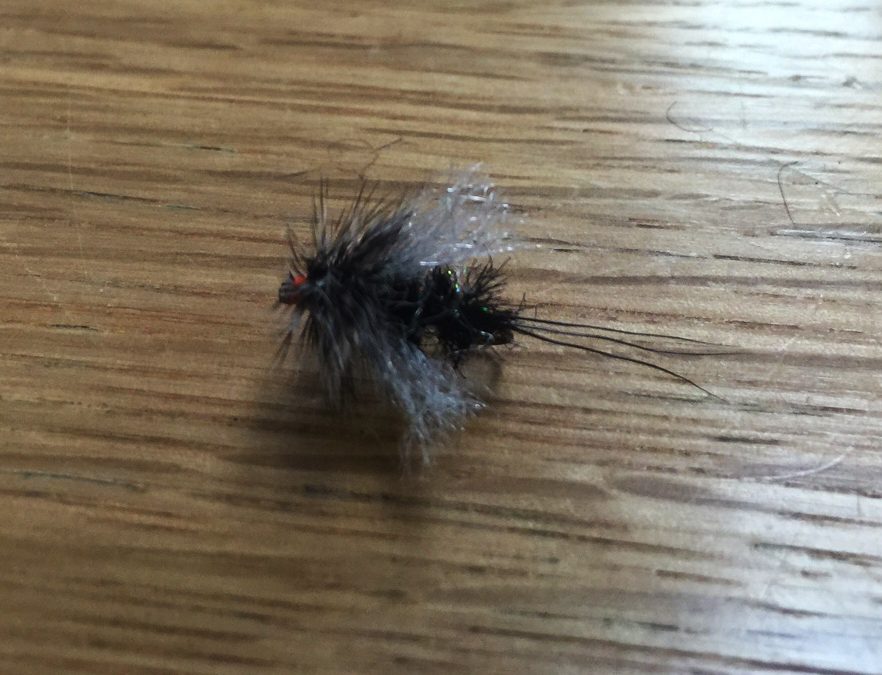 The Awesome is one of my favorite flies.  It works from June thru September, but is at its best on the hottest days of early July, when the deerflies are mating.  You’ll see masses of them on the undersides of bridges, or on the bottom of the Au Sable’s famous cedars.  When it comes to terrestrials on the Au Sable, the deer fly and the ant are neck and neck in overall importance.

Back in the day,  The Awesome was tied on some post-fab hook with a wire parachute post by a mad scientist who had derived it from the Lake Erie Special (I think).  Many of you already know it: moose tails, peacock body, delta style spent grizzly hen, parachute grizzly hackle.  It’s a pain in the butt to tie, and only one of our commercial tyers has the guts and prerequisites to tie it.  Sorry Chris.  Here’s an easier alternative tied without parachute: 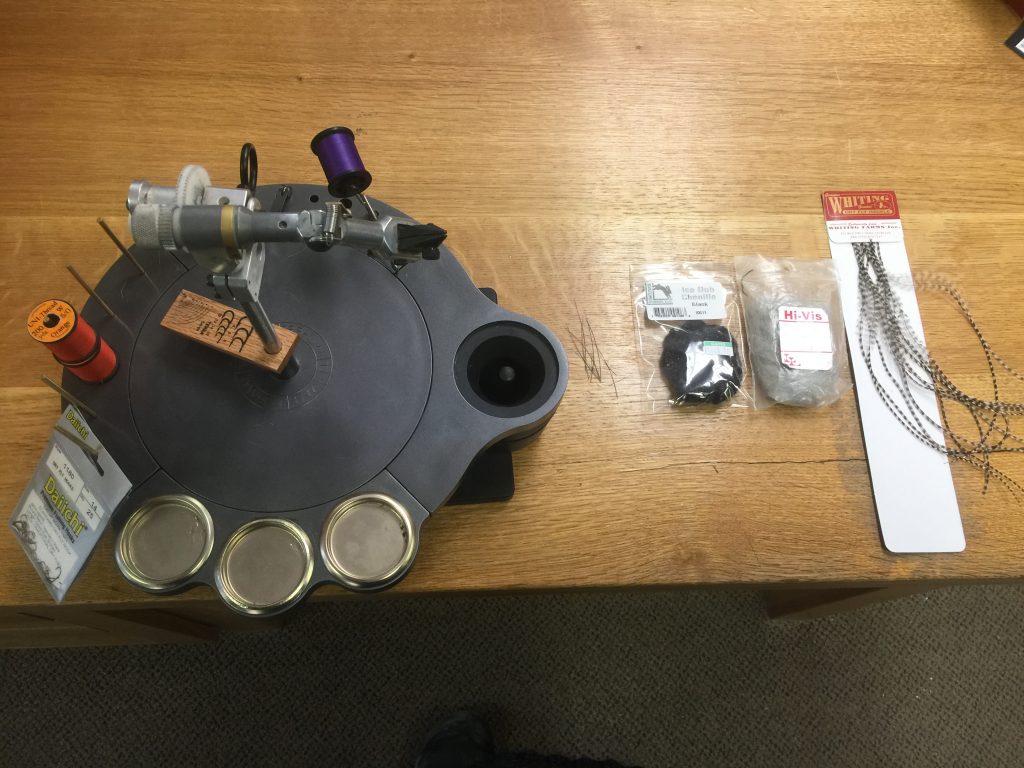 It doesn’t take much to tie this fly.  The giant base-thingie attached to my vise is the Ty Wheel.  I think this is the best tying invention this year. 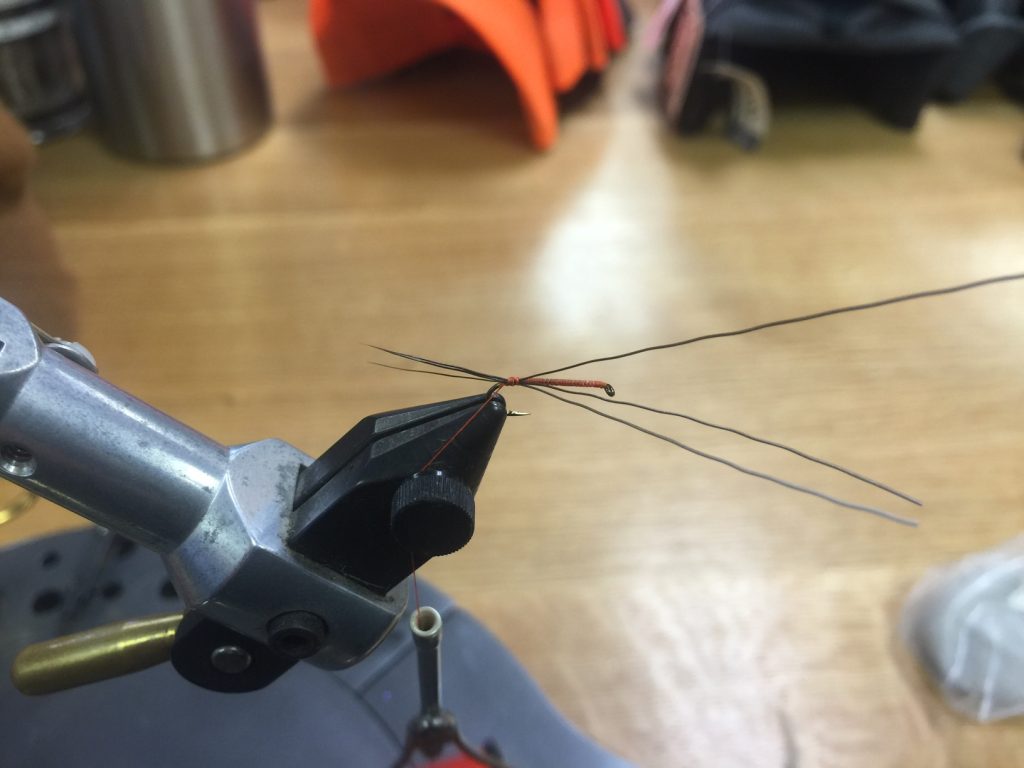 Start thread and add 3-4 moose fibers as tails.  I like them the length of the hook shank.  Why tails on a deer fly imitation?  Don’t know.  But I think the tails not only adds floatation, but they also allow this fly to do double duty.  Part bat fly, kinda iso, with some deer fly mixed in.  Awesome. 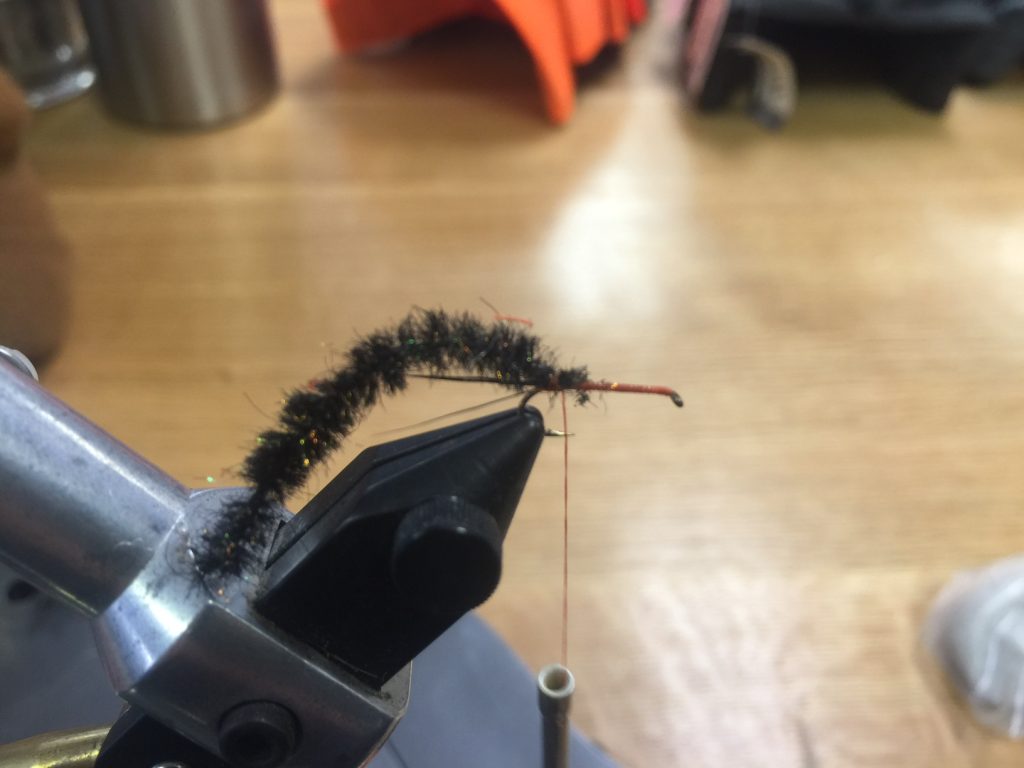 Lash on the ice chenille.  This stuff looks big if you wrap it tight, so I space the wraps.  Denny turned me onto this product as a peacock alternative.  The advantage to this synthetic substitute is speed and strength, not to mention uniformity.  If you’d rather use peacock, I don’t blame you.  You’re going to wrap it up the hook shank but stop well back from the eye. 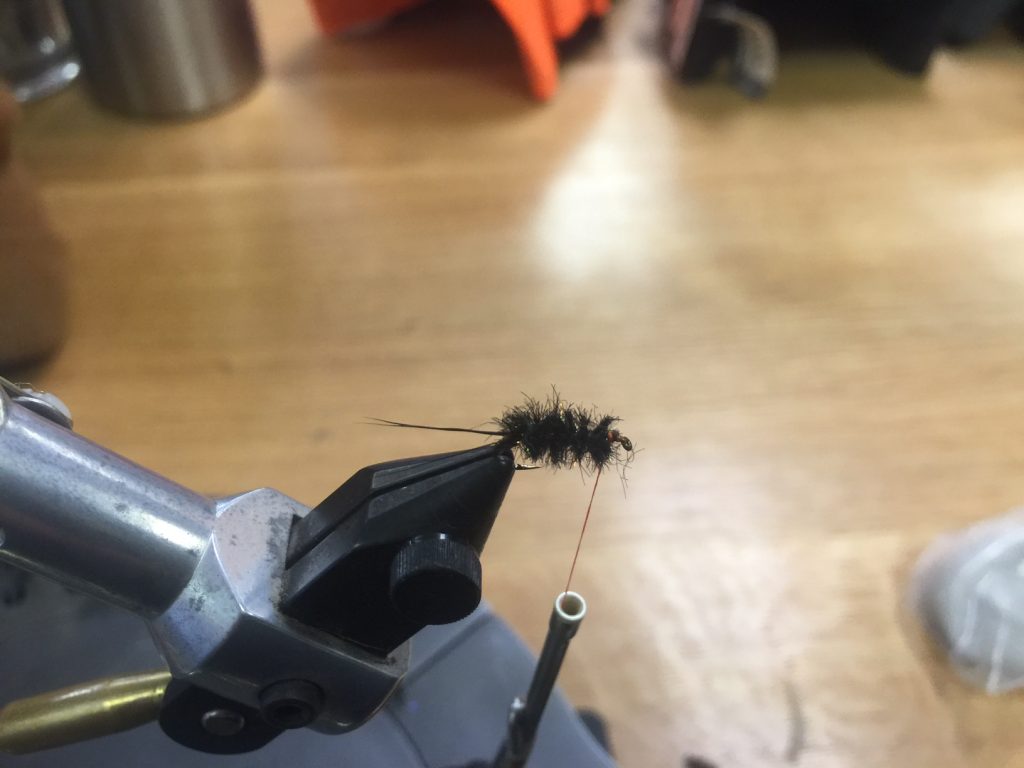 I went just a bit too far forward here so I’ll back-wrap with the thread.  I want to tie the wings on 1/3 of the way back from the hook eye. 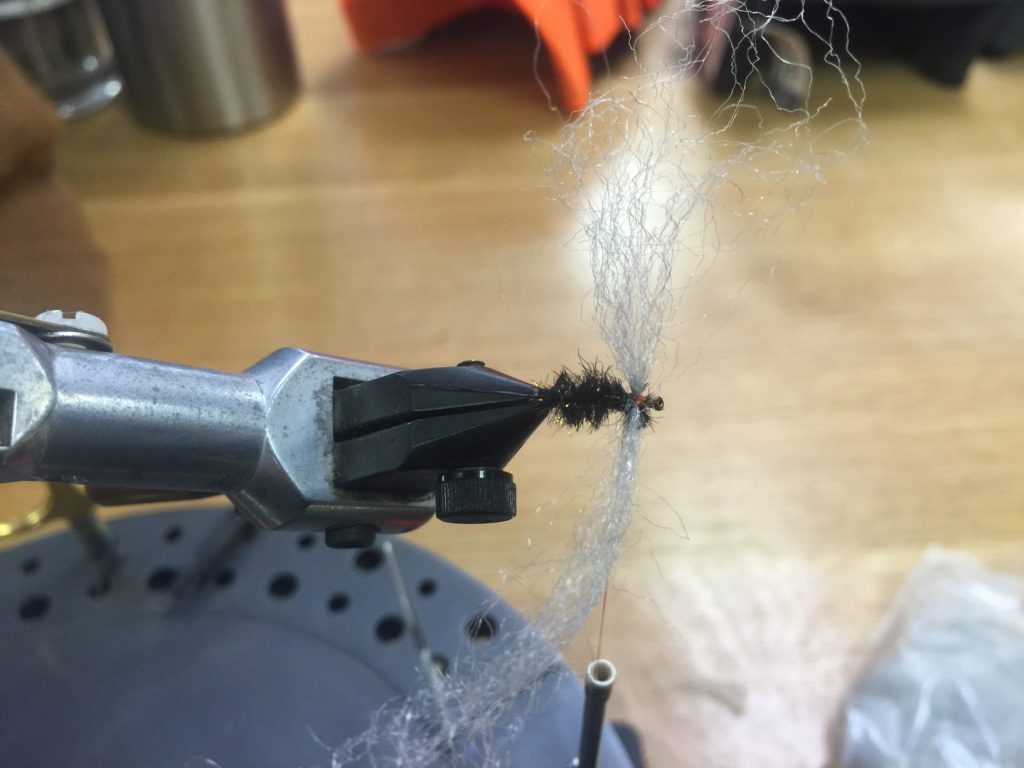 To do this, I lay a strand of Hi-Vis perpendicular to the hook and gently wrap the thread over it.  From right to left and then from left to right, forming an “X” of thread wraps on top of the material. 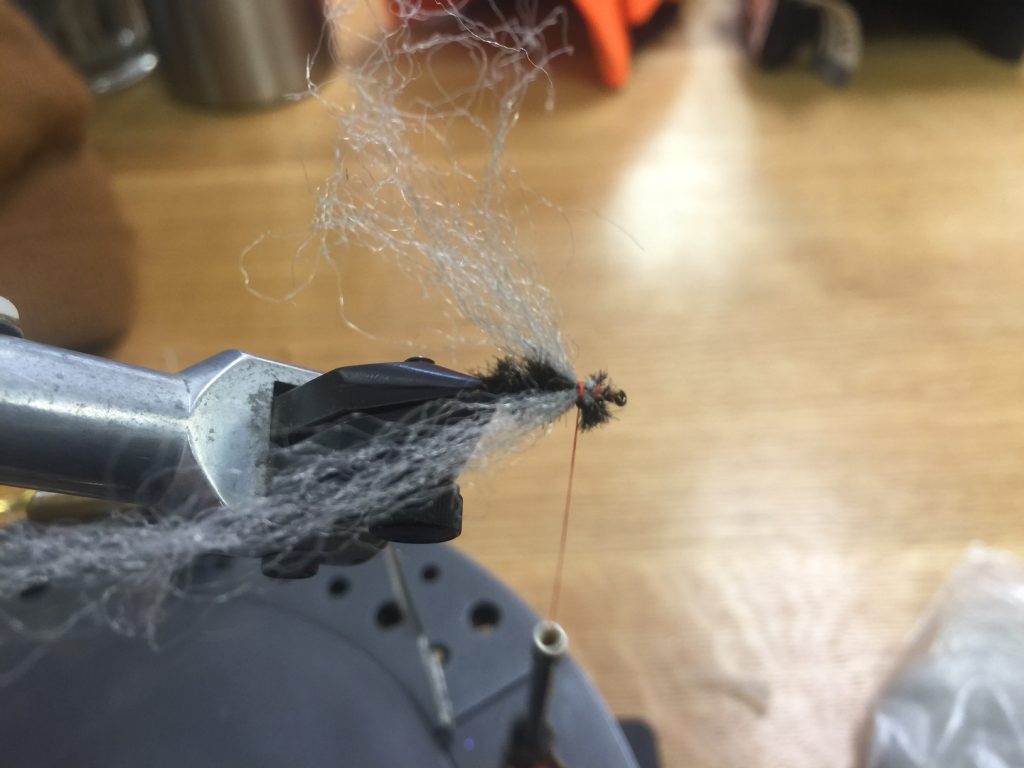 Pull the wings back and wrap the thread over both wings so they are on both sides of the body.  Now trim so they end around the butt of the fly. 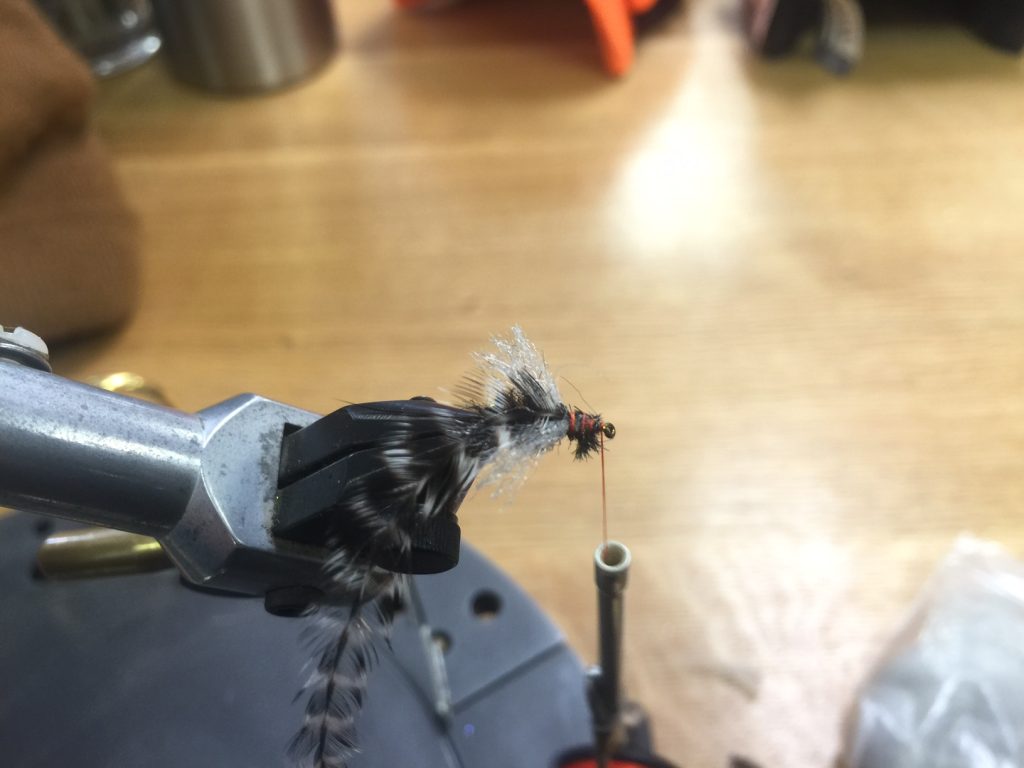 Now add hackle just in front of the wings.  Leave the thread behind the hook-eye.  Wrap the hackle as evenly as possible and as tightly as possible.  This will really help the fly float. 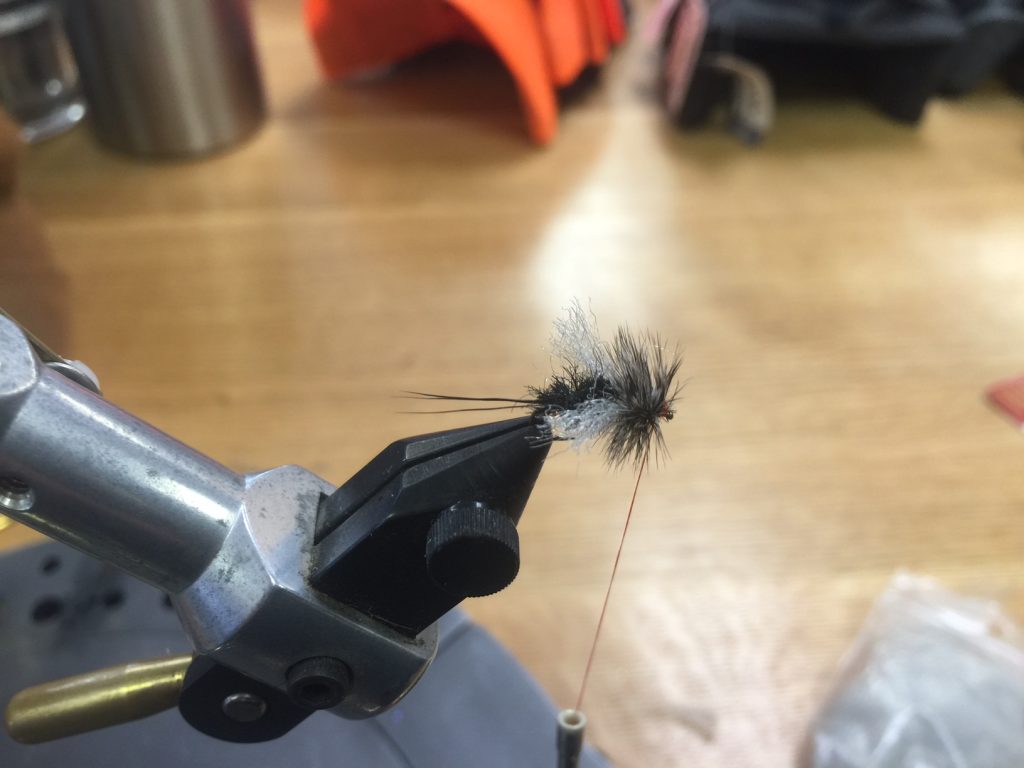 The finished fly, ready to be knotted and set afloat, drag free, beneath the shadow of a cedar.