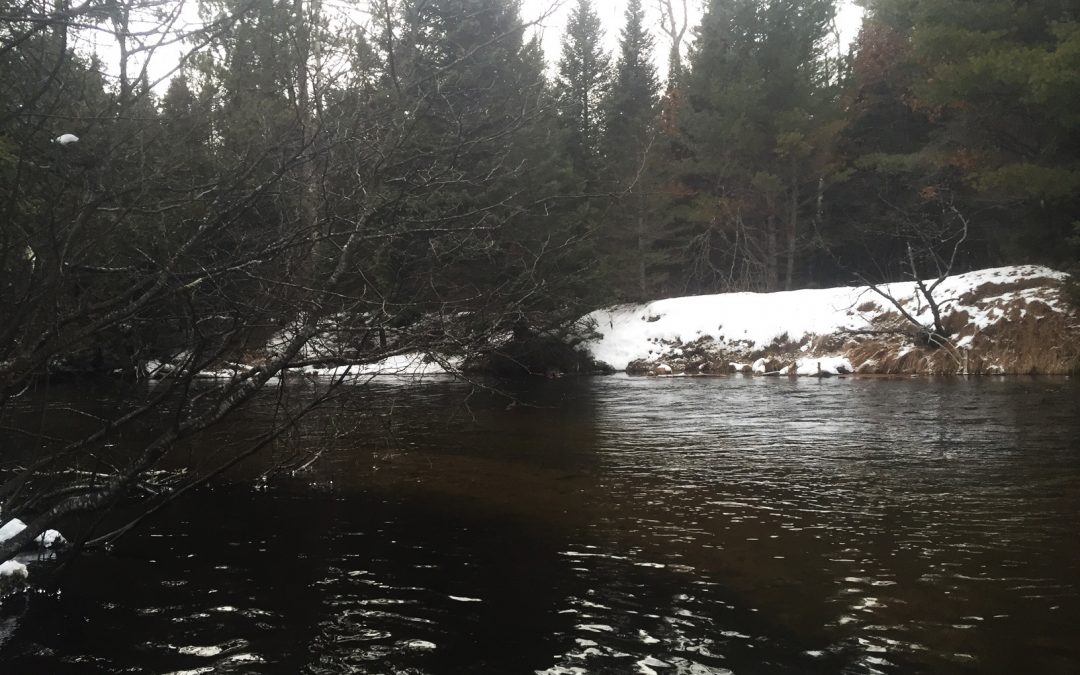 I just got done losing a big trout.  A monster.  I was sneaking up the inside of a favorite pool when I saw the fish sitting tight to the bottom in about four feet of water.  It was the backside of a sand hump, and the trout had its nose an inch from a log perpendicular to the current.  Two feet to the right, an abyss of depth and dark water.  To the left, some sunken cover.  This fish was sitting in a natural soft winter spot.  It looked big.  It was actually bigger than I expected…but finding that out took some time.

And some flies.  Mop fly, pheasant tail, bead squirrel, prince, black Copper John.  4x.  5x.  6x.  I smushed on some tungsten putty.  Removed it.  Tried it further up the leader.  Of course, there was a cedar tree behind me.  That’s how it is.  The trout was happy, sliding back and forth, feeding.  A happy trout wags its tail.

I spooked an unseen trout ahead of the big trout on a bad cast.  I snagged the cedar.  The wind blew and I couldn’t see the fish for long minutes.  It was near dark.  But near dark, in the winter, is prime.  I used to try to be out at noon.  But a few late afternoon streamer trips on the Manistee convinced me that in the winter the sighting, and the feeding, is just as good if not better at last light.

Eventually I hooked the fish on a plain jane Whitlock squirrel nymph fished behind a tungsten-beaded fly on 6x.  It rolled, and came up shaking its head in slow-motion.  It was a big hook-jawed male, a few inches over twenty I figured, heavy all the way through.  My breath quickened, fogged my shades.  The trout dug for the jam across the river and I eased off of it, and stuck my rod tip under the water, and let the fish hold there.  I turned the rod upstream and led it to the middle, and I was feeling pretty good about my chances until the trout came to the middle of the river, rolled, and the fly peeled out and came flying at my face.

I would have been happy for that lost fish to be my last fish of the year.  A big one lost is a good way to end it, I think.  Anticipation of the new year, and all that.  But I couldn’t resist the next fish, an eleven inch brown, that chased the big lead fly down the river about six feet and ate it swimming away, hooked itself, leapt, and then basically fell asleep on the line.  Easy in, easy out.  I smacked my hands to warm them, and snuck out, my boot tracks finding what looked to be bobcat tracks. 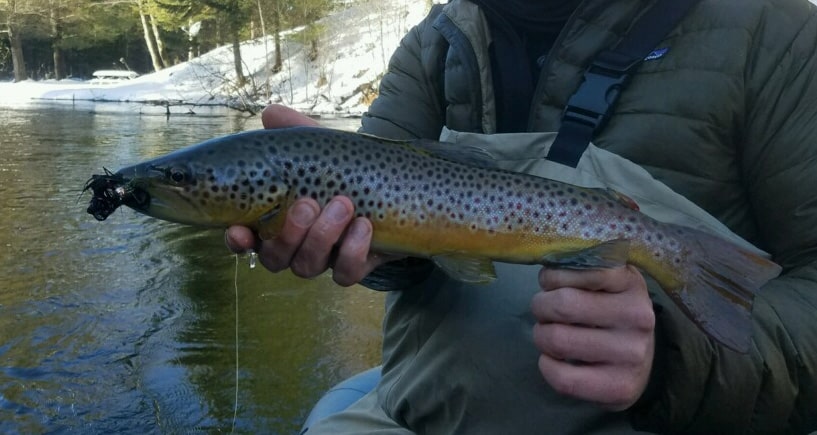 This angler was “sick” on a beautiful December day…hence the crop job.

Bring on 2017.  Bring on an early spring…or a late spring.  We’ll chuck streamers in a snowmelt flood, or stalk rising rout up a bubble line.  We’ll nymph a shadow on a sunny day.  Here’s to a mild winter, a reasonable administrative judge in the fish farm case, and trout rising at dusk, everywhere, as far as the eye can see.

I can’t wait for the new season.  To some, it’s months away.  Many other will be out this week to close 2016 and begin 2017, battling frozen guides and hangovers.

We have a couple of New Years events approaching:

Sponsored by the Mason Griffith and Headwaters Chapters of Trout Unlimited

Ned Caveney was the first forester in the Pigeon River Country and later Chief of the Forest Management Division of the DNR.  He has hunted and fished all over the world.  Several years ago, he decided to go to Mongolia to hunt and fish for Taimen.  He took his daughter Heather with him, and she fell in love with his guide, Zorig, and they eventually married.  Zorig owns and operates Taimen Tours.   Zorig and Heather are coming to the U.S. and Michigan for Christmas and have graciously offered to share a presentation on angling for Mongolian Taimen, the largest trout species in the world.

Cost:  Donations will be accepted to cover food costs, any excess will be donated towards the fight against the Grayling fish farm.

Please RSVP, space will be limited.

And our first Free Fly Tying Saturday is on Saturday, January 7.  RSVPs help us make the right amount of chili, as well as ensure that we have enough tying spots for everyone.  Click the link above for more details.  We look forward to another winter of hooks, hackles and laughs.