Well it looks like it’s over, but what a thaw it was.  We lost literally tons of snow.  The rivers stained up a bit (not much), the South Branch came up quite a bit (the gage is down but it is definitely high).  Anglers were able to hit all three branches, the lower river, below Mio, and the Manistee.  People got stuck.  Tires spun.  Trout were caught…and a few jumbo pike. 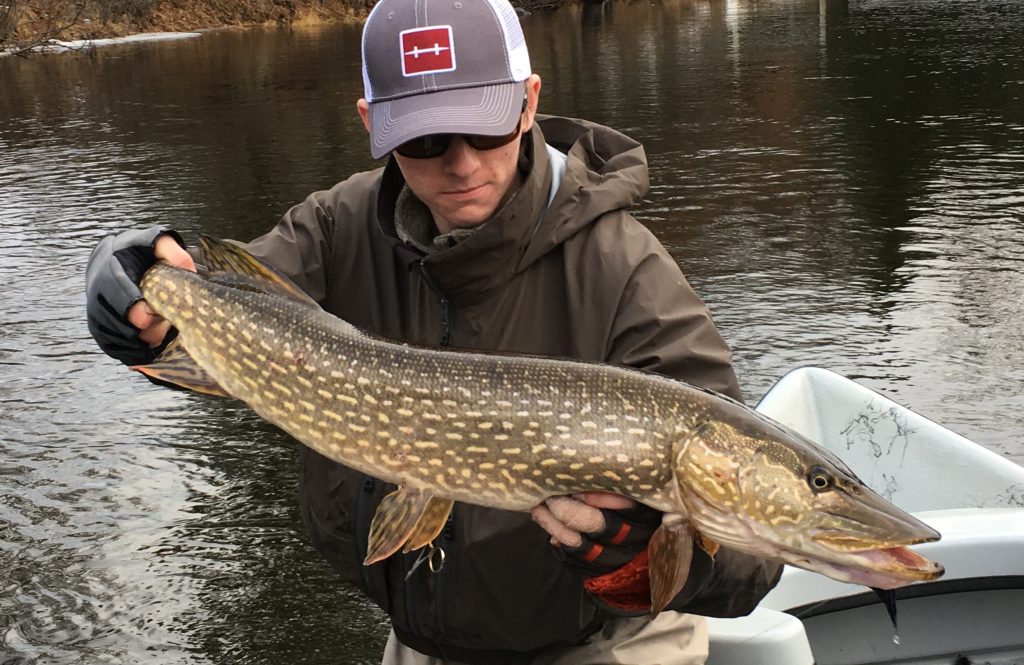 It was awesome.  It’s hard not to love a mid-January heat wave, especially one that lasts a few weeks.  The next ten days aren’t too bad either.  Frankly, I’m glad for some below freezing temps and a little snow.  The ski trails will be in fine shape with a re-freeze and a dusting, and I’m not ready for ice fishing to be over.

Everyone was fishing this past weekend!  It was cool.  We filled the board room with fly tyers — a great class with beginning, intermediate, and expert tyers — ate chili, burned a fire, and then hit the river.  Robert and I snuck in some sight nymphing.  We had at least a dozen shots at trout, and hooked at least half of them.  There are a lot of fish in the river, particularly in that 8-14″ range.  It’s great to see.

The next day I floated with my friend Kevin and we saw tons of trout.  We landed a few…but we were humbled by many.  Black seemed to draw the most interest…but dirty yellow caught the biggest.   Most of the day the trout were swiping, nipping, following…but not eating the fly.  I think trout will sometimes mouth a streamer without closing their jaws on it.  A few of the fish appeared to eat and I just kept stripping and never felt a thing.  It went like this for the whole afternoon.  We had a few huge trout come to the fly.  One rose to a streamer in a backwater like a six-incher to a trico, except it was to a 5-inch long fly.  It was an enormous trout.  Got a date with that one next week!  But it was one of those days.  Case in point, on  Kevin’s last cast, right at the take-out, he hooked up with a nice fish.  I filled my waders trying to net it and still didn’t succeed.  Sometimes you lose them.  In the winter, it’s nice just to see them.  But there is a certain joy when you get to hold them:

We’re thinking spring now.  Big time.  We’re preparing our spring catalog and starting to put the finishing touches on our 2017 calendar.  We’ve got some new, fun stuff on the horizon both in the restaurant and in the fly shop.  If you want to sign up for our spring catalog, email me your mailing address: [email protected]  More to come…

And don’t forget to check out our next Free Fly Tying Saturday on February 4.  These are so cool.  Make it a weekend!  Grab a room (our winter rates are $60 single/$75 double), tie some flies, go skiing, go fly-fishing, go snowshoeing, and relax.