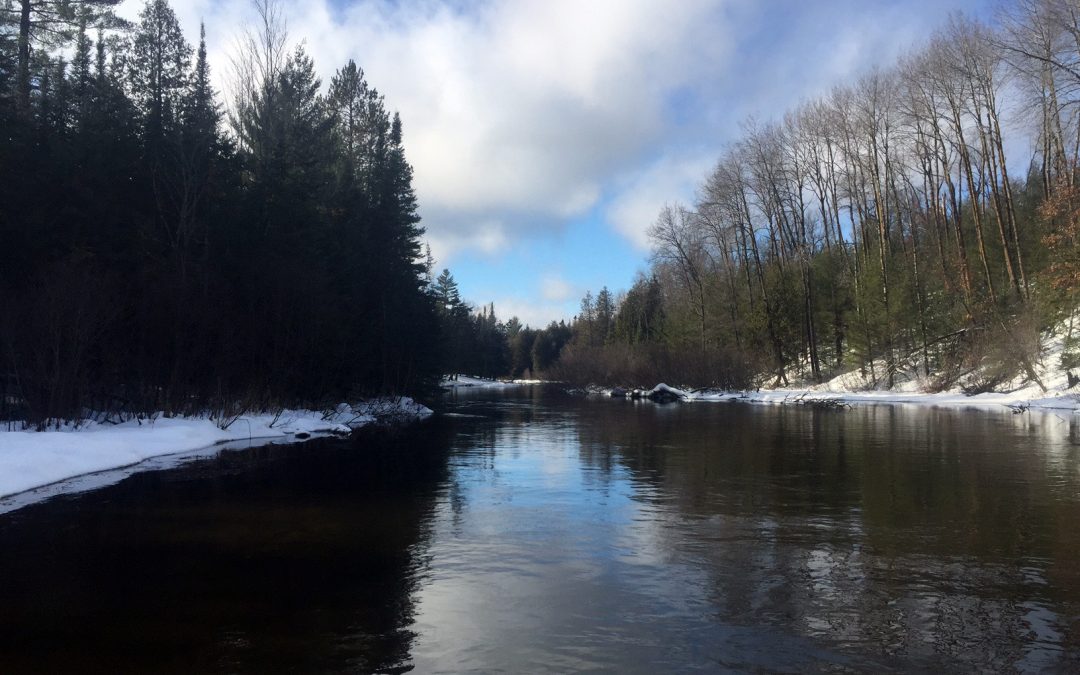 It felt pretty near perfect to be out on the river today.  This morning was warm and foggy and school was canceled (I discovered this after I arrived at a vacant school with kiddo in tow) due to the still icy back roads.  But after some work, it was time to go fishing.  The conditions were ideal: slightly stained water, air temps around forty degrees, and cloud cover.  Shortly after we launched the skies broke and by 4 pm it was a windy, bluebird day.  It felt too much like March.  Enough really to sorta break your heart.  There are many more cold days and colder nights in store for us.  There are frozen water lines and buried vehicles.   But you don’t think of that stuff.  You tie on your yellow and olive, your black, your olive and white, your copper, and you fish hard.

They weren’t on, but they were on enough.  The lone landed trout was a nice one, and ate a black streamer jigged across a muck flat.  The others followed, flashed, and swirled.  We saw one pike that was probably around three-feet long.  And another mysterious weight — almost certainly a trout — got off at the boat. 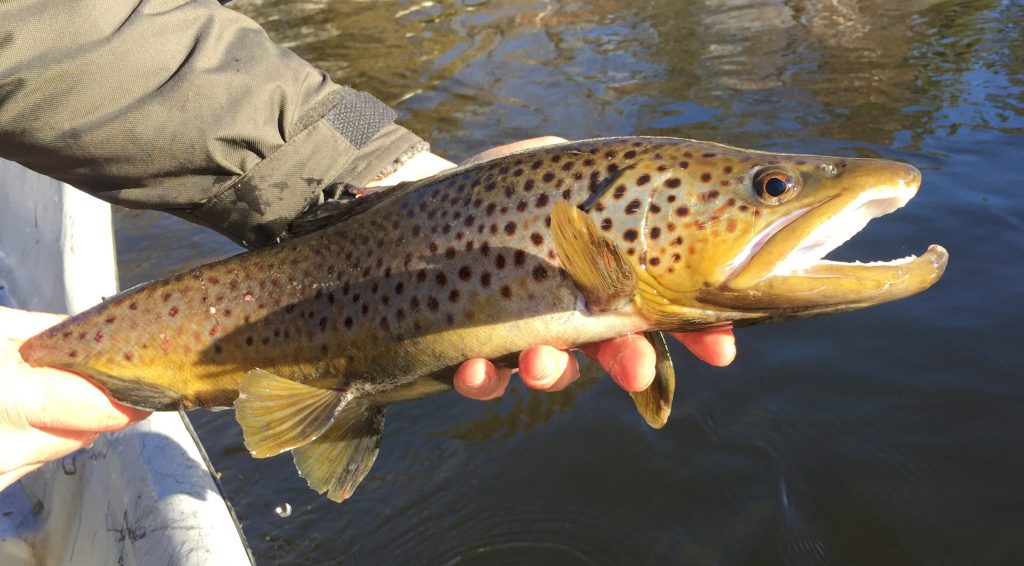 In the winter, the life is by the river.  The shelf ice is riddled with animal tracks as a variety of animals, from bobcats to raccoons to otters and minks, hunt the transition zone for food. 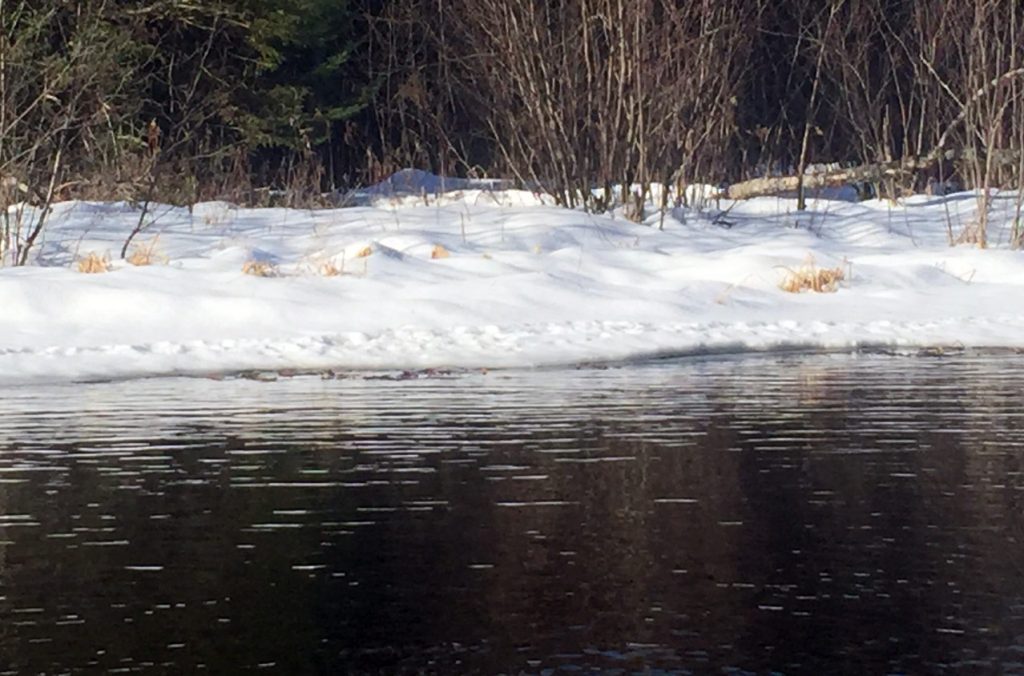 A bunch of tracks by the river 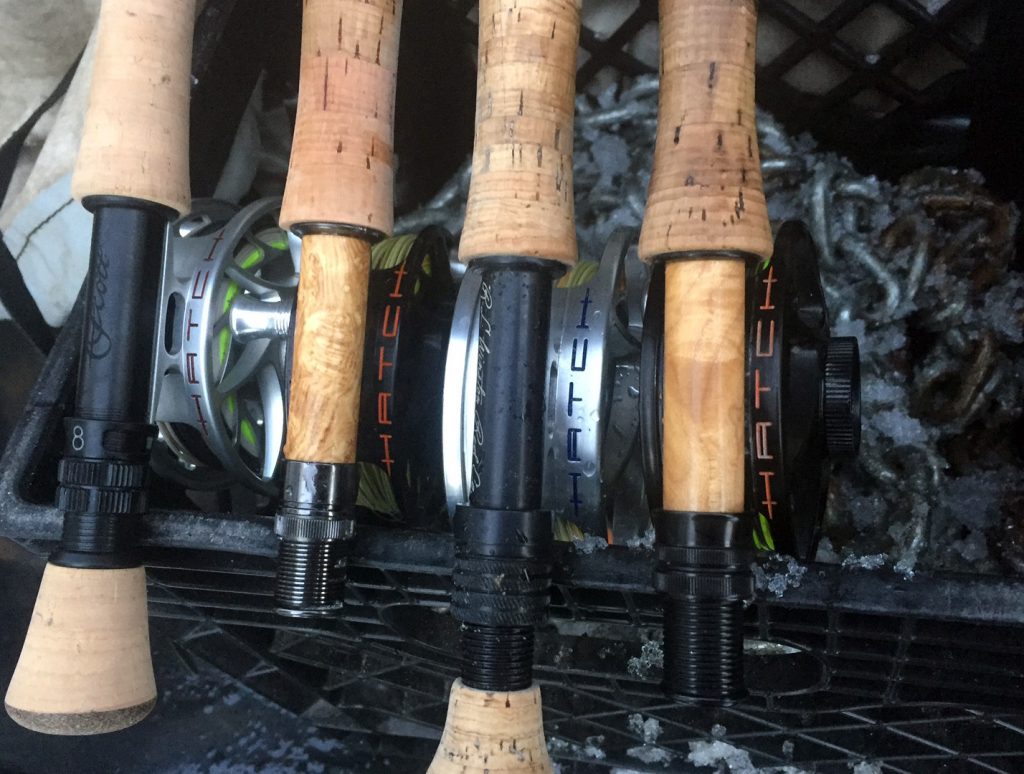 This warm spell will carry on right through the weekend.  If you want to try winter fishing, now is the time.  For those towing a boat, most of our usual floats are ice-free, but the take-outs are a beast.  Bring chains or sturdy rope.  Bring a metal shovel.  Playground sand is nice too.  For those wading, park by the road and enjoy the extra walk in.  It’ll warm you up!

You can’t go wrong nymph fishing or streamer fishing right now.  Today our best fishing was on olive and yellow, as well as black streamers.  I’ll bet a nymph angler would have done fine today nymphing small streamers or beadhead nymphs in sizes 12-18.  The river is still pretty low and, while stained, fairly clear.  There’s plenty of snow in the woods — well over a foot — and so there’s not a lot of snowmelt actually finding the river…which is fine for us.  We’ll take the heat without the run-off.

We’ll be tying flies this weekend at our second Free Fly Tying Saturday of the year.  Learn to tie, or learn a new pattern.  Learn a new technique.  Eat some chili.  Go fishing!  See you there…