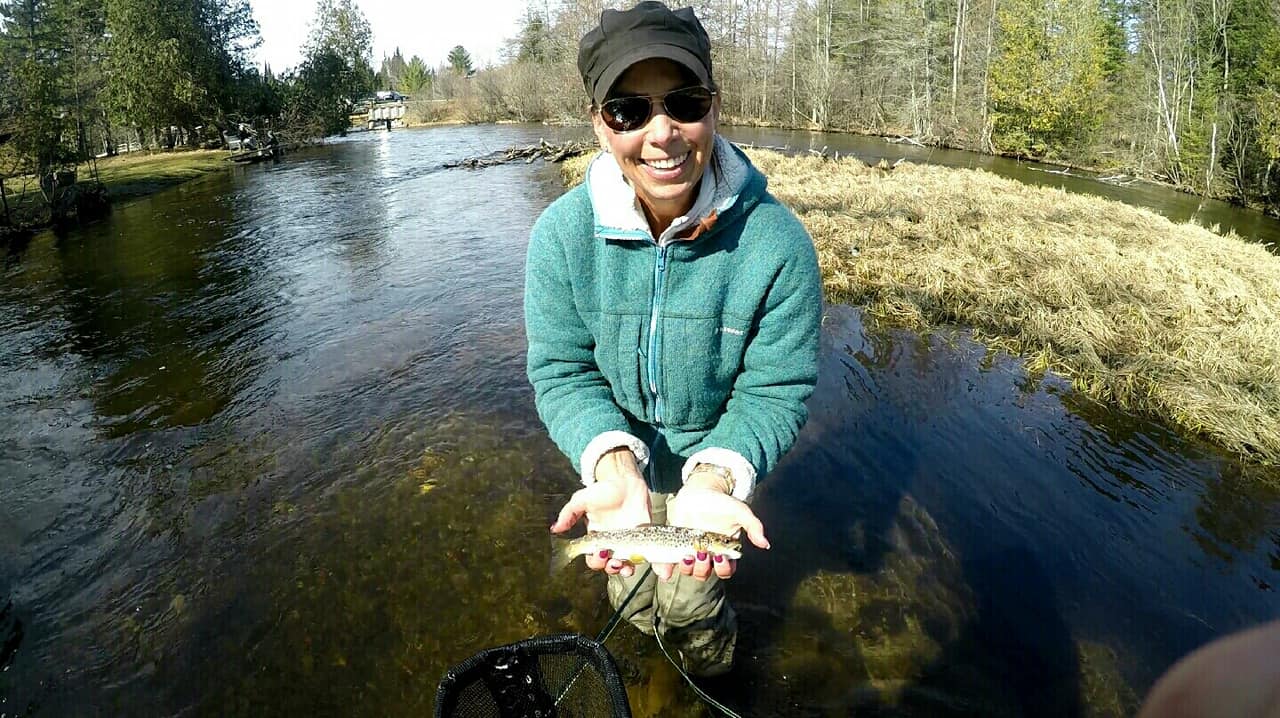 Fly fishing can be divided any number of legitimate ways.  Classic and Modern.  Dry and wet.  River and lake.  But this week it seemed divided into certainty and uncertainty.  Over the last few days, I cast at several rising trout with the certainty that they existed.  I also cast into numerous deep and foreboding pools for both steelhead and trout with uncertainty that any fish at all existed.

“What are the chances there’s a steelhead in here?” I asked Zach, as I swung a fly through a pool on his homewater.  This must be the ultimate rude question for a steelhead aficionado.  But for us trout guys, spoiled on the excesses of resident trout, it seems pertinent if not necessary for our well-being that we have some level of confidence.

He paused.  His black lab ran in the tag alders behind us.

Actually, it was 100 heart-throbbing percent. 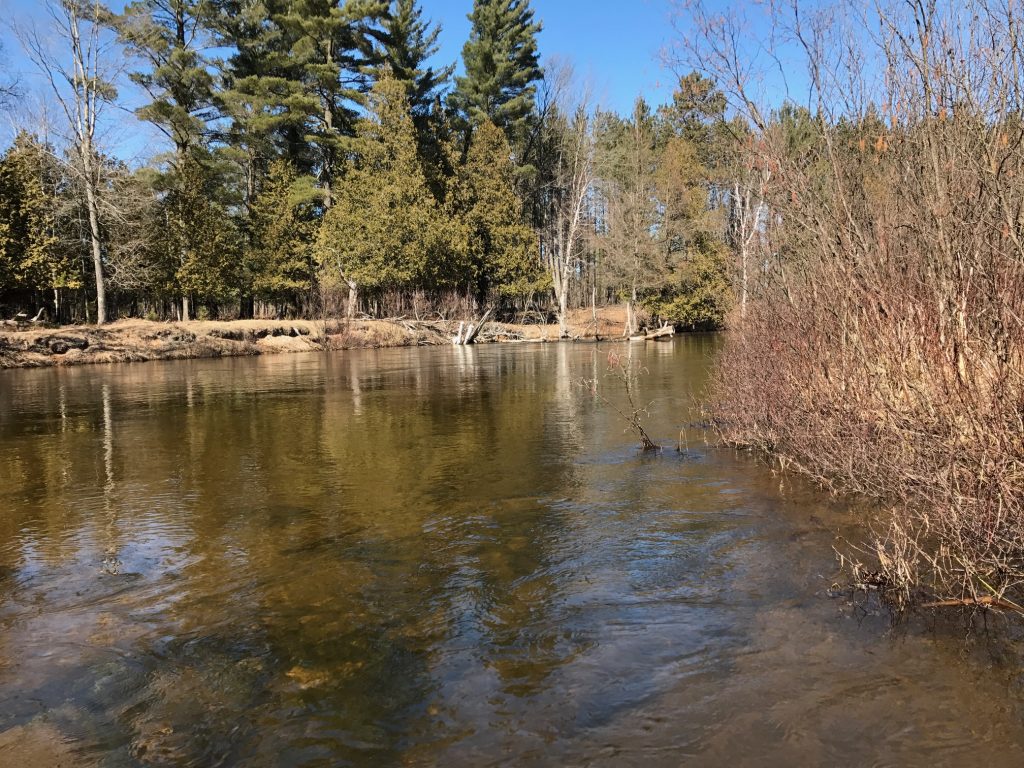 I began wading upstream and saw on the sand a giant male trout finning in two feet of water.  I have sight fished to large trout, but this might have been the largest I’ve seen actively eating nymphs in Northern Michigan.  Further study of my pack revealed that missing with the black stones were all my nymphs except for the one – and there’s always one – hooked into the soft receiving end of some Velcro.  It was a beadhead fly with rubber legs, and it was all I had.

As I knotted on my lone nymph, the trout moved slowly three feet to the left and ate a natural with all the ease, practice, and nonchalance of some ancient king plucking an olive from the stone snack table.   Then it was my turn to try.  The presence of the trout was certain.  But certainty in trout fishing floats on a sea of anything-can-happen.  After a few casts, the huge trout slid right and ate my nymph and I pulled the fly right from his mouth and he spooked to deep water.  It mattered a lot to me at the time.  I could scarcely think of anything else.  But now cooler minds rule once again and I view it as some karmic downpayment for the steelhead landed the next day.

This moment right now, on the eve of a forecasted five to eight inches of snow, the trout calendar is at the convergence of certainty and uncertainty.  In two weeks we’ll be casting at rising trout that we know exist.  And two weeks ago, we cast at trout we could only hope existed.  And that’s what makes this forecast, and this time of year, so enormous in possibilities.

This weekend Denny and Jordan, both experts on nymphing the Au Sable, ran two nymph classes and folks cleaned up.  We had two trifectas.  Numerous trout landed.  And several students called me after the classes to inform me that they’d used the new techniques they’d learned to have great days on the river.  On Saturday, Alex’s streamer class participants moved only a few trout, but one was so large it left Terry M shaking his head as he received text messages that his new granddaughter had just been born.  Not a bad spring evening for him. 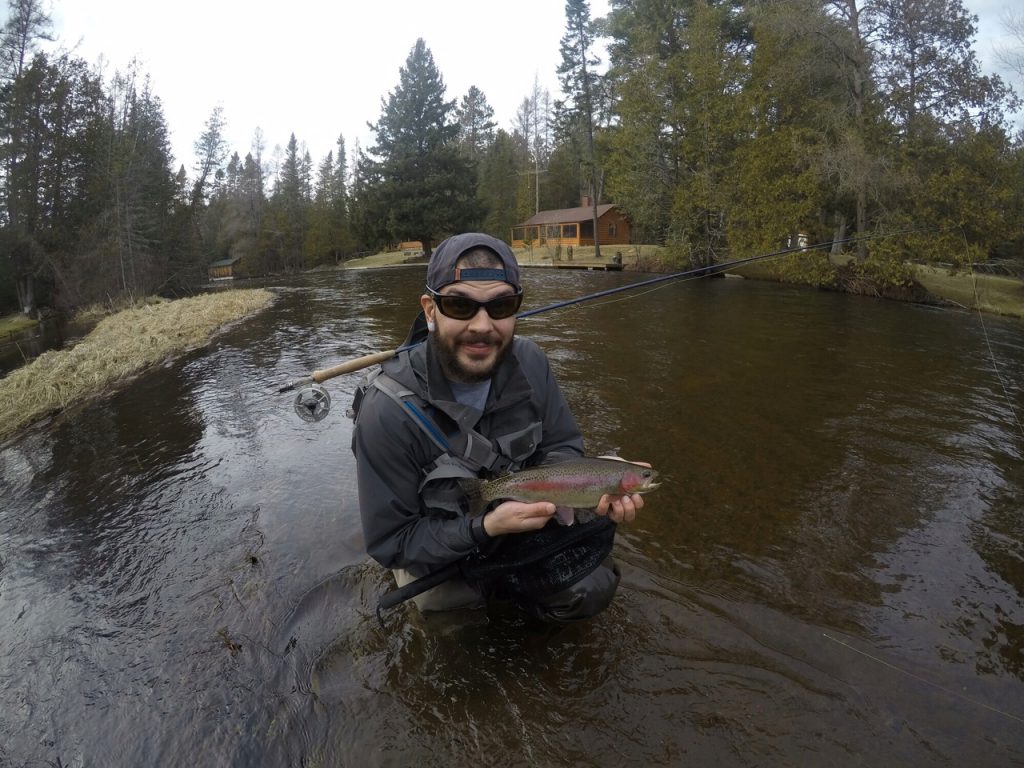 After teaching a bunch of nymphing, Denny went nymphing!

On Monday, Aaron and his crew found three huge trout up eating stoneflies.  He even had the foresight to have brought the dry fly gear – major kudos – and somehow shook off the streamer habit long enough to put a hook into one of them.   I can’t stop picturing those big snouts rising up near the end of an early April float.  I feel I would have botched it for sure.

Yesterday, Matt’s client saw a rise, which was actually a trout leaping from the water to avoid this much larger trout that was hunting it.   Not sure if that’s certainty or uncertainty, but of course when a twenty-inch trout slams your streamer, the hindsight seems dead on. 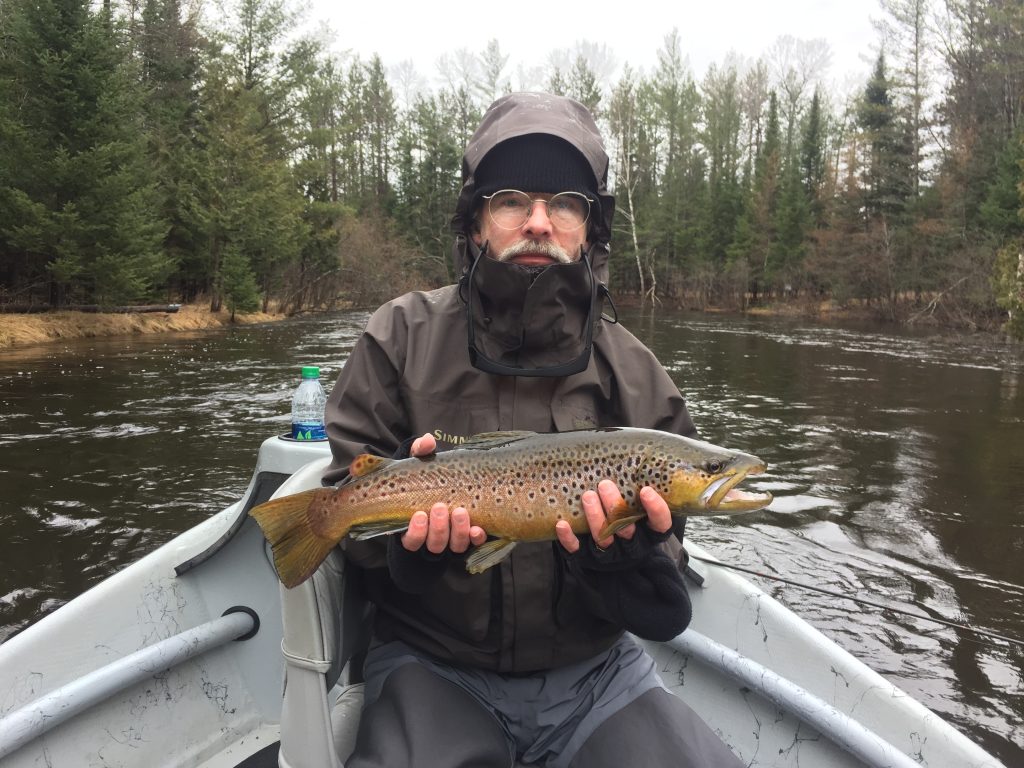 Nethers saw blue wing olives and a trout rise in some excellent dry fly water that I’ll visit as soon as it quits snowing and blowing 40 mph.  His clients are new to fly fishing, but so game to get out there.  From a day of skunk, to hooking two fish, to…

This weekend is supposed to be beautiful, with Sunday peaking at something like seventy degrees.  I imagine that there’ll be strong hatches of both stoneflies and #18 blue wing olives and if the water – though high – stays clear a few fish will eat them.  Wading may be difficult but the North Branch, Mainstream and Upper Manistee should be accessible.  The water temperatures and conditions will be perfect for nymph fishing and the fish will chase streamers too in the high warm water.

This heat will rush us toward the hendricksons, which aren’t far away.  Before any of us our ready, the prospects of things we’ll take for granted in June — rising trout, bug hatches, and floating lines – will become expected, and perhaps for many of us spoiled by the fruits of high season, not enough.  Well, it is enough, we say now in early April as the first snowflakes start to fall.  Sounds like plenty to me. 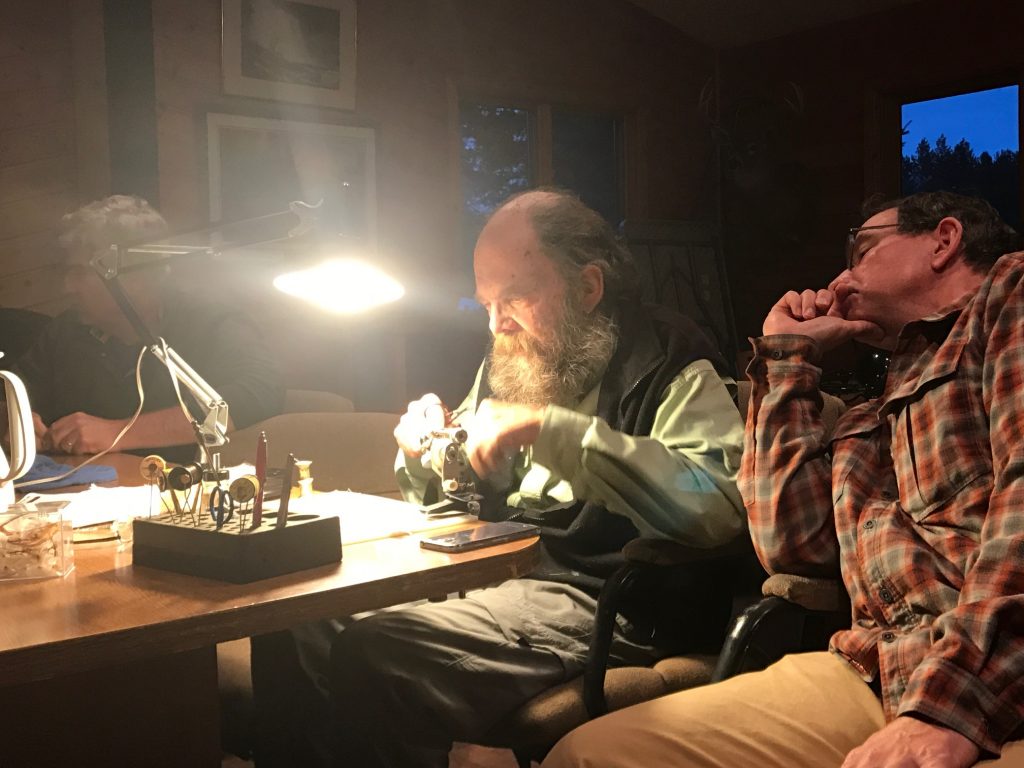 We’ll be serving food again this weekend.  Stop in and eat.

Off the road and guests welcome.

We still have a few rooms open for what is going to be a beautiful weekend.  Come on up!

Get your Anglers of the Au Sable 30th Anniversary Banquet Tickets!

Wait not a second longer to get your 30th Anniversary Banquet Tickets!  What you need to know:

HUGE fundraiser for Anglers of the Au Sable

Held at the Otsego Club in Gaylord

Tickets WILL sell out so it’s time to make plans.

Spring Fly Tying with Alex Lafkas: A great morning class that teaches you how to tie the flies you’ll use for the rise later that afternoon.