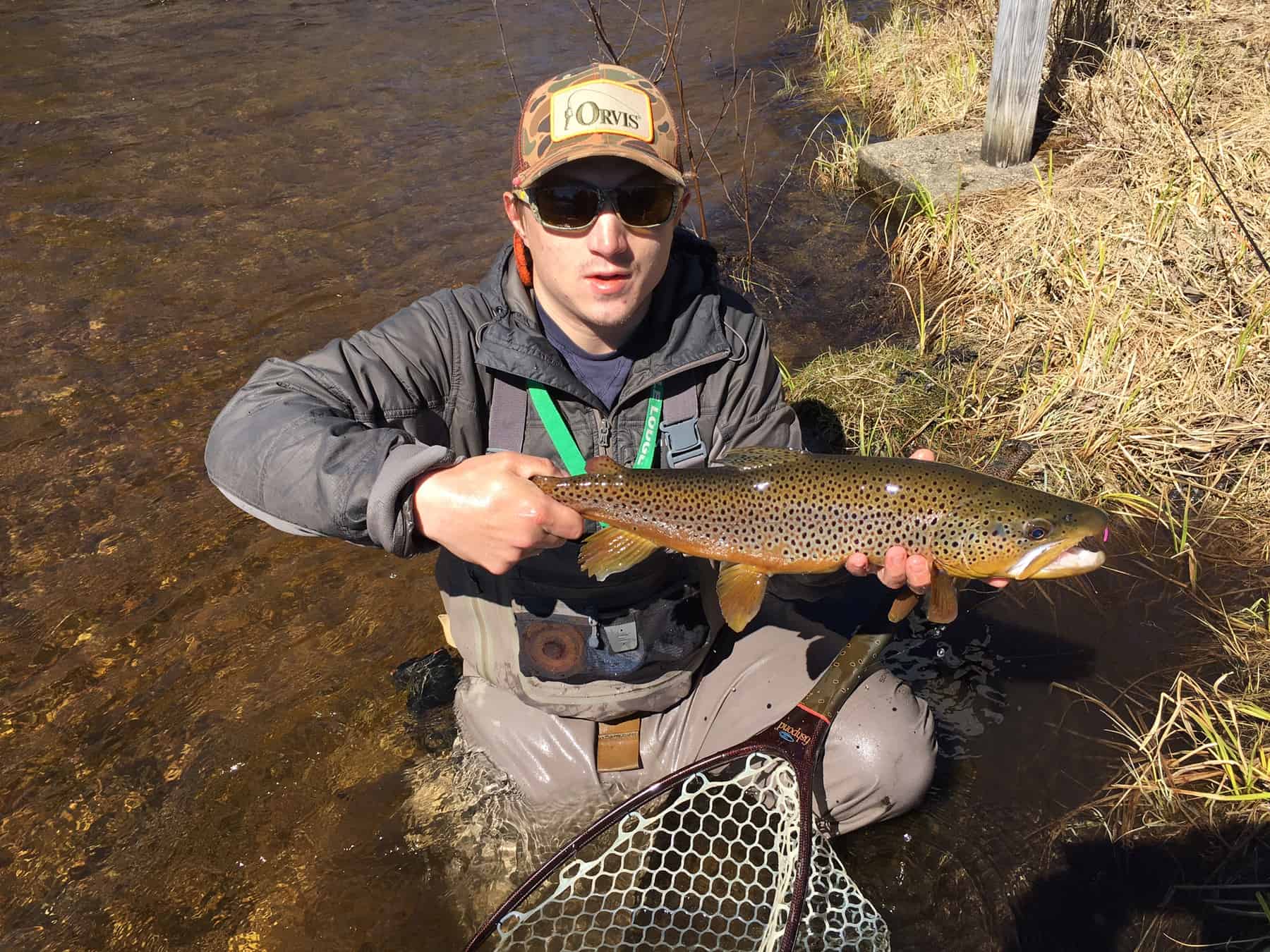 Sign up for your Anglers of the Au Sable 30th Anniversary Banquet Tickets Here, or stop in the shop the next two weekends and buy them at the counter.  The event is Opening Day Saturday, April 29.  Help us raise money to fight the fish farm permit.

Reports of olives, stones, even a few hendricksons, and fish rising, mix, in true April fashion, with fishless afternoons, sunken boats, broken rods, and cold hands.  But truly the 2017 fishing season is upon us.  From now until the end of October, the possibility of rising trout will become a probability.  The river system is saturated, but the true run-off (that involving melting snow pack, thawing ground, and ice) is behind us.  The in-between season went fast.  By next week at this time I expect to be writing this with the memory of a Hendrickson afternoon fresh in the fingers.

I’ve got lots to do.  And not because I work in a fly shop, but because I have to get all my dry fly gear rounded up, organized, and ready for action.  The last few springs have been teases.  But the spring of ’17 is already here.   Need both kinds of floatant.  Need leaders.  Need to reorganize the hendricksons and olives.  Need to check the fly line and then decide to replace it just in case the tip sinks, because with a sinking floating line comes a specific depression, most similar to the loss one feels when accidentally breaking the yolk on a breakfast egg.

Truly, after months of laboriously chucking stuff meant to sink, it’s time to get everything floating, and floating well, and drag-free.  The first few dry fly casts of the season are ugly, and usually I’m too numb from winter streamer fishing to realize just how bad my drift is.  That seems right, I think to myself.  I might even share with friends later in the evening, man, they sure were picky.  Yeah right.

The current conditions are pretty simple.  The South Branch is very high: 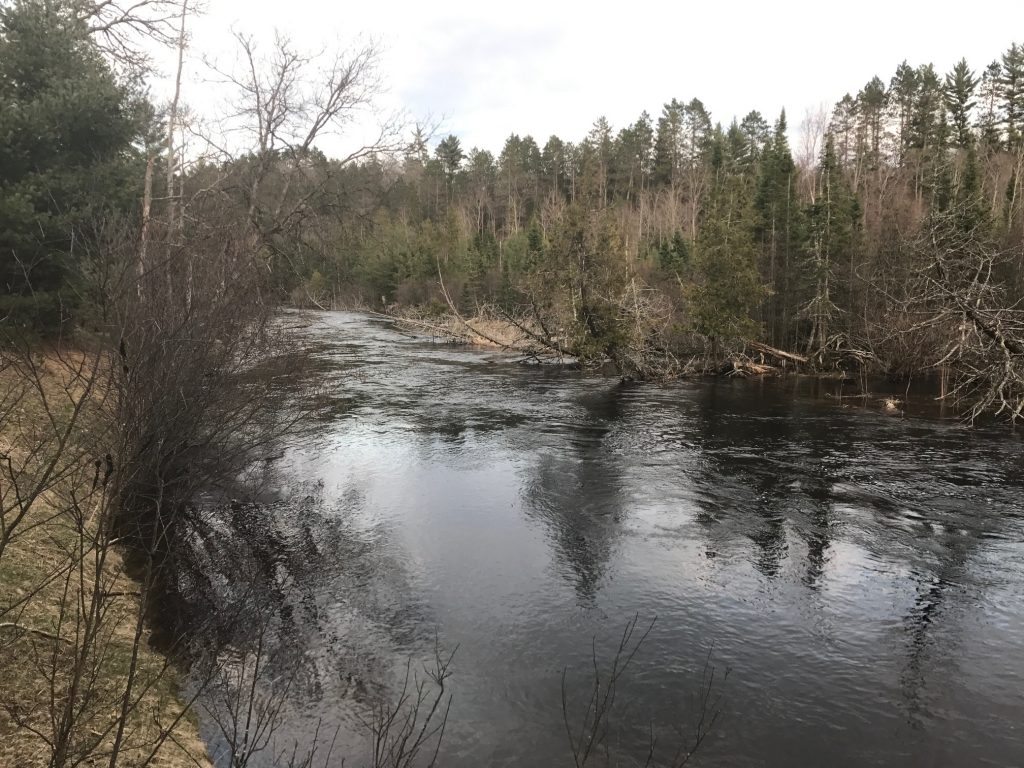 The mainstream below the South Branch is very high.

The river was blocked at Parmalee Bridge, but the Department of Transportation removed the offending tree (those familiar with Parmalee Bridge will understand the necessity of this removal, the size of the tree, and the bravery shown by DOT in the removal…I would have liked to have seen it).

The North Branch is in good shape down to Big Creek.

The Holy Waters and the upper Manistee, like all the rivers, are stained but dropping and clearing.

For bugs, anglers will see stoneflies and olives and the first localized smatterings of hendricksons this Easter weekend.  Dry and dropper, indicator and tight line nymph rigs, and streamers will all be important.  This is bring-a-lot-of-boxes fishing.  You not only are faced with the possibility that you might have to match a hatch.  You might also have to fish deep, shallow, on the strip or dead-drift.  This means all sorts of weights, extra spools, and so on.  I love to make long wades this time of year, or hop in a boat, and spend a long time on the water just trying to figure things out, adjusting to changes, and moving slowly.  The trout will be on the feed as water temps approach fifty degrees – as the water temps will for much of the next week – and you’ll find the trout not sitting in dead water, but in the riffles, shelves, and along the edges of the faster bubble lines.  Barring substantial rain Saturday, this should end up being a low water spring.  But one never knows in April.

It feels good to write about fishing.  And it’s easy now, because the fishing season is here.

It’s a family holiday weekend.  But for those either up here, or coming up here, we have rooms, guides, and breakfast buffet and a limited dinner service.  Our new full menu will be offered beginning on April 21, but dinner “menus” are simple this time of year: 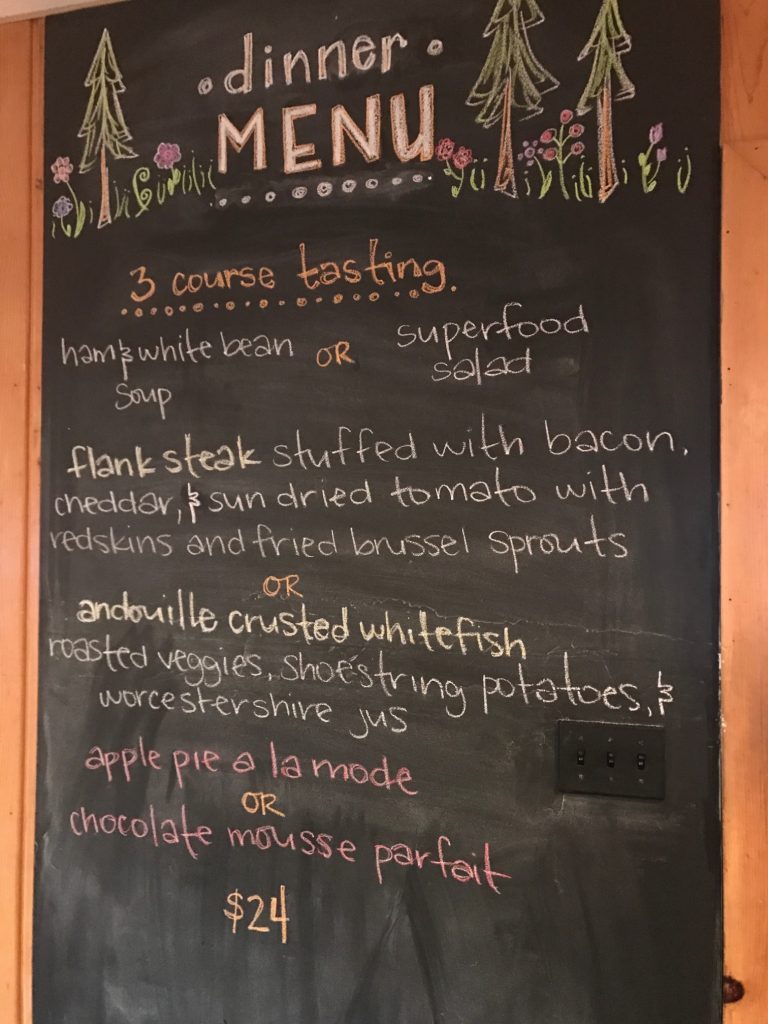 We have an excellent tying class with Alex Lafkas on April 22 at 8:30 am in the Board Room.  This class was awesome last year.  Spend the morning tying, and the afternoon fishing hendricksons…with flies you tied in the class.   Bring your vise and tools…and we’ll supply the rest.

Get your Anglers of the Au Sable 30th Anniversary Banquet Tickets!

Wait not a second longer to get your 30th Anniversary Banquet Tickets!  What you need to know:

HUGE fundraiser for Anglers of the Au Sable

Held at the Otsego Club in Gaylord

Tickets WILL sell out so it’s time to make plans.