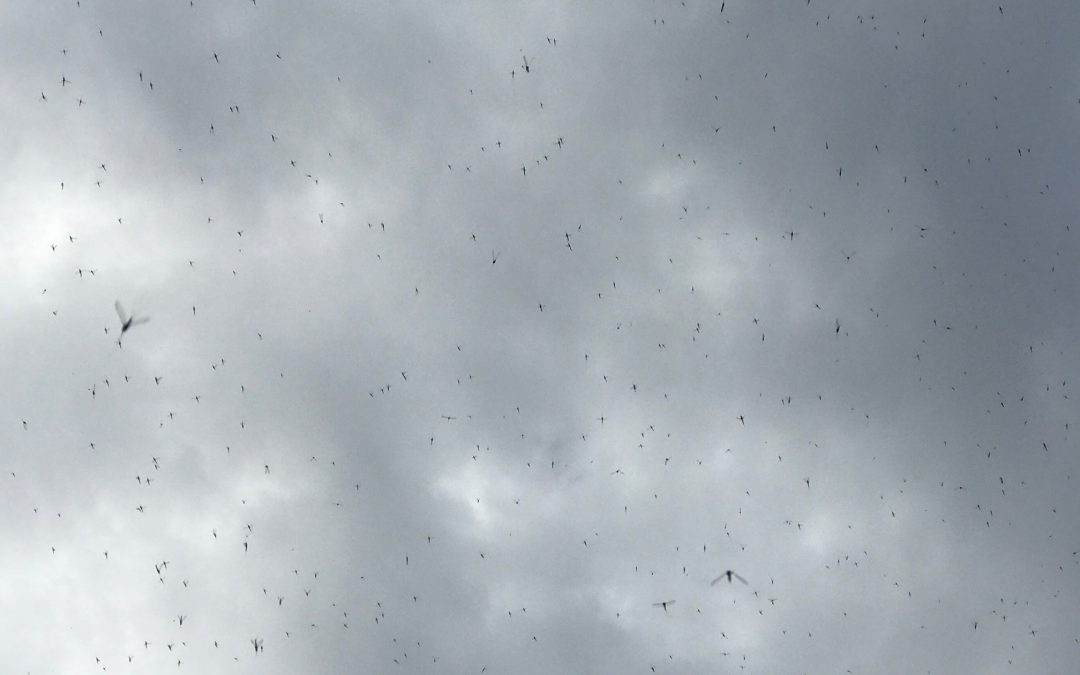 While launching a boat to cut out a river-blockage, I watched a gentleman I know from the shop work a big selective trout from just off the boat launch.  He was throwing gentle reach casts…the sort of casts lifelong Au Sable anglers make almost habitually.  The trout was rising across the river next to a little grass clump.  The bugs were there: sulphurs and popcorn caddis, mahoganies and hendrickson spinners.  It was 1:30 pm.   He tried the Borchers — because that’s just what you try on the Au Sable in May — to no avail.

“I think he’s taking the caddis,” he called over his shoulder.

He switched to the caddis, through yet another nice slack line cast, whooped, and a great brown came flying out of the river twice.  It was absolutely beautiful.

And that is how the last two days have been. 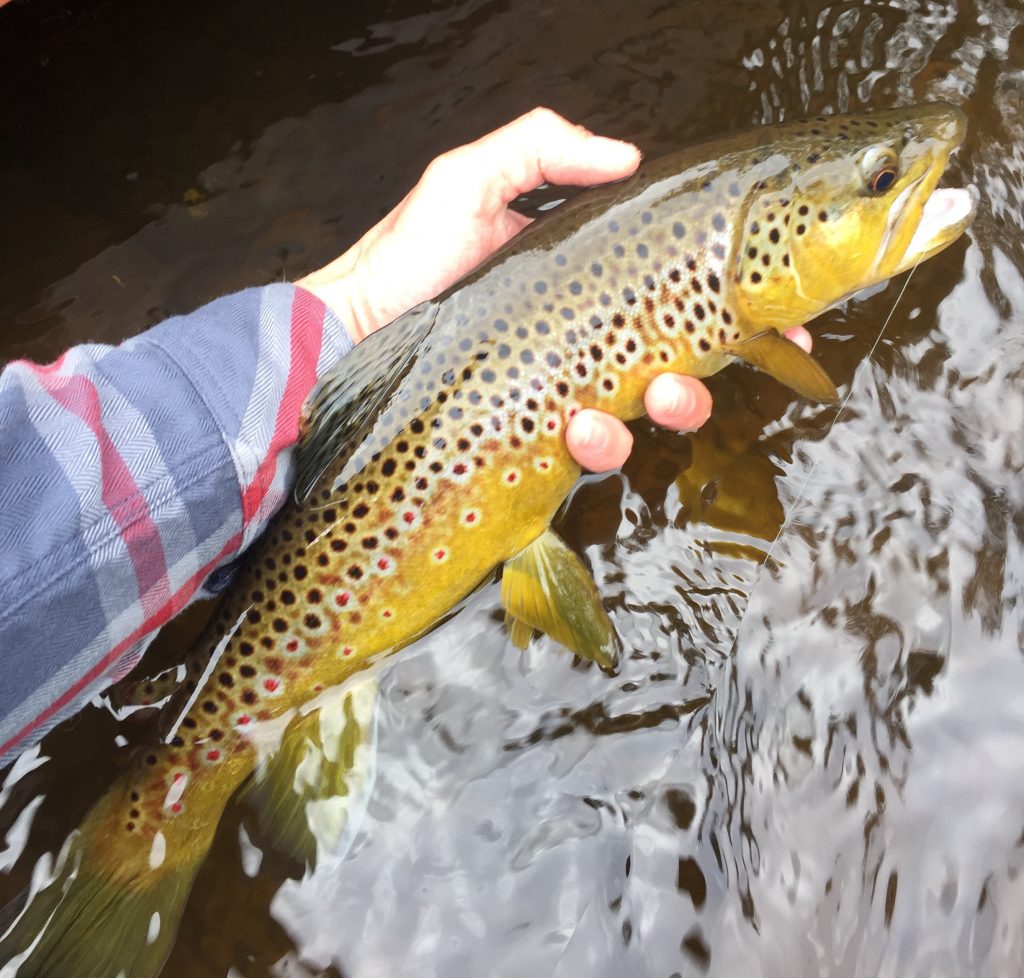 Yesterday was the kind of all-afternoon cornucopia of bugs that made this river famous.  It was one of the finest days I’ve had on the river in my life.  The primary bug was the hendrickson spinner, but the sulphurs (aka size 16 light hendricksons), the popcorn caddis, the mahoganies, the Siphloplectons, a few yellow stones, and a few more mattress thrasher stones rounded out the buffet.  I caught the heaviest brook trout I’ve ever caught on this river.  I had a brown trout tear drag upstream.  Grouse drummed from the woods.  Young goslings moved through the weeds behind me.  And everywhere I looked there were trout rising.  The only order of business was to text Katy the same five words she’s heard hundreds of times over the last seventeen years: I’m going to be late. 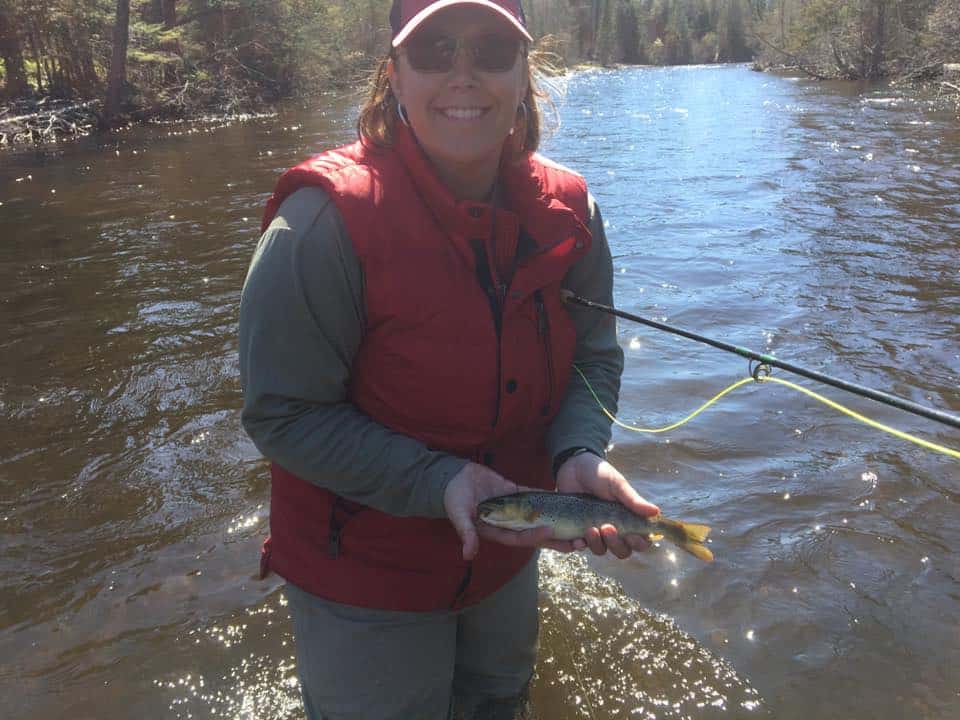 Wendy with a nice daytime brown.  Such trout are everywhere this year.

All three branches have been or are quickly becoming wadeable.  The yellow bugs are arriving just a few days ahead of “schedule” (whatever that means): yellow stones and sulphurs for now, the smaller sulphurs and March Browns later.  The popcorn caddis and black caddis are hatching very well.  The mysterious “brown bug” — also known as a Borcher’s Drake, size 14 — will mix with the remaining hendrickson spinners and mahoganies to create heavy spinner falls on the right evenings.  If I sound like I’m writing really fast, and really excitedly, you’d be correct.  The weather forecast is perfect.  As it warms up next week, expect bugs in the morning and evenings, and use the larger stoneflies and attractor patterns (gotta love that purple patriot) during the day.

It’s time to wrap this up and head to the river.  It’s just about 8 pm, the air temperature is 63 degrees, and there is a soft blanket of clouds over the river valley.  I like writing fishing reports, but not as much as I like researching them.

Bring in your used gear…Get new gear: This Saturday, May 13 we’ll be set up outside to buy, sell, trade and appraise your used gear.  We start at 9 am and will go until about 1 pm.  We are most interested in good graphite rods, American or English made reels, and collectible bamboo.  An example from yesterday: we recently took in a Winston BIIMX and a Ross CLA and applied it toward a new Orvis H2 and a sweet custom blue/black Hatch reel.  No need to wait for us to sell it on Ebay: we take the trade up front.  So empty out your dusty old gear and get some shiny new stuff!