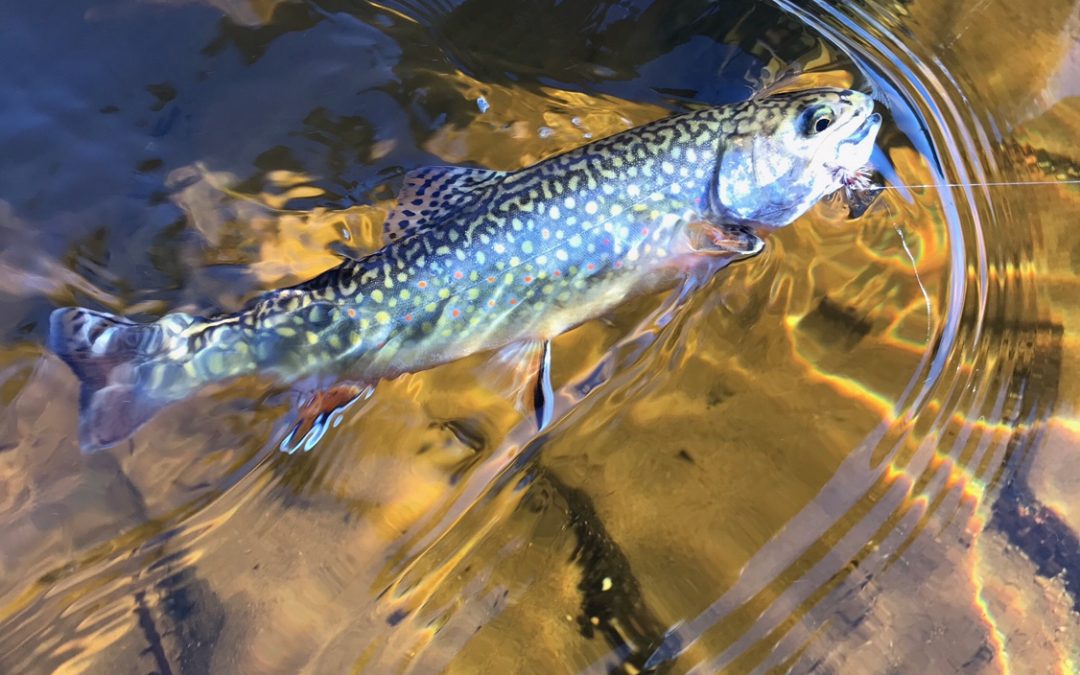 Need help with your casting?  Well, we all do.  This Saturday, from 9 am – 10:30 am, Alex Lafkas will make you a better fly caster.  He’ll cover the basics for those that need help with the basics, and the hard stuff for those that need to work on the hard stuff.  The best part of this class is that you’ll be able to take your shiny new double haul to the river and go fishing…  Email or call to sign up.

Rio Lines Test Cast…Trying to figure out what line will work on your fly rod?  How do you test cast a fly line?  This Saturday, from 9 am – 1 pm, you can test cast the Rio lines.  Maybe your rod will like the Grand, the Gold, the Perception, the Light Line.  We’ll have them all.  Rio representative Ben Hunting, himself an expert caster, will be on site to help.  As an added incentive, bring in your old line, and receive $20 credit toward a new Rio line.

Another May week, another new batch of hatches, another small book of stories, another fine set of evenings on the Au Sable.  Mid-May starts cigar time on the Au Sable, whether you smoke cigars or not.  The Au Sable tradition is to eat an early dinner, head to the river, find a sitting log, light up a cigar, and wait for the hatch or spinnerfall.  Not everyone smokes cigars, of course, but the basics are the same.  Attention spans have diminished in the last dozen years.  Phones buzz and jingle.  The internet is available almost anywhere, even on the river.  But river speed – specifically trout speed — is different.  “Cigar time” is less about contemplation and more about finding the pace of the river.  At first glance, a very alive river can look pretty dead.  How many times have you thought that nothing was happening on the river only to realize, after a minute of stillness, that the sulphurs are dribbling off, the stoneflies are bombing the riffles, and there’re a half-dozen trout feeding in slow rhythm on the far bank.  Do such things suddenly start to happen, or were they already happening and only after observation did they become apparent? 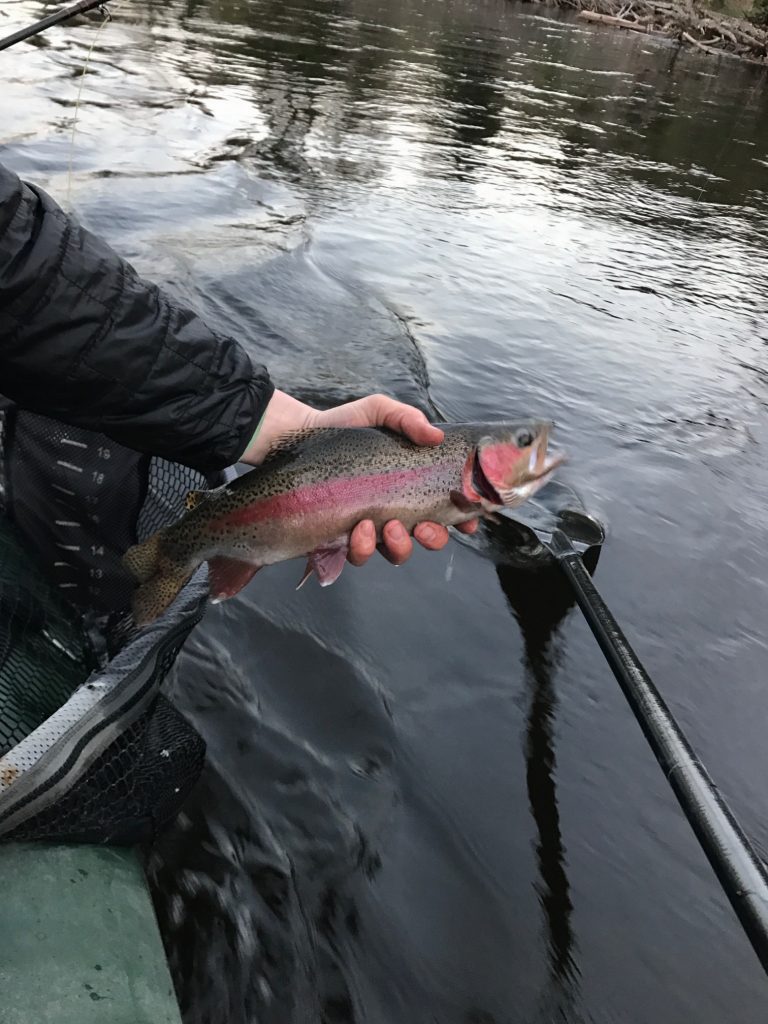 2017 has been the year of the wild rainbow 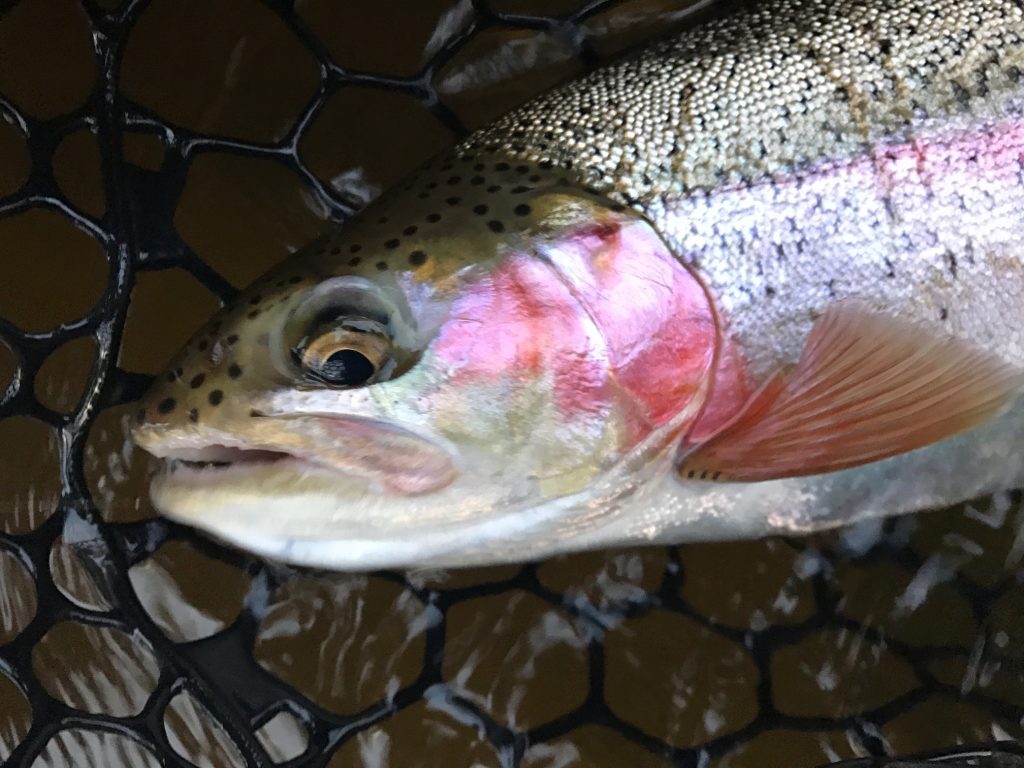 This week (or weeks) is brown bug season.  What is a brown bug?  Entomological backlash?  Probably.  Brown bugs refer to the hodgepodge of bugs that seem to drop from the sky on the right nights: Borcher’s Drakes, Siphloplectons, leftover hendricksons, mahoganies…  Of course, it’s also yellow bug season: #16 sulphurs, yellow stones (which were very important tonight), popcorn caddis.  With the heat of the last few days, there have been strong hatches and spinnerfalls of everything, but also some dead summery times where the best bet has been to whip a mattress thrasher back in the backwaters and along the logs and twitch it around.  The return to cooler temperatures will be welcome.  These are drake temperatures…but it’s not drake season yet.  That’s a different sort of game…

A look at the forecast over the next week shows a wide variety of temperatures and forecasts.  80s today.  70s tomorrow.   A high of 60 on Friday and Saturday…and this cool down will condense the hatches around the late afternoon and early evening.  The sulphurs will emerge in these conditions throughout both the Manistee and the Au Sable.  The warm up early next week will have these same bugs returning to the water to spin Monday and Tuesday (if the forecast remains somewhat fixed…which it won’t).

It has been a pretty great week, with a variety of reports.  Jordan had his best day of the season yesterday.  Others struggled to find rising trout in the heat.  Some hit spinners and some missed the spinners.  Lots of bugs and no fish.  A few bugs and lots of fish.  I floated a few times this past week and had great opportunities and, well, they were great opportunities.  Some folks think that guides/fly shop people catch every trout that rises.  Ha ha ha…  But I was able to net some great fish for friends.  The best was an enormously fat rainbow that my friend Kyle hooked in a backeddy.  The first run had the line hissing through the water like a recently lit candle.  There were two trout in the backwater and so we didn’t take a pic.  Wish we had…the second trout didn’t get caught. 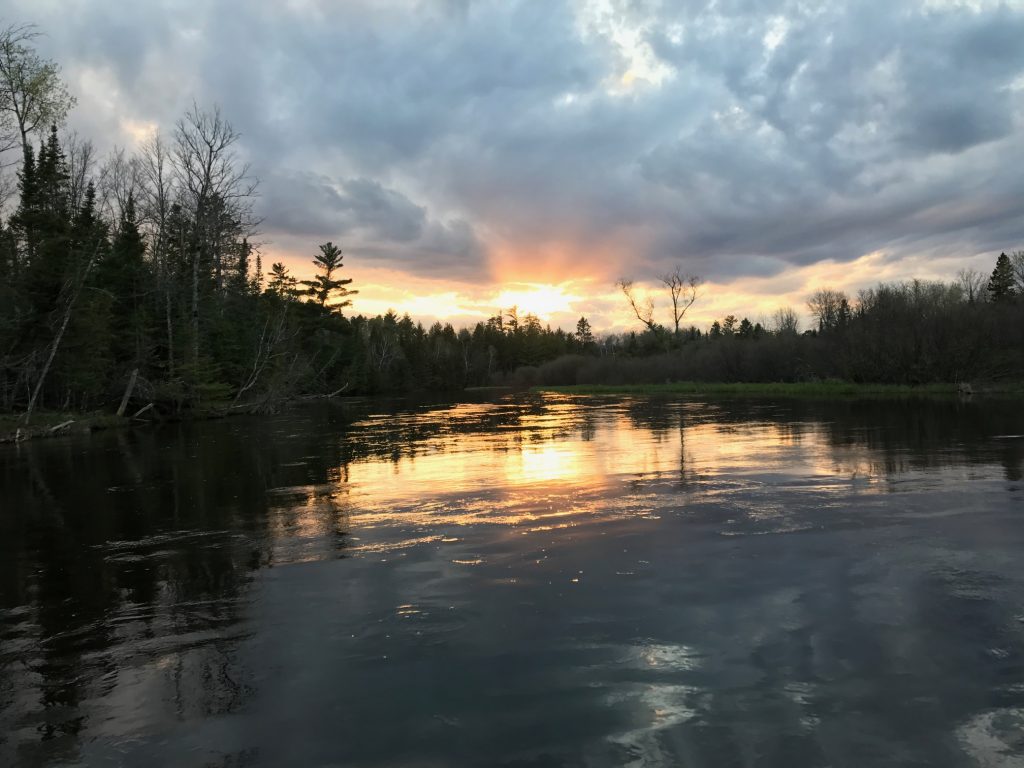 All the rivers are in excellent wading shape and right where they should be this time of year.  There are enough different kinds of fishing to scratch just about every fly-fishing itch an angler may have.  Early morning streamer anglers did well today.  Nymphers are finding trout.  If you like swinging soft hackles, one of the best times to do it is during the afternoon caddis hatches this time of year.  Mio has been fishing well this spring if you crave big water.  And the creeks are now awake if you crave small water.

Tonight will be a sit on the bank sort of night.  It’s 80 degrees right now, but will fall into the low 70s by dusk.  No cigars for me, but quiet conversation with a friend, and careful study of a bubble line that owes me nothing when it comes to memories.