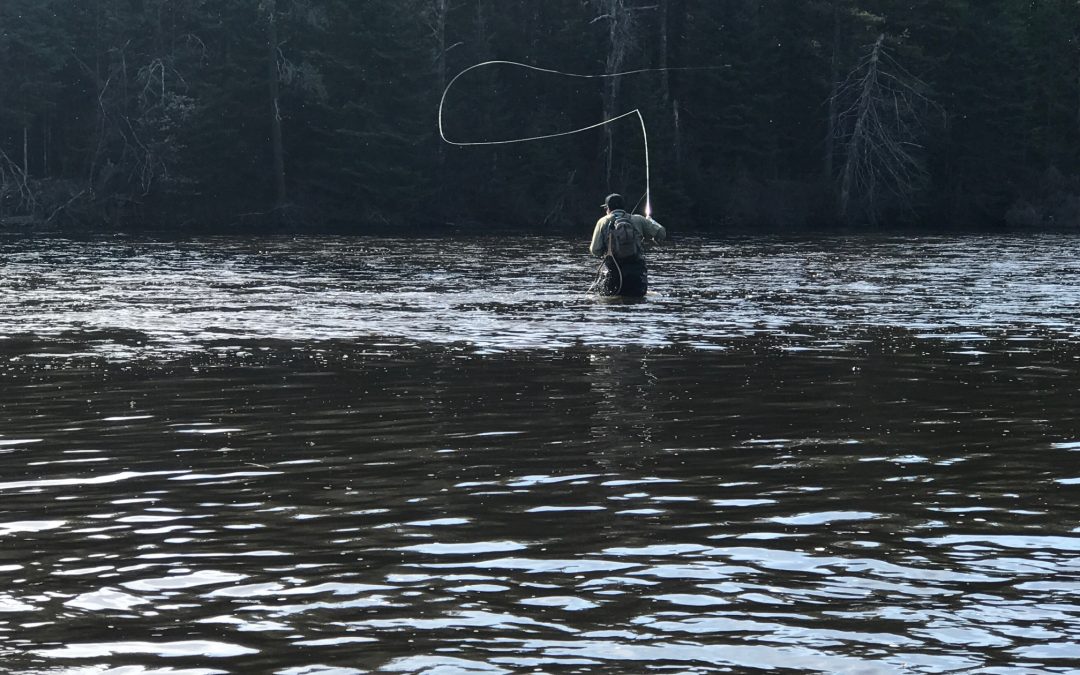 Today was pick-your-superlative.  It was unbelievable.  It was everything a May day can be on the Au Sable.  The olives started at 11 am, and began a progression of hatches and spinnerfalls, each seemingly better than the last.  I cast at the first trout at noon from the dock at the lodge, and at the last trout at 9 pm.  Between then, chef Haley and I saw rising fish or caught trout on the North Branch, below Mio, and the lower mainstream.   It was a day to drive around, pop in, and see what was happening.  Everywhere we stopped, there were fish feeding.  It was that good. 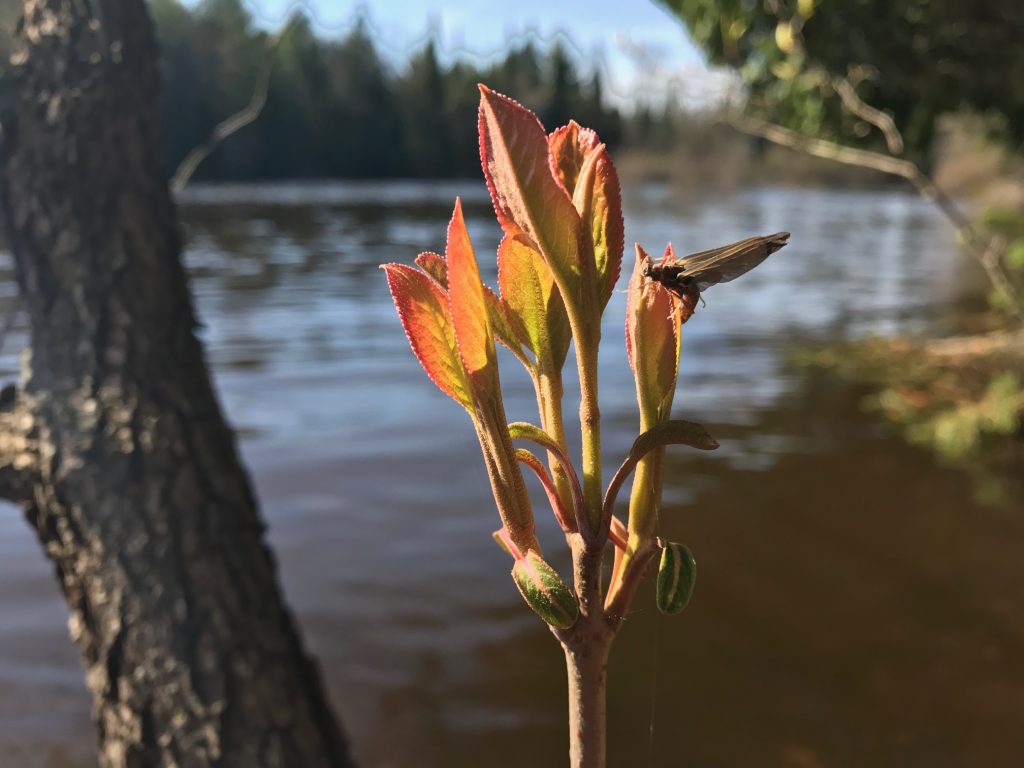 A hendrickson from today

We’re in that sweet spot in which multiple hatches are overlapping and the trout are numerous and willing to rise.  Right now the primary hatch is the Hendrickson, and with it are the #18 BWOs, the #16 mahoganies, and the black caddis.  There are a lot of spinners in the riverside bushes and trees, which makes blind fishing a spinner pattern in a 14 or 16 (or the purple patriot) a productive go-to fly.  The fish are rising throughout the system, nevermind the high water.  By this weekend, the Main and North branches will be wadeable, along with the Manistee, but the South Branch is still very high. 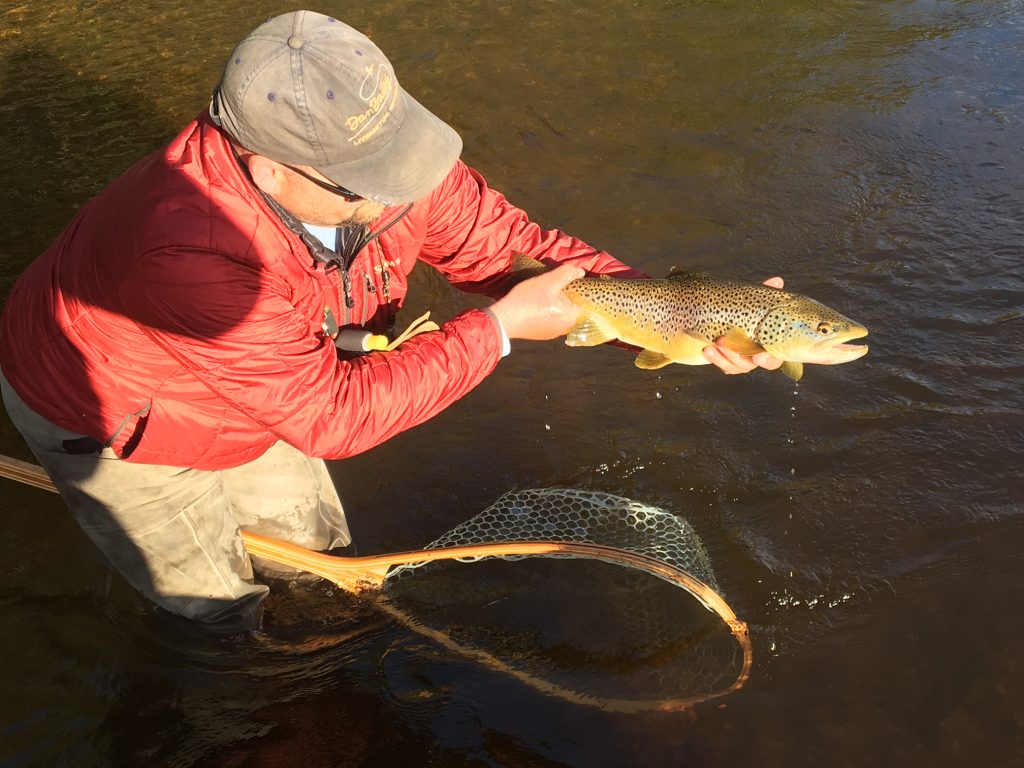 Nethers hosts a beauty caught by the boys from Indy

Opening Day has come and gone.  As always, there was hijinks.  Unlike always, there were hendricksons (and black caddis, and olives, and mahoganies).  There were fish caught.  Some anglers did incredibly.  The Olgren foursome, representing three different generations, landed a lot of trout on the dry fly on Saturday (as in, so many that I’m not going to post the number).  Others struggled due to timing, bloody maries, choice of water, and so on.  Someone in a truck tore out the gate to the Castle.  Some caught enormous trout.  Some were just here to party.  Some came for the Anglers banquet.  Most anglers – myself included – landed somewhere in the middle.

We have not had a real off day yet despite the huge weather front that came through.  Sunday was in the 30s and the bugs rolled below Mio dam and the trout rose and it was great, and deep, and I heard my drag scream and I straightened a hook and I got to hold some very fine trout and I overtopped my waders…all in about fifteen minutes.  On Monday, we had a fine little hatch on the Holy Waters and the North Branch, a mix of olives and mahoganies and hendricksons.  Yesterday was a streamer day.  Today was a dry fly day. 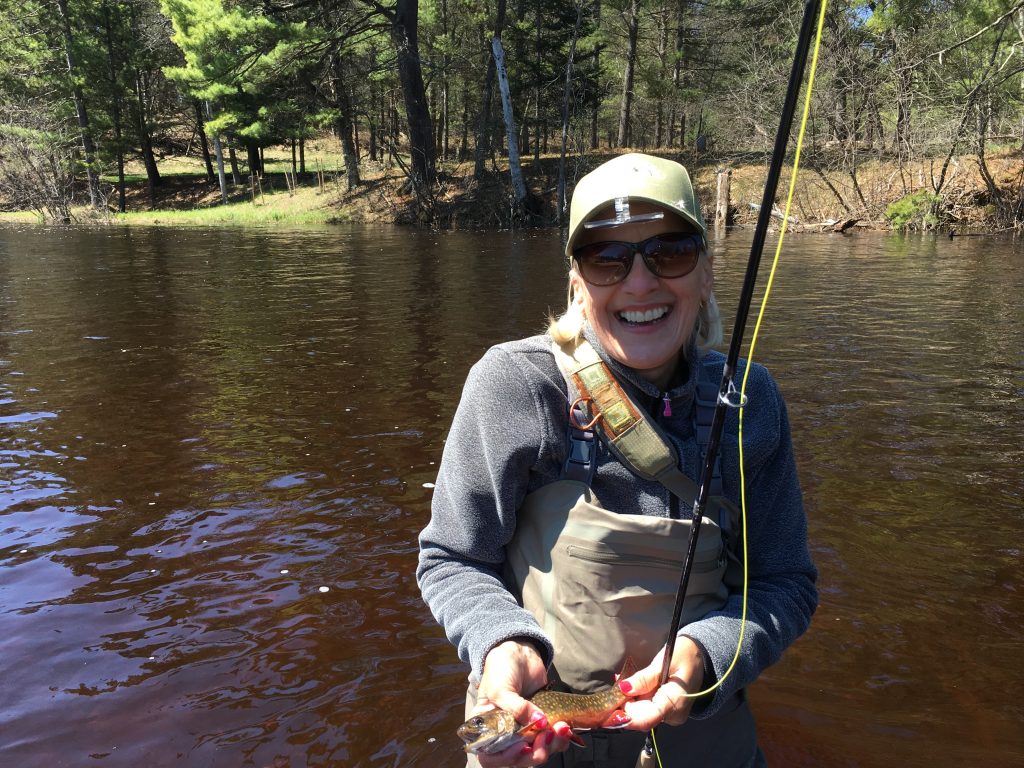 The fishing is good this year.  It’s so good that even the bad days are better than the best days a few years ago during this same week.  The trout are bigger, healthier, and to my personifying eye, happier.  That’s the beauty of an excellent fishery, warm winters, and habitat.   We are much further along in the season than a lot of people realize.  The air will fill with Hendrickson spinners now on every warm day.  The caddis will hatch when the sun is out.  The light hendricksons (aka “the big sulphur” or the “yellow wing sulphur”) will begin soon, along with the first of the stoneflies, the popcorn caddis, the Borchers Drake, and the rest of the May bugs.

We expected this year to be a good one.  But this year is shaping up to be a great one.  And what is going to be at its best will be the hatch matching on this river over the next three or four months (and in particular, right through the complex hatches of May and June). 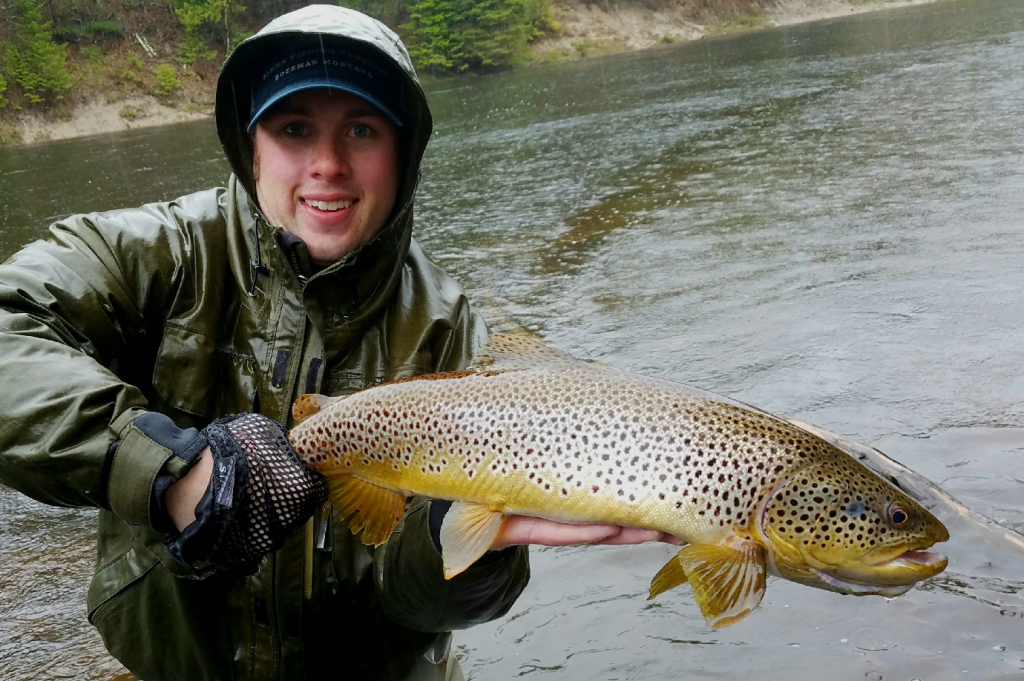 On Monday, after the morning rain, I left work and stopped at the river on my way home.  The olives were hatching and the fish were rising.  It was a windless, foggy, warm day.  The river was stained and fast in the middle and the trout were on the dead water edges and they were rising quietly.  I tried the Hendrickson first, but these trout weren’t pushovers.  They wanted the olive, and they wanted it on 6x.  Even after the hendricksons started, the trout stayed on the olives.  The best fish was rising in a little backwater beneath a cedar.  It was a fun fish that required timing and thought.  When we began, the fish was clearly eating olives.  But then the sun came out and the hendricksons started.  But the trout wasn’t eating hendricksons.  Or olives.  Or mahoganies.  I saw a few spinners, and tried those.  The trout kept rising: a gentle, slow, head-tail rise.  The light was such that I could see the duns on the water…and could see the trout was not eating those.  So I switched to a nondescript emerger and that didn’t do it either.  The sun peaked back out and I saw a single lone caddis flutter by.  I lashed on a caddis and the fish ate on the first cast.

It was not a monster.  But it was a great fish, in that way that such fish can be great.  I was happy to hold the trout, but happier still to have had to figure out what the fish was eating and to match it. Solving such puzzles is what attracted me to the Au Sable in the first place.

Buddhist monks have a perfect, more meticulous demonstration of the same pleasure one takes in matching the hatch: the sand mandala.  A mandala is composed of different colored sands, arranged in very clean pattern.  It is destroyed upon completion, the idea being that the making of something really cool is even cooler than what is made.  Marinaro said everything after the hookset is anticlimax.  In some fishing, no.  But in matching the hatch, yes.  It was that final fish under the cedar, the one that was eating the caddis and ignoring the many different sizes and shades of upright wings, that convinced me that Marinaro, himself somewhat monkish in his own spring creek way, had it right.

Good eats this weekend, starting on Friday, May 5.  Available to go!