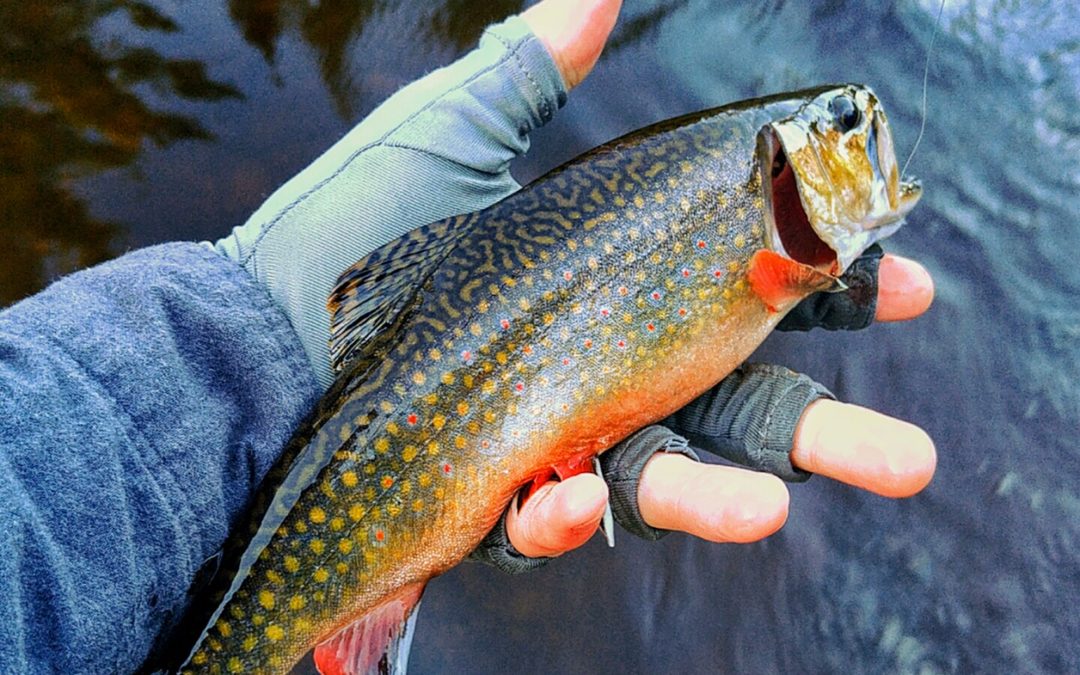 The persistent heat finally caught up with the Au Sable River.  After a late start, the brown drakes have more or less moved through the system and are isolated in the upper Holy Water and the Manistee.  The Isonychia have been hatching right at dusk for too short a time.  Last night, we had four hours of worth of Isonychia that hatched in a frenetic twenty minutes – barely enough time to set up on some good fish.  Just before the hatch, we passed a local swami in his little square rowboat.

“Been jack squat for drakes the last two nights.  This is the third night,” he said.  He toked on his corncob pipe.  “Usually after three nights like that, the big bugs show up.”

A few hours later, a few hex spinners swarmed the headlights of the truck as we pulled out.  Swami says…

We had limited reports of scattered bugs throughout the river system this morning and a few trout caught on hex.  It’s not going yet.  But it will be, and soon.  Soon enough, in fact, to make me reconsider what I intend to do tonight.  Arriving with the largest of the mayflies are some of the smallest, the tiny caddis and the little olives that foreshadow the changing of the season.  Last night the fireflies flashed above the beds of blooming irises, and one sensed that spring was the thing that ended a few weeks ago. 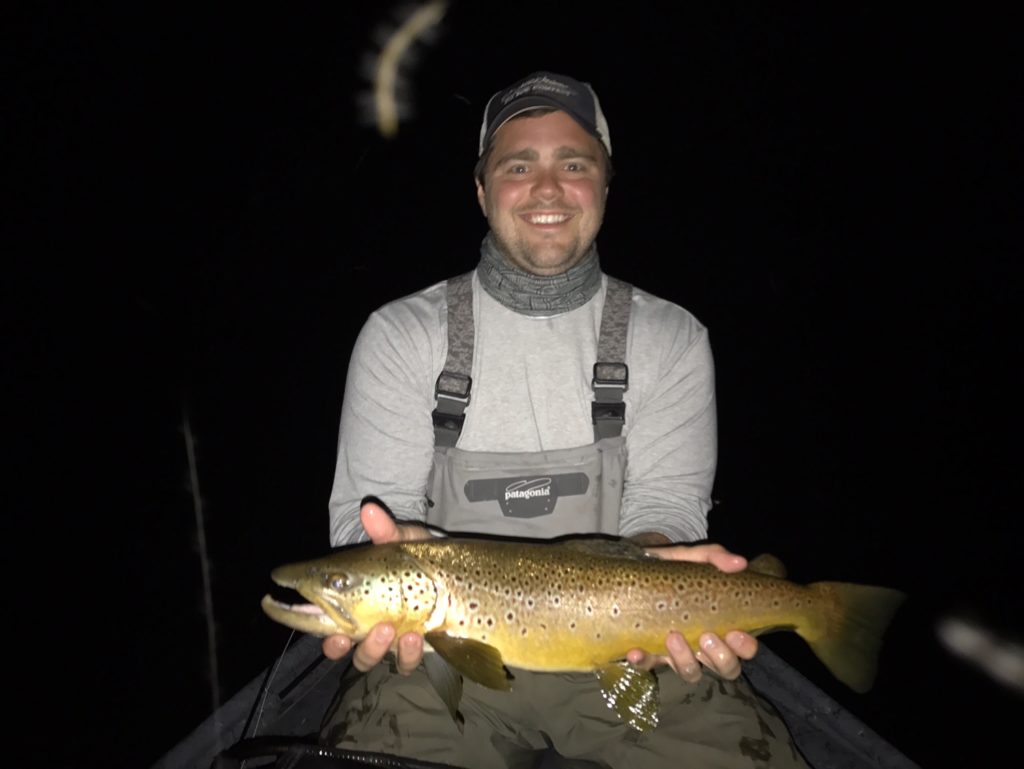 The heat will continue through the weekend, with heat-induced thunderstorms forecasted most days (though we’ve been lucky in dodging these so far).  At some point, and I think before the weekend is done, the hex hatch will begin to occur in full force on the South Branch and in the slower water sections of the lower Au Sable.  By next week and week-end the hatch should be widespread.   The Isonychia will continue to be the best searching patterns, as well as the second best hatch of the month.  A variety of emerging patterns as well as the spinner – most commonly and successfully imitated by Rusty’s White Knot aka The White Topper aka The Ruby Relaxer – are a good pattern all day long.  Big trout eat Isonychias.  Sometimes a big trout will start on the Isos and switch the hex almost seamlessly.

Mixing in with these two big bugs are a variety of stoneflies in sizes both large and small.  Occasionally the stoneflies can turn into a full-blown hatch, but most often they are a great starter for the angler searching with a dry fly.  The sulphurs are hanging on, as sulphurs do, and on the Holy Water they – and the last of the drakes – will provide some solitude for savvy anglers unconcerned with the big bugs.  This time of year, I like to prospect with a variety of skunks and skunk-like flies of both deer hair and foam but always featuring rubber legs.  Trout get used to eating big meals.  So give them one!  Skunks.  Tarantulas.  Chernobyl Ants.  Chubby Chernobyls.  And more.

Late last week I escaped for a solo float to catch the brown drakes.  It was awesome fishing.   So awesome that I’m glad the river doesn’t always fish like that.  The trout were voracious for what would end up being the last good brown drake spinnerfall in that stretch of water.  The spinners were falling for over an hour and they were on the water for much longer.  Surprisingly I had the river to myself, and I skipped from riser to riser, catching some and messing up others.  While trying to track down a very large trout rising in a dark, deep corner, covered in clay and my waders filled with water I realized I had no idea what time it was.  It was glorious.

The same thing happened this past Sunday when I was out bass fishing with my boys.  The bass were post-spawn and hungry.  They were everywhere.  It was about as good of bass fishing as you can have.  My foul-mouthed four-year-old son entertained the nearby pontoon boaters by yelling, convincingly, ah shit! every time a leaping bass was lost.  We fished right through dusk.  We fished right through the mosquitoes.  At just after 10 pm Katy called to enquire if I realized if it was a school night, that the kids were already an hour late for bed and we were still fishing.  I hadn’t realized any of this, of course, because the bass were biting.

The hex hatch causes one to obsessively check one’s watch while waiting for bugs.  But once the bugs hit the water (usually around 10:15 or so), time sort of becomes inconsequential, often going unchecked until the keys twist in the ignition and the fish car clock glows with absurdly late numbers that seem somewhat profound.  1:02 am.  2:37 am.  It’s then I usually realize that I’m kinda tired and hungry and pretty darn happy too.

Have fun, stay safe, and be polite on the river.

Gates Lodge is Serving Alcohol!  We start serving alcohol in the restaurant and outdoor space on Friday, and we’ll have Bloody Marys on Saturday morning.   We don’t have a full blown bar, and we’ll start simple, but we’re excited to add this offering to our restaurant.  A cold beer goes a long way on a hot day, especially with some Hexy Mexy.

Fly Casting Cleanup with Alex Lafkas: This class filled up and overflowed in May.  In under two hours, you’ll become a much better caster.  From beginners to advanced casters, this class will instantly improve your casting.  Some folks need help generating line speed.  Some just need to tighten their loops.  Alex can help with all of it.  This is a class worth waking up for, and one that will pay dividends later that night when you’re trying to squeeze as a cast under a cedar at the tricky trout in the backwater.  $75, 9 am – 10:30 am.

Wakeley Lake Opens for the Season: On June 15, the best lake in Crawford County opens up for its short and awesome season.  Artificial lures only and catch-and-release only.  The warmwater tour is in full effect!  A great way to beat the heat is to fish for fish that like it… 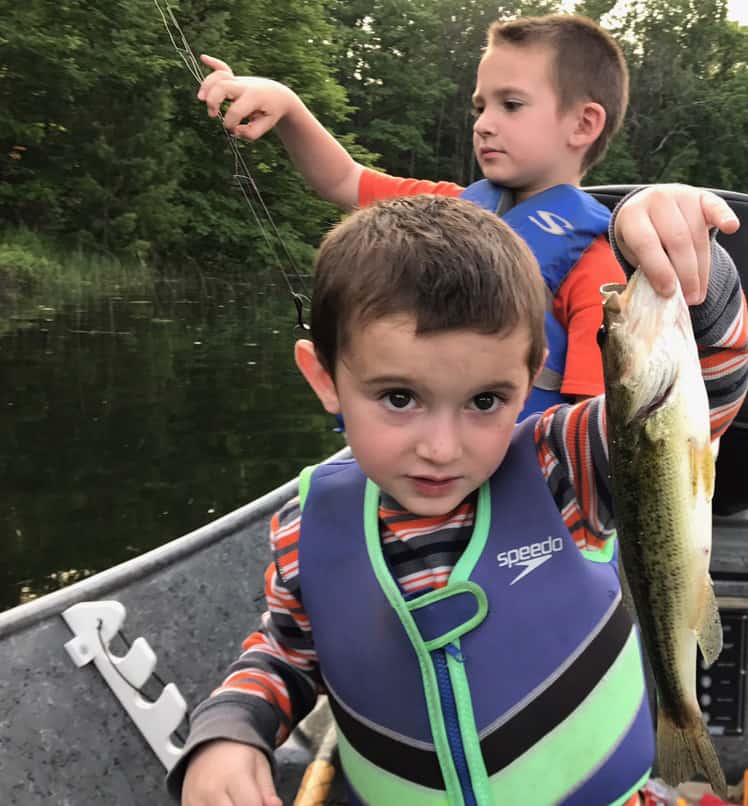