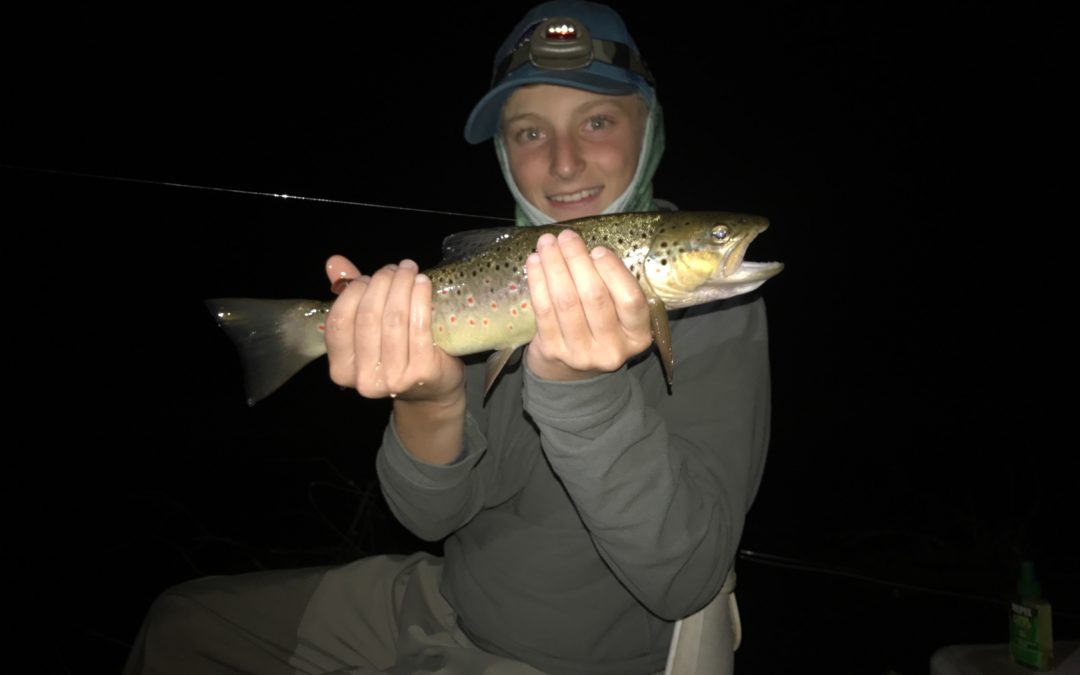 Every year I forget about the pleasant hell of choosing what to do on a day off in the summer. Here there are limitless choices.  Wakeley Lake at dawn with a popper, or tricos on the North Branch with a three-weight.  Stripping streamers for smallmouth out at Bear Lake, or chucking hoppers on the Mani or the PM.  Morning olives on the Holy Waters, or swinging mice on the South Branch.  Carp on the Lake Michigan flats, or, you know, cleaning the house.  Some choices are clearer than others.  Whatever it was, these last few days I planned on doing as much of it as possible. 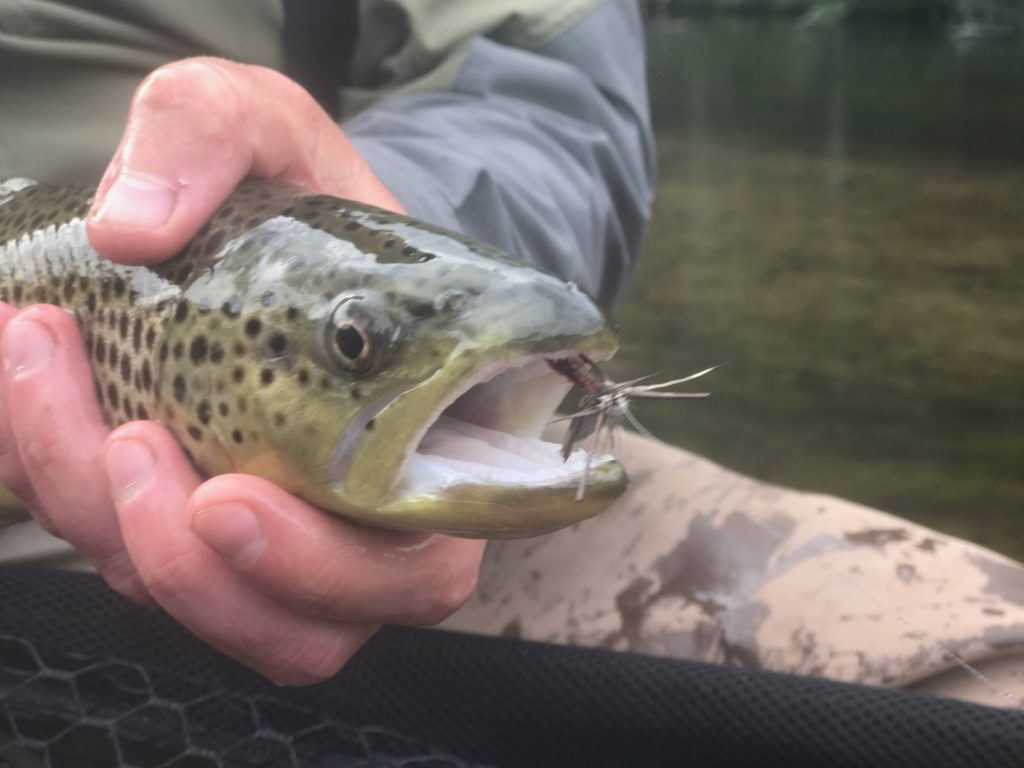 A mouthful of yarn skunk

So the other morning, when a friendly pirate walked in, silently grabbed one of our little white bags we use for the night flies, and drew a very good map to a secret channel between two islands off the Lake Michigan coast, circled the channel, and wrote: more carp than a Chinese fish farm…what choice did I have?

Many hours later, soaked in sweat, I was at the secret channel staring at an empty flat. A nearby angler in a boat stood heron-like on the bow for about an hour, fly rod in hand.  I stood on a rock, the small waves breaking over my ankles, doing the same.  No fish. Finally the boat angler climbed down from his perch, grabbed a spinning rod, and began chucking a spoon, probably for bass.  It seemed a sign, and so I left.

The next night a different pirate took me into a secret little turn in the river that was loaded with giant rainbows.  It was exactly as he described, except better.  The best of them swam over and ate my fly with about as much suspicion as a baby has at a breast.  I don’t think that fish or his parents or perhaps this trout’s entire lineage had seen more than a dozen flies.  It was a big fat secret fish that seemed especially innocent in the sunset.  It was one of the only places I’ve been that is probably still as good as it used to be.

That’s not to say that the usual pleasures are suddenly worthless.  After his float trip today, Jordan took advantage of the post-rain conditions and nymphed the bread hole and hooked a “steelhead sized rainbow.”  Tonight, still jet-lagged from recent adventure to the Pere Marquette, I meant to go to a nice little corner in the river.  But after suiting up, and stringing up for microscopic flies and 7x, and I waded into the river and saw, distantly, an angler working the pod of trout in the bend.

I ended up meeting some buddies in a different bend much further downriver to see if some late hex would fly.  Some did.  About six of them.  I left to write this report.  “Text me if they start hatching,” I said.  And of course, as I sat down to write, my phone beeped: They’re hatching!!!!  Of course they are…

Fly fishing seems to happen at the intersection of what the trout are doing, and where they might be doing it.  Conditions mean as much or more as location.  Take today for example.  A strong rainstorm disrupted the morning fishing.  One of our clients, on a trip with guide Joe Guild, shared this via email:

Joe and I stopped at his cabin to try to at least wait out the deluge. We discussed just quitting, and he adding a couple hours to a future float. However, as the rain let up to something a bit less, we decided to fish streamers for awhile….not expecting much being mid-July. Instead, we were rewarded with somewhere between 60 and 90 minutes on almost non-stop streamer action. No monsters (maybe up to 13″ or so), but had a few bigger fish attacks. Trifecta….brookies, browns, and a solitary rainbow. As soon as the rain let up, and the sky lightened, the streamer bite ended. Switched back to the skunk and caught a couple before Wakeley.

Our rivers are chock full of water and running cool and only slightly stained.  The morning size 18 olive is the main event right now.  Both latin-y and commonly referred to as the lata, it’s a strong morning hatch that returns to the water to lay eggs at dusk.  This is also the best time of the year to fish the deerfly.  Rusty’s SRB, as well as the Awesome, are key daytime bugs.  The Awesome is tied to float a beadhead nymph which, in sizes 16-20, is killer this time of year.

The tricos are in full swing on the North Branch and should show up on the mainstream in the next few days.  When the tricos and the latas are hatching at the same time, you can have two or three hours of complex, excruciatingly morning fishing.  Long leaders and fluorocarbon make a significant difference.  There is no time of year that more fish are rising than a good July morning.  For context: a 10” fish is a good one, and anything over 12” is a great trout.  When you hook one on 8x, you’ll probably agree.

The moon is rising later now, and this makes for a good window of night fishing opportunity any time after 10:30 pm.  Gurglers, mice, and for you fans of the classics, the Houghton Lake Special, are all worthy night time fare.  Swing the fly slow and wade slower.  Try to keep it swimming broadside to the current. 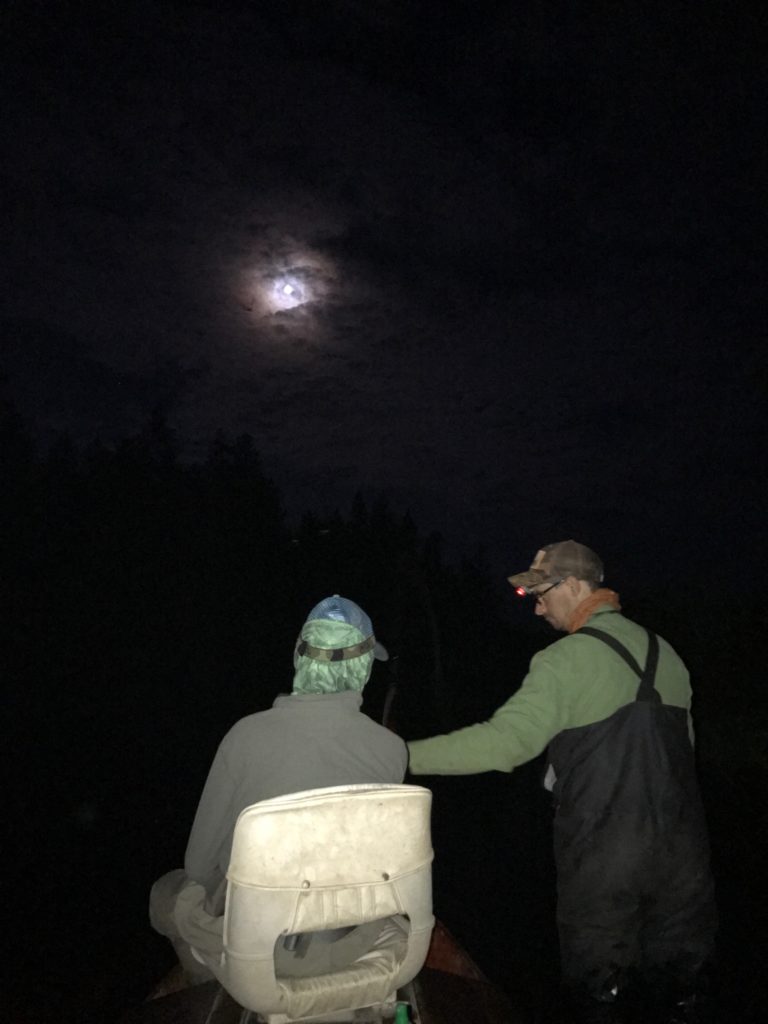 Trying to solve the moon riddle

Go out and enjoy the great and underrated season that is July.  Find a little creek, or fish some pockets on the Holy Water, or hunt the darkness for a monster, or go find some bass somewhere.  There’s much to do…

Trout Fest, July 29: Sure we promote catch-and-release, but we know how to cook trout. We’ll have trout prepared a variety of ways – an old-fashioned trout picnic! Horseshoes, corn hole, free fly casting lessons, fly tying demonstrations, conservation information and fly casting competitions with prizes for the kids. Bring the family and come to the river. We’ll be featuring a limited, special dinner menu during this day. It’s going to be a great, and hopefully annual, event.

The Midnight Derby, August 12: It’s time to sign up for the Midnight Derby.  $50 for a team of two people.  Help us help Headwaters Trout Unlimited tackle erosion sites on our up north rivers.  Games, prizes, and great fun.  As much as farce as a competition, last year we had great fishing, great fireside music, great eats, and general hilarity.  Dinner starts at 7 pm, and we ring the bell at 8 pm.  Fish anywhere on the Au Sable and Manistee Rivers.  Prizes are biggest fish, first fish, best picture, and best fly.  Take it as serious or as not serious as you wish (some people – myself included — never actually go fishing).  Limit is 50 teams.

Kids One Fly (Box) Challenge, August 12: The Anglers of the Au Sable sponsors this annual event. This is our 4th Kids One-Fly (Box) Challenge for anglers 17 years and younger. All participants will receive a complimentary fly box with donated flies and, if needed, volunteer chaperones to take them to the river (or pond, or lake, or creek) for a morning of fishing. Awards! Prizes! Anglers must use the flies in their box of choice. We do this because kids are awesome, and a kid fly-fishing is even awesomer. Our favorite event of the year. We’ll meet at the lodge at 9 am. Kids receive instruction and a casting lesson from FFF Certified Master Instructor Mark Hendricks. At 10:30 am, we go fishing! Meet back at the lodge between 12 and 2 pm for lunch, drinks and awards.   We try to have enough rods and waders for youth participants, but encourage those that have their own to bring them.