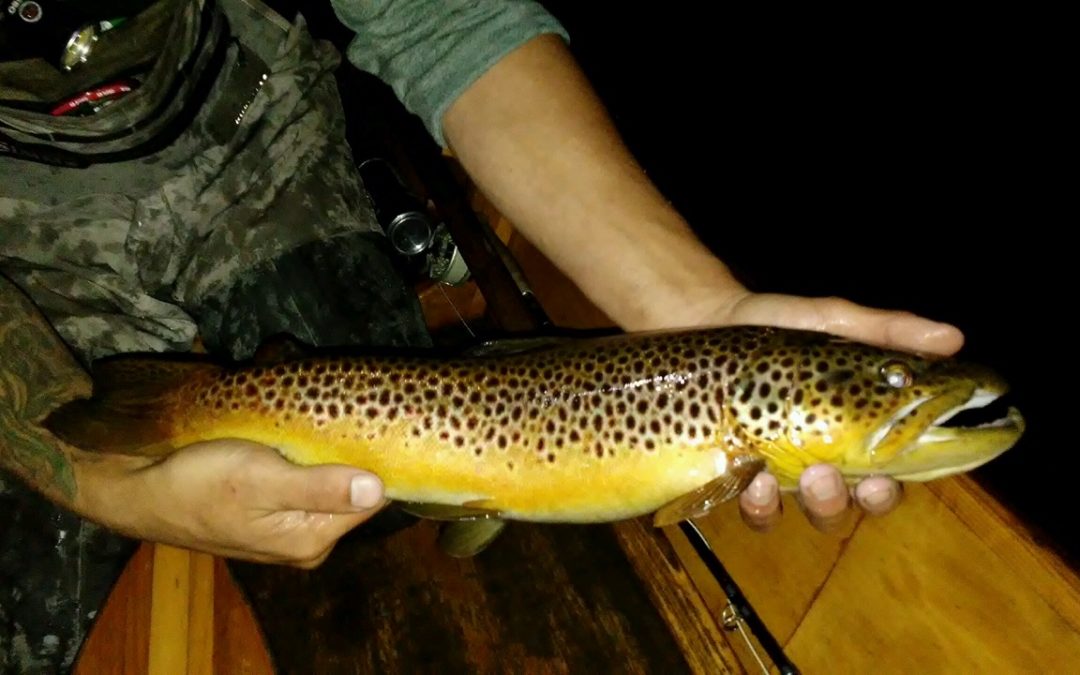 After dunking myself for the second straight night of fishing – this time in pursuit of a very large hex-feeding trout in the middle of a log jam – the prospect of fishing the morning size 18 blue wing olive hatch seemed preferable.  My waders are now upside down on the boot dryer.  There are still hex to be had, but they are no longer the main event they recently were.  The hex have become a something that might happen, a possible exclamation point to an evening spent imitating other, smaller insects.

There are tons of hatches either in progress or upcoming.  I’ve head the first few trico rumors of the season.  This diminutive, morning hatch and spinnerfall is great fun offering perhaps the most rising trout per square foot of the year.  The duns hatch and spin on the same morning.  The colder the night, the later the insects start hatching in the morning…and the later the trout start rising.  The trico will begin in force sometime in the next two weeks, and will carry on right through September.

The size 18 blue wing olive, what we call the lata, is one of the best hatches on the river.  Like the trico, the time of the lata’s emergence is related to the overnight lows.  Cold nights mean late hatches.  Cloudy days mean extended, heavy hatches with size 18 bugs that are often better than a good Sulphur hatch.  The spinners hit the water at dusk, and often mix with bat flies, Iso spinners, and cahills, along with “the green curse” – a diminutive BWO in sizes 22-26 – creating an intense evening rise that can be awesome if you match it correctly before it expires.

But to me the next few weeks are notable for being some of the best daytime attractor fishing of the season…and it would seem the weather is going to play along.  It’s called “skunking” up here, though the term “skunk” applies to dozens of different flies of wildly different designs but all sharing one commonality: rubber legs.  The theory behind good skunking conditions is that the trout have just finished the big bug bonanza of June, and are not only accustomed to getting big insect meals, but are now without them.  This is just a theory, but it seems to hold true.  Also, the log jams right now are coated in damsel flies and perhaps it is their constantly fluttering presence that keeps the fish intrigued (and turns the occasional brown trout into a missile).  Whatever it is, it’s fun to take a mile or two of river, a small box of big flies, and to wade down the center twitching, popping and deadrifting buggy flies in and out of the shadows. 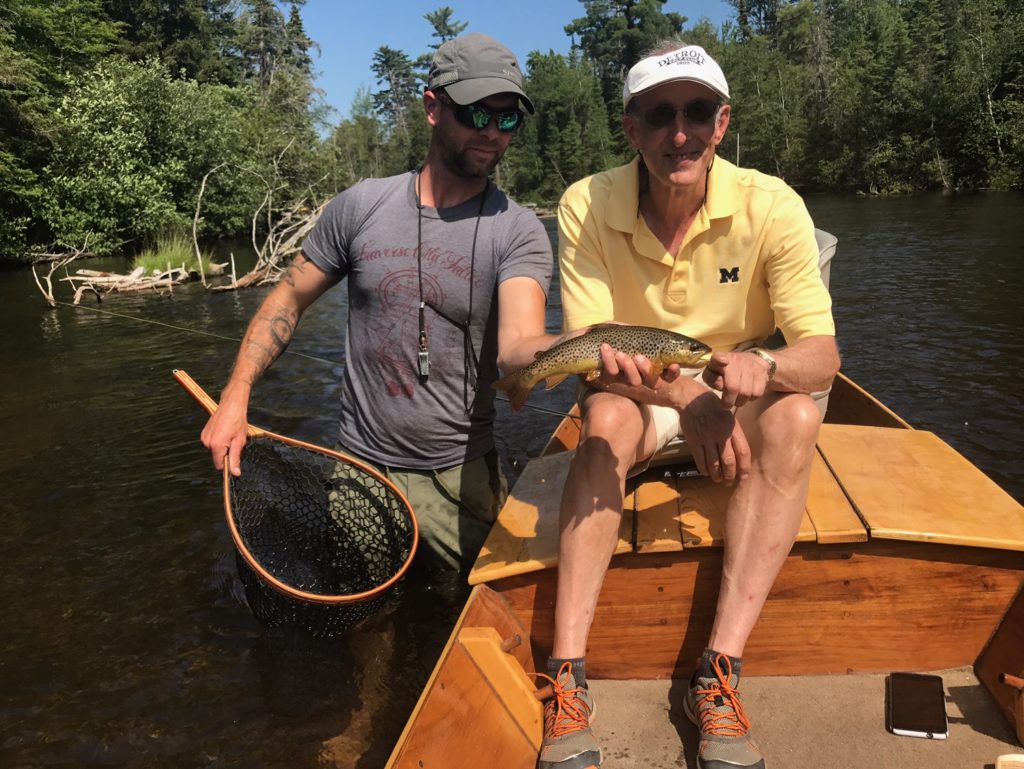 With the higher than usual water levels – which are a great thing! – fishing a small streamer, or a beadhead dropper off the back of one of these foam bugs, can do surprisingly well, especially on days that the fish are shying away from the surface.

For you night fishers, we are at full moon right now, the river last night was very bright and one could see the bottom in the shallower runs.  The best way to catch fish after dark in these conditions is to blind fish a dead-drifted hex (which worked last night) or to fish upstream with big foamy bugs, or simply focus your efforts on the darkest corners of the river.  The best of the night fishing is yet to come this season…

Summer on the Au Sable demands that us anglers take care with our presentations, our shadows, our leaders and tippets.  Instead of regular nylon, considering using fluorocarbon.  Instead of a 7’6” leader, try a nine foot or longer.  The rewards, at least in the daytime, are usually measured in quantity rather than quality, though the occasional big fish does surprise. 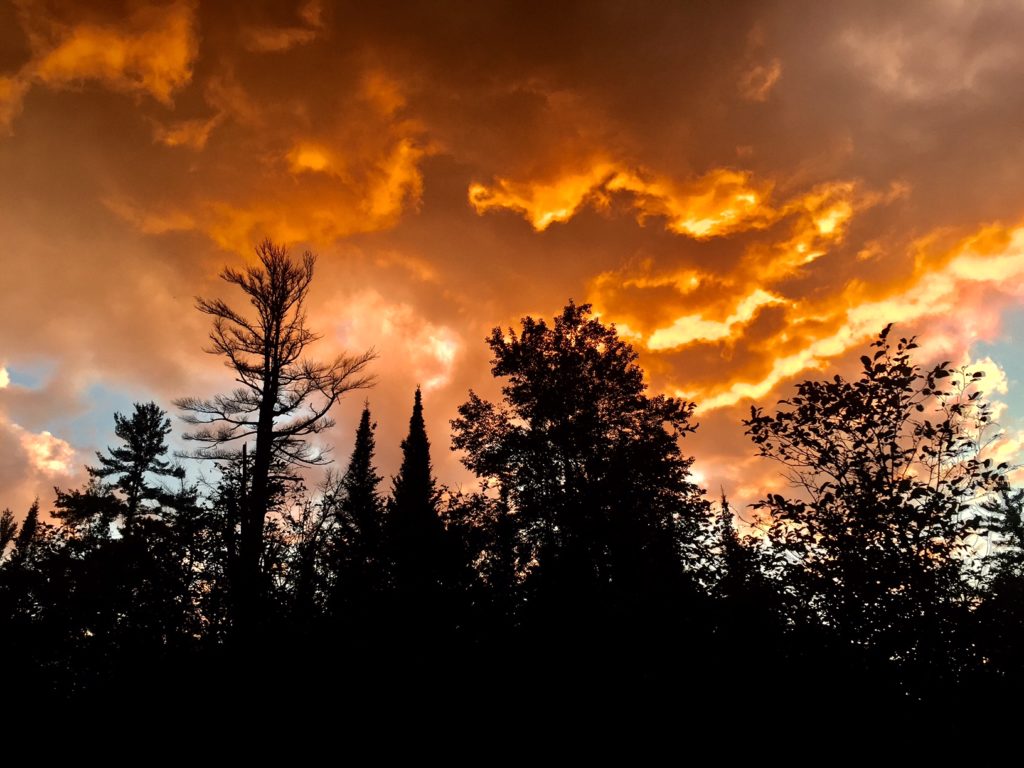 Our rivers are in perfect shape for this time of year, and the forecast for this week is pretty perfect as well.  Highs in the 70s make for some fine summer fishing, and keeps the trout looking up.  I expect we’ll see fish rising by 8 am most mornings, and more or less rising the rest of the day, until dark-thirty.  It should be a great week on the Au Sable and Manistee.