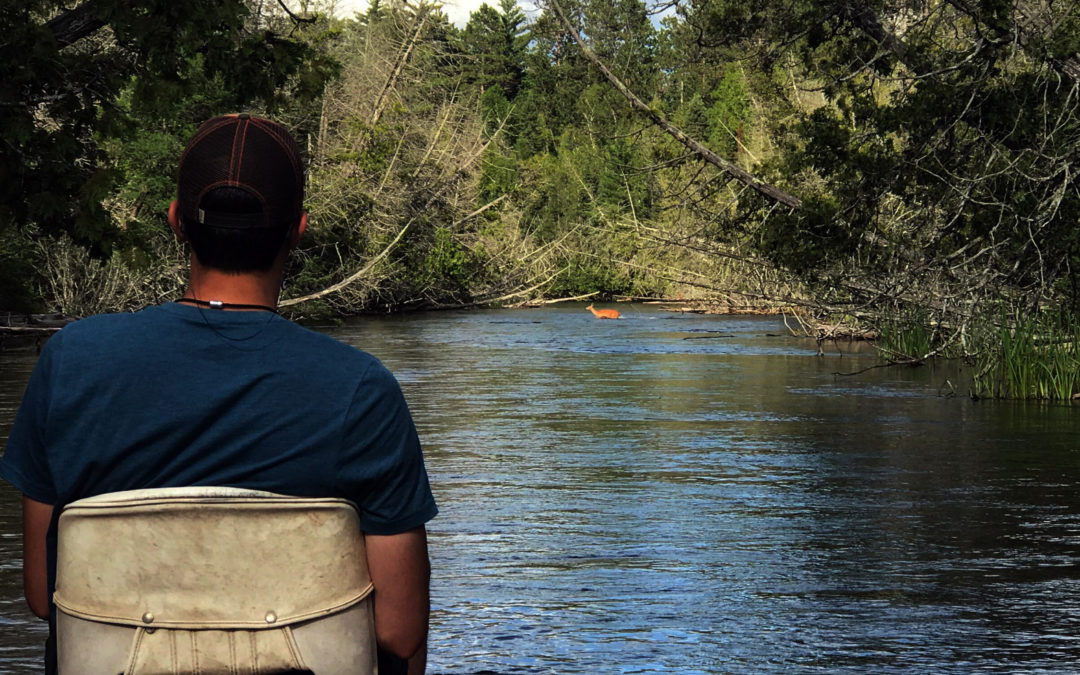 My journey into night fishing began at a chain of pools on the lower Holy Waters.  They are three of the most different pools you can imagine.  The shallow fast one with the springs on the north bank, the swift deep one with gravel beds scalloped by generations of spawning browns, and then the long slow deep pool, the granddaddy of them all, a pool they used call the Twelve-Foot Deep hole, the pool that produced this in 1964: 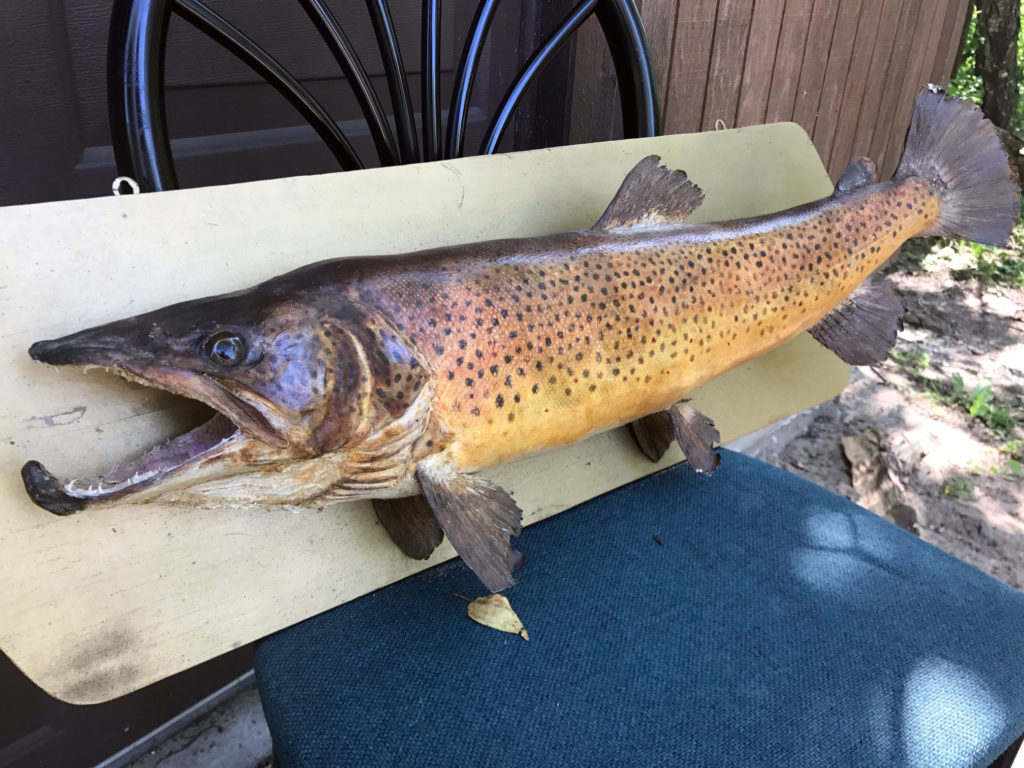 The story of this mount began fifty years ago, but for me, it began last week.  As I’ve been enjoying the evening spinnerfalls, I decided to fish the top of those three nightfishing pools – a great spinner fall run.  I was armed only with a four weight, a few spools of tippet, and a box of olives.  On my walk out I ran into an old acquaintance, a shadow us teenagers used to pass by in the night along that same night fishing haunt.  He was sitting on the bank, wearing waders, and waiting for it to get dark.   We laughed to remember us, the teenagers, hooting and hollering in the dark as he swung his flies quietly through…undoubtedly wishing we’d fish somewhere else for once!  Near the end of our conversation, he asked if I’d like an old mount that he had in his attic caught from a pool we call by one name, but he called the Twelve-Foot Deep Hole.

You bet I did.

Full circle: the mount arrived Sunday morning.  In a way, it’s like discovering that there really were monsters under my bed.  It’s not just that it’s a giant brown, but it’s a giant brown from the pool I used to fish, the one I imagined was trailing my mouse across a star lit river like some intergalactic trutta.  I couldn’t stop staring at it all day as it lay unceremoniously across the tying bench in the shop.  There it was!

I looked at Helmicki as he studied the trout:

“What are you doing tonight?” I said.

“What are you doing tonight?” he said.

So we went fishing.  It was the kind of perfect ripe summer day with heat and clouds and a pungent, alive air.  The flowers were bloomed.  The damselflies bounced.  Within minutes a great trout chased his streamer across a gravel flat…twice.  Two log jams later, this trout did the same, and made the day before it had truly begun. 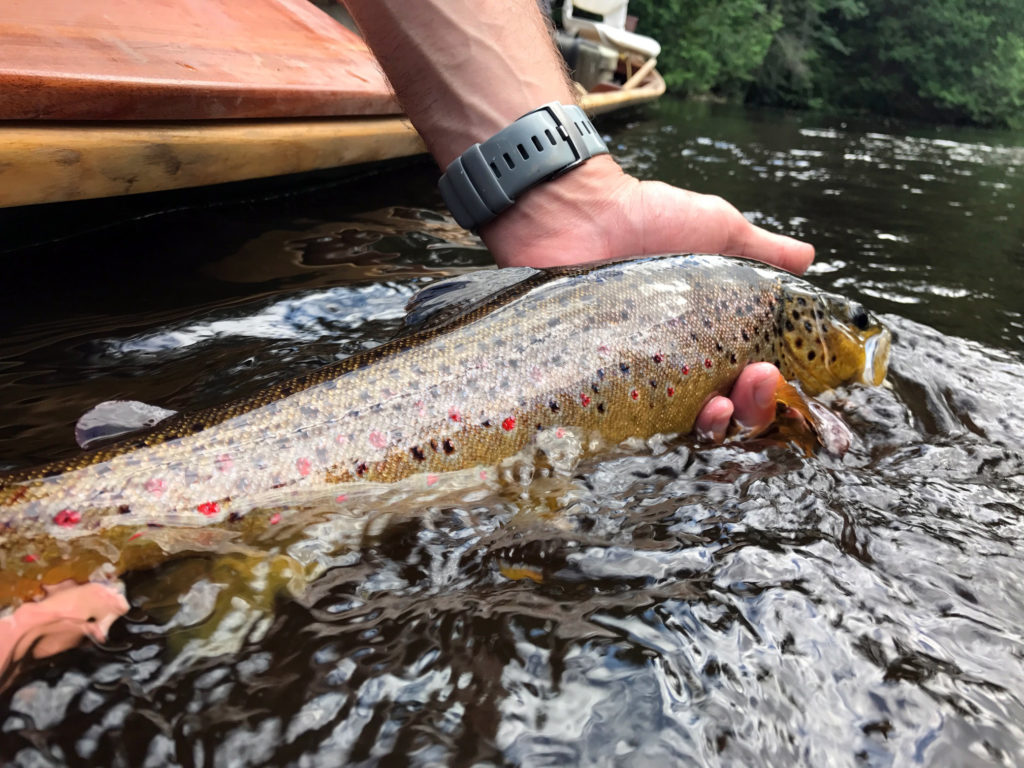 We switched to dry flies and started finding fish on a yarn skunk (moose, brown yarn, deer, hackle, brown rubber legs).  The fish were blasting it, but not eating it well.  Switched to fluoro: same thing.  Tried the twitch.  Dead drift.  For one five-minute stretch I’ll bet I had a rise to 50% of my casts and hooked just a bit more than 0% of them.  The right thing to do would have been to switch to something smaller, a deer fly, a Patriot, or even an Iso.  Instead, we paddled.  Fished some more, caught some, caught another nice trout on a streamer.  Checked the spider webs for tricos (North Branch, upper Holy Water: yes; South Branch, lower Holy Water: just starting).   Saw a few random little olives.  Caddis in the backwaters (size 18, dark gray, try a Hemingway).  Some Isos.  More damselflies.

At dusk we hit the olive spinners in a good long glide.  The size 18 spinner fishing has been awesome.  The trout were not easy but they weren’t too difficult.  One bigger trout (and I mean this in the context of BWO fishing on the Au Sable) got broken off and kept rising: a real tough guy.  A few others seemed to switch to a small late drop of Iso spinners (or maybe they were eating the cahill spinners we also saw), and a few even seemed to be slapping at the sparse hatch of yellow stones.  It was a nice little bit of bubble line fishing.  The river was empty.  We didn’t see another boat, canoe, or kayak, and only three wading anglers the whole float and none at dusk.  July continues to be underrated.

But it was the night fishing we craved.  We slid into the top of a good wood-strewn stretch at prime time.  The air was already colder than the water and the mist was creeping in from the sides of the river.  Downstream a beaver dropped its anvil tail.  Up close this is a terrifying experience.  At a distance, it is somehow comforting.  You’re not too lost if the beavers know where you are.

The fish were there, but they were playing with their food.  The only trout hooked was a very large one that ate with an unthinkably loud explosion and then went beneath the boat and stayed there for a few seconds before the hook anticlimactically came loose.  “That was a big fish,” Alex said.  But was it the fish.  Probably not.  Is it ever the fish?  Probably not.  Did the fellow who wrestled that trout from the bottom of the Twelve-Foot Deep Hole think it was the fish, or was there one yet bigger, from an even deeper, more shaded corner, always lurking in the wake of his mouse?  I’ll bet so.

The river has been basked in sunlight for two straight days and we could use some clouds…and it looks like we might get them.  But the river – all the rivers – are in great shape from the consistent rain from earlier this month, and the extra water will make for perfect summer water conditions.  The tricos will be on the water every morning from here until September.  Go lean, go small, and take a few Griffith’s Gnats with you.  The size 18 olives offer the best dry and dropper fishing of the year, and start right in the middle of the trico spinnerfall.   On cloudy days, you have more options, from all the above, to streamers: 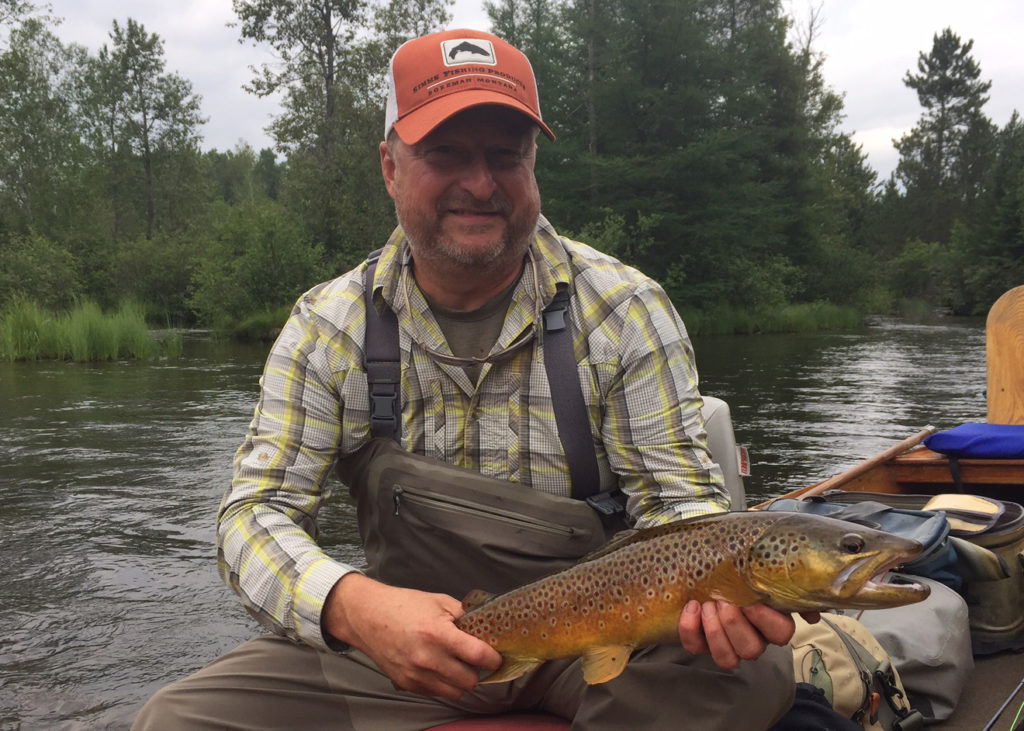 We have tons of cool events coming up, including Trout Fest on Canoe Marathon Saturday.  Bring the kids and enjoy a good old fashioned cook-out!

Trout Fest:  Sure we promote catch-and-release, but we know how to cook trout. We’ll have trout prepared a variety of ways – an old-fashioned trout picnic! 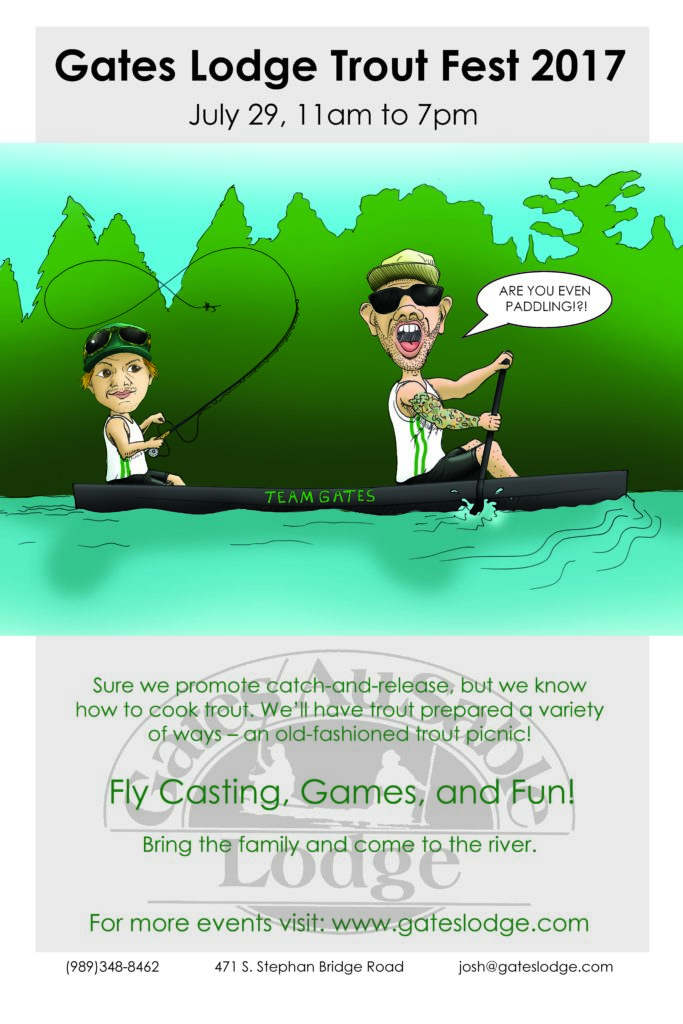 The Kids One Fly (Box) Challenge: The Anglers of the Au Sable sponsors this annual event. This is our 5th Kids One-Fly (Box) Challenge for anglers 17 years and younger. All participants will receive a complimentary fly box with donated flies and, if needed, volunteer chaperones to take them to the river (or pond, or lake, or creek) for a morning of fishing. Awards! Prizes! Anglers must use the flies in their box of choice. We do this because kids are awesome, and a kid fly-fishing is even awesomer. Our favorite event of the year. We’ll meet at the lodge at 9 a.m.. Kids receive instruction and a casting lesson from FFF Certified Instructor Mark Hendricks. At 10:30 a.m., we go fishing! Meet back at the lodge between 12 and 2 p.m. for lunch, drinks and awards. We try to have enough rods and waders for youth participants, but encourage those that have their own to bring them. 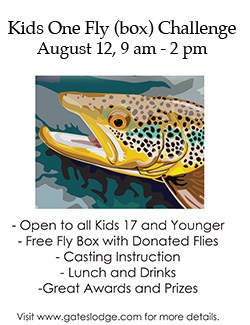 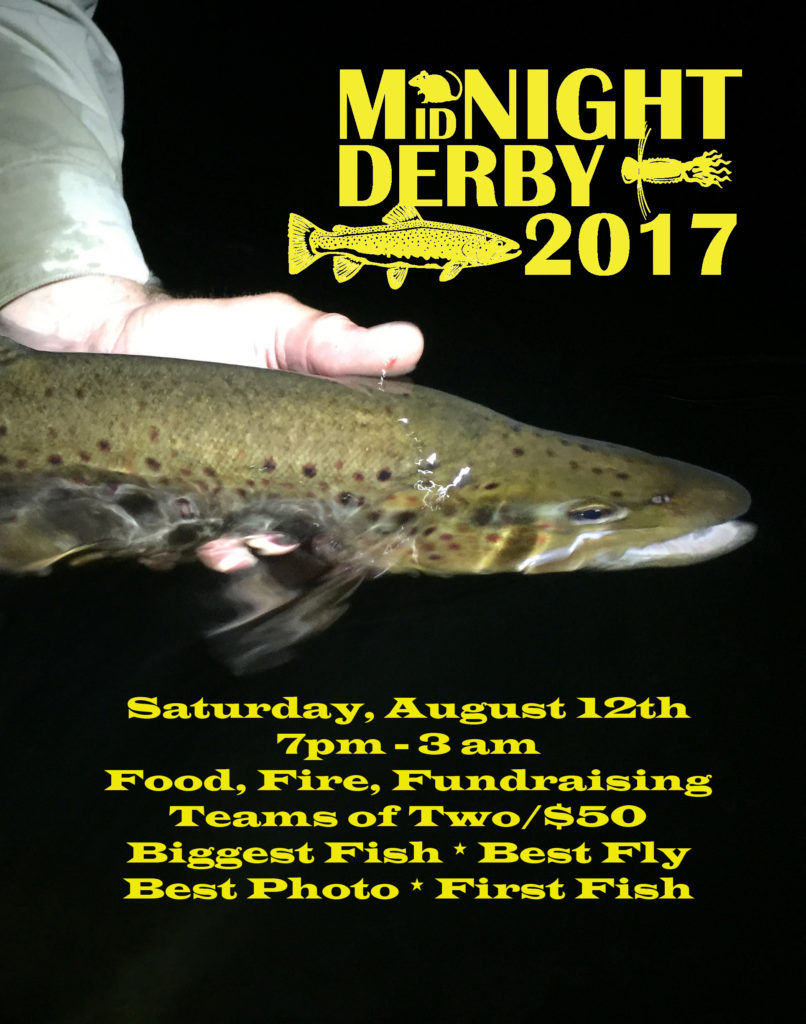