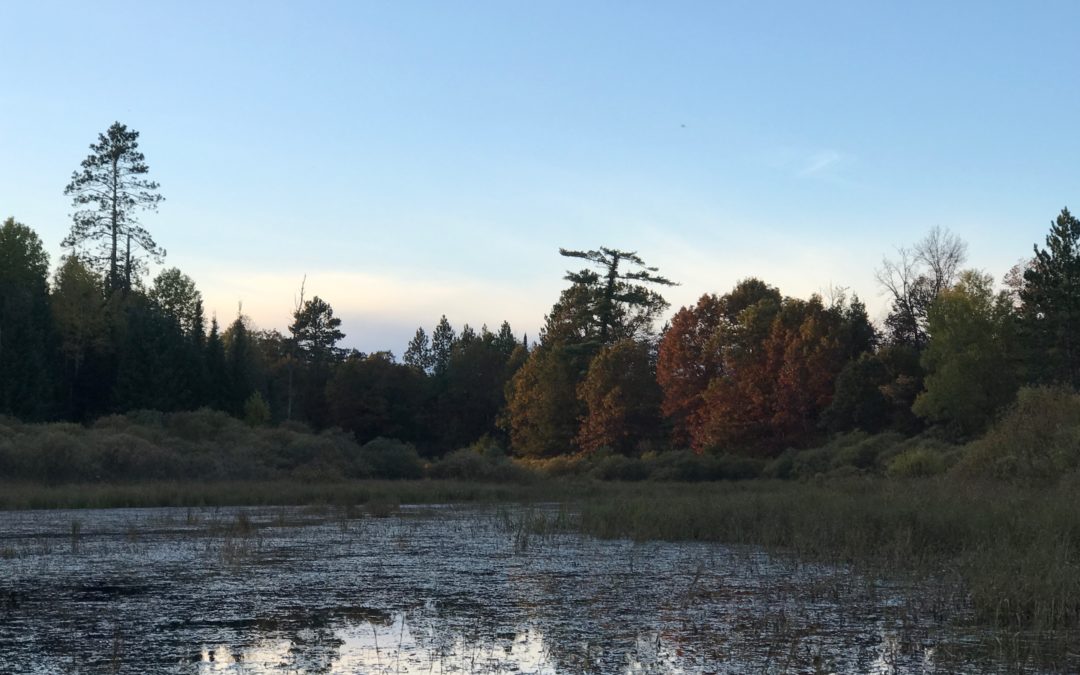 I always think of the next ten days as October’s sweet spot.  The birds are migrating, the leaves are still in color, the trout are dressed up for the spawn, the fall BWOs are hatching, and the tamaracks are starting to glow (soon, when the browns are on their beds, the tamaracks will be golden).  There’s too much to do.   In any one day, a person of varied interests can duck hunt, bird hunt, fish streamers, hit the afternoon rise, and then deer hunt in the evening.  I’ve pulled that off a few times.  It’s a good sorta tired. 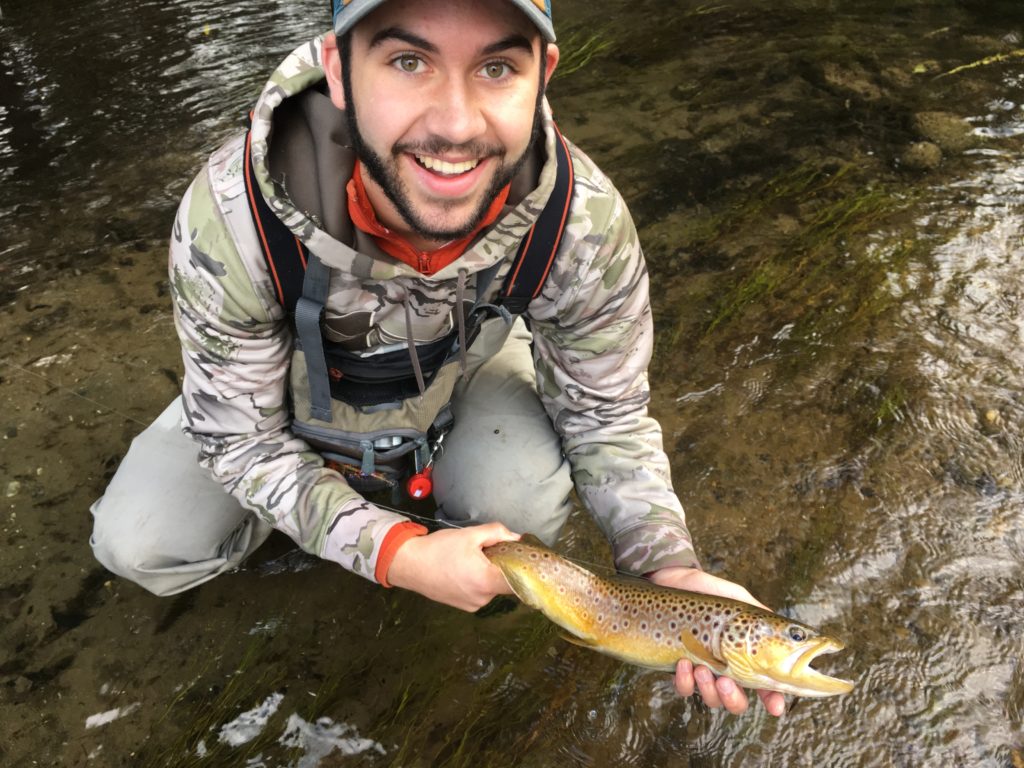 We had a good weekend of fall fishing finally.  The weather perfectly crashed and the trout responded accordingly.  The float we picked for Sunday was probably the wrong one – the water was very stained, almost to the dreaded chocolate – but this hard-pulling brown exploded on Greg’s streamer and gave him all he could handle. 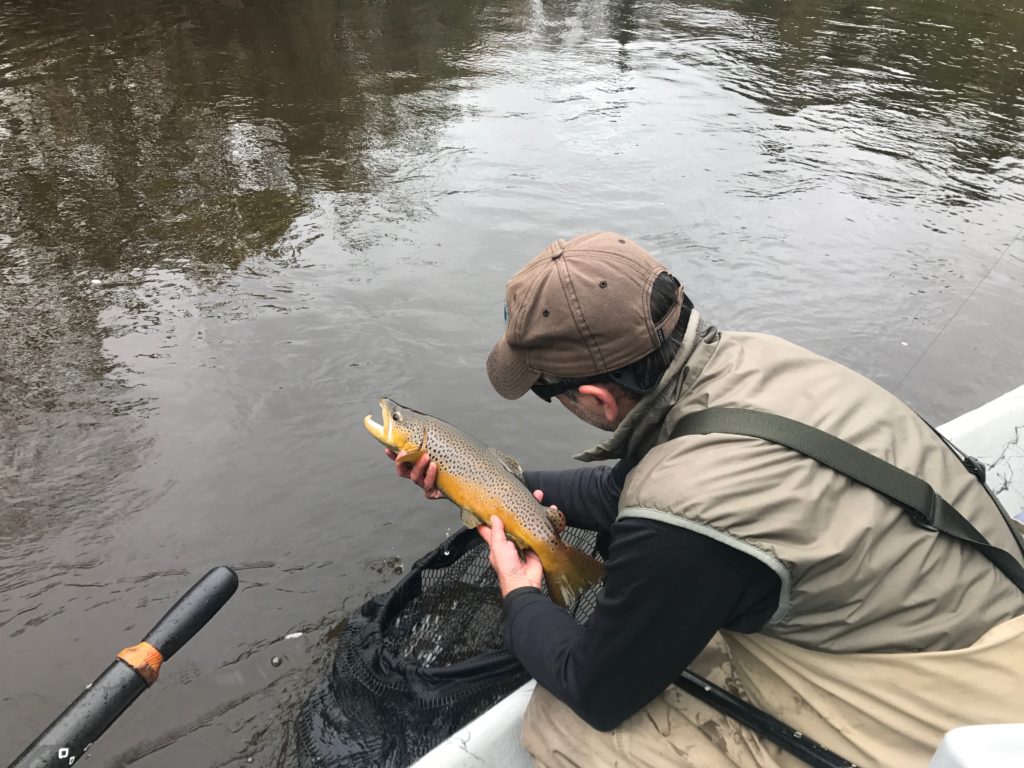 Further downstream, we came across an unlikely sight.  We watched my friend Neil cast, strip, hook and land a dandy brown.  He didn’t even know we were there until he’d landed the fish!  It’s his home water.  He knows every nook.  I like to float and streamer fish, but there’s something to be said (both as a comment on quality, as well as effectiveness) to really exploring the river as only a wading angler can. 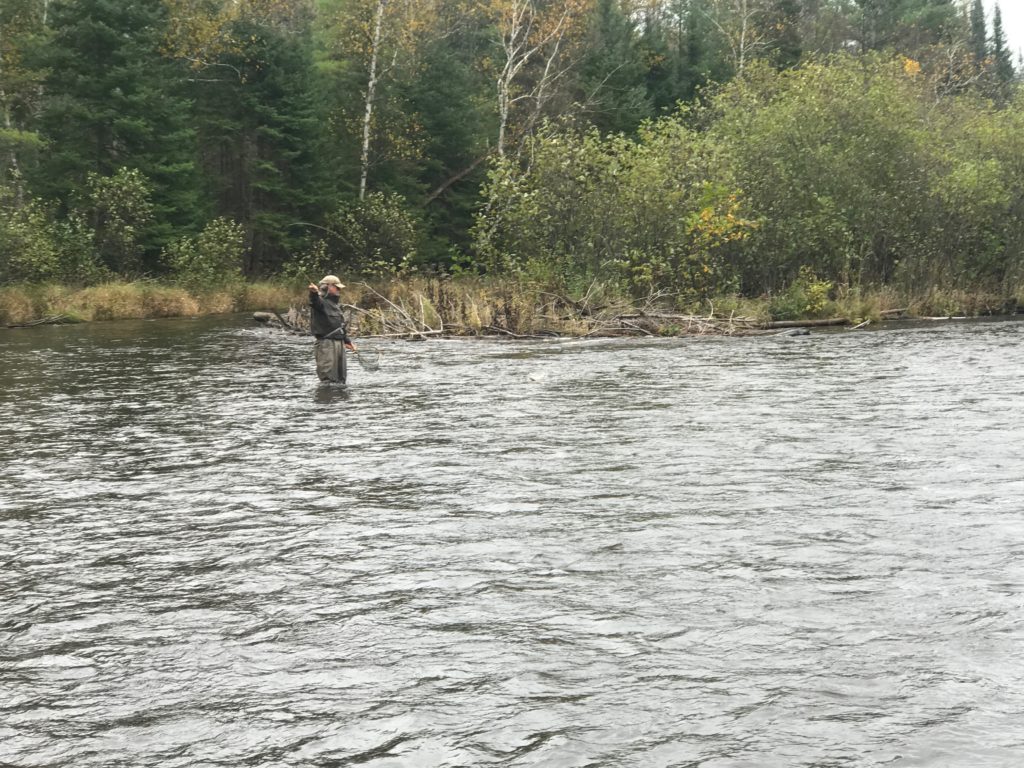 This weekend is looking to be another beautiful one.  This time of year that means nymphs and streamers.  We’ve been doing well with both.  For streamers, small to medium sized flies fished quickly have been best.  For nymphs, standard nymph rigs fished under an indicator or dry fly have worked, as has swinging soft hackles and traditional wet flies through shallow water sections.  The BWOs will hatch in these sunny conditions, but they’ll take to the air rather quickly.  I do think that dry fly anglers will be able to raise some fish on the South and North Branches, as well as the slower sections of the mainstream (particularly up in the Holy Waters) fishing size 16-18 Adams parachutes and BWOs.

But once again we’re anxious for more “nasty” fall weather.  It looks like next week we’re going to get it.  If you like streamer fishing or fall BWO fishing or both, I look at the crashing temperatures, the threat of rain (and perhaps some snow), and I see trout.  Trout eating dries on a quiet North Branch flat.  Trout chasing streamers through a fast Holy Water riffle.  Perhaps a trout icon could be substituted for rain in the 7-day forecast boxes.  So instead of some crappy 50-degree day with forty mile-an-hour winds, you’d see picture of Terry instead: 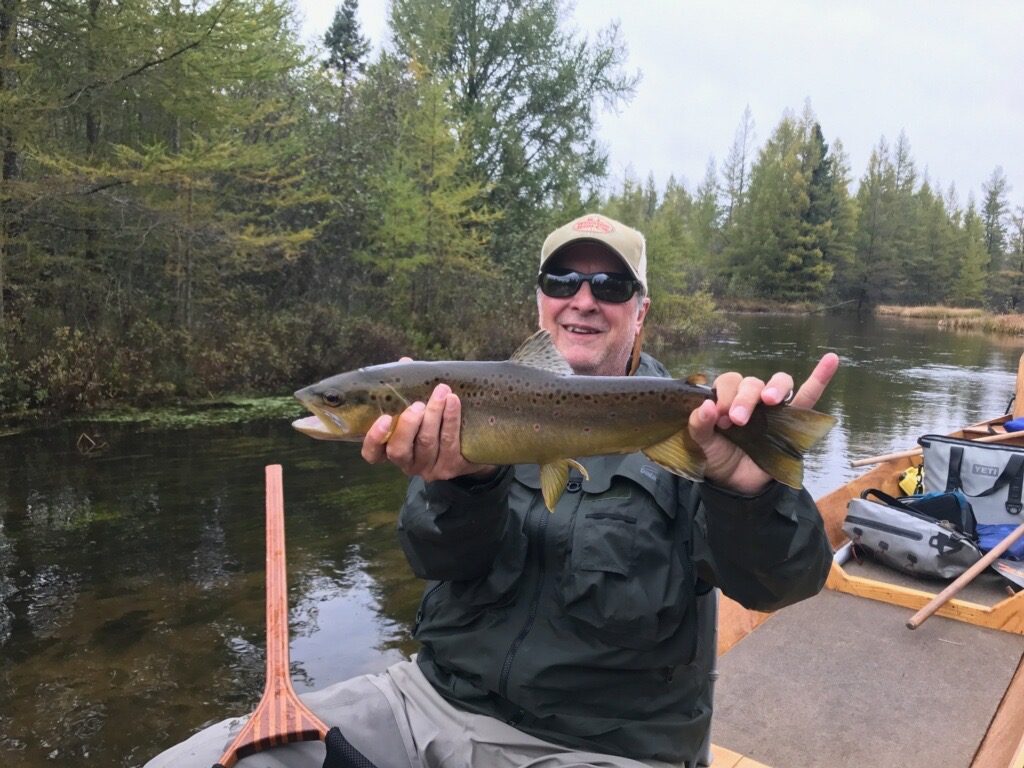 Many of us go at this recreation stuff pretty hard in the fall.  Jordan, Denny and Kim just returned from a steelhead trip in Wisconsin.  Nethers is off bird hunting…somewhere (all I know for sure is he’s somewhere in America, which might be all he knows as well).  Matt and Katrina have a nice buck hanging in Matt’s garage.  Soon it’ll be streamer camp for me, and I know I gotta get tying for that.  What keeps you going is the powerful beauty of fall, and the elusiveness of the quarry.  Today I got to ride with fisheries biologists Tim Cwalinski and Mark Tonello as they did a fish survey below Mio…and I saw plenty of the quarry.  The fishery below Mio looks wonderful. 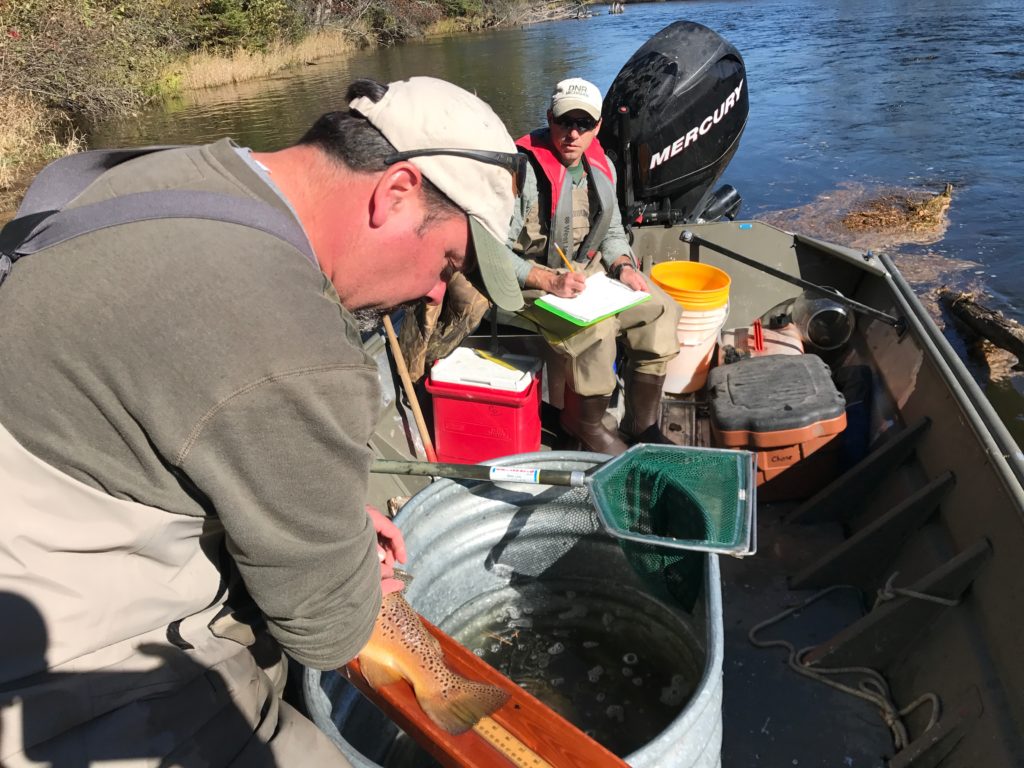 Fish surveys are hard work.  Lift, measure, clip, release, and record.  Change water.  Repeat.  But what I noticed was the care both had for the resource, the way they stopped to revive, check, and then further revive a big male brown until it shot, healthily, into a log jam.  These were beautiful trout, reduced in a necessary, momentary way to statistics for purposes of science and conservation decisions.  But after releasing one great trout, Tim looked at me with the eyes of an angler and said, “I think everyone would be happy to catch a trout like that.”  Yep. 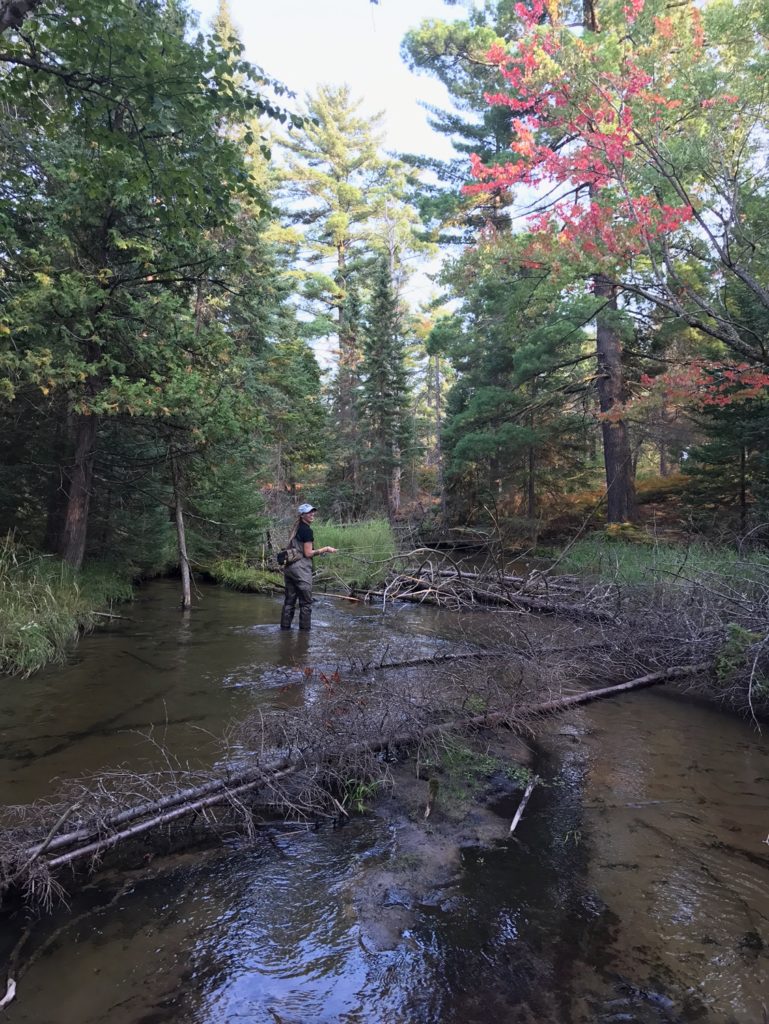