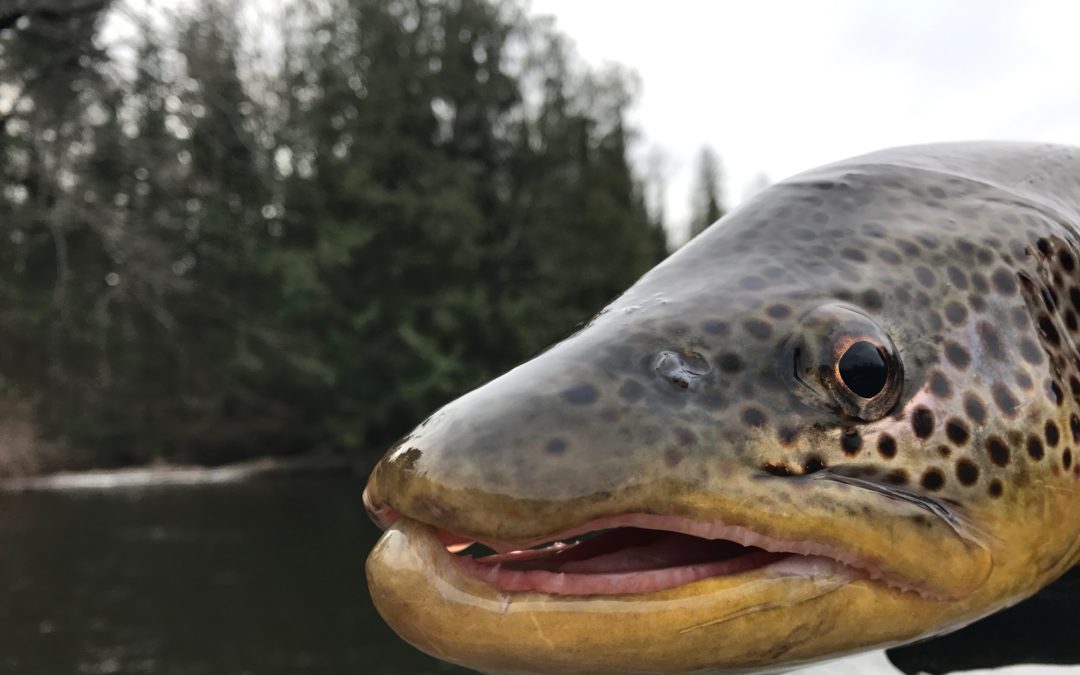 Today would have been a better day for fishing…but I went hunting anyway.  By about 8 am I was soaked to the bone and the wind wouldn’t quit.  Saw a buck trailing a doe through the early morning gloom but the situation wasn’t right and I was already thinking about breakfast in a warm home.  I like deer hunting but apparently not as much as I like fishing.  Just wrapped up streamer camp – three very long days of chapped hands and cut fingers and, this year, lots of trout.

The river is definitely settling into post-spawn mode.  The female trout were skinny but still fought hard.  The males were well colored and hook-jawed.  We tried a lot of different streamers but black/brown/tan sculpin-shaped flies, as well as a weird gray fly Greg ties that we call the diving shrew, were best.  The fish wanted a methodical jigging retrieve through the trenches and around the drop-offs.  We didn’t do well on flies with a lot of “swim”.  My best fly, while articulated, had very little dip and dart and looked pretty boring in the water. 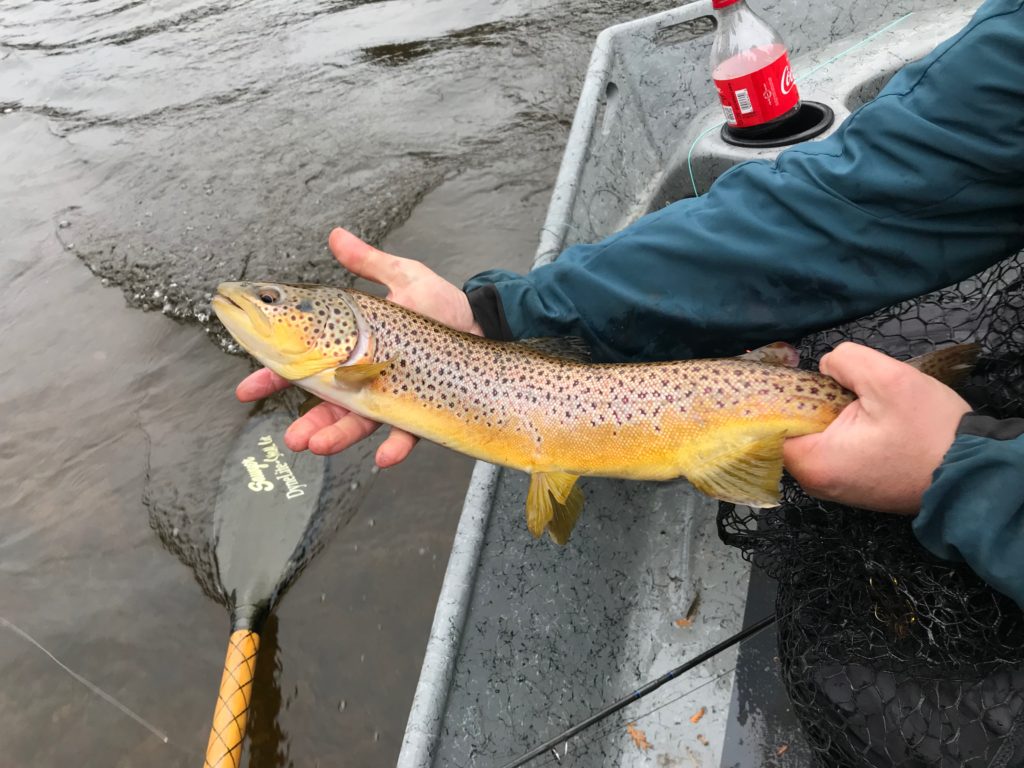 We fished a few different stretches of river and found roughly the same thing in every reach.  Day one was the best.  Andy caught the first trout at around 8:15 am and Greg caught the last at around 5:30 pm.  All three days we moved a lot of 12-15” fish and a fair number of fish over 20”.  On the last day, at the same spot Andy and I simultaneously hooked two giant brown trout last year, I had a great trout – the trout of the week – follow my fly to the boat.  Because of the glare I didn’t see the follower until it was too late…I’d already started my next cast.  I dropped the fly back into the water but the fish spooked off.

A few bends later, just above the take-out, the sun came out and two otters played in the river.   A pile of ducks that we’d spooked from a backwater circled in formation for a safe spot to land.  We could see the truck waiting for us at the landing.  Distant rifle shots sounded as folks prepared for the opening day of rifle season. 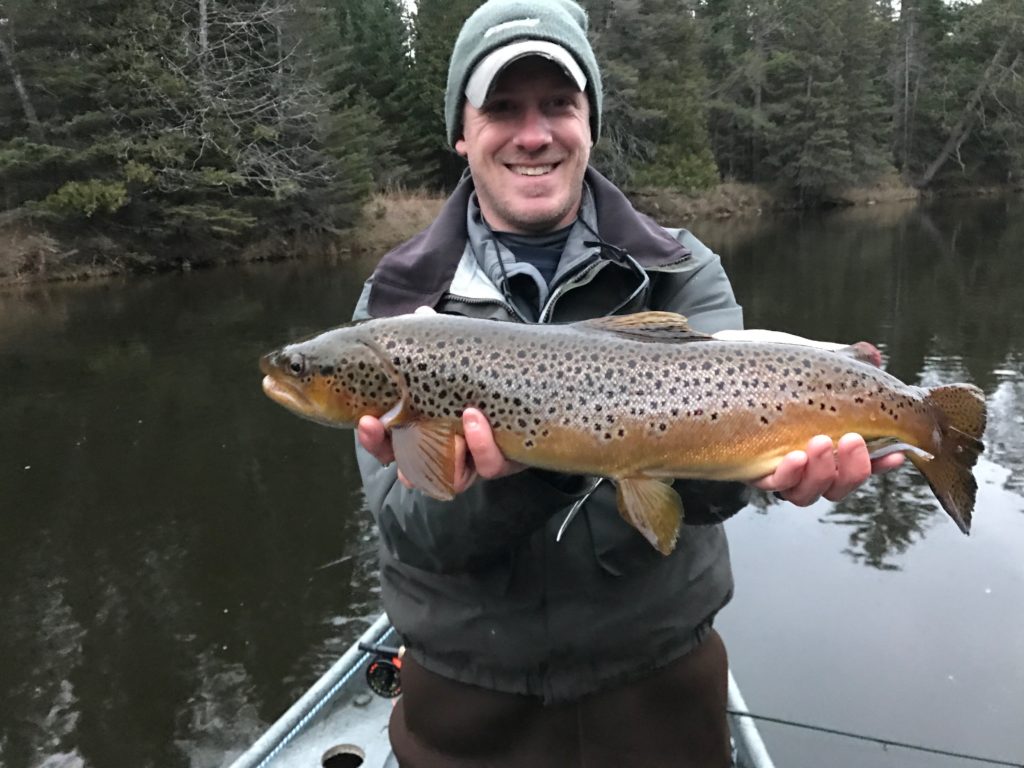 I’m psyched for winter, and winter fishing.  Barring a winter like 2013, the good post-spawn fishing should continue right through December.  The river is now nice and clear – which is what you want when the water temperatures are cold.  While I tend to fish streamers on the cloudy days and nymphs on the sunny days, there are no hard and fast rules.  A south wind is good.  Warmth is good.  Other than that, fish with care around depth and slow water.  Learning to read water speed, and then to keep the fly in that water, is the key to being a successful winter angler.

The Mason Tract still has a partial blockage that requires some nimble log hopping by folks that have tried that move before.  Our third attempt at clearing this will commence this week I suppose.  The lower South Branch below Smith Bridge is blocked and by all reports impassable until further notice.

We were closed today but will be open tomorrow at our normal hours from 9 am – 2 pm.  Aside from Thanksgiving Day, the fly shop is open…and we’re excited to help anglers with their fly tying and fly fishing this winter.

Our winter team has been busy behind the scenes designing a new online store.  The launched version won’t be pretty, but we’re excited by the new platform, which will allow us to more adequately display our store online.  We hope to have it live and working by Thanksgiving.  Our winter catalog should be shipping around the same time.  We truly appreciate the holiday orders.