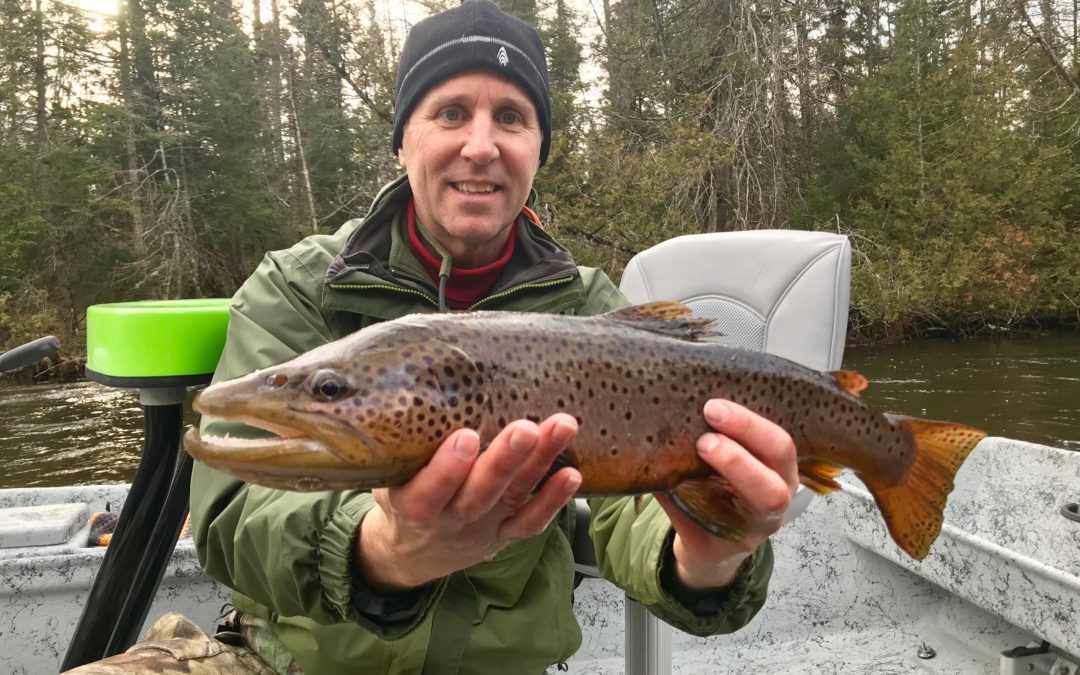 Last night was one of those windy December nights when the temperature plummets and everything freezes and you wake up with a little snow on the ground and more falling and, well, it’s winter.  The next ten days look to be a deep freeze.  The kids had no school yesterday because the wind knocked out the power.  Now I’m watching a few birds at the feeder and writing this between stints organizing the tying desk.  It’s time to get cranking.

The only day I made it out fishing this week (sadly) was one of those day-late, dollar-short afternoons.  A big rain front came through Tuesday morning and the fishing was really good early in the morning and shut off in the afternoon.   Matt and his future brother-in-law Willy had some great fishing until about 1 pm.  By 3 pm the river was “dead”, as Matt put it, which is when Helmicki and I slid the boat in and began fishing.  And it was dead…except for the pike fishing, which was pretty good.  It wasn’t long before we were both throwing pike flies in the backwaters. 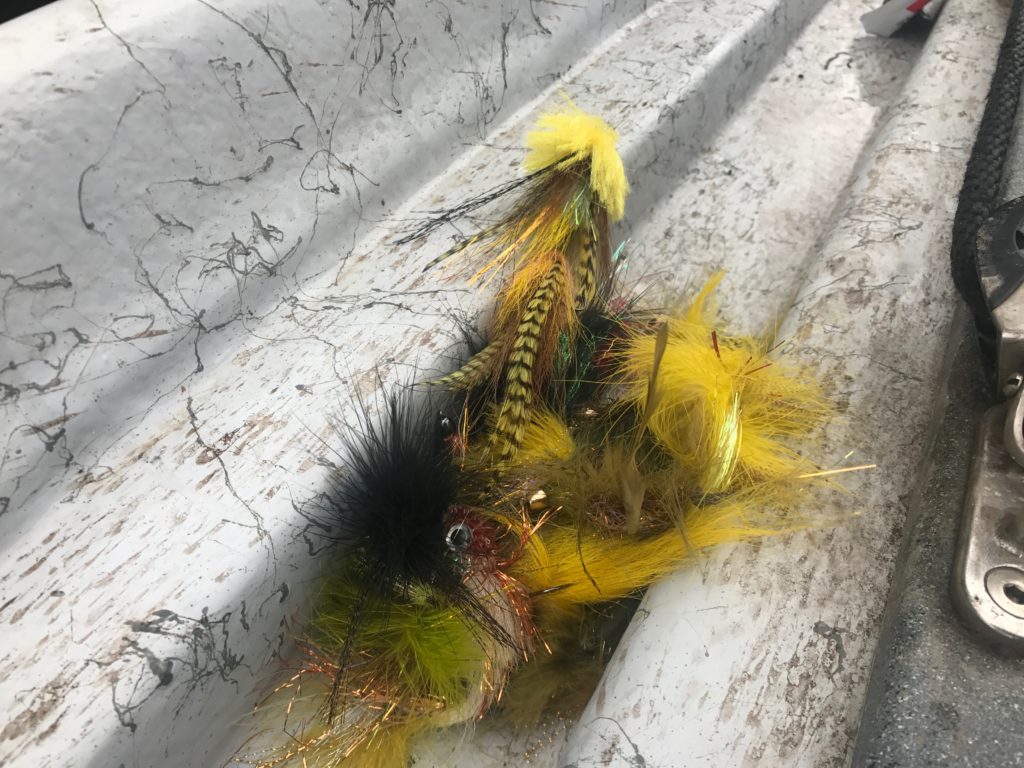 Pike are slimy fish-eaters but they are pretty darn good slimy fish eaters.  The first fish charged from a backwater and raised a wake, turned away, and then ate the fly on the next cast.  Not a monster, but fun: 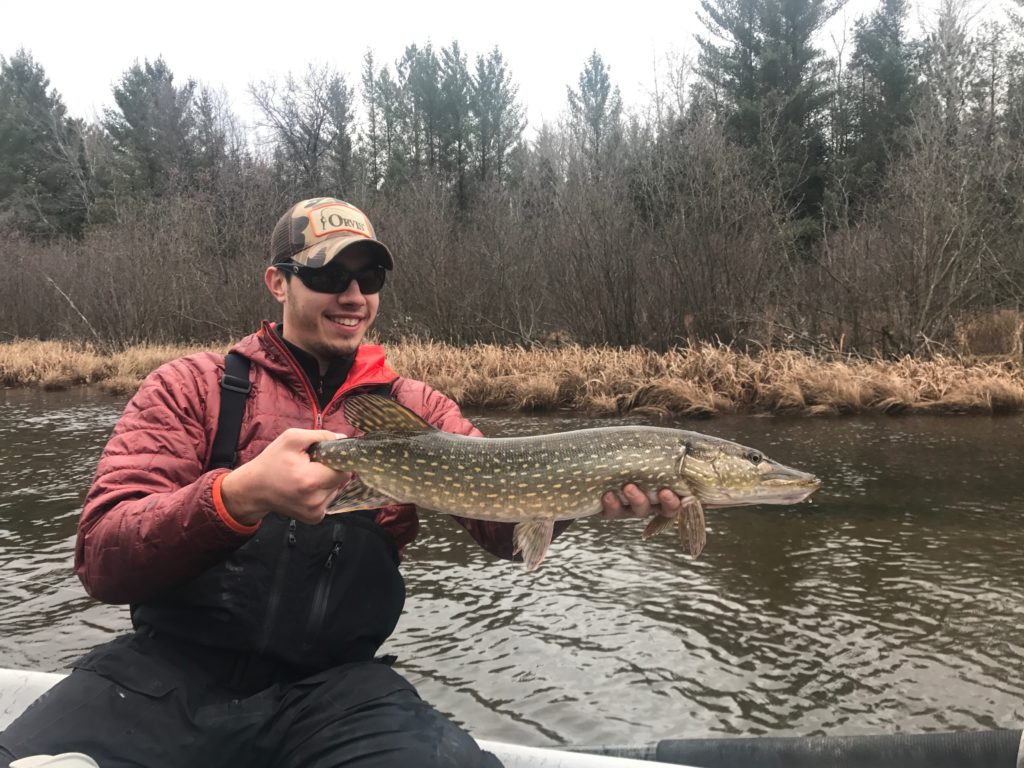 We’ve been spoiled this fall with some good fishing weather.  I’ve been a bit surprised by some of the slower fishing days but there have been some dandy days as well.  As the overnight lows drop into the single digits – which they’ll do here in the valley these next ten days – the trout will slide into their winter spots and pretty much stay there.  I don’t think there’s a lot of trout movement in the winter.  Look for fish in the pools and soft edges.  I think when the fish feed they either set up in the inside bends and tail-outs, or they hunt around the slow water banks.  I’ve moved a lot of fish in the winter from the silty “hex water.” 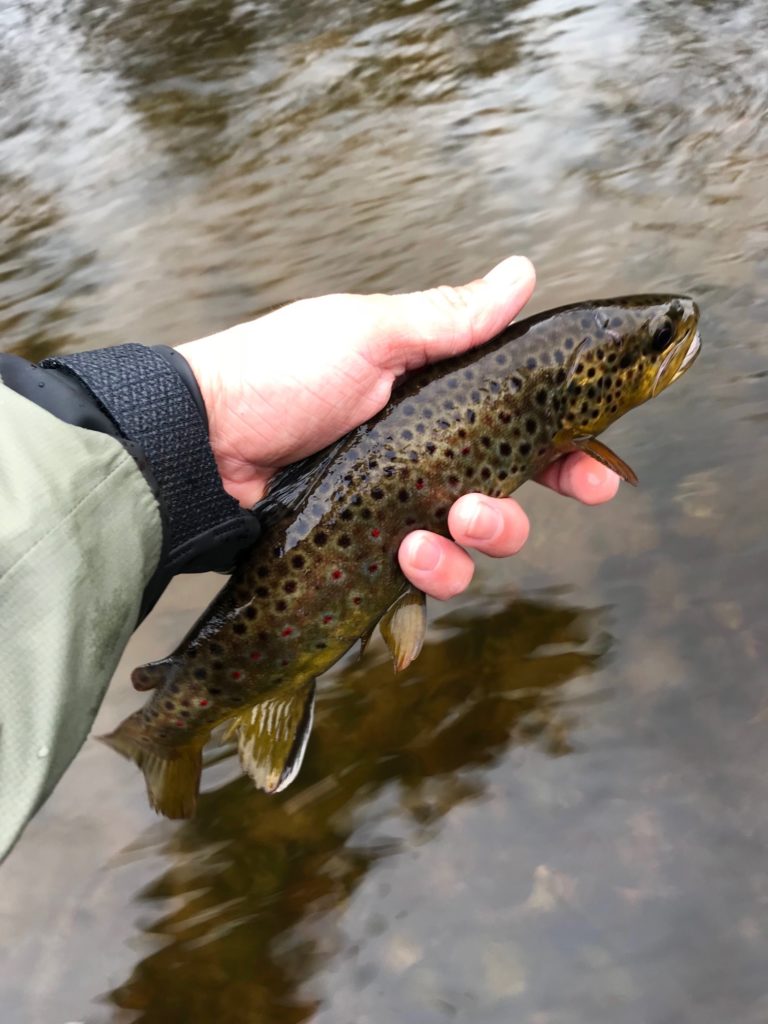 I think you can catch a trout pretty much any day in the winter, but this cold will make fishing very difficult.  The rivers being a little high doesn’t help matters either.  So if you gotta go…go!  This weekend will be in the 20s, which is enough for me.  But for many, it’s time to start thinking about next year.  Which is what I love about tying flies.

The best way I know to tie is to set everything out perfectly.  It’s not the way I always tie – many a night has been spent furiously improvising to solve some riddle – but in the winter, a methodical one-perfect-fly-at-a-time approach can offer a brief Zen, which is important, because a fly is best tied when the heart rate is low.  Jamming to heavy metal and trying to zip through a bunch of flies can lead to a pair of tying scissors flying through dry wall.  Non-tyers may never know what it feels like to break the thread and watch a good fly unwind.  For a moment, it feels like you wrecked your new car on the way to pick up your prom date.

I’m more pumped for this tying season than any before.  John Sheets has been dying deer hair patches by the dozens, as well as beaver and muskrat.  We’ve got a new Hendrickson tied with ruffed grouse tails (we call it the Gradams).  We’ve got some pretty sweet bucktails we’re going to begin dying as well.  Couple that with some new, great tyers to learn from, and we should have some killer Free Fly Tying Saturdays this year.

Our Holiday catalog is out…in pdf form at least.  Still waiting on the printer to print it and ship it.  Read.  Share.  Circle what you want!  If you don’t see it, we can get it for you.  Gates-2017-Holiday-Catalog 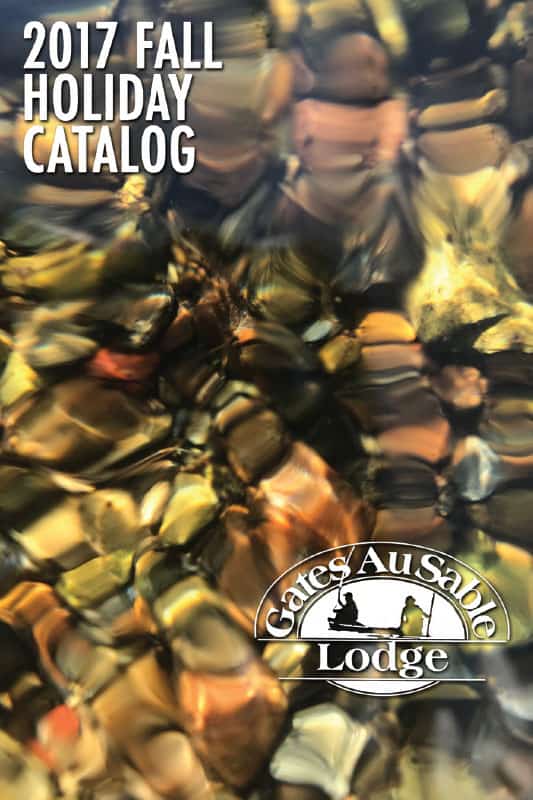 We’ve added a bunch of new products to our online store.  Click here to check it out: www.gatesflyshop.com

Some of our favorites:

The New Scott G Series fly rods are in.  We demoed these all winter.  Perfect Au Sable rods with way more power in the hand then the precursor.

American Made Performance (AMP) Shirts are selling fast!  Born on the North Branch, excellent artwork, and $39.95.