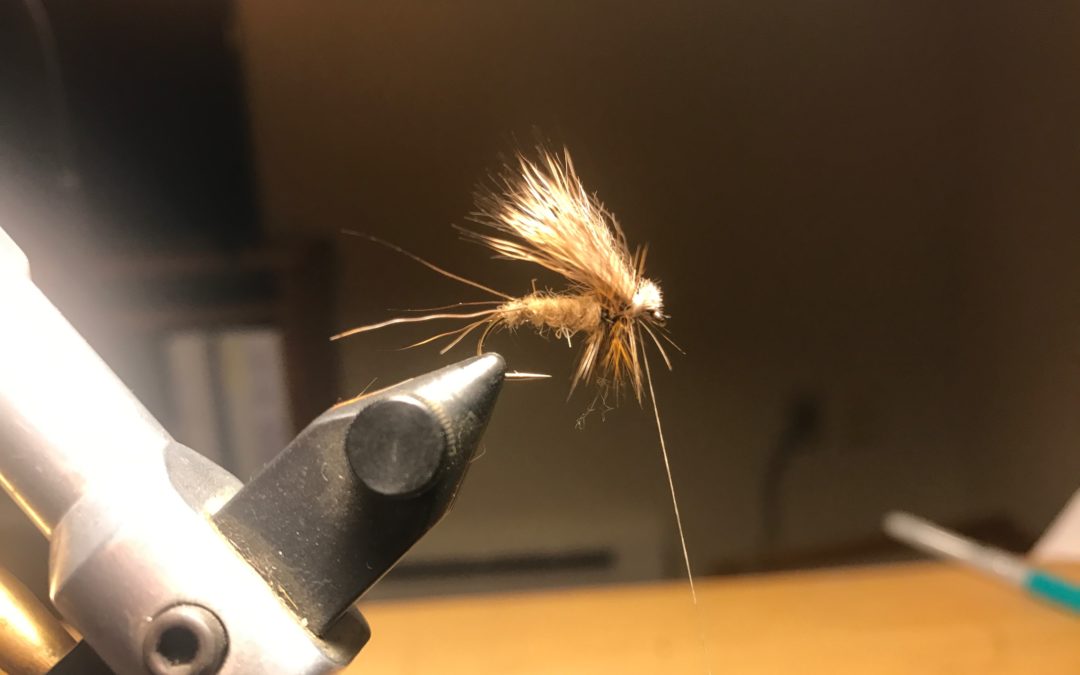 I’m not quite sure who originated this fly, but I saw Rusty tie it a long time ago.  It’s a good pattern for the larger drake and drake-like mayflies: brown drakes, March Browns, even hex.  Not only does it work for the duns, and not only does it float high, but it is a great daytime searching pattern.  It imitates a mayfly, yes…but it approximates a stonefly, or even a large caddis.  It is one of the best twitching drakes out there.  Chuck it along a log, twitch a few times, and let it drift.  Great fun in early June.

Hackle: Keough Grizzly/yellow (I wouldn’t be afraid to use straight grizzly if that’s what you have, or to mix grizzly and brown) 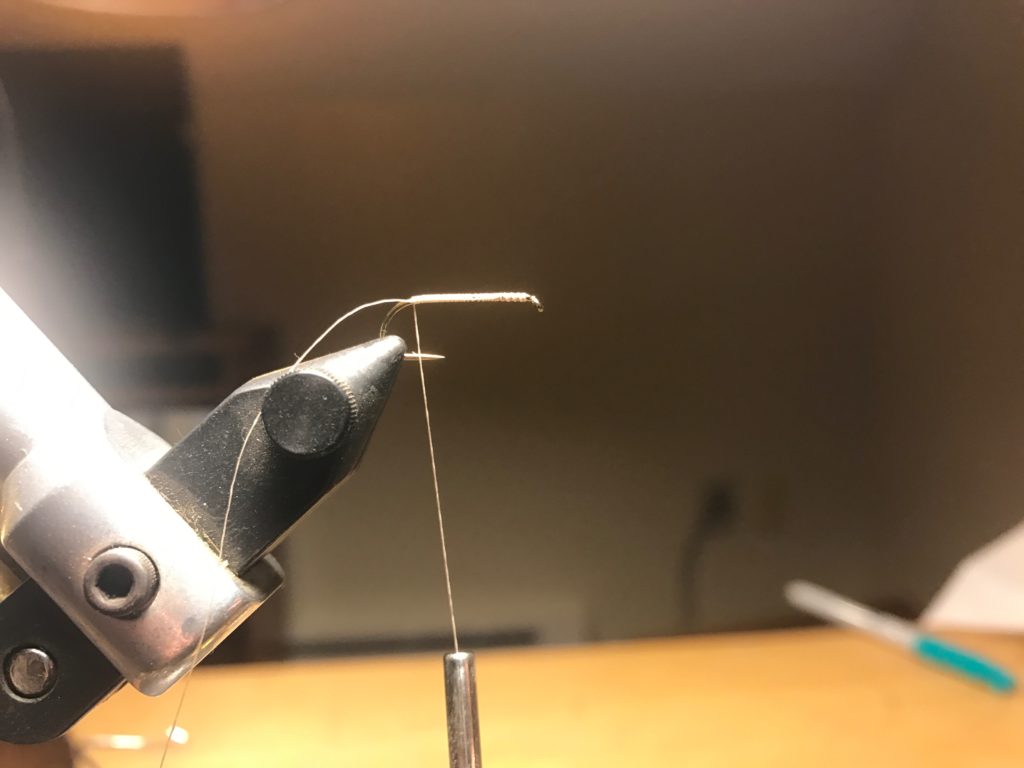 Start thread at the eye and work backwards.  Snip the tag end. 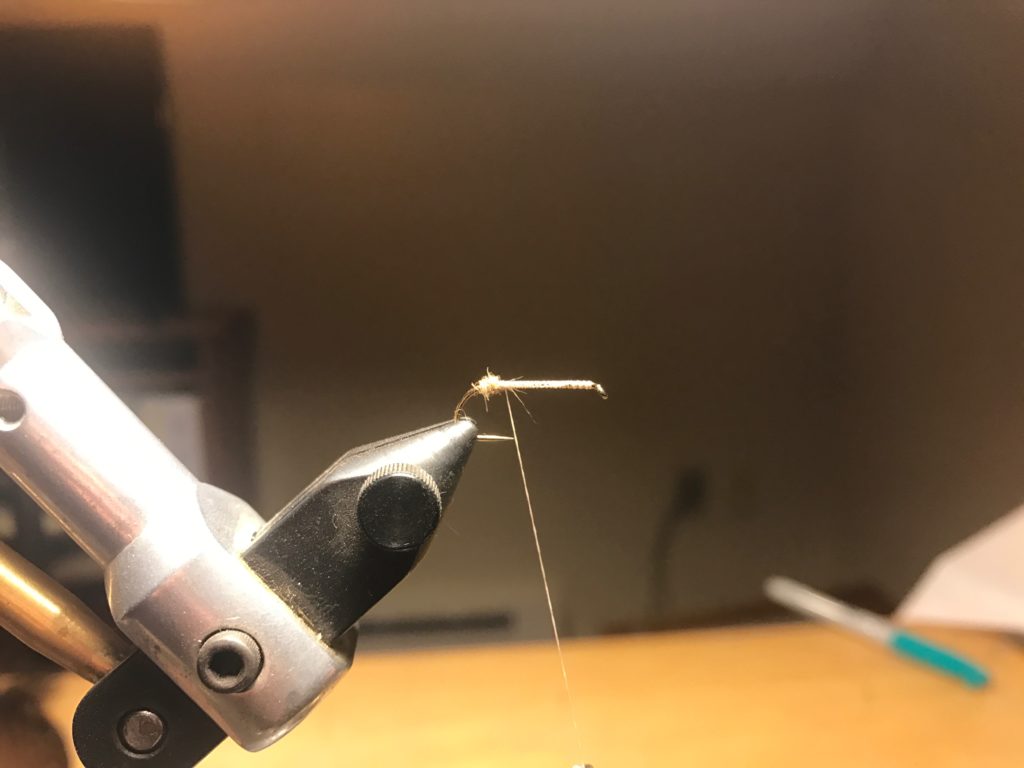 Dub on a small ball of dubbing.  This will be used to split the tails. 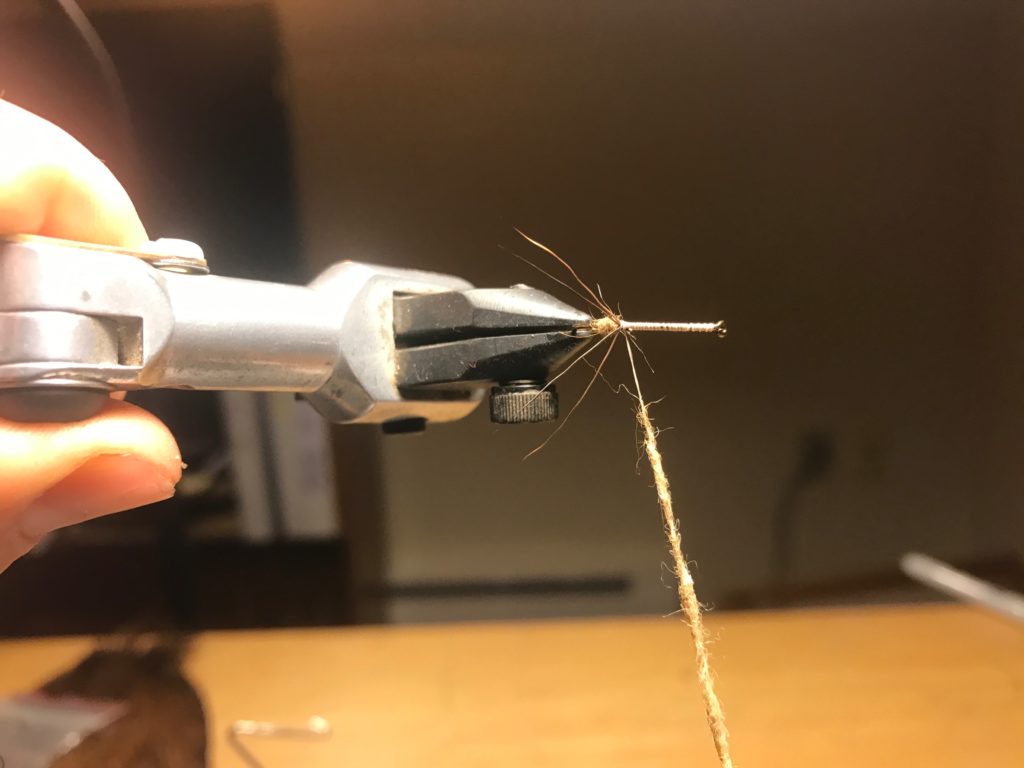 Tie in four moose fibers.  You can either use a hair stacker to get them even or line them up before you attach them.  I attach them in front of the bump, pull them into position, and then wrap to secure them in place.  I then dub my thread liberally.  Beaver dubbing is a nice spiky material, and drakes are big bodied mayflies.  Try to build a body that tapers toward the tail. 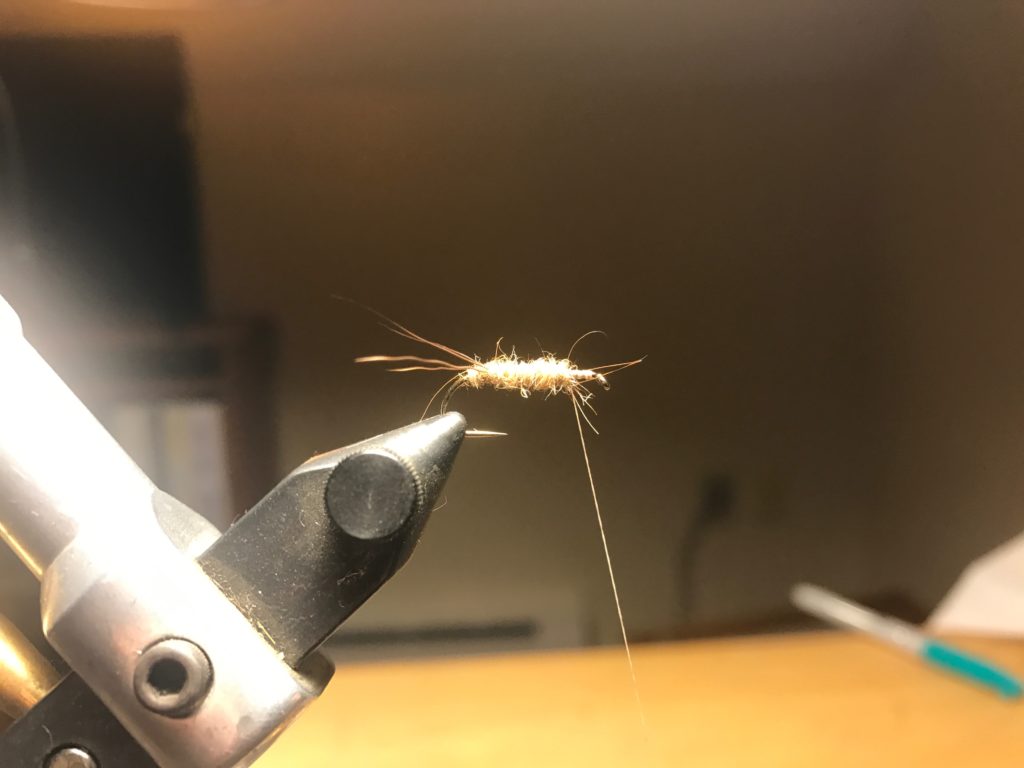 This is about how you want it to look.  The dubbing is loose, but not so loose it won’t hold its shape.  This is the type of fly you want tied “buggy.”  Do not dub all the way to the eye.  This fly has a flared deer hair head and you’ll need to save room for it to flare. 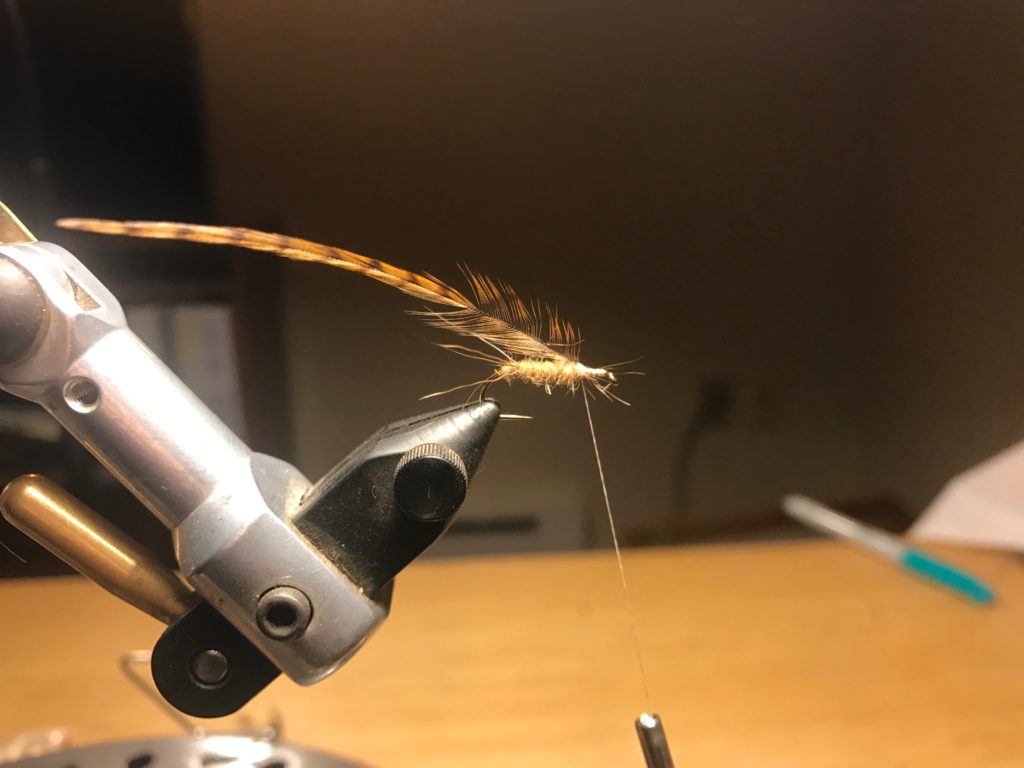 Attach hackle.  While the hackle on this fly is important, you’ll be covering it up.  Wrap it away from you, Catskill style.  The hackle should be one or even two sizes too small for the fly.  Again, leave a small spot behind the eye for the deer hair.  About 1/6th the hook shank.  This usually means about four wraps of hackle. 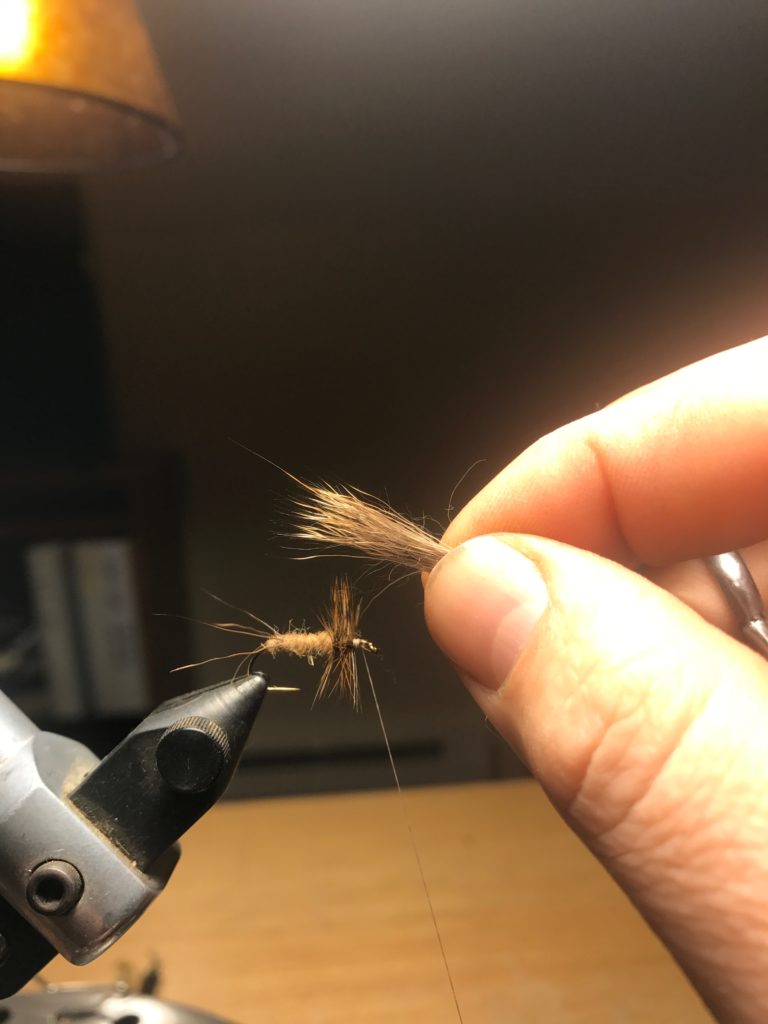 Now that the hackle is done (and there’s still room behind the eye for my deer hair), I measure out the deer.  I want slightly less than I’d use for a full elk-hair caddis.  From here I’ll stack the deer hair, measure it to the length of the body of the fly, and tie it in. 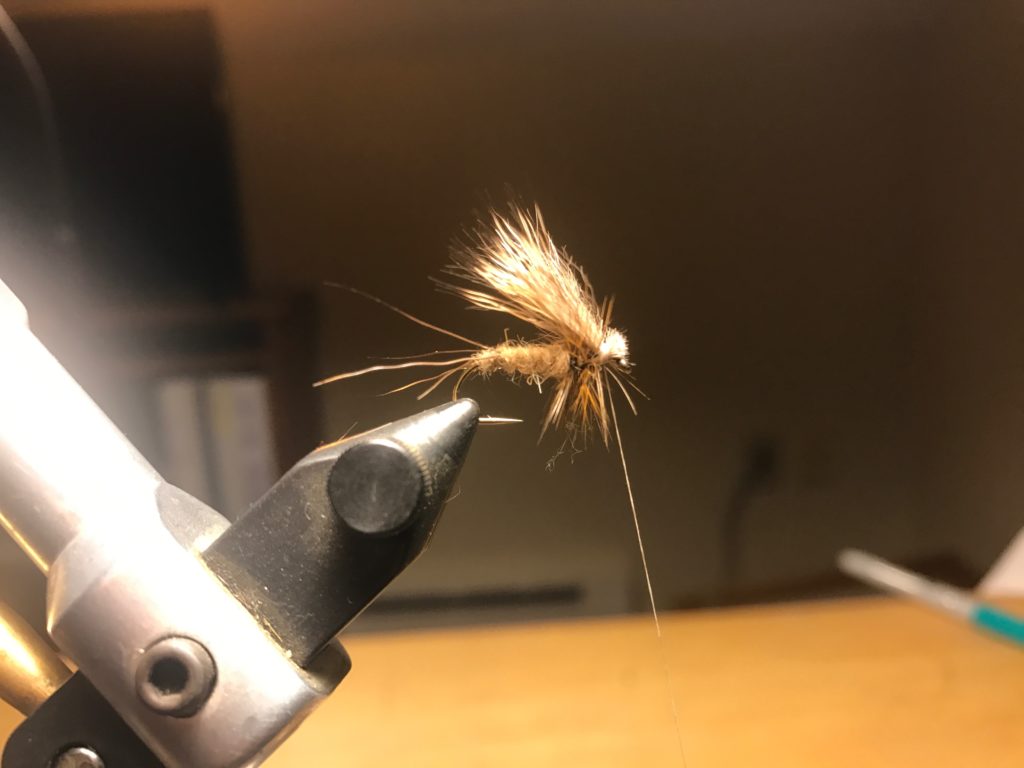 This fly is just about done.  Leave a small head over the hook eye, whip finish under deer hair head, and you only have one (optional) step left.  I like to flip the fly over, spread the hackles to each size, and clip the hackles that are on the underside of the fly.  The idea is to leave an upside down “V” in the hackle so the fly will sit into the surface film.  Now wait six months until June!