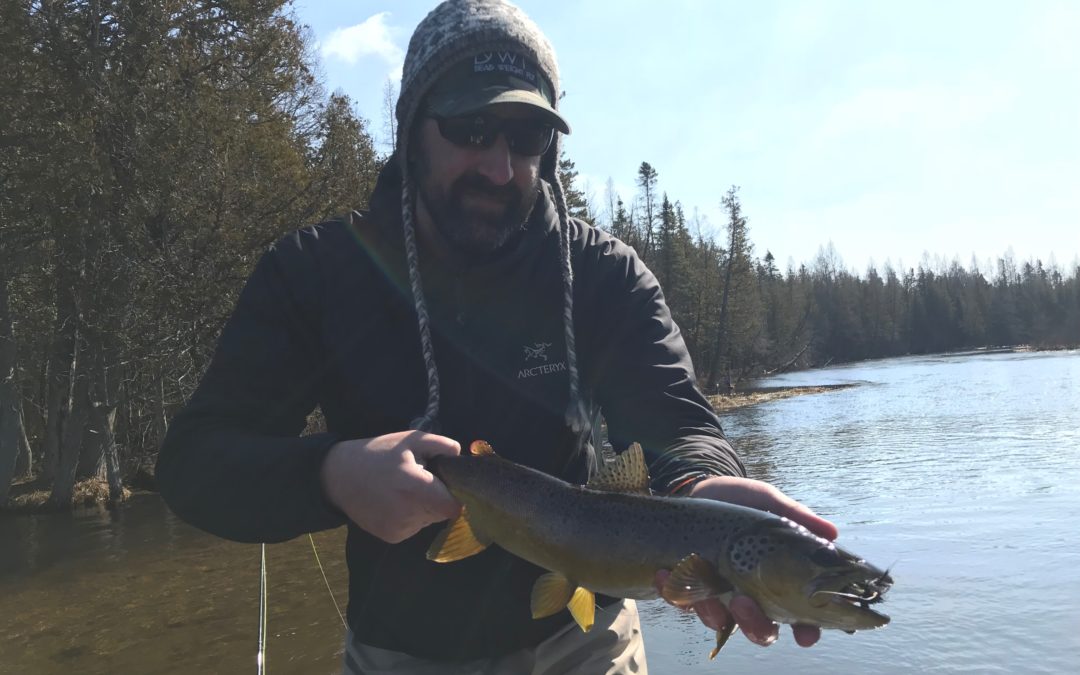 A few conservation notes at the bottom of this report…

As much of the Midwest battles floods, most of the Au Sable and Manistee are normal, or even low, considering the snow is gone and the ground is thawing.  It’s too early to say it’s an early spring.  But the highs all week are going to be near or above 40 degrees, some great big fish have been caught, my friend Mike saw three rises, and it’s fishing time. 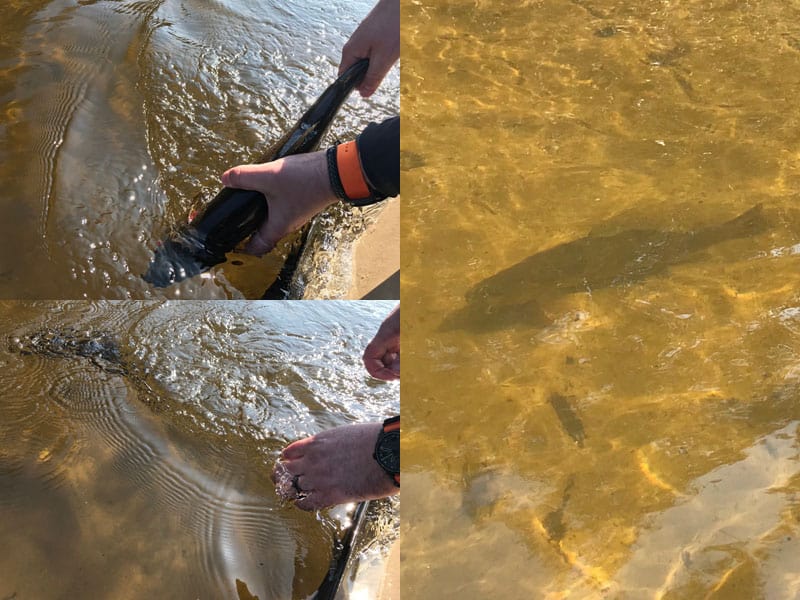 If my streamer rods were hunting dogs, they’d be whimpering.   As it is, my hunting dogs are sleeping because they know.  It’s time to be on the water, to pick a stretch whether on foot or on boat, and to hit the banks, the backwaters, to strip, jig, and otherwise tempt.  With the water being more or less wadeable in a lot of spots, there’s some fun to be had in the relative serenity of March.  The many fishy distractions —  steelhead, bonefish, southern trout — keep the landlocked rivers pretty quiet even when the fishing is pretty good.  And that’s what it has been: pretty good.  March is rarely the time of plenty.  But when you find a trout, they’re usually pretty big. 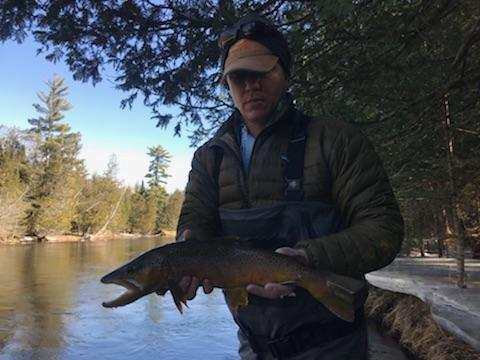 Joe floated with Josh Nethers…and they had a day!

The South Branch is high and the mysterious tannic/clear that it gets in the spring.  I would wade it…in the right stretch, and very carefully.  But for those that do it’s a long way in there, and it’s not a good place to lose your footing in March.  The Manistee is pretty wadeable up high in the special regulations water.  The Au Sable mainstream is in perfect condition, as is the North Branch.

The plan tomorrow is to float the late afternoon.   A little three-hour run through the late afternoon and the change of light, which can be March magic.  I’m not sure why it is, but pre-spawn fish seem to shut off before dinner.  Post-spawn/spring fish will sometimes start feeding at dinner time, and feed right through sunset.  There’s a huge front moving through tomorrow — one that we’re on the northern edge of.  I’m hoping that it’s the right kind of front.  What’s the right kind of front?  Who knows.  I guess it’s best just to go fishing and let hindsight sort it out. 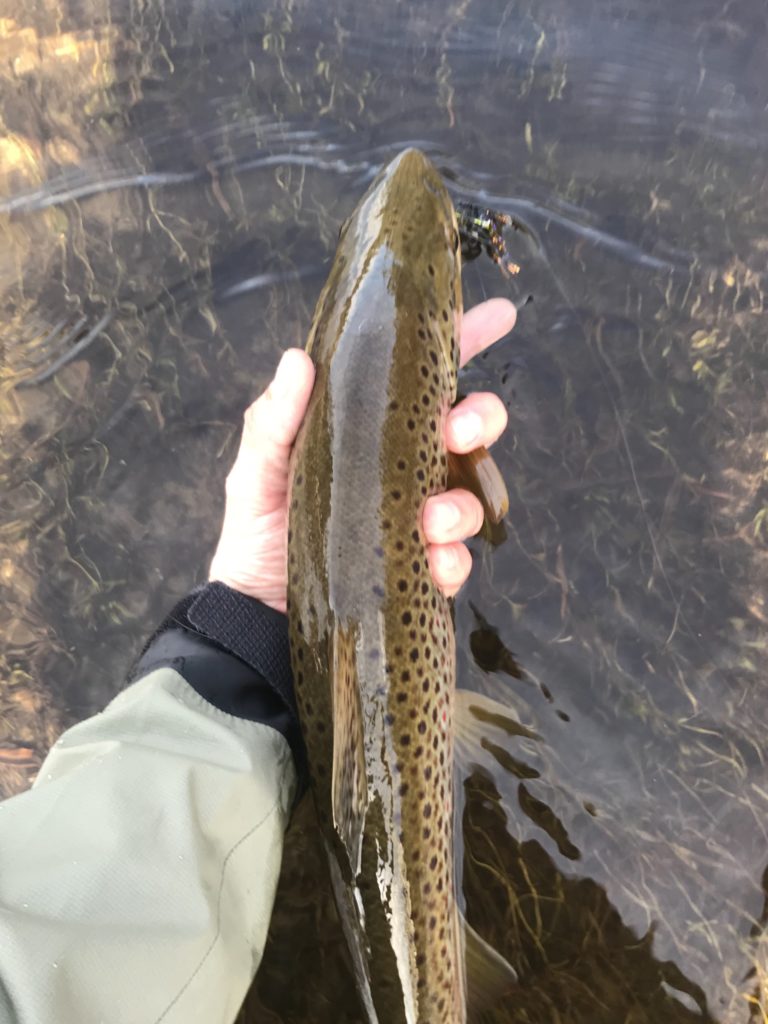 Kevin with a dandy

We’re hosting our last Free Fly Tying Saturday of the season this Saturday, March 3.  We should also have eight rooms open for this weekend, as well as some guides, if you’re ready to try out some March fly-fishing, fly-tying, or both. 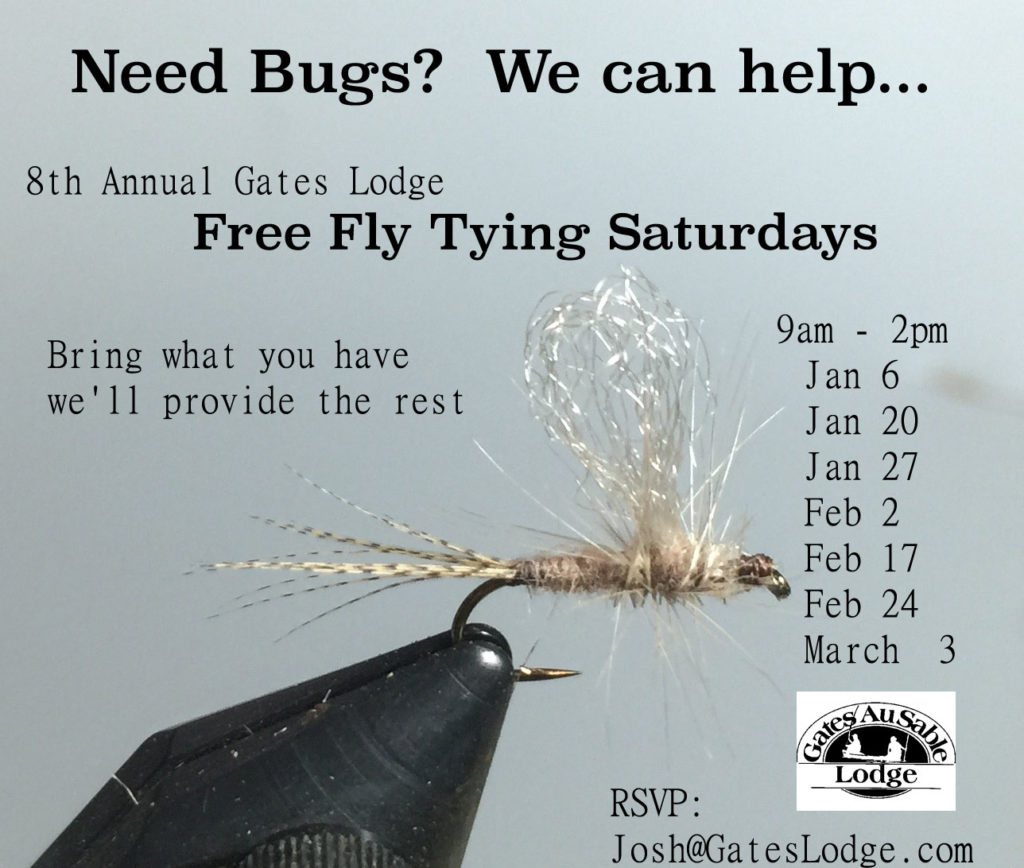 Like many, I just recently learned of a proposed boat launch in the town of Grayling.  Local conservation groups will be formally asking for a proper public comment period as well as a look-see at the site plans.  Until the plans are available, it’s hard to know what to think.  We’re supposed to have comments to the Grayling City Manager by March 2!   Not sure how to comment on something that apparently has no plans(?)   So I guess my comment would be to see the plans, as well as the enforcement strategy for limitations on alcohol, and Super Soakers.

Here is the article:

And here is contact info for the Grayling City Manager, Doug Baum:

Where’d all the water go?

Judging by social media, many have already seen this.  If you haven’t, I apologize that I got to it late.  My understanding is that this bill was a rush job to try to sneak it by Michigan’s many conservationists.  They didn’t make it.   I like the part where it’s up to the DEQ to prove that a water withdrawal will have a negative impact.  Doubt that’ll happen.  I also like the block to FOIA requests.  Pesky water-lovers!  Public opinion works.  Have a drink, and write a letter.  That’s what I’m about to do.

This well-written explanation and call-to-action is from Michigan TU: