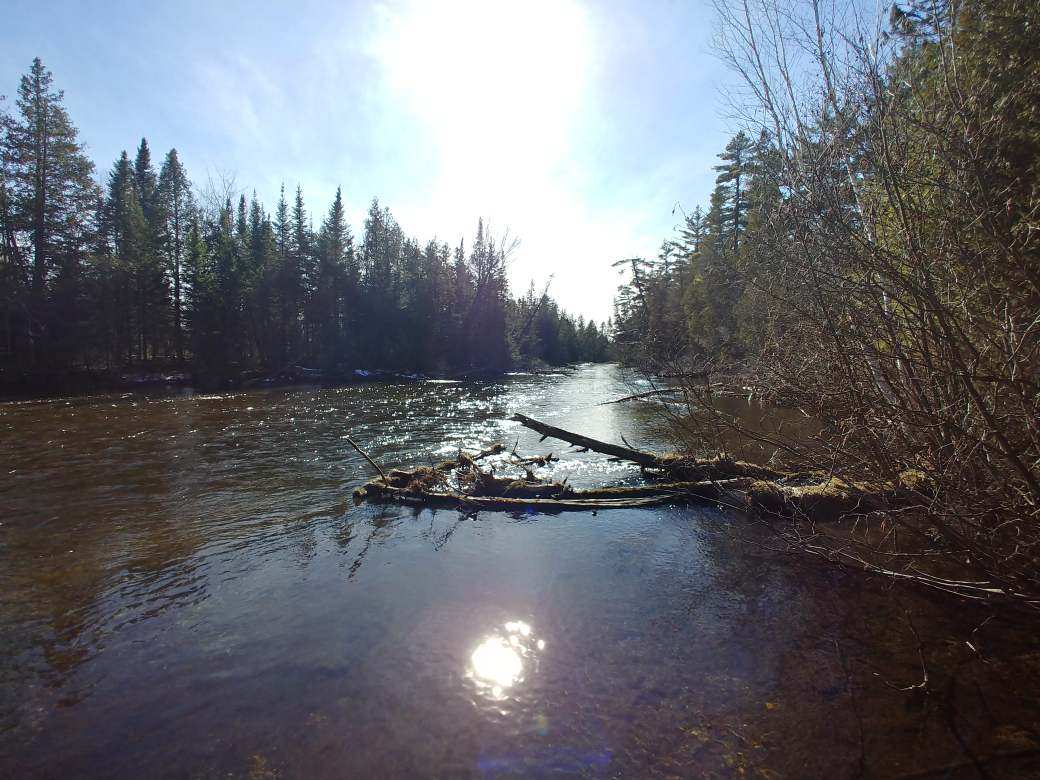 What awesome streamer days.  What awesome fish.  It has been a wild week on the Au Sable. 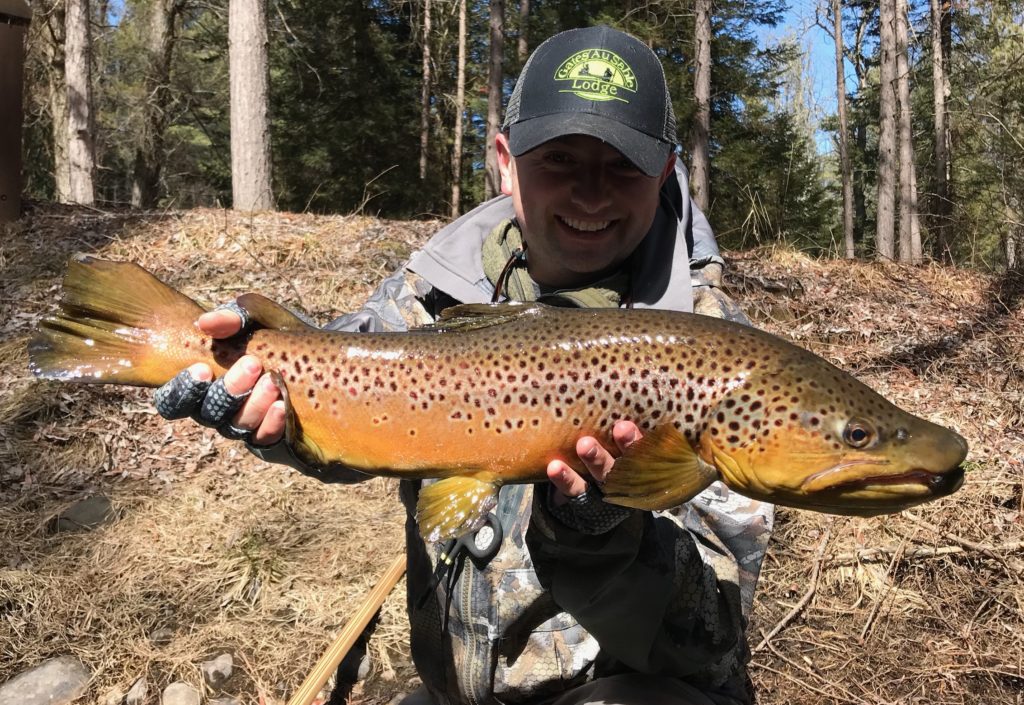 Almost 26″…from the skinny

The rivers are low and clear, the water temperatures have been in the mid-forties, the midges and black stones have been hatching, the trout have been out in the open eating nymphs, or chasing streamers pretty well. 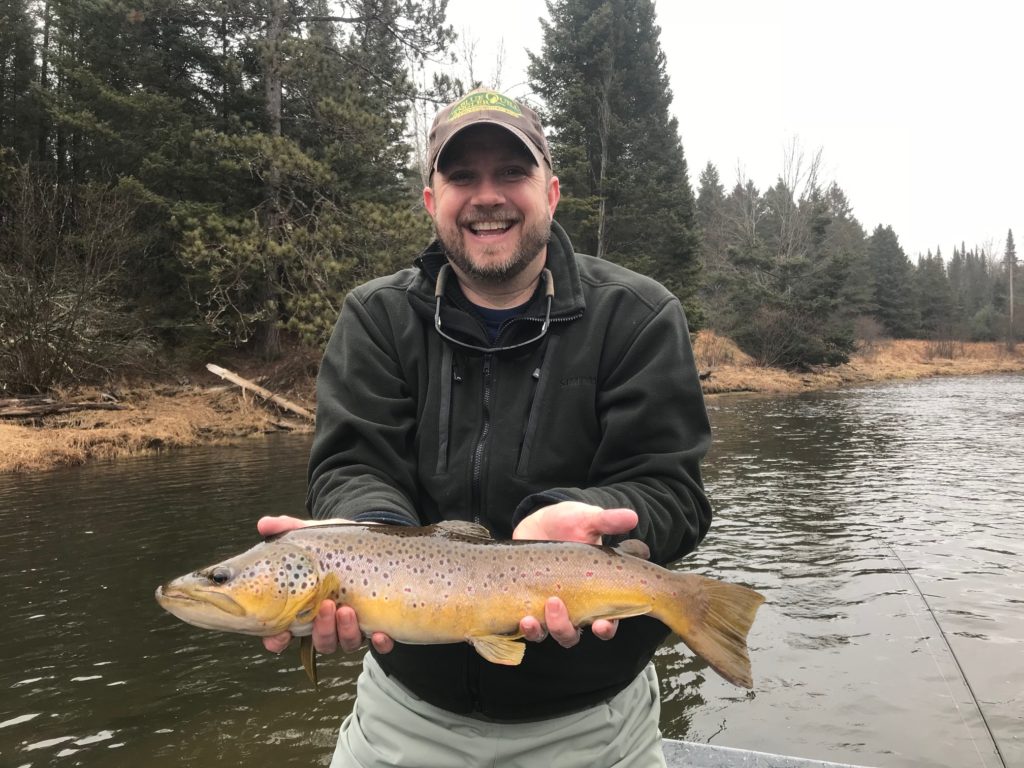 Check out the underbite

The going-to-be is a pretty decisive change in the weather, with snow in the forecast for Saturday, and temperatures in the thirties next week.  This weekend we have nymph classes both Saturday and Sunday (we now have two openings for the class on Sunday, email [email protected] to book).  It’s supposed to snow.  Cancel the class?  Heck no!  We’ll build a fire in the board room, brew up some coffee, and fish in the snow.

If the rivers were high, I would be pretty pessimistic about the next seven days.  But the rivers are low and clear and the food chain is moving.  The drop in water temperatures may hurt for a day or two, and they aren’t as fun as fifty-degree afternoons like today, but I don’t think there’ll be a major slowdown.  If you’re planning on going streamer fishing, don’t be discouraged.  Dress warm, bring some spare layers, and go fishing.

Black is the streamer color of winter, or at least one of the best ones.  But with the warm-up and the changing of the seasons every color has had its day.  Fishing with Kevin two days ago he tied on some awesome streamer – some Euro pattern – that was yellow and orange and a trout obliterated it on the second cast (which invariably is a pox on a fly).  Generally, big streamers are best in the spring, but not all the time.

That same day with Kevin, in the high skies of noontime, switching to a little cone head fly moved the largest trout, a gigantic beast that followed the fly from a tag alder and ate directly downstream of me in about twelve inches of riffle and came unbuttoned.  It was an unfair unbuttoning, if you ask me.

At around 3 or 4 pm the fish really turned on and we caught a handful of nice trout on typical winter-fare: wedgeheads and other flies of that ilk.  We cut open some blockages and never really had a slow moment, or a moment of low confidence.  Near the end of the float we looked through the backwaters for some pike and had an odd occurrence.

Fishing the right bank, Kevin made a long cast into a backwater and began retrieving the fly.  When the fly was about twenty feet from the boat, Kevin made a little grunt.  Not a big-trout-coming grunt.  More like a wtf grunt.  A shadow came over the fly – which was down about two feet – and then a muskrat head popped up like a rise form, staring right at us.

Well, as soon as that muskrat head popped up, as soon as I said, unhelpfully, “muskrat?”, a gigantic pike slammed Kevin’s streamer.  The muskrat disappeared like an apparition.  We screamed with surprise.  The pike whooped us pretty well before we whooped it.  32.5” of fat female pre-spawn pike.

But why?  Was the intersection of streamer, muskrat, and pike related?  Or was it more of a cosmic alignment? 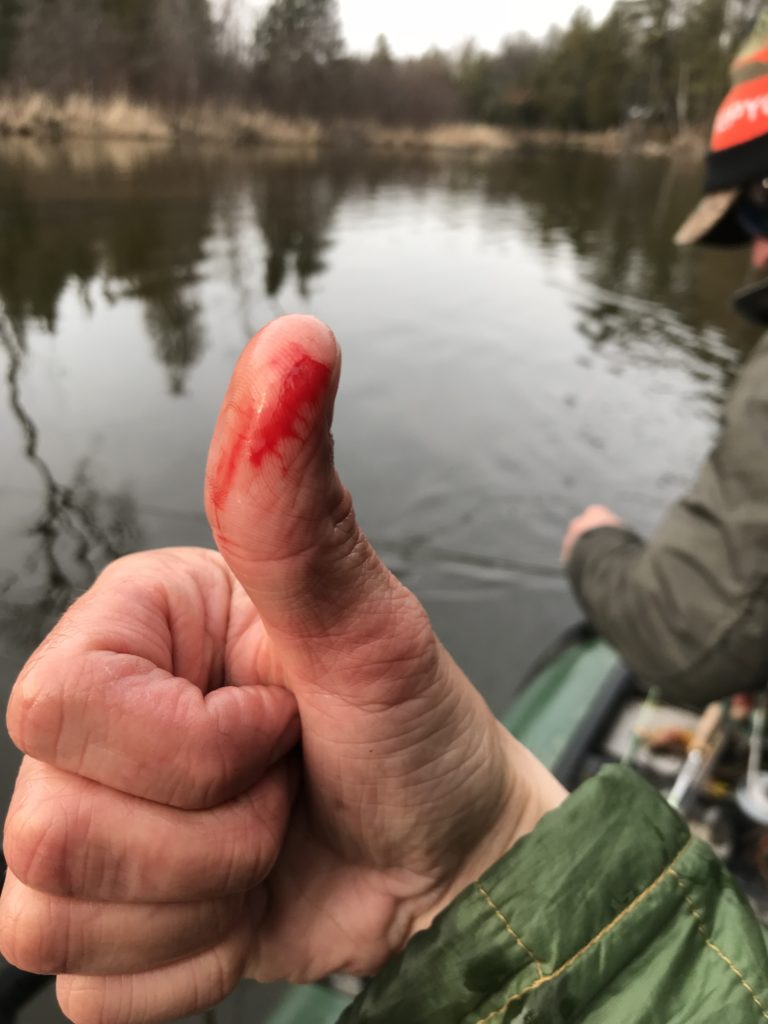 Thumbs up for pike teeth

We’ve had all sorts of fun this week shaking the ice off and going fishing and there’s only more to come.  I’ve got a laundry list of fun to have: some sight fishing on Friday, and some steelhead too I supposed.  I’m sure many reading this have similar lists as well.  It feels good to rev up the season, to shrug at the weather and just go for it.  There are some great days to be had.  Hundreds in fact.  Some will be normal.  Some will be timeless.

We now have two openings for the Sunday, April 1 nymph class

Call or email to book your spot.

This Saturday we’re serving an awesome dinner.  Come watch the snow fall on the river.  We’ll be taking reservations for seatings between 5 pm and 7:30 pm.  We will have a limited but delicious menu along with a full array of drinks.

Fried chicken with mashed potatoes and gravy and sauteed greens $16