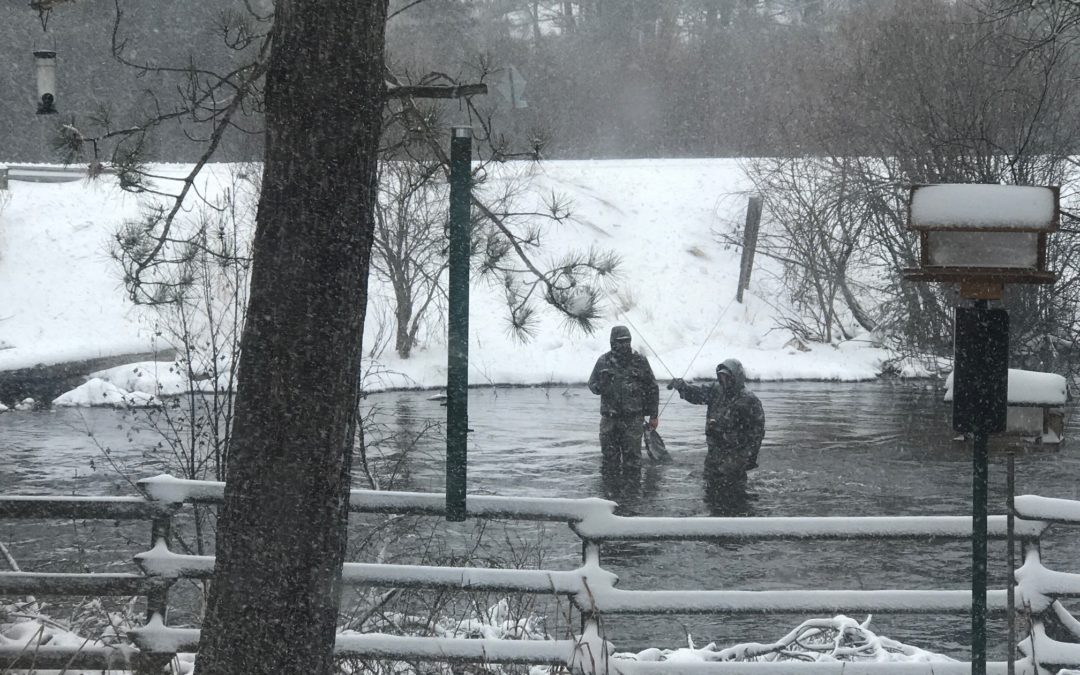 A proper river report is due though it’s a bit early to give one.  Blue wing olives and black stones are hatching on the Holy Waters and North Branch.  These are the size 18s, the ones that help predict the hendricksons.  The problem is that there is a foot of snow on the banks and the forecast is for warmth.  This will make for some very difficult access to the river and to the boat launches this weekend, and the potential for some high water flows.  I don’t think the river is going to flood, at least based on the forecast, but it’ll get high, and the water coming in will be cold.  That said…

There is fishing to be had this weekend.  The warmth will trigger good emergences, and even if the fish are slow to rise, they won’t be slow to feed.  I expect some good streamer days, some excellent nymph days, some beautiful days, some much-needed river therapy days.

We are running car spots when and where we can.  Conners and McMasers are out.  Wakeley is probably out for a few days anyway.  If you’re floating in a boat, you’re going to need a rope.  A long rope.  And a shovel.  But you’ll probably have some fishing.  The trout have been as cooped up as we’ve been.

This weekend Gates Lodge officially opens.  Friday is our first full menu dinner.  All the rooms are open, with 32 new mattresses even!  Very quickly, things are going to go back to normal.  Or even, given the approaching heat wave, maybe better than normal.  It looks like winter, but it feels like spring.

Diary of a Snowstorm

April 12:  Board the windows and cancel the hatches, there’s a big snowstorm a’coming. Or ice storm.  Forecasts fluctuate by the hour.   We ready the shovels.  I buy a new propane heater in case we lose power.  And then Verlac texts me from the river that there are blue wing olives rolling, the nice fat size 18s, and the trout are rising in pods in the low water, and they are catching fish right through the hatch on streamers (blasphemy!).  That’s all it takes for me.  I grab two flies, some floatant, and I’m tearing off toward the river mud flying and vehicle fish-tailing.  There is something different about a hatch.  It’s an event you have to invite yourself to.  I call Katy, tell her I’ll be late.  In this case, I am late…for the hatch.   A lone trout rises once across the river.  A few olives dribble down a bubble line.  It’s over.  But as the song kinda goes, it’s only just begun.

April 14-15 Review:  This is the storm that lived up to the hype.  On Saturday the restaurant filled up for dinner and it was warm inside but outside it was snowing sideways.  Sunday was a whiteout.  Schools were already canceling.  Gaylord got 30″ of snow.  My friend Andrew said he had 38″ up at his farm.  Grayling was spared slightly.  We had a layer of ice, then a whole bunch of wind-dried powder, and then another layer of ice.  Sunday we got like four inches of ice pellets.  An additional six inches arrived Sunday night.  People were getting stuck everywhere.  Everywhere.  But these guys went fishing anyway. 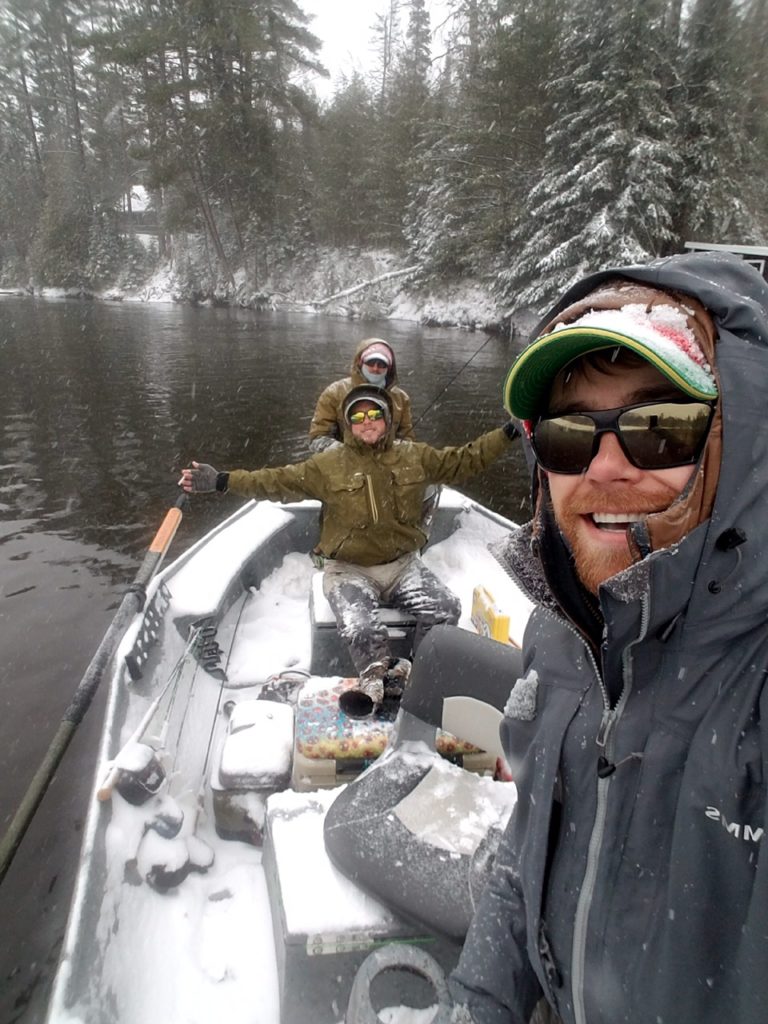 April 16:  Nethers calls me at 4:58 am from the lodge parking lot asking me where I want the snow piled.  He has consumed innumerable cups of coffee.  He says his transmission is smoking.  He says a front-end loader is necessary.  He says he spent all night pulling people out of the ditch.  I was dreaming about something.  Probably trout.

April 18:  Today we dig ourselves out.  The frontend loader arrives and builds a mountain of snow.  Denny is sweating with a snowblower.  I take a few swipes with a shovel.  Verlac and Pels get stuck somewhere trying to go fishing.  I talk another boat out of about three plans that would have ended in stuck vehicles.  The kitchen crew is prepping for their opening night on Friday.  Around 4 pm Denny and I run a car spot.  We walk down to the river and there are olives hatching, and hatching pretty well.  Down at the next landing, a couple guys are taking a boat out and they say they had fish rising in the soft outside corners.  Helmicki texts me: Hooked my first dry fly fish of the year.  Verlac and Pels finally complete their float. 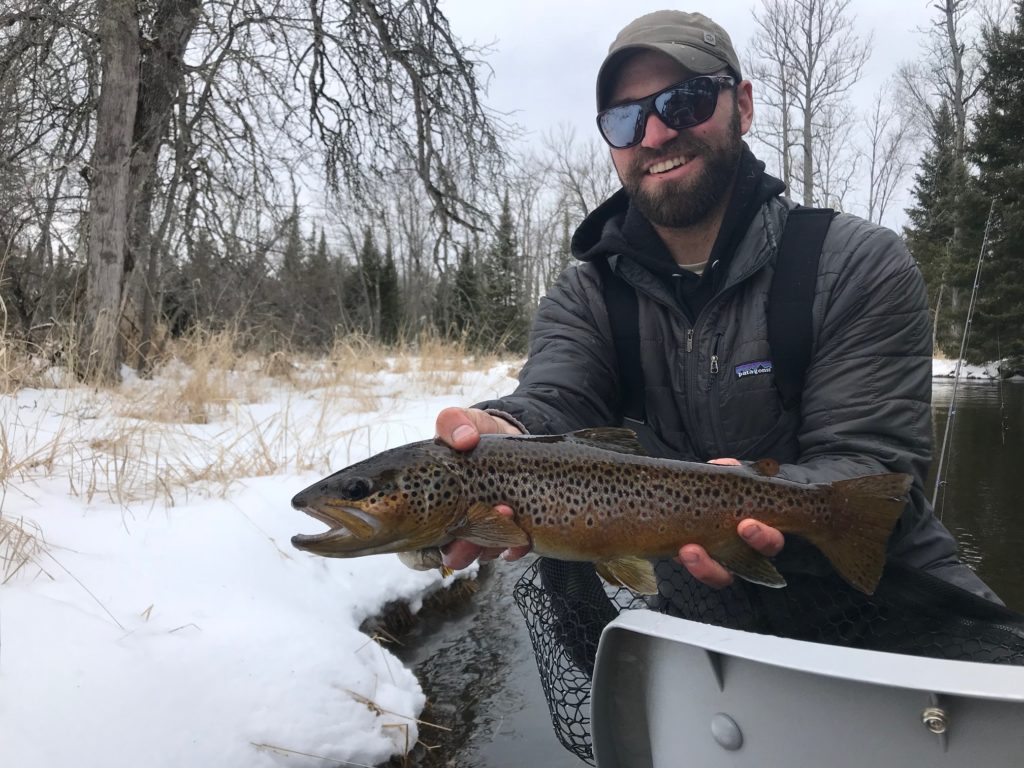 All around us water is dripping. It’s sparkling off roofs.  It’s pooling around the edges of the road.  It’s plopping into the river like fish rises.  Near dark, Katy and I load the kids up and head to the big snow mountain at the lodge for some sledding.  “Is this the last sledding of the year?” they ask.  “Absolutely,” I say.  “You said that last time,” Holden says.  “Yeah, I mean it this time,” I say. 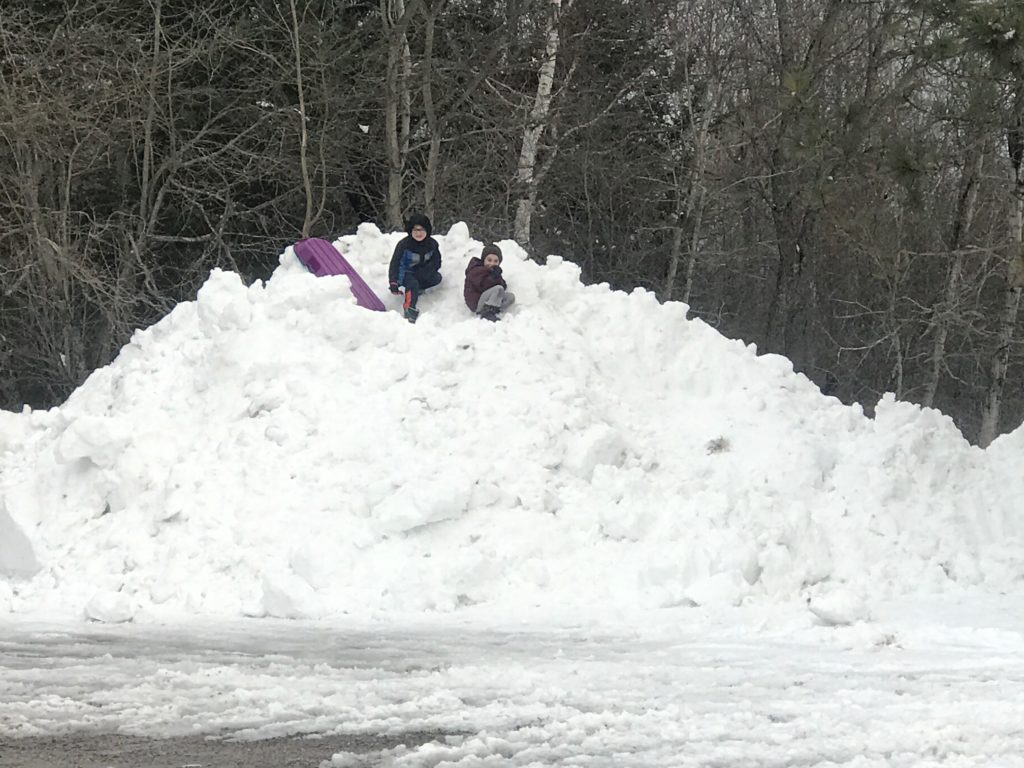 All sorts of fun

We’re soooo ready for the season!  For a link to our ever-expanding list of events, demo days, and schools, click here.

Some aren’t yet on the list, but they’re coming right up:

April 28 (Opening Day): Rio Line Test Cast — Rio representative Ben Hunting will be at the shop with dozens of reels rigged with dozens of lines so you can find the right line for your fly rod.  People completely undervalue the importance of the fly line.  It’s a new season, time for a new line!

May 12: Hardy Day — Explore the world of Hardy.  We carry a huge selection of Hardy reels and enjoy selling the new ones, and buying, selling and trading for the old ones.  John Shaner will be on hand to answer as many questions as you can throw at him.

May 19: Phil Cook (Scott Fly Rods, Ross and Abel Reels, Airflo Fly Lines, Echo Rods): Few rod companies are doing as much as Scott, and few reel companies are upping their game like Ross.  The new Scott G series, with it’s applicable rod lengths and weights (what better June South Branch rod is there than a 7’7″ 5 weight?) Come demo a bunch, and hang out with Phil — a fishy dude in all the right ways, and a born and bred Au Sable angler — and enjoy one of the best weekends of the year.