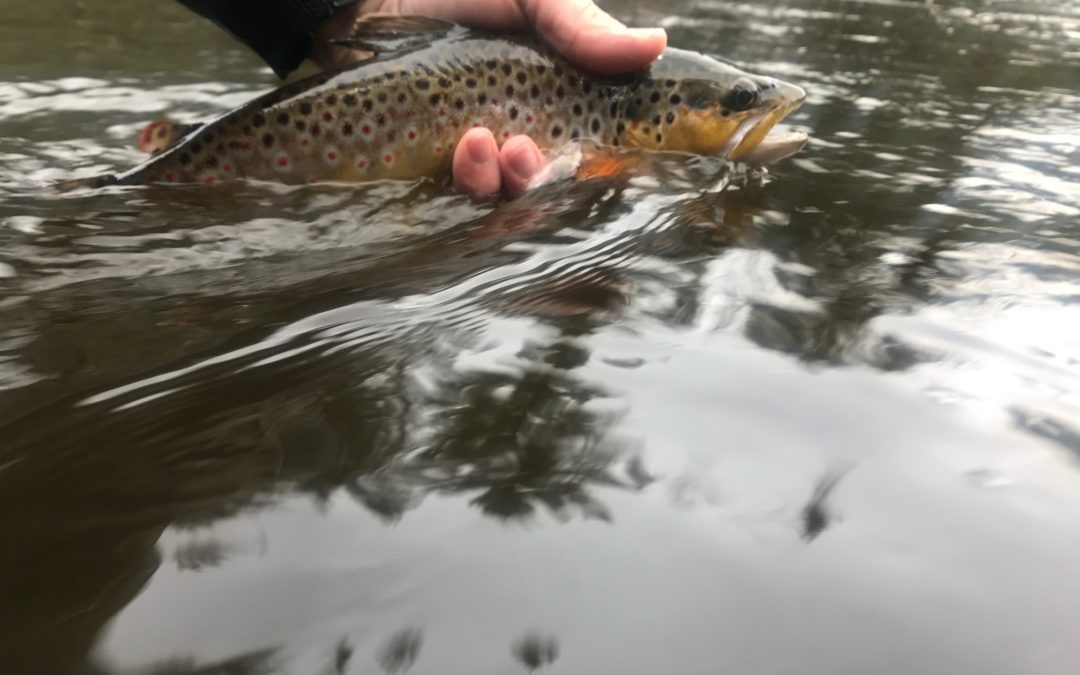 Opening Day: that time of year where water levels, water temperatures, and bug hatches come to a handshake agreement to break a lot of hearts, and mend a few others. 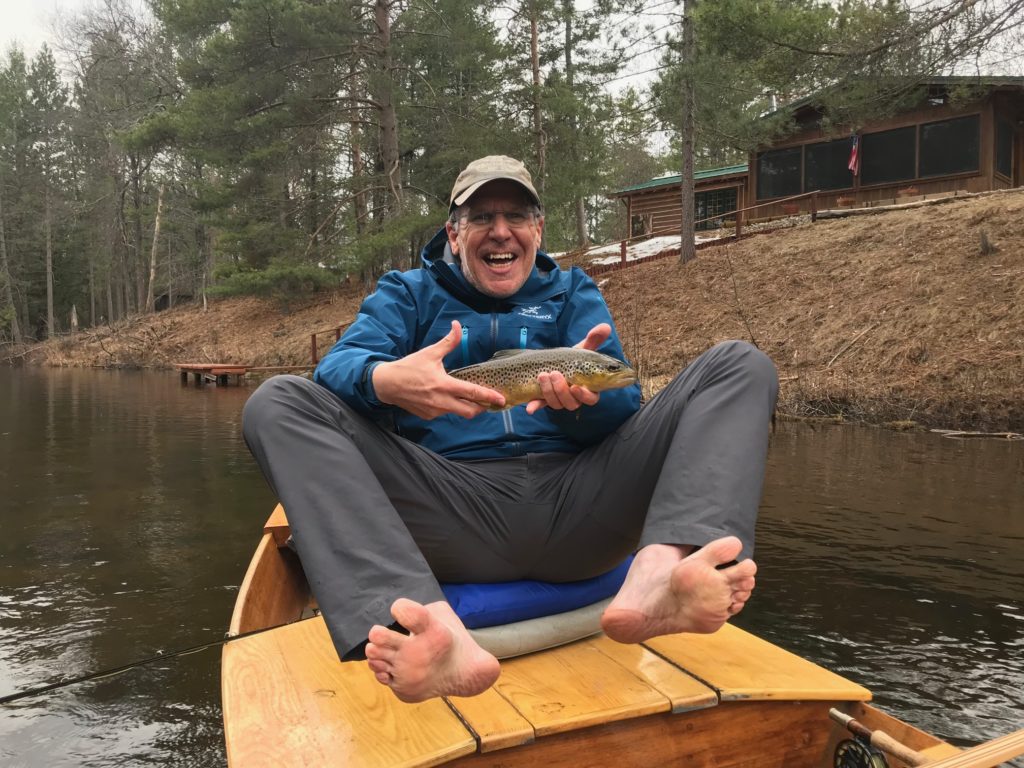 No shoes, still some service

It’s a day that seems perfectly timed.  I mean, if Opening Day were April 1 or May 15, it’d be all wrong.  No pleasant drama.  It has to be now.  When anything can happen.

The scoop is this.  There are very spotty hendricksons in a very few areas of river.  There are strong blue wing olives across all three branches of the Au Sable as well as the Manistee.  The South Branch is flooded, and requires intense navigation in the middle of the Mason Tract.  The Holy Waters are high and stained but not unclear and the trout are rising but wading is, at best, a chore.  The North Branch is high but in good shape in the upper river.  The Manistee is high but there have been rising fish there.  That’s the current Wednesday night situation.

The river appears to have crested down by Luzerne, which means the Main and the North Branch are likely on the drop, or will be shortly.  This bodes well for the weekend.  As does the 60-degree temperature forecast for tomorrow, which should nudge those hendricksons along.  This weekend’s cooler temperatures should mean good afternoon bugs as well as some great streamer and nymph fishing opportunities.  I’ve been doing best with hendrickson nymphs fished in tandem with heavier flies to help get the rig down quickly.  There is fishing — and some dry fly fishing — to be had in the upper river. 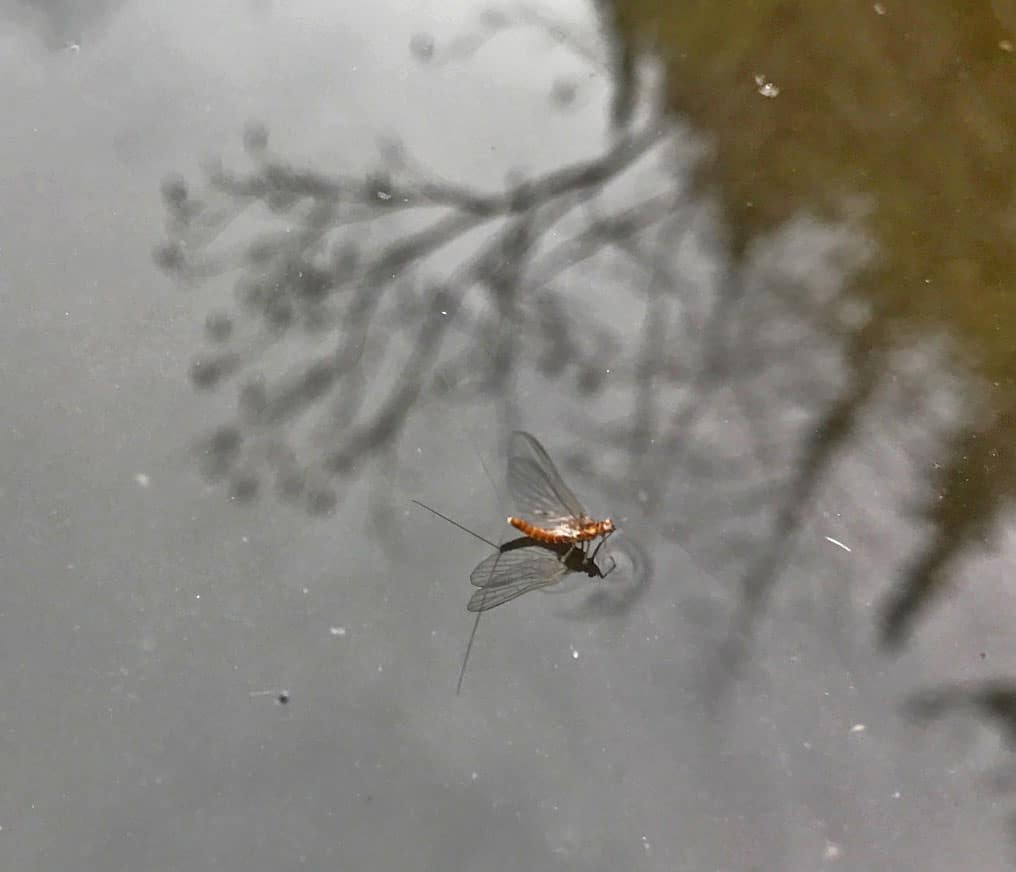 For the lower river, and for those in boats, the game is simple.  Fish a big streamer on a big sinking line and fish the inside bends, the shallow outside bends, anywhere a creek flows in, and keep the fly moving.  There have been some incredible streamer days this week… 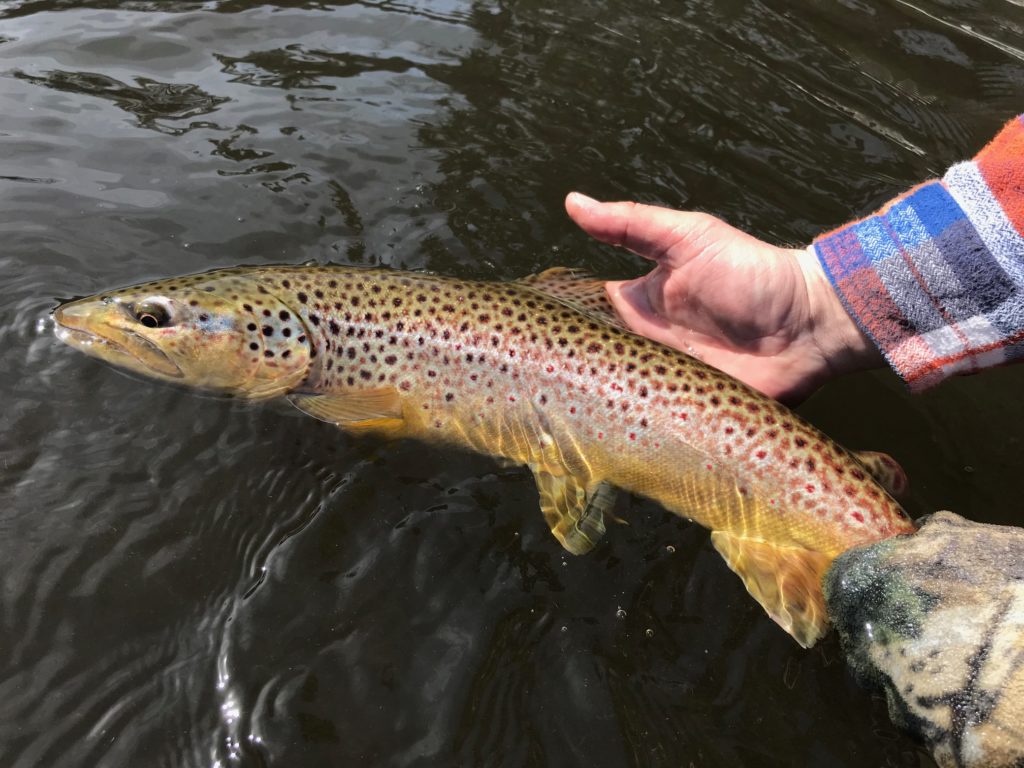 Guide Josh Nethers about to release a spectacular trout

…And some slow ones.  But yesterday wasn’t one of the slow ones.  Pels said he and his client had some fish eat streamers on the surface: big deer-hair streamers that hadn’t yet sunk!  Would those trout have crushed a mouse fly?  Man, wouldn’t that have been cool?

It feels good to cast a dry fly rod after half a year of heaving streamers.  I had a nice day of it on Tuesday. 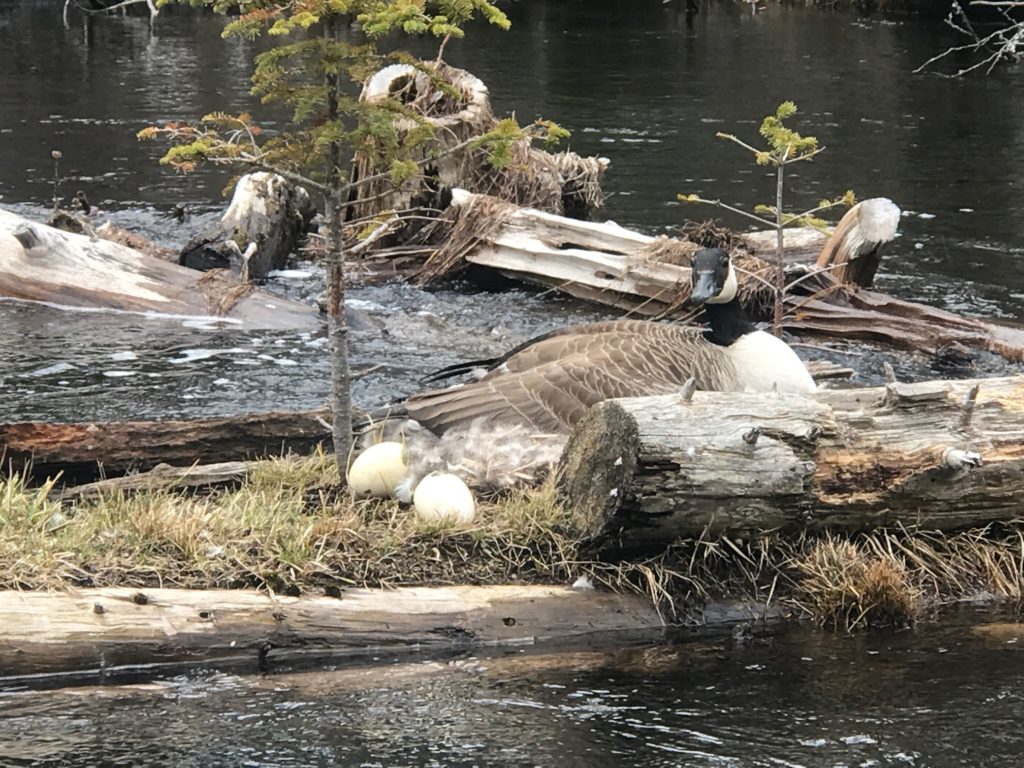 Nothing says “stay the f away” quite like this goose.

It started out slow, like most good days.  I tried to nymph around some bubble lines, some drop-offs.  I suffered a pretty dandy tangle.  I re-rigged, experimented.  Some olive spinners fluttered by.  It was one of those days, you know?  High fifties.  Cloudy.  Barely a drizzle.  It couldn’t be slow forever.  Or could it?  The trout universe is ultimately pretty fair, but it can seem unjust when viewed through a small lens.  The river was high.  Stained.  It was never so deep that I feared for my waders.  It was swift enough in spots to slide me along the rocks I meant to stand on.

I went a long way without seeing a trout.  And then, well, I saw a bunch of them.

It began with a half-hearted nymph “drift” through an almost stagnant backwater that ended in a leaping brown that was every bit of sixteen inches that threw the nymph from his mouth and directly at my face.  This second massive tangle necessitated a small bead-head streamer, a simpler game.  And then it was incredible.  It wasn’t a trout every cast, but then again, I was throwing a lot of casts.  But it was a trout in every good spot.  And a good spot, at least today, was in the “second river”, the one that forms in high water along the otherwise shallow, tangled banks of the Au Sable.

My streamer fishing was brought to an end by this: 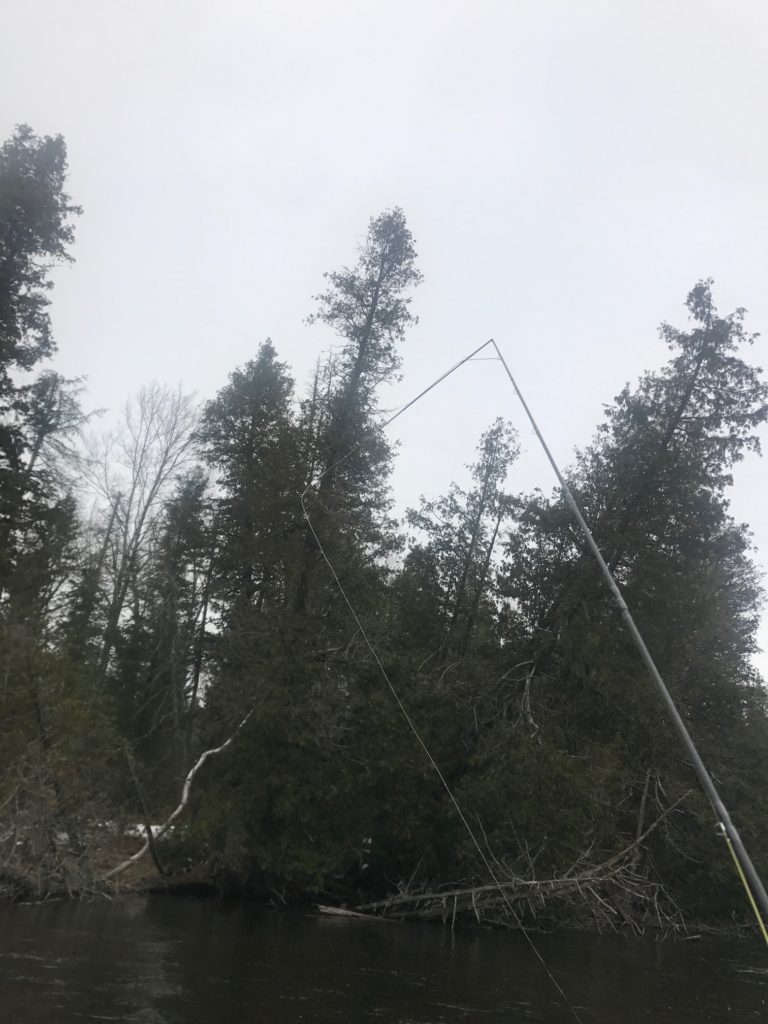 I boldly phoned a friend, and requested the delivery of a spare.  It was an awkward request, but — I think — understandable.  I couldn’t just quit.  Right?  John met me at a dock and we sat and watched the first few olive hatch, and the first few trout rise.

I waded down and the olives were sparse but there were enough of them.  The big slick was empty but I thought I saw something downstream on the left…

And there it was: a rising trout working a bubble line beside one of the remaining snowy banks.  The hatching olives bounced, fluttered, were blown by the wind.  This trout wanted only the still ones.  I tried 5x first because it’s spring, and the water is dirty.  Nope, this trout wanted 6x.  And it didn’t want the comparadun.  It wanted the cripple, and so the cripple is what it got.  The take was surprising, but then the first few dry fly rises are. 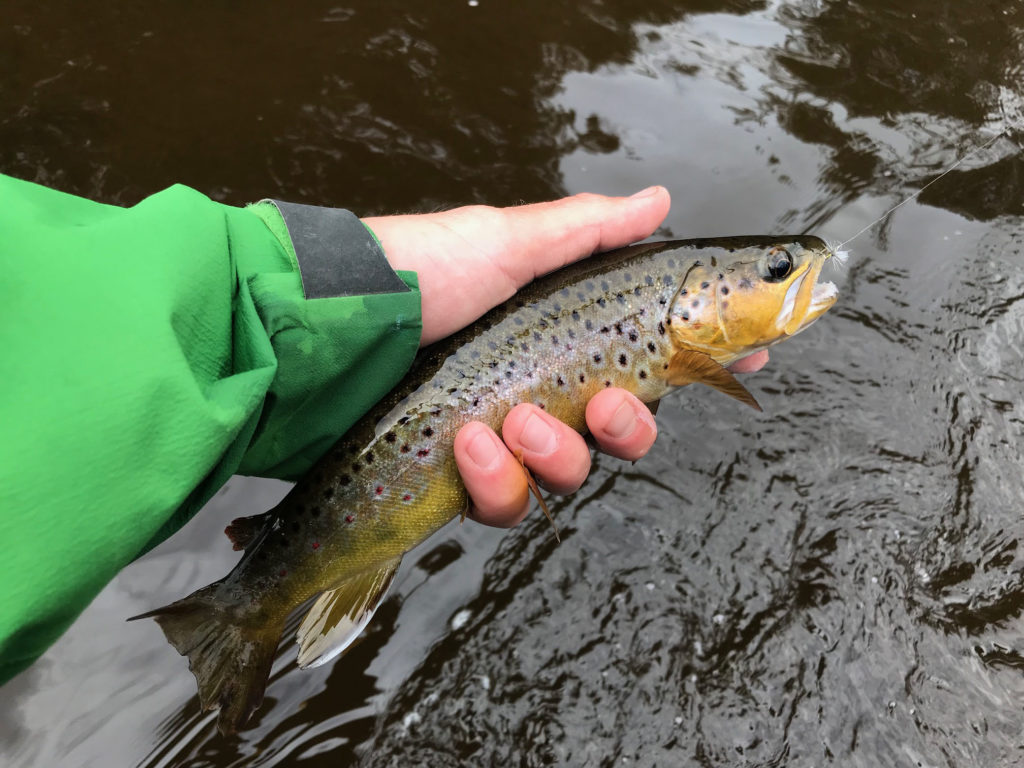 Matt with a nice afternoon brown from today

The next fish was one of several, a pod working a tiny bubble line about fifty feet from the main channel in what is normally a nothing-muck flat.  I believe the were rising in water that is normally dry land.  They were sweet fish in difficult spots that were completely foolish.  One brook trout — a nice one over ten inches — was nothing but a black nose poking up through a small mat of foam.

The last trout of the day was on the other side of the river along a parallel log. It took two fly changes to fool it and the way it ate made me think I hadn’t fooled it completely, and that maybe it was just hungry enough to not care.   It leapt nearly into the cedar tree above it.  It took drag!  No winter gator-rolling for this one.  It was cold and firm in the hand, like a piece of spring river.

On trout: there are a lot of them this year.  Specifically, there are a lot of 10 to 14- inch brown trout in the river system, particularly in the upper river.  This is a bounce back, I supposed, from the few years previous when there weren’t.  This is a strong age class of fish that are just coming into spawning age.  It’s important for all of us to be as careful as possible with them.  I’ve been thinking about this, and trying to practice being more careful.   Catch and release works…when fish are caught and released well.  It works more experientially than it does biologically, though I believe 100% (and think I have the data to prove it) that it improves the health of a heavily-fished river in both ways.  The fact is, you can’t kill a trout in April and catch it again in May.  And no counterargument in the world can alter the truth of that previous sentence.  One of my best trout all winter was this one: 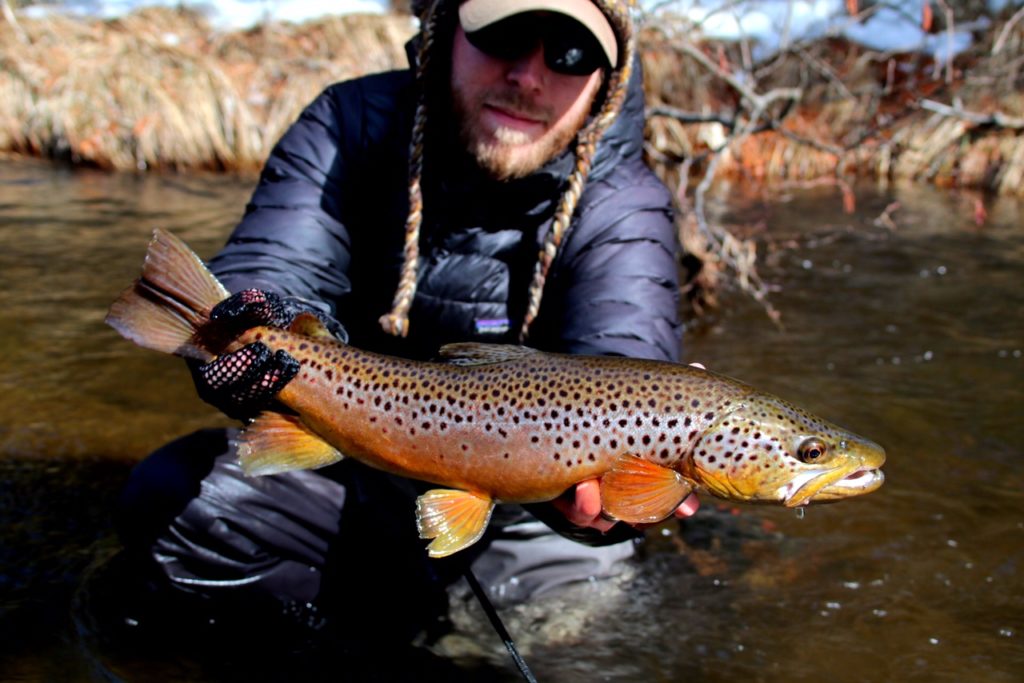 Erich with a beauty

Except that’s not me holding it.  I caught the same trout a month earlier. I texted Erich’s friend Rob about this and he said: awesome.  It is indeed.

I got a chance to fish around a bit this winter.  I don’t travel well or often.  Don’t see the point in leaving up here.  But I fished the South Holston.  I fished the Smokies.  The rivers of Northern Michigan are something different.  They are few, but they are magic.  And if you’ve forgotten, as we all sometimes do, they’ll be there to remind you, soon enough.

Have a memorable 2018 trout season…

Two great events this weekend, among many:

Bob Linsenman Book Signing:  Water Songs is a superb collection of short stories and the author — and Au Sable guru — Bob Linsenman will be at the fly shop from 9 am – 1 pm signing them.  $40 for a signed copy.  100% to Pere Marquette Trout Unlimited.  Cash or check is preferred.  While supplies last!

Demo Days: Rio Line Test Cast: We all need new fly lines in the spring, but the line you choose can really impact the action of your fly rod.  Here is the best opportunity to find the perfect line.  Bring your fly rod to Gates Lodge on the Opening Day of trout season, April 28, anytime after 9 am, and you’ll have the opportunity to sample just a ton of Rio fly lines.  We’ll have giveaways and deals to help ease the sting of some new string.