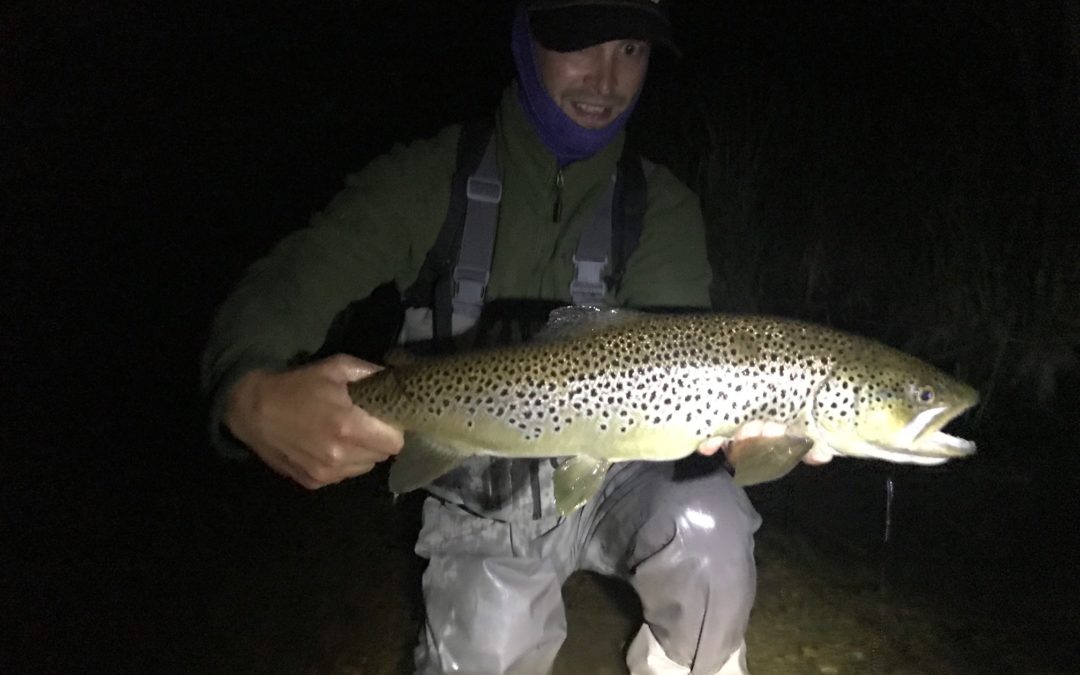 The annual infestation that is the brown drake has begun on all three branches of the Au Sable.  Brown drakes are like a rogue wave that leaves behind it a bunch of bedraggled, sleepy anglers, some broken rods, ripped waders, and a lot of dirty vehicles.  For me it began last night, after a great evening of brown bugging (which is what we call the nightly spinner fall of Borcher’s Drakes, March Browns, and assorted other brown spinners), when we stopped at the South Branch and saw brown drakes, and despite my promises to the contrary, ended up in waders at 12:30 am.

And then this morning, as I unlocked the front door of the fly shop, this: 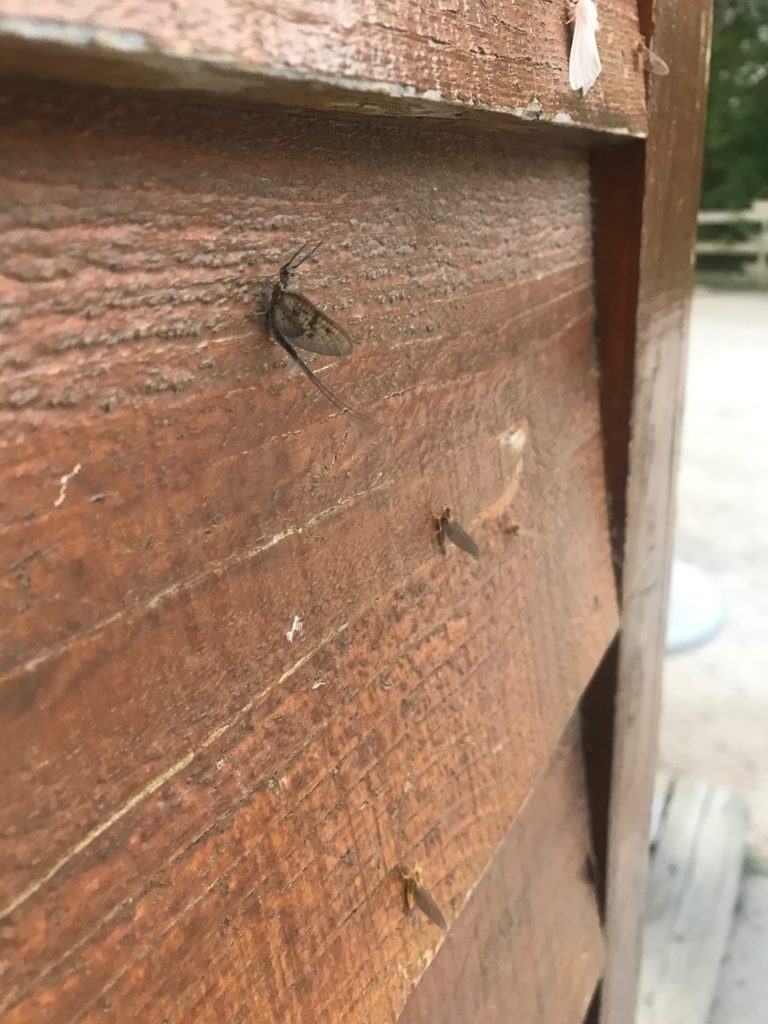 So they’re on the mainstream as well.

What this means is that one of the most exciting weeks of the entire year is underway.  What it also means is that due to this sudden warm up (it’s 90 degrees today) and a late, snowy spring, that my favorite two weeks of the year — that is, the weeks between the last of the hendrickson spinners and the first of the brown drakes — was shortened by almost exactly one week.  Not that the drakes are early, but the hendricksons were just so late.  What to do?  Cut off the 5x.  Shorten the leader.  Grab the bug spray, the spare flashlight, one coffee for the ride and one beer for the river, and go drake fishing.  No problem.

It’s been a strange week, with some slow, hot days, and some fantastic evenings. 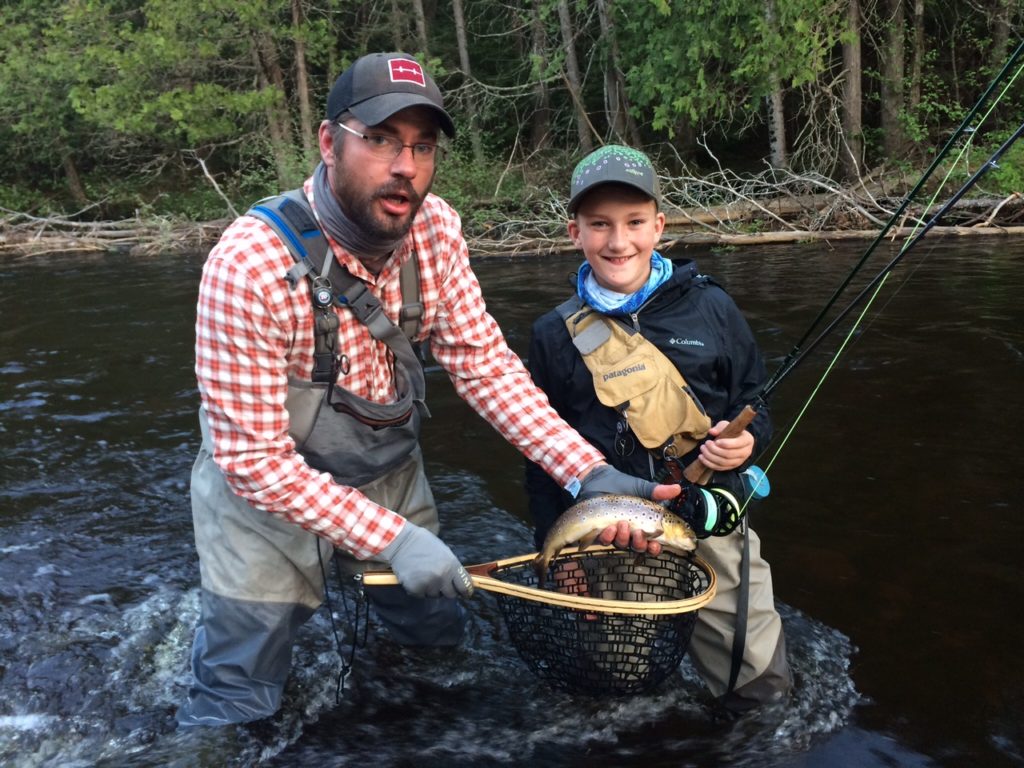 Noah and dad with a daytime dandy

The Main, South and Manistee are fishing very well (see below re: North Branch), if a bit on the warm side.  In (somewhat) order of importance for this week: brown drakes, sulphurs, borcher’s drakes, yellow stones, thrashers, popcorn caddis…and many more.  The Isonychia should show up any day now, further complicating — and bettering — the fishing.  The forecast is for more moderate temperatures with some rain.  Don’t be surprised to see brown drakes hatching all day if it cools off.  As it is, even without a hatch, prospecting with a brown drake, purple patriot, or other large attractor can be especially effective.  Alex and I fished the bubble lines last night and moved some very nice fish just casting blind. 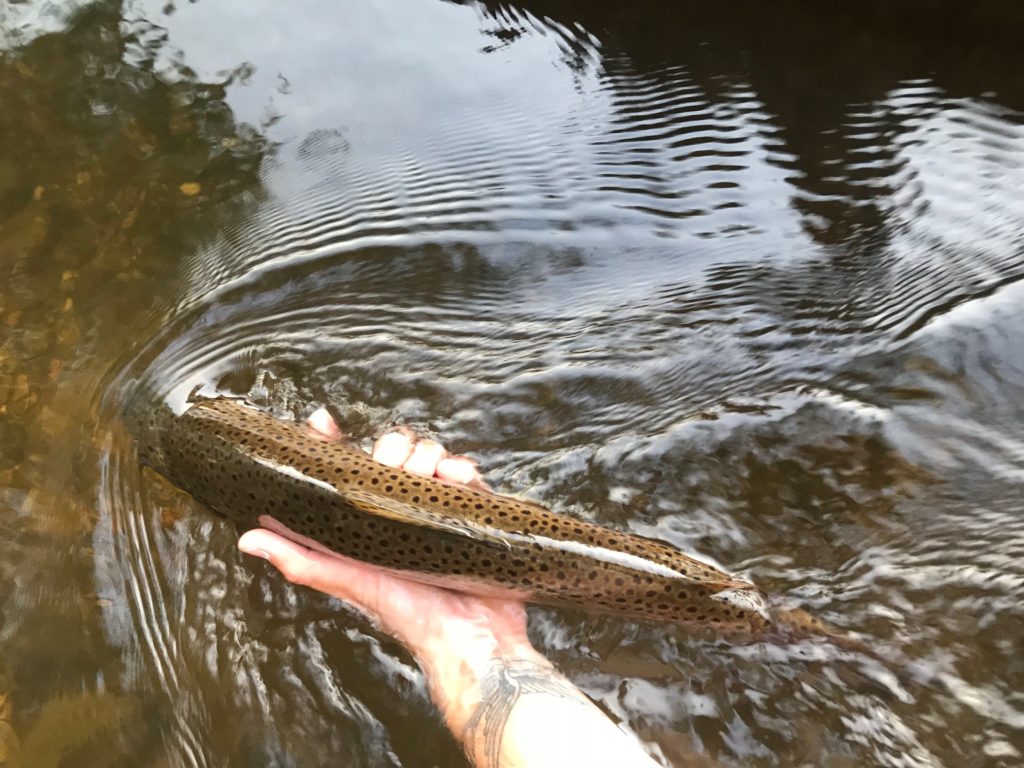 June is a magic month, and it’s on…never mind the calendar.  Warm muggy morning: go fishing.  Calm after a midnight storm: go fishing.  Too hot in the afternoon: go fishing.  The real lesson to the brown drake is that they can happen at anytime, expected or not, and if that drives you crazy then good, it should.  That’s why we love them. 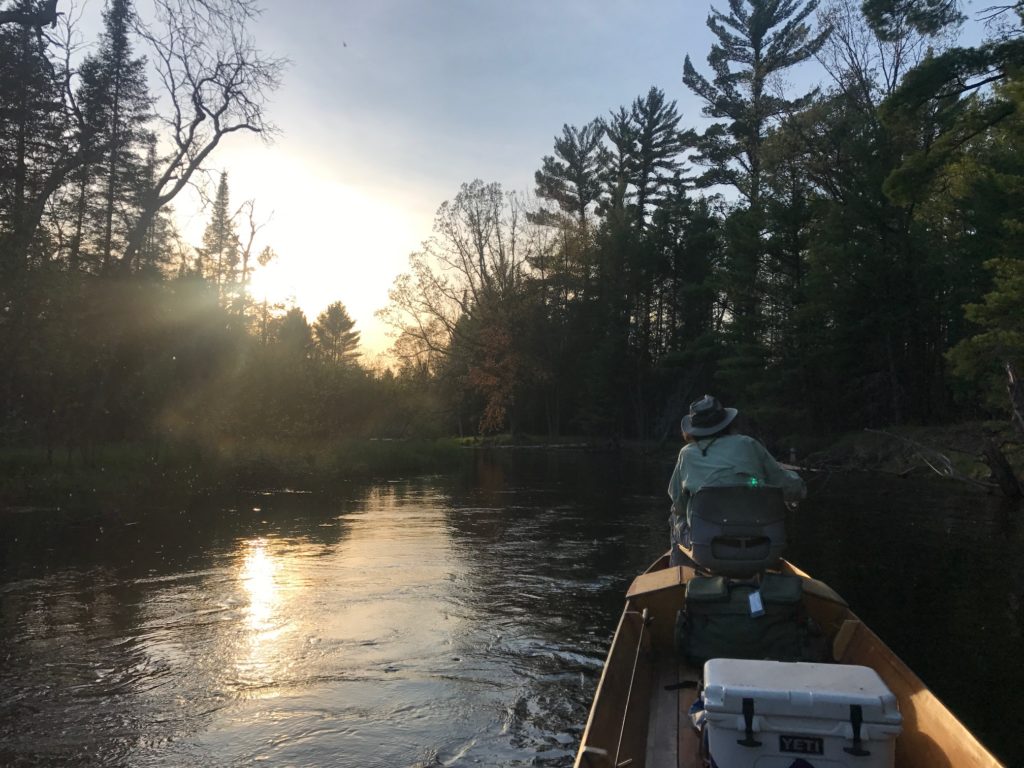 We’ve acquired just a heap of used rods and reels and now it’s time to start to unload them.  We have everything from rare Winstons (including a 8’6″ 6 wt) to workhorse Orvis reels.  This is a great opportunity to acquire a backup fly rod, or a great reel, for half the price they were new.  We’ll also be blowing out a few new rods and reels as well.  Stop in, cast a few, and see what you think.