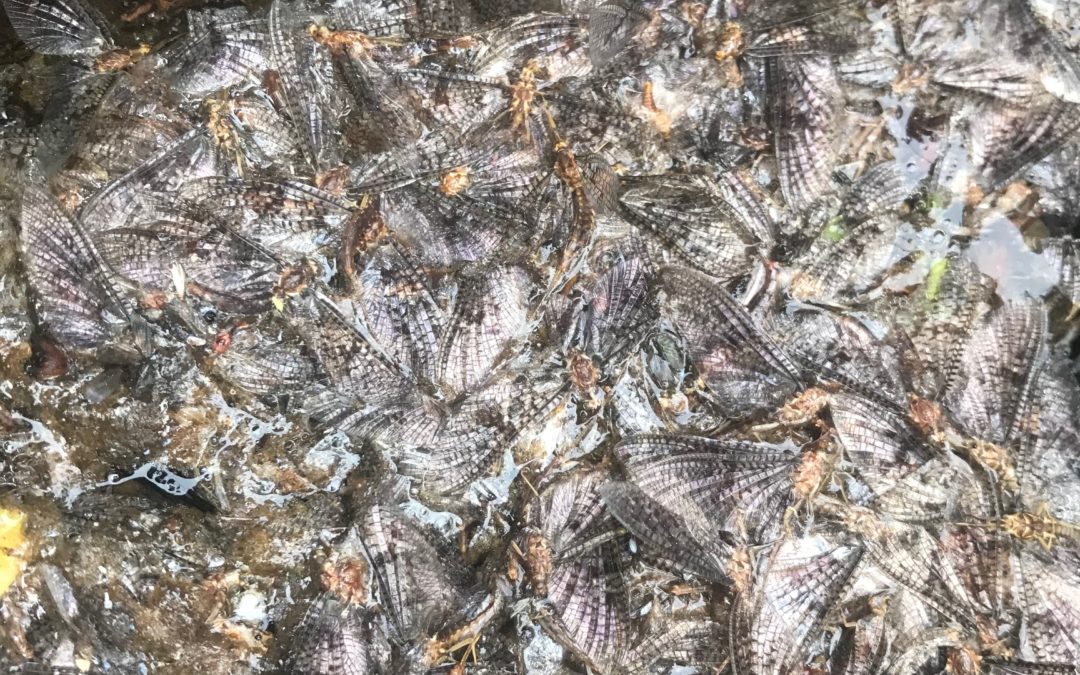 It’s hard to gage time in June.  Last week’s report seems written a month ago.  I don’t know where to begin.  Maybe Saturday: the soft light of a setting sun over fresh growth bank grass and above the grass the rise and fall of thousands of brown drakes and just downstream a half dozen big trout feeding in that lolling big trout brown drake sort of way.    Or this afternoon, when the drakes hatched all day, and Sidne caught her personal best brown trout at 3 pm under a bright sun after we spotted the rise — along a log of course — from far upriver.  Or, last night, nearly seeing my backing before the hook pulled free.   That was a trout I won’t forget.  I’ll be returning with a box full of revenge tomorrow night.

But I think my favorite evening was one of the quiet ones.  It was cold and drizzling and I found a good patch of water and a few drakes fell in the backwaters.  It wasn’t much to start, but around what I call Beautiful Bend a few trout began to rise in the corners and there were just enough bugs to keep the rises consistent, and not so many bugs that I had to worry about mine being noticed.  Sometimes the very “best” nights — you know, with the blanket bugs and the trout everywhere — just don’t pan out.  Heartbreak abounds in June.  I mean, there you are, just as you dreamed, and you can’t catch the @#$#ing fish.  Yep.  I’ve been there.  And if you haven’t been there, you will.  But on this quiet, still, drizzly “off” night I landed four good trout from the bend, laughed at the one I lost, and beat it out of there before my luck turned.

There have been some awesome early evening trout landed this week: 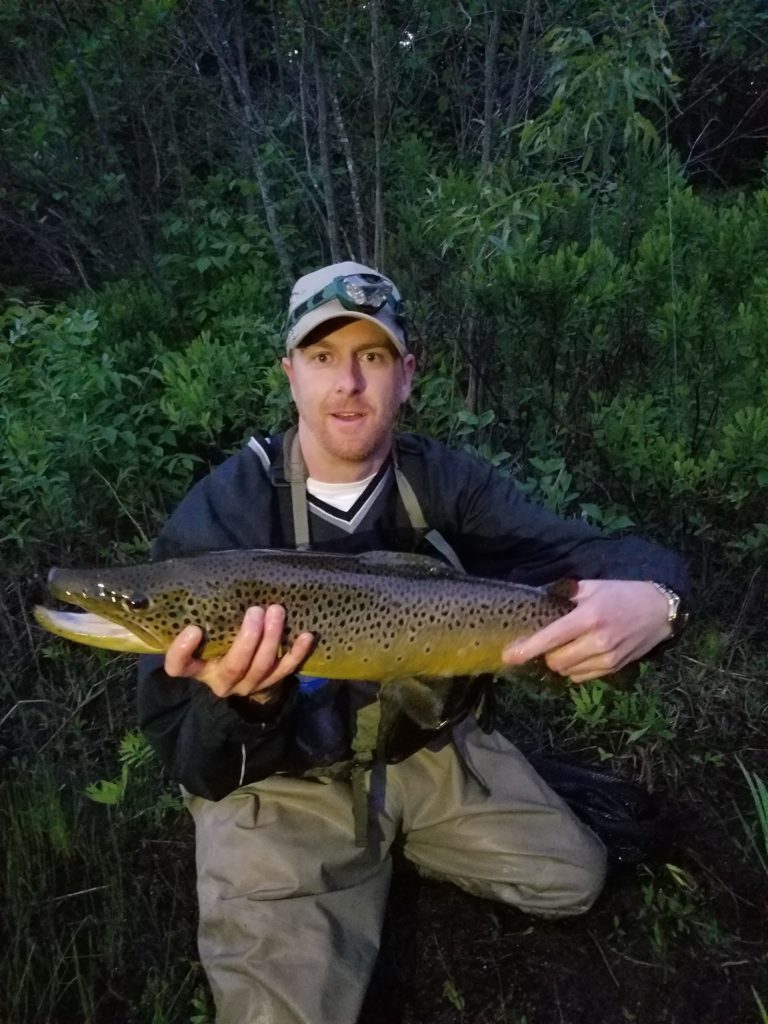 And even some afternoon Iso eaters: 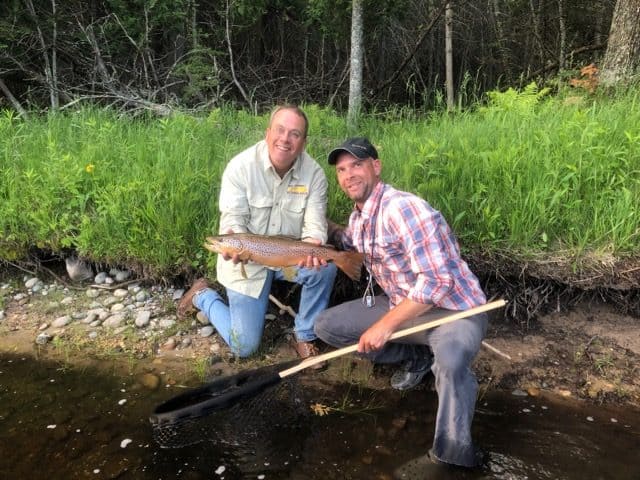 There are a lot of smiles around the lodge.  It’s hard not to smile when the idea of taking a night off to watch television is unthinkable, when a single cloud obscuring the sun makes you want to drive 100 mph to the river just to see if it’s on, when you’re really just fishing full time, and such things as work and eating and sleep are nothing but interruptions between the quest.  Shipwrecked, we like to call it.

The cold has stalled the brown drakes and the next warm evenings should bring them to a close through much of the Au Sable system, though I’ll bet we see a few in most areas for a week or more.  The Manistee and Holy Waters will have drakes right through the weekend and next week.  The South has a few nights left, and so does the North.  Intermingling with the drakes are the equally important Isonychia, and these will increase through this week.  Mixing in are the golden stones, the yellow stones, the thrashers, the sulphurs, the very persistent and important Borcher’s Drake.  If you don’t know what to tie on, try Rusty’s White Knot.  Mahogany body, size 12.  You should be fine.

Water levels have dropped and cleared and the entire river system is wadeable.  Today was the very first day that the Holy Waters actually looked like the Holy Waters: beds of green grass, crystal water, trout scattering from the boat shadow.  It was a perfect day, and a few nice trout rising in the shadows helped.  We tried to match the many hatches but did best just fishing through the hatch with larger attractors. 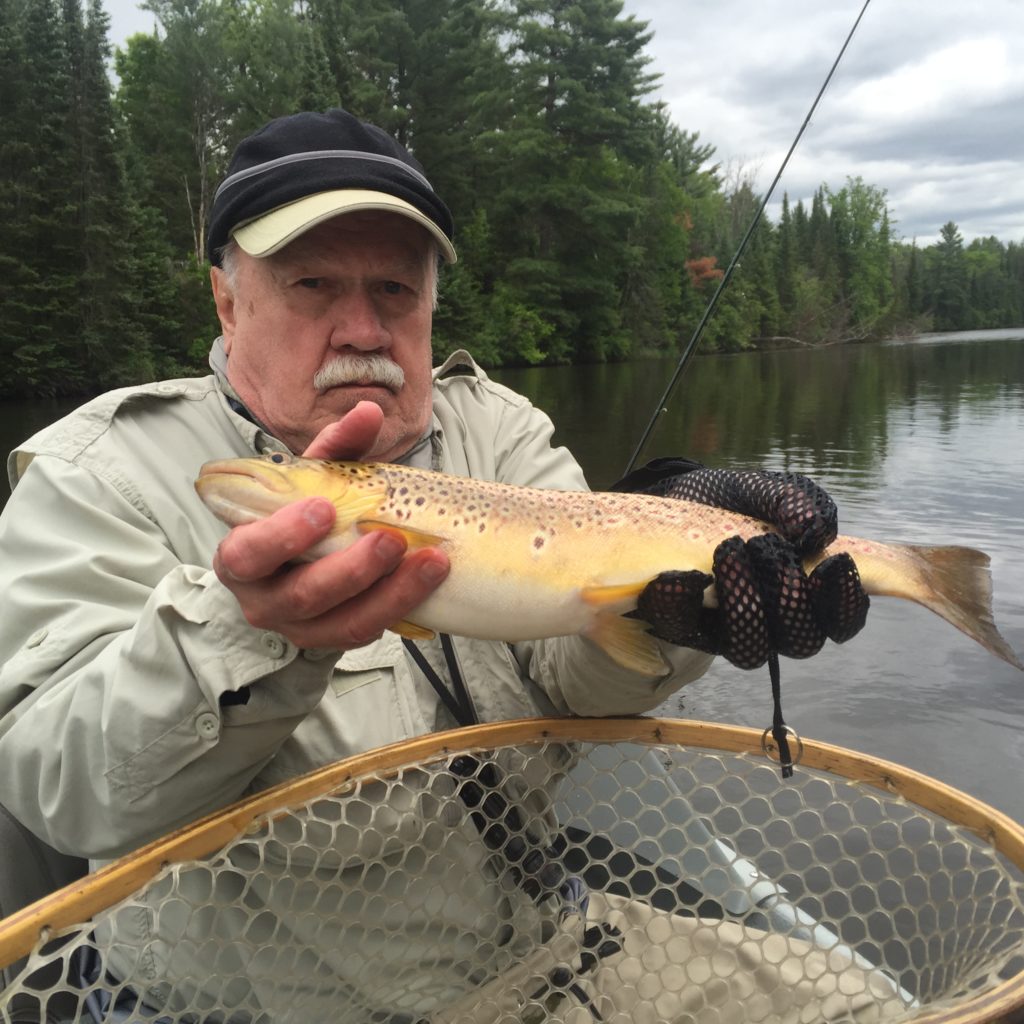 Dick with a dandy.  Hang onto it… 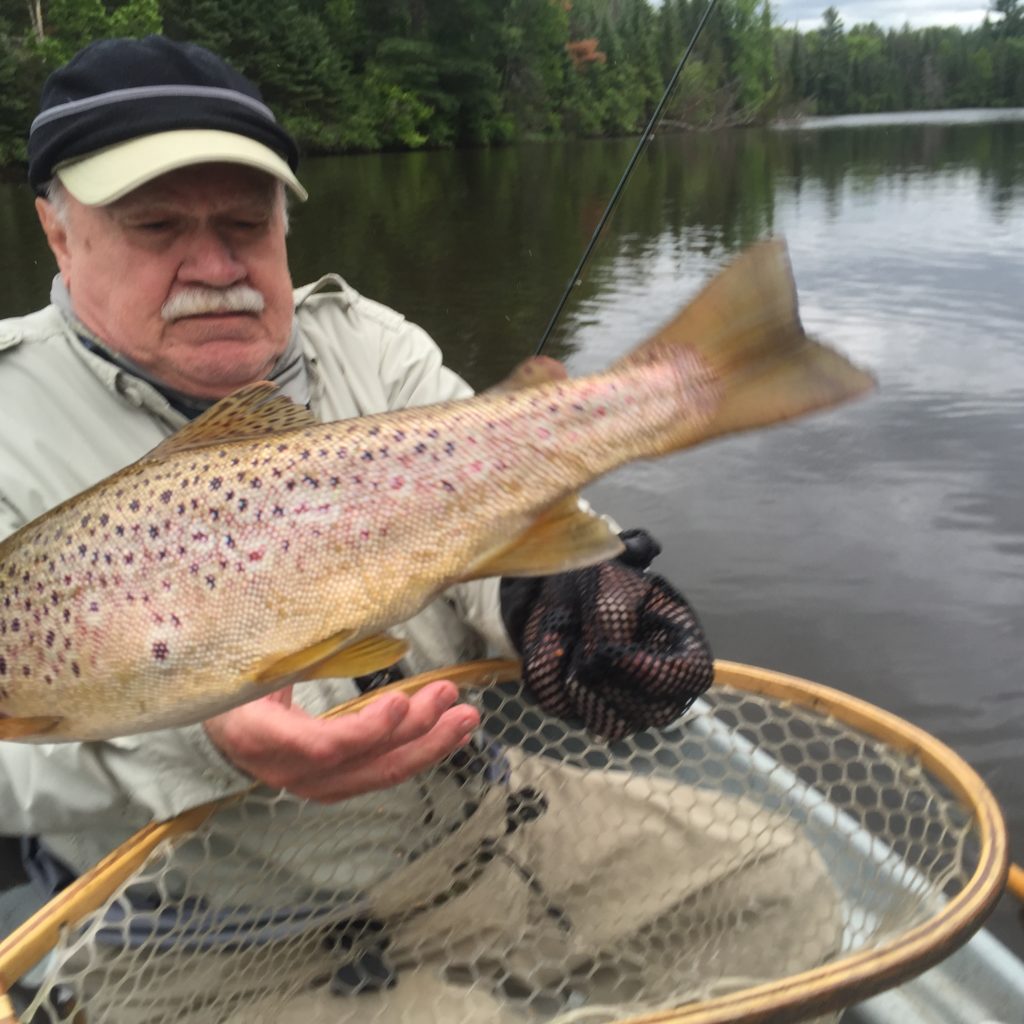 There’s so much fun to be had right now, so much excellence to be squeezed out of the day.  We’re a week to ten days away from hex and in the meantime some of the finest all-around trout fishing of the year.  Slow afternoon?  Try swinging a big soft hackle to imitate the big Iso and drake nymphs.  Or got chuck big drake dries way up along the logs and sticky backwaters (this has been particularly effective this week).  Fish a morning.  Or try the traditional dusk bank sit and see what rises on a good bend.  Whatever it is, enjoy this great week and great forecast.  Don’t squander a minute of it by not fishing.  Skip weddings.  Forgo graduation parties.  It’s going to be a good one. 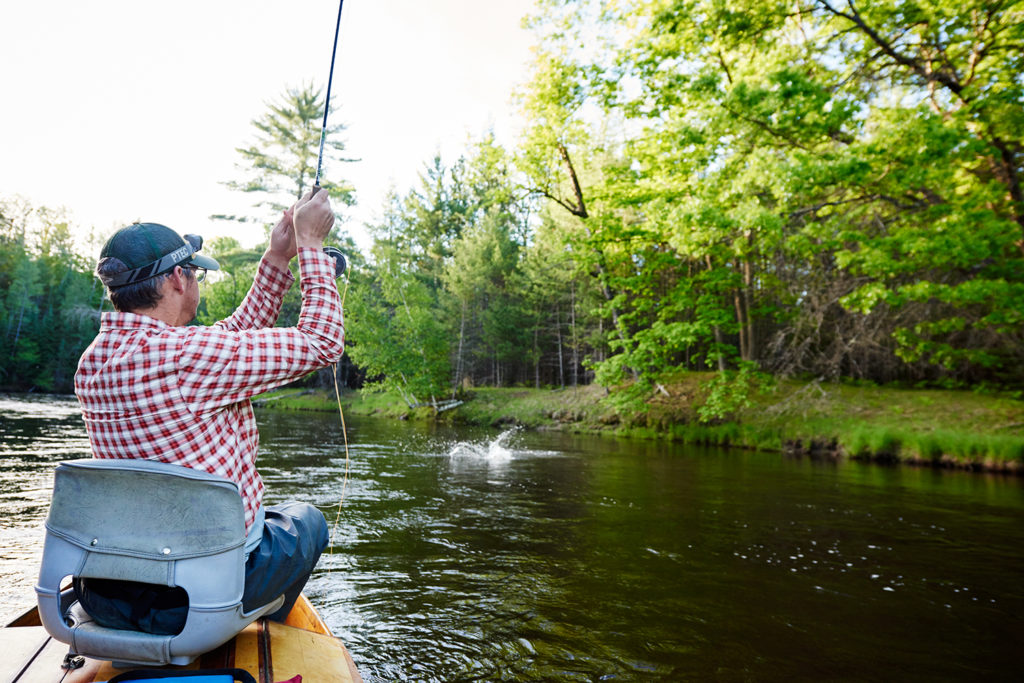 Love those bubble lines.  As Jimmy says: “the foam is home.”

Cast a Winston, and (maybe) win a Winston.  Dirk Fischbach will be onsite with a bunch of Winston rods for you to cast.  Air, BIIIX, BIIIX-Plus, Nimbus, Kairos.  What a line of dry fly rods!  Cast a rod, enter your name and number, and you’ll have a chance to win a free fly rod.  We will be accepting rod and reel trade-ins all day as well.  Gonna be a fun day!

From now thru July 4th, we have a special June dining menu. This is wicked June fishing grub. 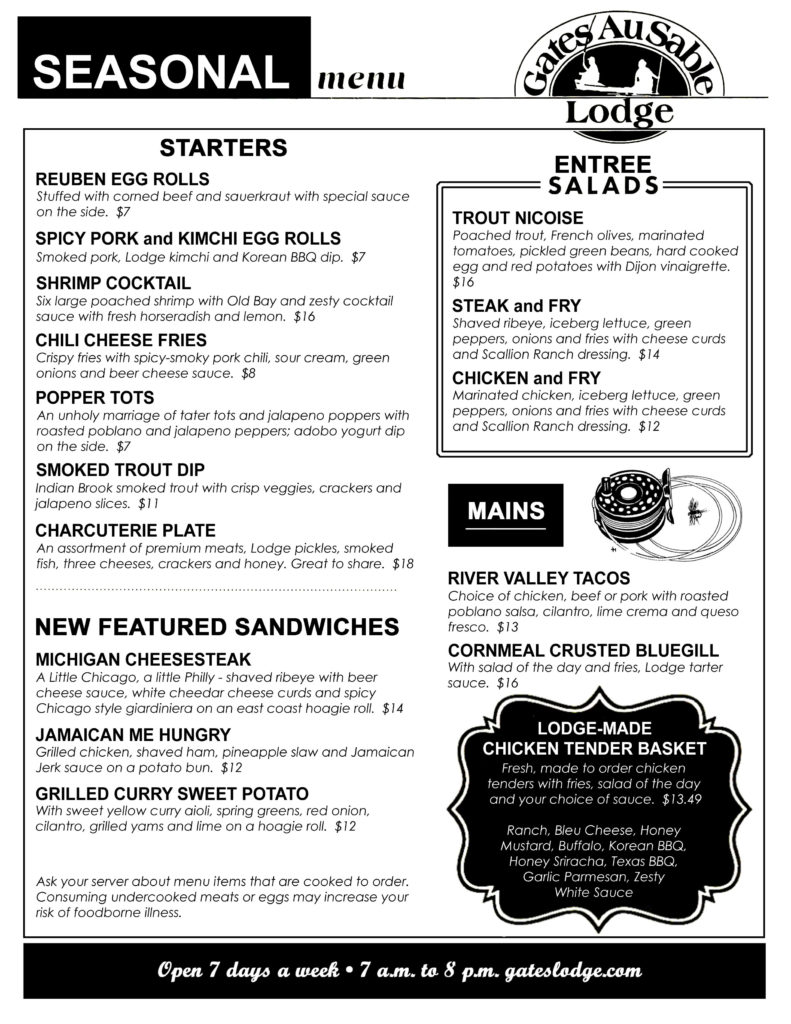