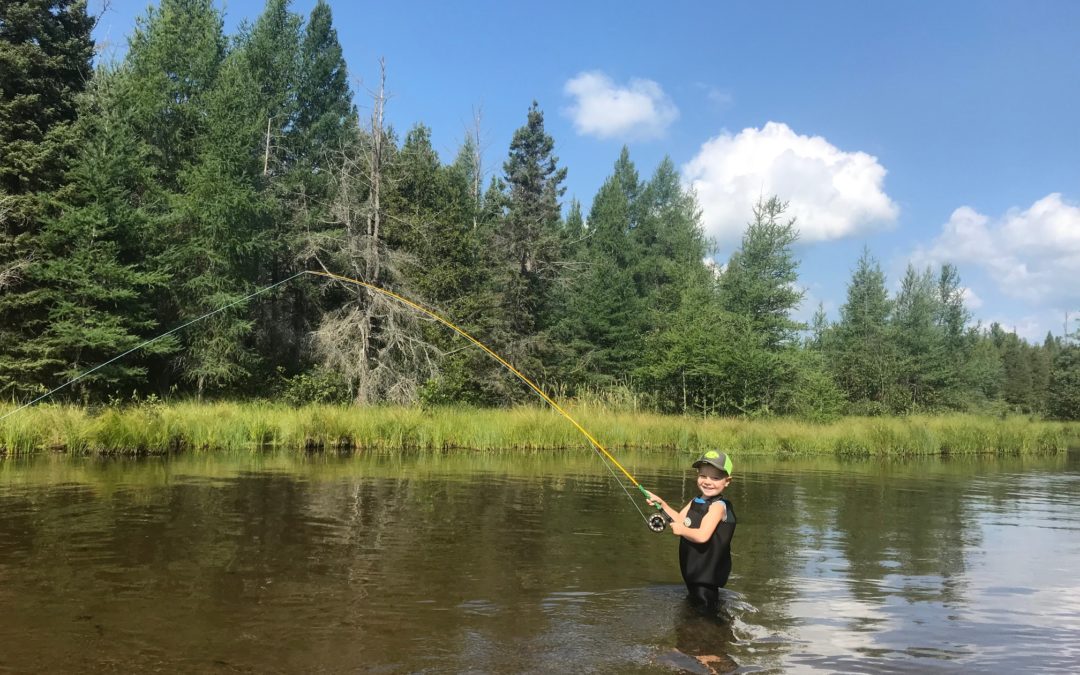 What a great and exhausting weekend!  We pretty much fished, taught, cooked, and laughed for 24 hours.  It’s a fun weekend, but don’t think I could survive more than three of them in a row.  Tony and Gunnar won the Midnight Derby for, I believe, the third time.  And 35 kids showed up for the Kid’s One Fly (Box) Challenge and had a blast.  Up top, Sawyer having a blast.  Below, the new “toilet flusher” trophy.  Thank you to everyone for making these events a success. 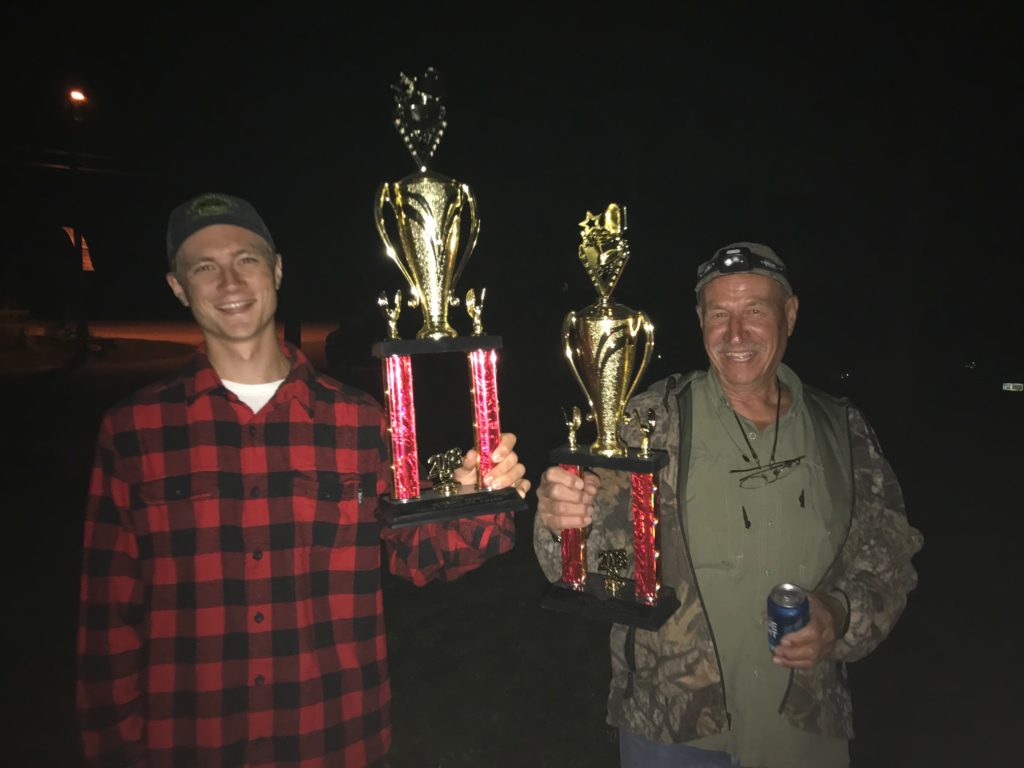 It’s been pretty hot, but the water temps have remained safe for trout  upstream of Mio.  Below Mio, the white flies are hatching but it’ll take a cooldown before us fly fishers get interested in that stretch.  Such a weather turn looks like it may be coming.  In the meantime, we’ve been splitting time between hatch matching the morning and evenings, attractor fishing and creek fishing, popper fishing bass, and mousing.  It’s a fun, easy, random groove to be in, and it’ll keep going for another couple of weeks.  It’s when we get to act the part of actual fishing bums.  Excited invites are made at weird times of day, and met with a shrug, and a “sure, why not?”

This could be a two-hour drive to a creek, or an all-night float, or just a partner to help carry a canoe into a lake.

All area rivers are very low and clear and in the daytime this means long leaders, fine tippet, and deft wading.  I haven’t seen a good flying ant event yet but that should happen after the first good rain.  Friday?  You never know.  Flying ants make brown drakes seem clockwork.  Make certain to have them in cinnamon and black and a variety of sizes.  For whatever reason, Borchers work pretty well during the ants as well.  Just a good fly, I guess. 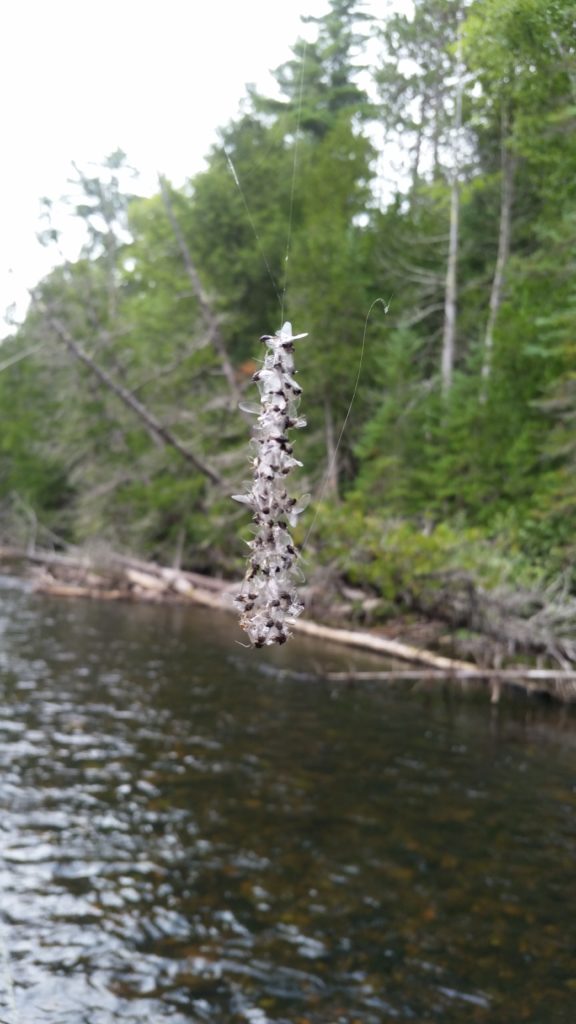 A great trico cluster in a collapsed spider web

For the night fisher, the low water tends to push the trout toward the middle of the river.  They have been very hungry the last few nights.    My guess is deft wading is far more important than fly selection, but every fish we caught the other night ate black, though I think Denny got bit off by a pike using a very white, very UV fly.  Now I know pike don’t feed at night, but Verlac almost landed a pike the other night at around midnight before it toothed the leader…and he saw that one in the flashlight.  So pike almost never feed at night.  As the moon rises this week and into next, the old sages say to use yellow.  I’ve also done well on small black gurglers and finer tippet.  Who knows?  It’s night fishing.

The size 18 olives are winding down rapidly, and this leaves a gap in the big bugs.  Light Cahills can be important on the Manistee and South Branch.  The fall Isonychia should begin sometime near river cleanup.  The white flies below Mio will be an option if and when the water temps drop below 70 degrees.

This report was delayed as I ended up doing a short morning float today.  It was pretty darn awesome in an Au Sable August way.  We launched right into a light but fishable trico spinner fall which I ignored but shouldn’t have.  There were trout rising everywhere in the flat water and my thought was to get into the riffle water downstream and fish a dry and dropper.  This worked…kinda.  But by about 10:30 am the skies were blue, there was a weird fog coming off the river from the heat of the day, and the water was crystal clear.  Not a trout rising anywhere.  We put on a small streamer and it was good fishing right through the sun.  They were almost all brook trout except for one brown and one dandy chub (ha!).  The trout were very much podded up on the front and back side of the gravel humps, and it seemed like every deep, riffled inside bend. 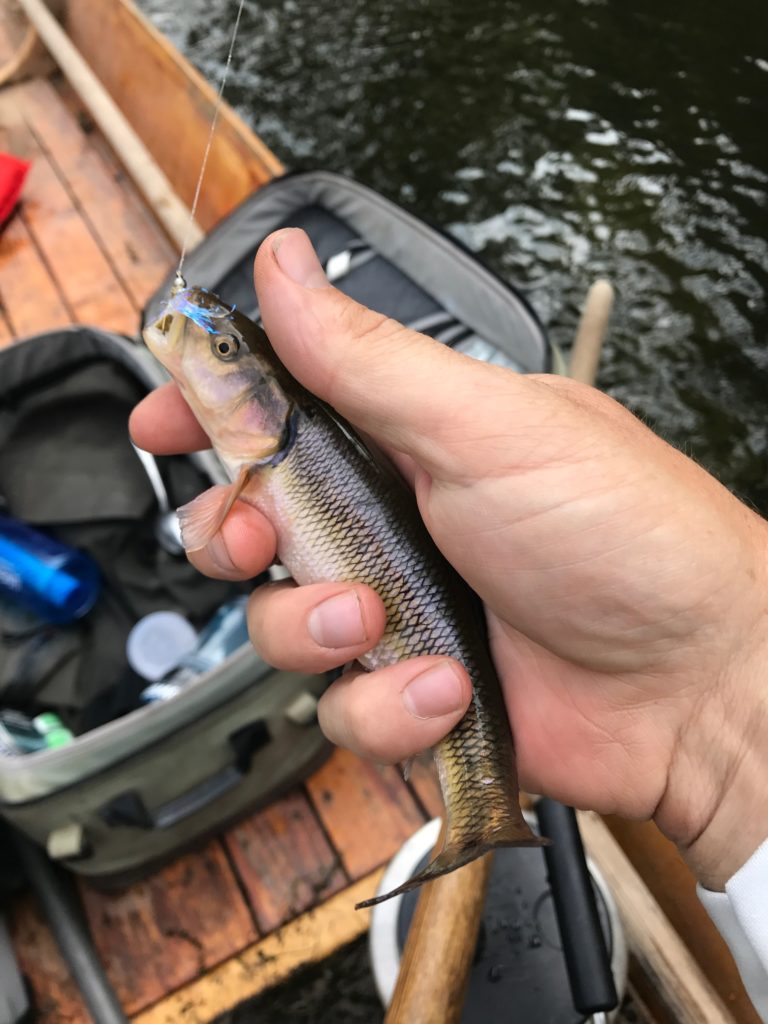 As temps start to cool and the sun starts to slant through the afternoons, terrestrial fishing with ants, parachute hoppers – along with general attractor flies – can make the late afternoons some of the best fishing of the day.

Once again, the Anglers of the Au Sable is sponsoring the annual cleanup of the Au Sable River. This year we’ll be cleaning both the upper and lower Au Sable. Includes a great barbecue lunch! We need volunteers – each and every one of you makes a difference. To sign up, or for more information, talk to Josh: 989 348 8462, or [email protected]