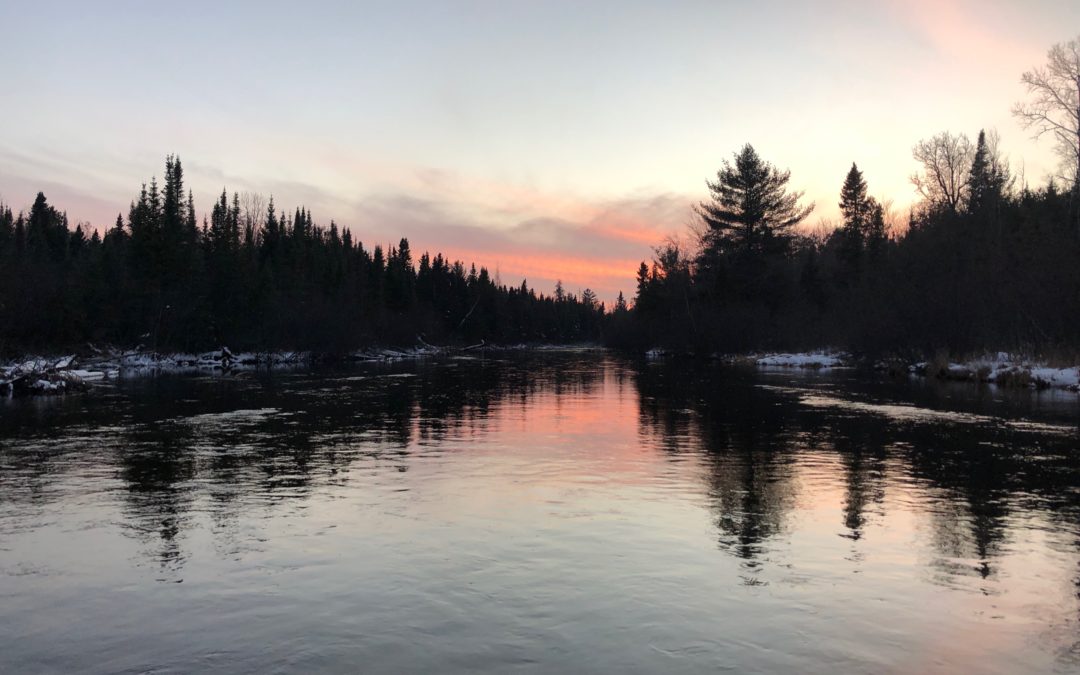 Some winter weeks come and go: a few trout caught, a few trails skied, a few Netflix miniseries watched.  Other weeks are better.  This past one was better.  A big front pushed through, the forecasts oscillating between all rain and ten inches of snow.  We ended up somewhere in the middle, and I guess the middle was what the trout wanted.

A few father/grown son trips resulted in some great fishing on all three branches of the river.  Denny floated Dan and Grant and the boys found some great fish… 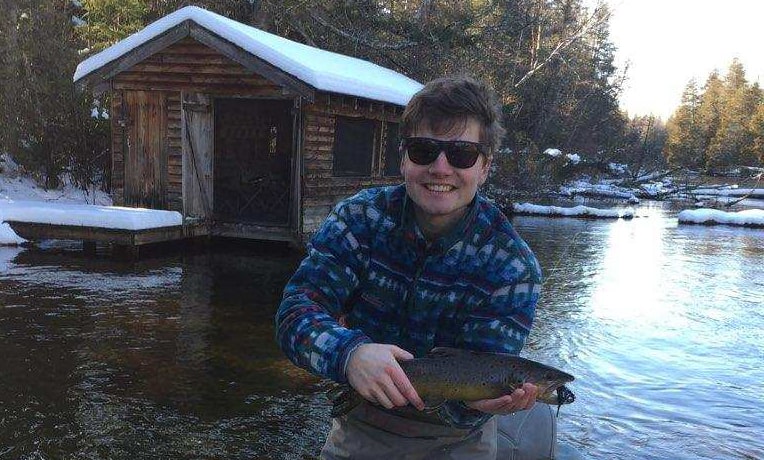 Pixelated Grant with a pixelated trout 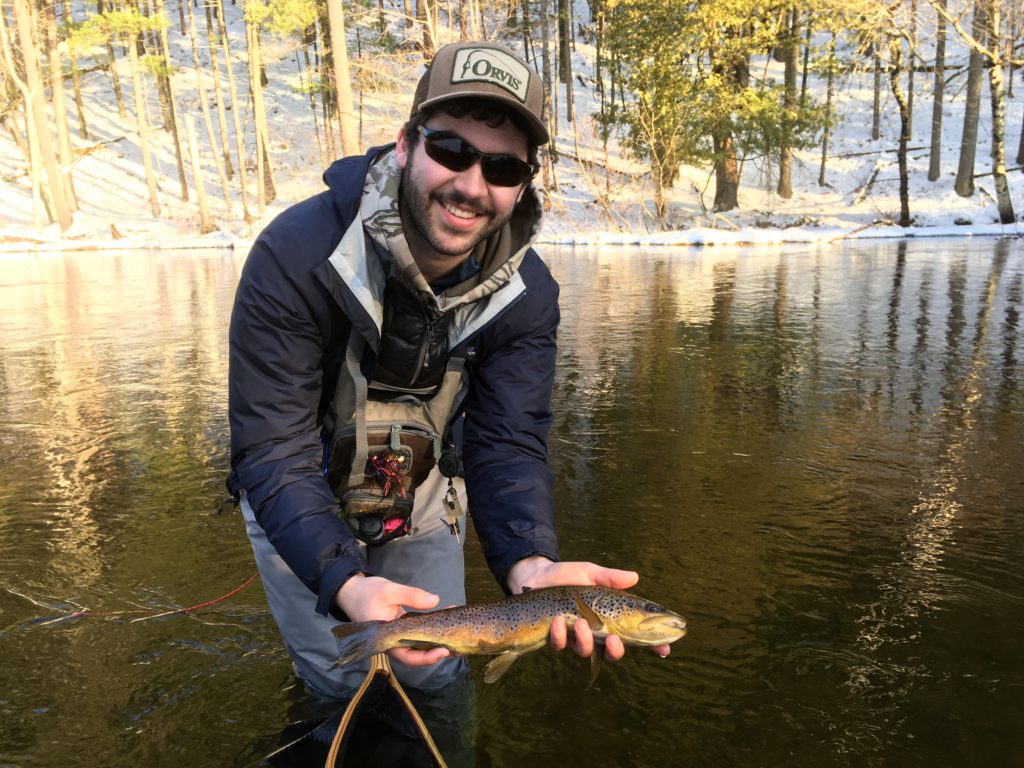 I made it out on an icy Monday, just in the knick of time.  The kids had no school and my escape from home became a pretty desperate situation.  There just aren’t enough hours in the day to be building Lego castles when the temperature is on the rise and the winds are from the south.  I appointed myself project manager of the Lego project, completed it, and then flew out the door, scattering dogs and sloshing coffee.

The river was too pocked with falling ice pellets for any sight fishing, but I knew the trout had to be sitting shallow.  Yarn indicator, long leader, two fly rig.  Cast up at the deep edge of the sand…  Okay, the first trout from the first pool was tail hooked.  However, I hooked and lost two, and both felt big.

Excited, I crossed the river to the next pool, a long straight deep run. The inside of that pool, if there is an inside to a straight pool, is an overlooked beauty.  A submerged tree, now dilapidated, has left a scour that is a perfect winter-mix of sand and gravel and, on this day, trout.  The ice pellets let up just a bit for my only picture of the day, a medium rainbow with the colors of the spawn. 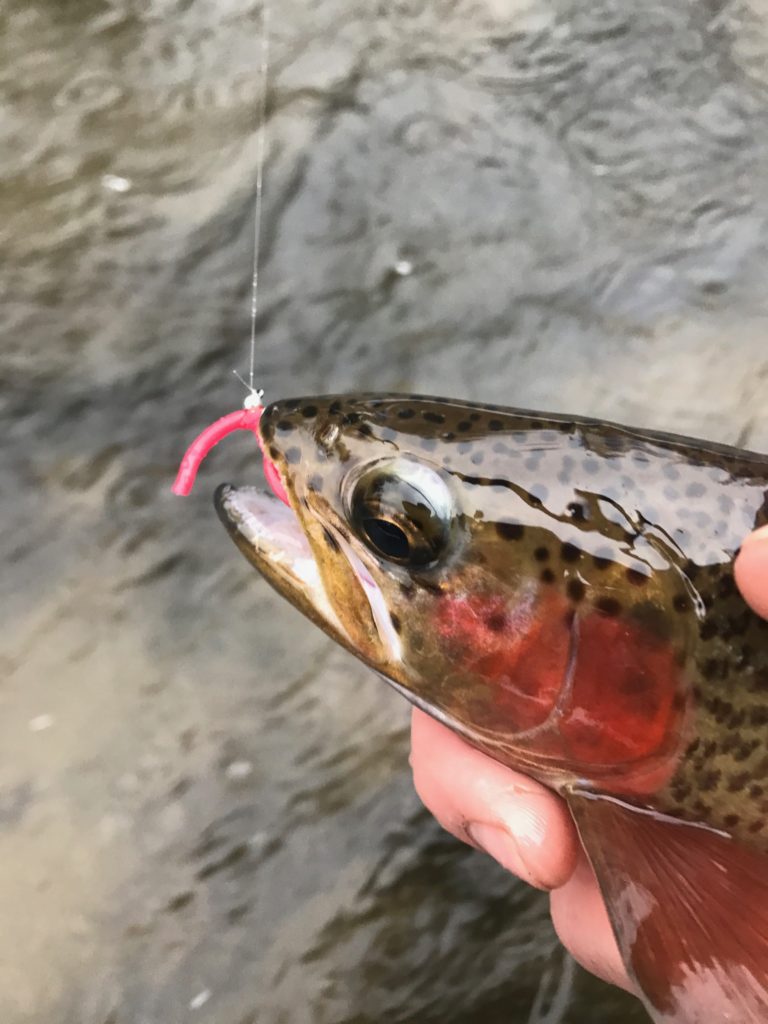 Sometimes you gotta fish a worm

And then the universe flipped a switch.  It does this sometimes, even in the winter.  I remember a day that Lance and John had years ago.  It culminated in a 26-inch rainbow, but the bigger story was a huge fog bank that rolled in due to the south wind and melting snow, and the absurd number of trout they reported catching.  Both get somewhat foggy themselves when gazing wistfully back at the memory of the best…nymphing…day…ever.

This wasn’t that.  But it started to get close.

The upper pool in this beat is a complicated dandy with four or five good runs within the pool.  A log has divided the pool, creating a nice sand bar in the middle, two troughs on either side, and then the pool merges and flows along a small bluff.  I hooked and landed a lot of trout, including seven on ten casts, two of which were big enough to necessitate a trip downstream to be landed in some slower water.  These were dandy trout, leaping rainbows, head-shaking browns, and even a menominee aka “round white fish” which I was going to knock in the head for dinner but I had a few witnesses and didn’t want a case of mistaken (fish) identity.

And then, more.  On the way back down toward the truck the trout were everywhere, even in water I’d already fished.  The trout switched off the Squirmy Wormy and went right for the nymph.  The ice pellets bounced off me.  The scenery?  I didn’t look at the scenery.  I watched the water with the certainty of an experienced diner watching the silver metal top removed, with flourish, from the plate of the main course.  Near the end of the downstream wade, a few contractors, apparently on opposite ends of the gigantic house they were constructing, yelled this:

Damn right I did.

It was the perfect day to precede the one I had today in which I attempted to sight fish some much more difficult trout in some much slower water.  Today, this ****er did not have another son of a bitch…or any for that matter. 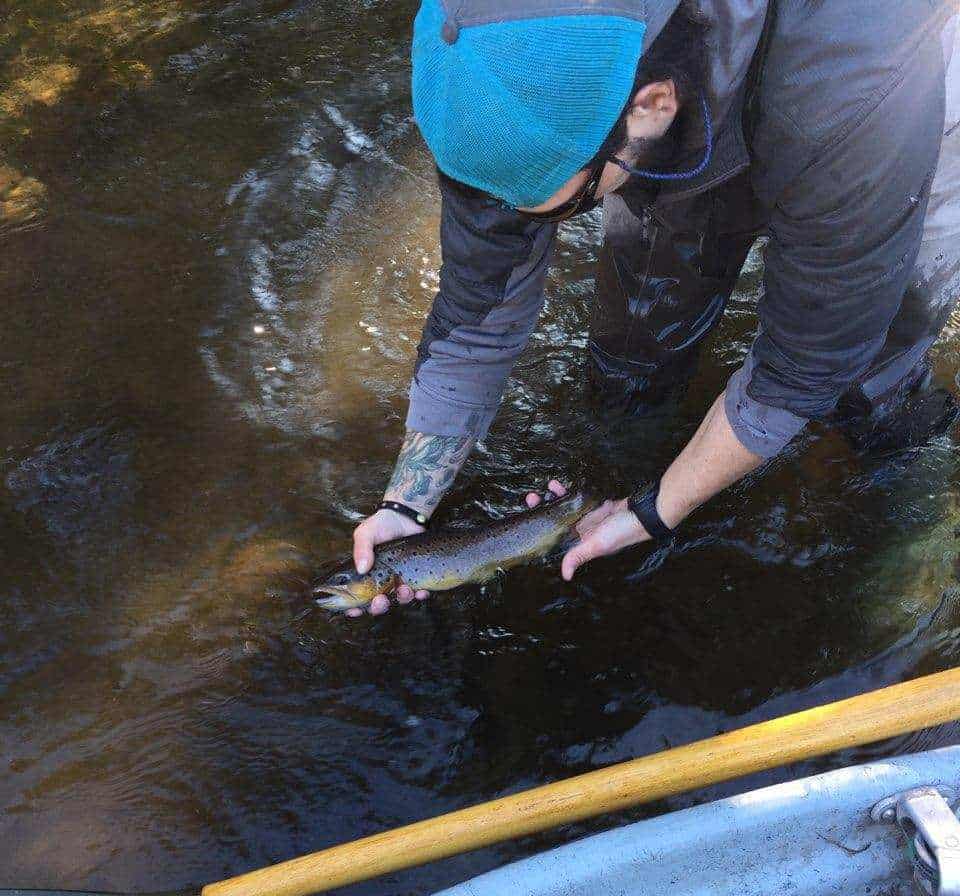 Denny with the release

This weekend, and most other weekends this winter (schedule coming, I promise) we’ll be tying flies on Saturday mornings in the (remodeled) board room, serving dinners on Fridays and Saturdays, and breakfasts on Saturday and Sunday mornings. Below are the menus for both meals.  We will be requiring dinner reservations…  Hours for dinner are 5-7:30 pm, and for breakfast are 8-11 am. 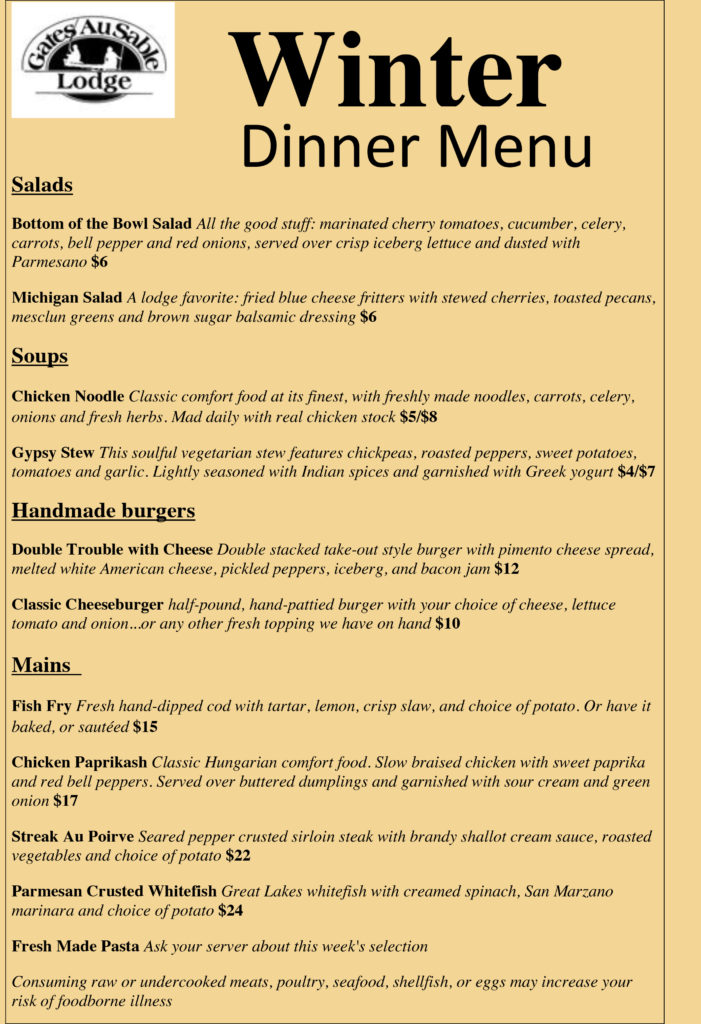 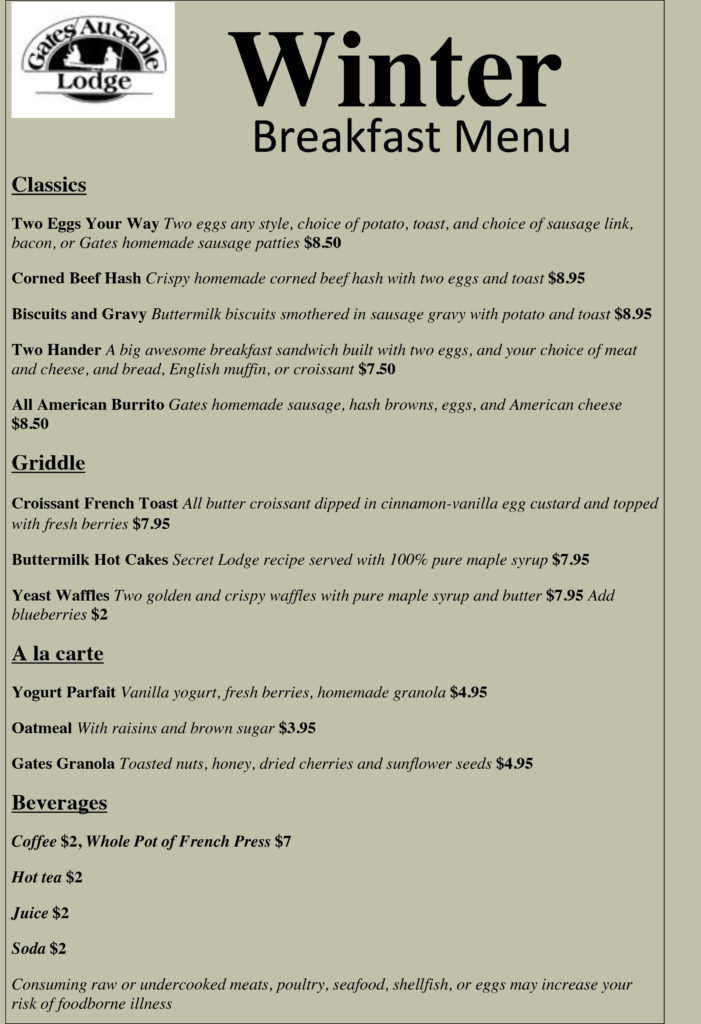 We have ten rooms open for the winter.  Coupled with excellent cross-country skiing, winter fishing, snowshoeing, and fly tying…take a break and have a winter vacation.  You’ll love it. 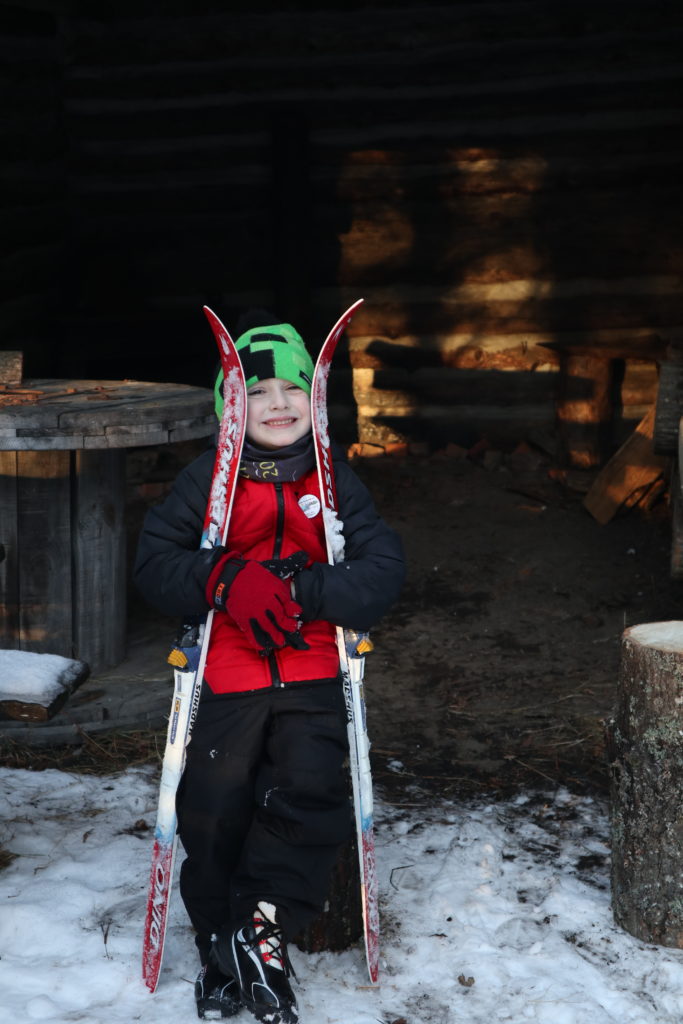 The Mason Tract has been groomed courtesy of Friends of the Mason Tract and their number one volunteer, Cris Jones.  Hartwick Pines trails are groomed and wonderful shape.  Hanson Hills is always groomed perfectly, and ski reports and all sorts of outdoor gear are available from our friends at Northbound Outfitters.  Forbush Corner has Olympic caliber trails.  And Wakeley Lake, while not groomed, offers awesome backcountry skiing and snowshoeing around the most picturesque lake in the county.  All these trails are within fifteen minutes of the lodge.