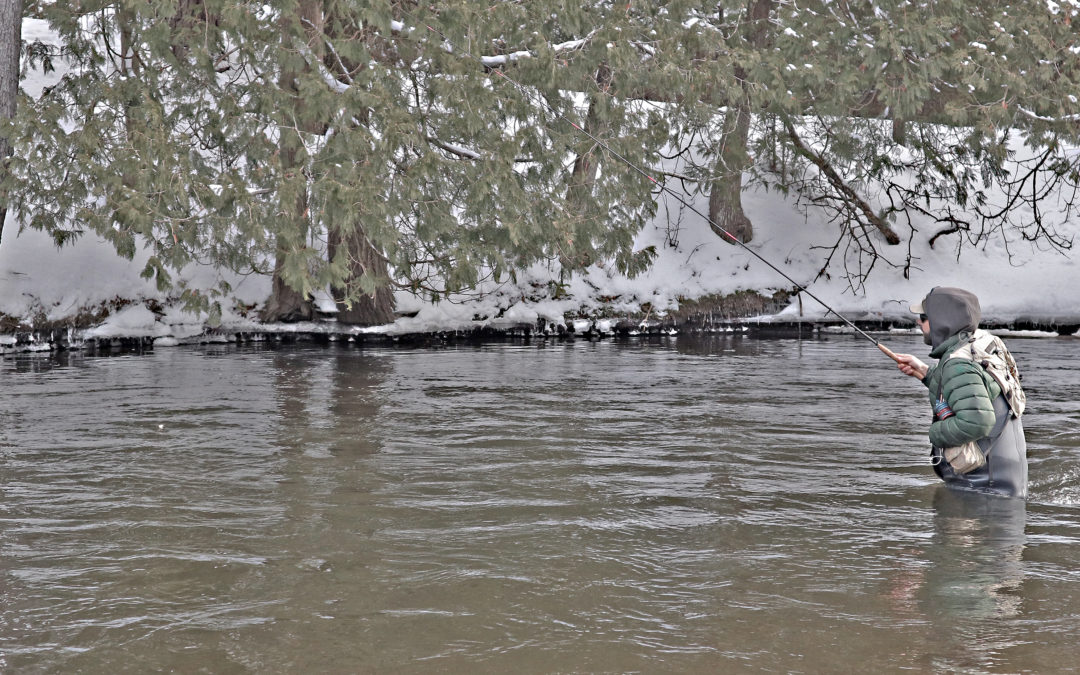 Have you heard the story about the day of winter fishing that didn’t go as planned?  Yep, that’s most of them.  This morning it was -17 degrees and the river was slush and so we went skiing to pass the time and to allow the thaw.   By 2:30 pm we were finally on the river, anchored at the top-end of a series of pools that I’ve spent the winter trying to figure out how best to nymph.  This is not the most prolific water in the Au Sable.  In the winter it is some of the most beautiful, a few virgin white pines on each bend.  This winter I’ve averaged about .75 trout per outing to these perplexing pools, but even at 3/4s size they are usually larger than most of the trout I catch nymphing the upper river. 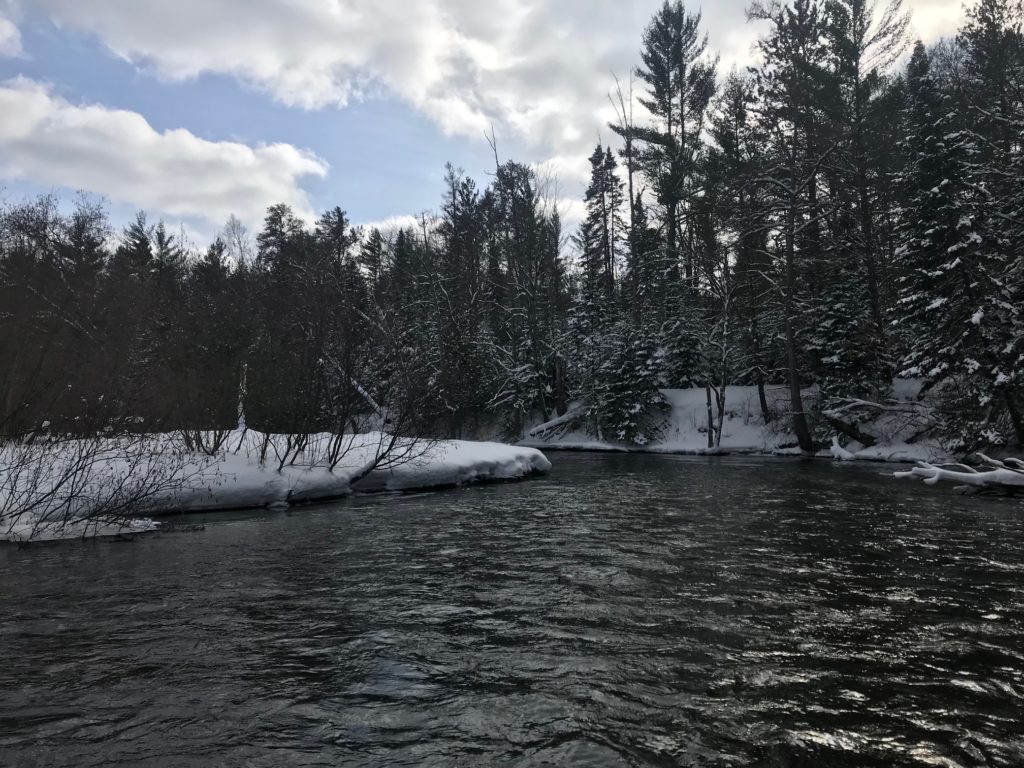 The most effective tactic has been sight-fishing to the trout on the inside of the bends.  I have caught a few trout on streamers and a few trout on indicator rigs but these particular pools just don’t fish as they should in the winter.  In the spring it is much better nymph fishing when the water is higher and warmer and the first mayflies are hatching.  I think in the winter the trout are either resting under cover, or, if they have decided to feed, they move to the inside bends where they are best sight-fished.  Some or all of this may be rationalization for why I can barely catch a fish blind-nymphing this particular saucy dark water that is less than a mile downstream of where I usually do catch a fish or two.

Anyway we hooked a couple trout this afternoon and the one I hooked felt big.  It ate a blind-fished nymph on a deep inside bend and it flexed the rod right into the cork.  On a cold sunny day in February just the feeling of connection was enough, but it would have been better to have seen it.  What if it was a foul-hooked whitefish?  What if it was an enormous rainbow?  It’s that time of year when that rare race of Au Sable rainbows head to the upriver to spawn pausing to rest in pools just like this one, I thought.  What if it was twenty inches?  What if it was larger?

Many years the first week of March is also the first real spring-like warmup, and often some of the best streamer fishing of the year.  This year: over two feet of snow, probably almost that much ice on the lakes.  Winter arrived late but now it’s here.  Portions of I-75 were closed on Sunday and Gaylord closed almost all its roads and most of us lost power as a healthy blizzard  left drifts over four-feet tall.   Access is difficult throughout the river system and impossible through much of it.  Still, the river is fishing well in relation to how damn cold it has been provided you find the right day and the right spot.

The ten day forecast doesn’t show much in the way of great fishing weather, though there are some high notes, including this weekend, with highs near thirty on Friday and Saturday, and toward the beginning of the week of 3/11.  We’ll spend all next week — which looks very cold — preparing for the Midwest Fly Fishing Expo and thinking of spring.

We’re tying flies this weekend: It’s another Free Fly Tying Saturday!  We’ll have instructors, chili, heat, materials, and everything you need to have a great time tying flies.  Never tied a fly?  We’re here to help!  Tied a million of them?  Come tie with us.  We’ll show you how to tie the flies that you want to use this season.  We’re tying 9 am – 1 pm.

Our restaurant is open this weekend!  Friday and Saturday dinner, Saturday and Sunday breakfast.  We have a reduced but ample winter menu, and daily specials: