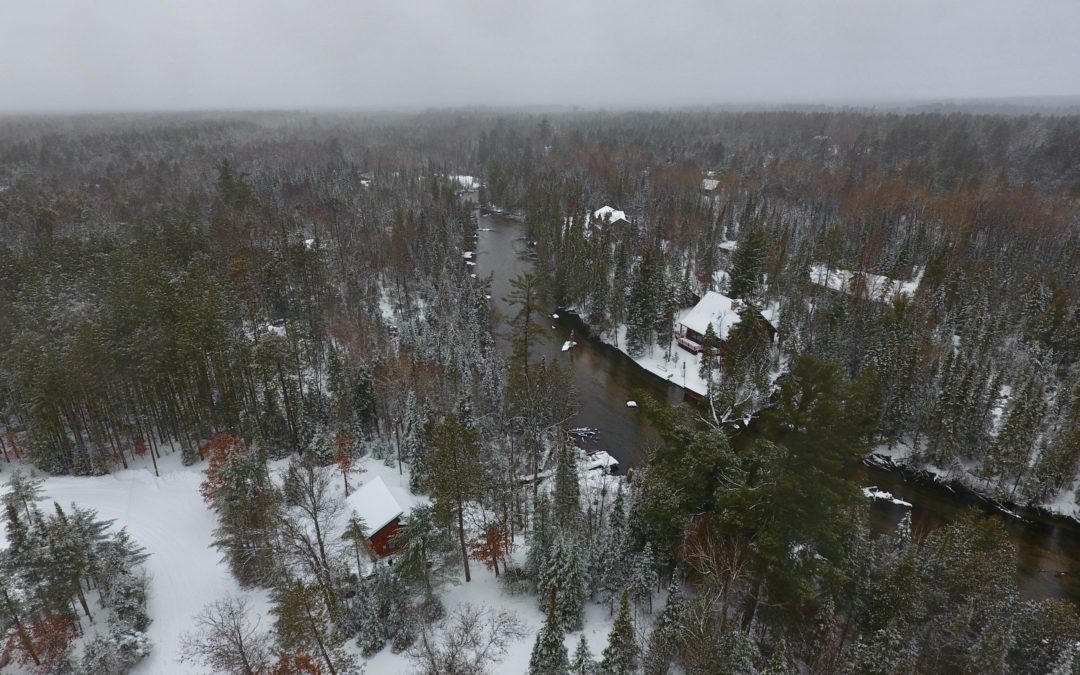 These first warm days are some of the best of the spring, and they are preciously few.  These are not the midwinter warm-ups, which were in short supply this winter.  These days are the creakingly slow change of the Michigan seasons.  The light lasts longer, the angle of the sun is optimistically high.  The trout, which had been turned into ambush predators by the dire straits of winter survival, are returning to the mid-river nymph buffet.  The higher, warmer water and the maturing bugs means there’s just enough to eat to make fighting the current worthwhile.  And when this change happens, at least to me, it’s spring.

Having recently returned from the MFFC Fly Show there hasn’t been much time for fishing.  We steamed the fly shop carpets and scrubbed the walls and rearranged the shop in yet another failed attempt to eek out a few more feet of display space…but at 2:15 pm I’d had enough.  It was 40 degrees and cloudy and the snow – of which there is plenty – had the fog of melt over it.  It was a windless, humid, cloudy day in March.  Normally this would mean a boat and streamer fishing, like Denny and Kim did today: 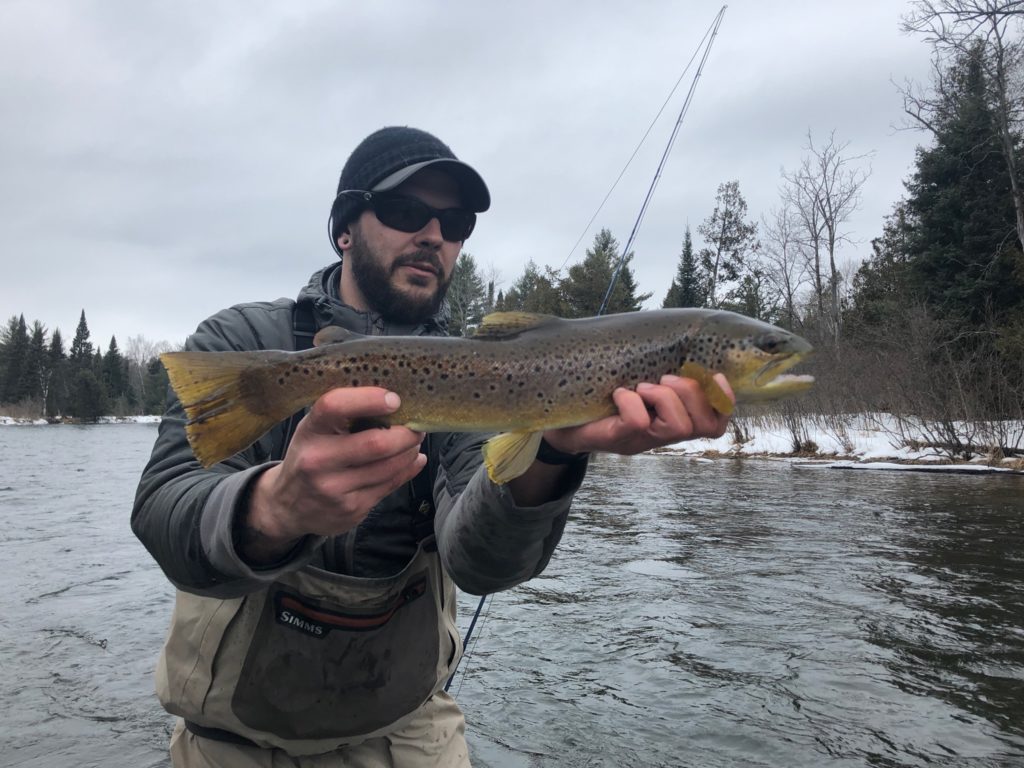 But I only had an hour before the bus dropped the kids off, so I grabbed the nymph stick and took my time heading up a familiar run.  The first three fish I saw were holding deep but they were feeding.  They were separated by about twenty feet, and I spooked them one, two, three.  Deep, nymphing fish are difficult in slow, clear water.  The next fish though was in the shallow sand.  I tried a cast to his left, then his right, and finally right down the pipe.  I did not see the take but the line stopped and I set and he came flying out of the water in a series of three jumps that let me know that it was spring. 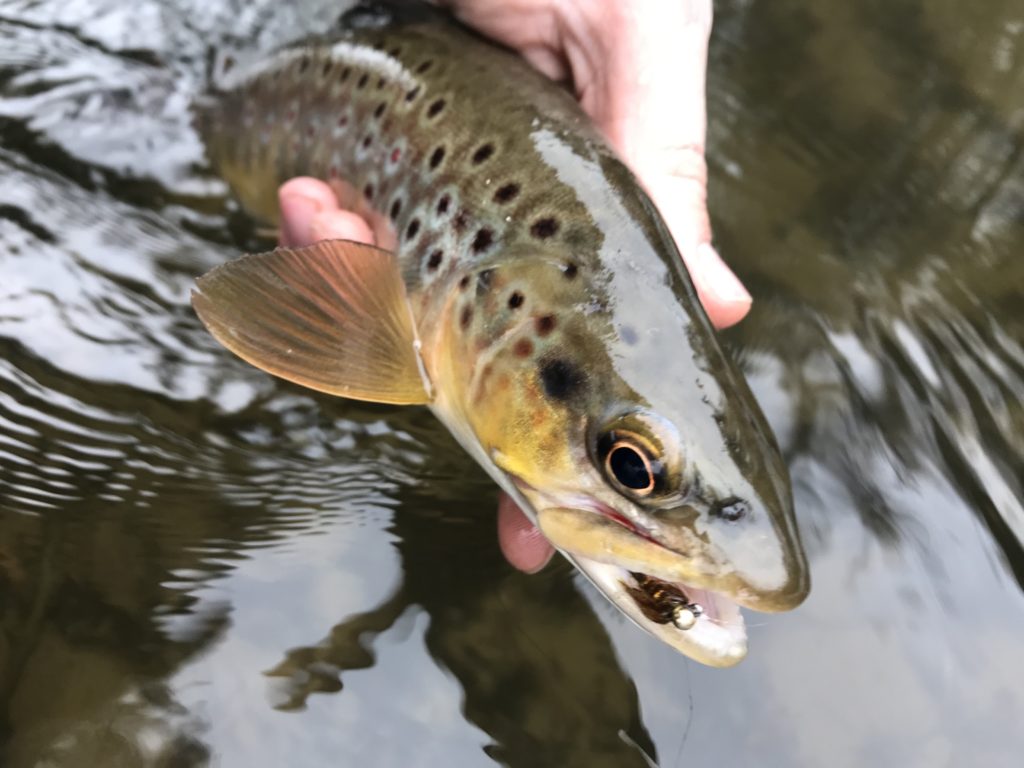 It was the kind of forty-five minute fish that on the Au Sable is not routine, especially in March.  The biggest trout was sitting in the middle of the river and I could spot him only because he was so big, ghosting across the lip of a drop-off.  I did not get a pic of him.  He thrashed away as I dug for the camera and I, for whatever reason, had no net.  But just upstream another trout, sitting along a log, ate confidently and posed nicely.  He had just about the prettiest spots I’ve seen all winter and he fought like a trout that no longer worried about the cold.  Today, I wasn’t either. 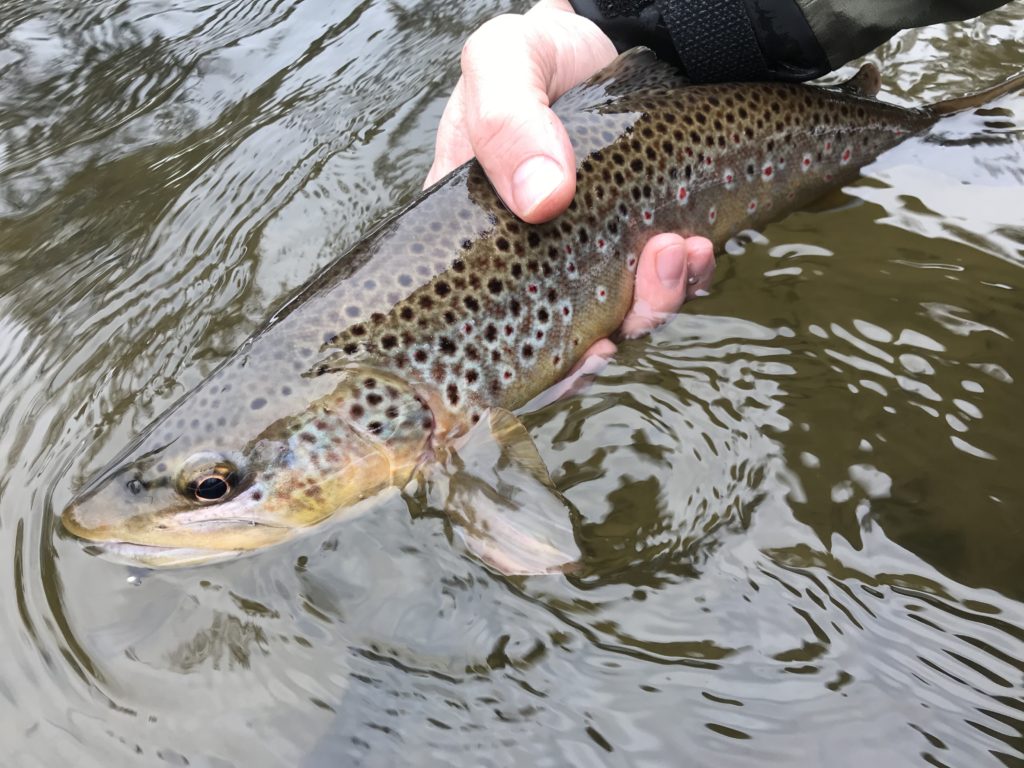 I’ve gone thru a lot of nymph rigs this winter and discussed plenty more with the shop folks and I’ve settled on a long thin tippet suspended from a yarn indicator with an anchor fly on a jig hook and another tungsten fly, smaller, as a dropper tied in about sixteen inches above the anchor fly.  About sixteen inches up the dropper I’ve put in a blood knot so I can add small split shot to work my way down thru the water column.  The beauty of this rig is that it can quickly go from blind fishing to sight fishing and back again, can easily fish shallow water runs – which will become more important over the next few weeks – and can be fished at a great distance for spooky flat water fish.    I can even lift the indicator off the water and have a passable tight line presentation if the water is fast and right for it.  But what I’ve come to figure out this year – both through personal exploration and through notes with other anglers – is that the sight fishing opportunities on the Au Sable are bigger than I thought…and I’ve thought, and done it, a lot.  The nature of this river is so slow and meandering perhaps it is one of the best ways to nymph fish it in the winter.  I’ve taken to exploring some unconventional choices of water and have found trout sitting out in all of them, almost always over sand, almost always behind a small hump or other obstruction, and almost always feeding.  It’s not fast and furious, but not much is in March.  The trout caught are well-earned.

The next ten days look pretty awesome for all you streamer and nymph anglers but the river accesses are terrible now and sure to be worse as the snow settles into what I call the overconfidence zone.  If it looks doable, it’s probably impossible.  And if it looks easy, it’s might just be doable.  If you’re going to float, bring a rope for the launches.  Also, many of the river stretches may be blocked by fallen trees including the North and South Branches.  The stretch below Mio is open, accessible, and floatable.

While black is a great streamer color, March means that yellow and light olive/white combinations will move fish.  This is a good thing.  I’d much rather fish a fly that’s easy to see.  Tomorrow we’re supposed to get a warm rain and the river, a tad high today, should bump up another inch or two before the colder weekend halts the run-off…which is also a good thing.  I fish big streamers in the winter…and I’ll keep doing so in the spring.  Four to six inches seems to be what a lot of the trout want.  But as the water warms and some of these big fish become mid-river, or at least inside seam, feeders, fishing smaller flies can be just as productive, especially on the warmer afternoons.

For nymphs, I’ve been doing pretty well on size 12 and 14 tungsten nymphs – nothing fancy.   I like to pair this up with a Hendrickson or BWO nymph this time of year.  The rocks are now crawling with bugs, and the first black stoneflies should appear during the next sunny warm day.

It sure is great to emerge from the other side of the fly show and into spring.  Many thanks to the Midwest Fly Fishing Club for all their assistance in orchestrating a great show.  It was awesome seeing a lot of river people, and feeling the excitement of another fishing season.