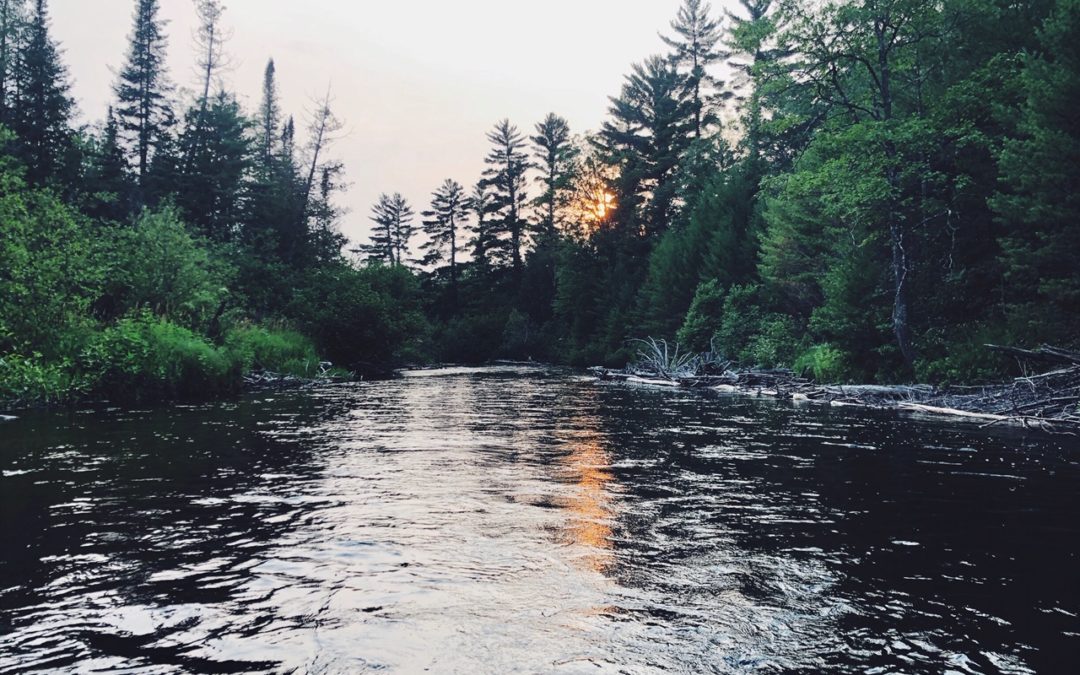 It’s canoe marathon week on the Au Sable.  The race kicks off Saturday evening, sending a horde of paddlers down the dark river.  Sunday morning the water on the mainstream will be dirty.  For years it’s been a tradition among a few of us to watch the racers go by the lodge and then head to the South or North Branch and do a little night fishing.  The race is the last big interruption to our fishing season but it really only impacts the mainstream and the Manistee, North and South Branches are all in excellent fishing condition.  As are the smallmouth spots: 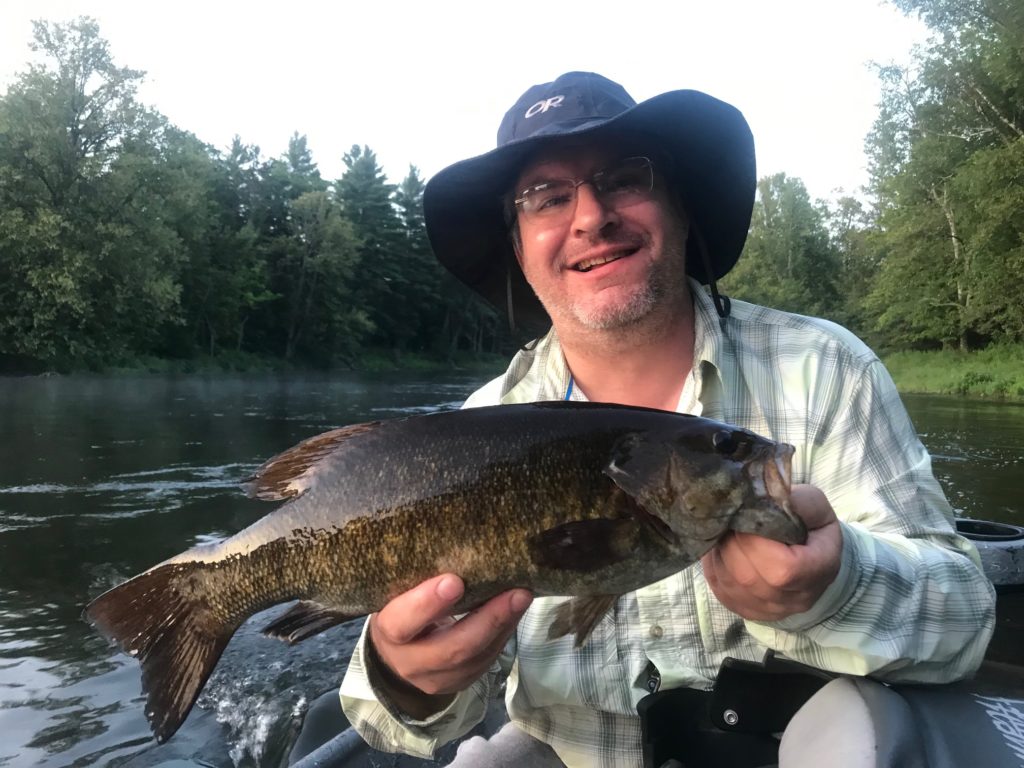 We’ve had the sort of diverse week that only July can produce.  Wake up at dawn and nymph or streamer fish until you start seeing tricos.  Swap out leaders (or sit on a log and tie one up), go 8x, go #24, and work pods of fish.  At some point, the rises change, become more aggressive — the #18 BWOs have begun hatching.  Tie on the olive to 7x, drop off a tag of 7x fluoro, add the nymph…and fish the two-fly rig thru the noon hour.  There’s a lull….have lunch.  Then return to the river with a Patriot or Deer fly and a brighter dropper, a Copper John perhaps, and hit the drops behind the weedbeds.  That’ll work until 4 or 5 pm, when it’s time to put on a skunk (the red yarn skunk has been pretty tough to beat) and twitch the wood and bubble lines.  Early evening, the caddis and tiny olives start.  Back to the 8x.  At 9 pm, the rises are louder, and by 9:30 there are good fish dimpling.  Cut off the 8x, tie on the a little brown spinner, size 18: those morning BWOs are spinning.  Last light: 10:05-10:30.  Cut back to 5x and knot an Iso or an Adams para size 12 and search the last of the visible water, cast at the last of risers.  Pause.  Snack.  Now cut back the entire leader until it’s tapered to rope, put on a gurgler, and start swinging the middle of the river.  Focus on the where the riffles drop into the pool, the inside of the bends, and the tail-outs.  This, yes, can go on all night. 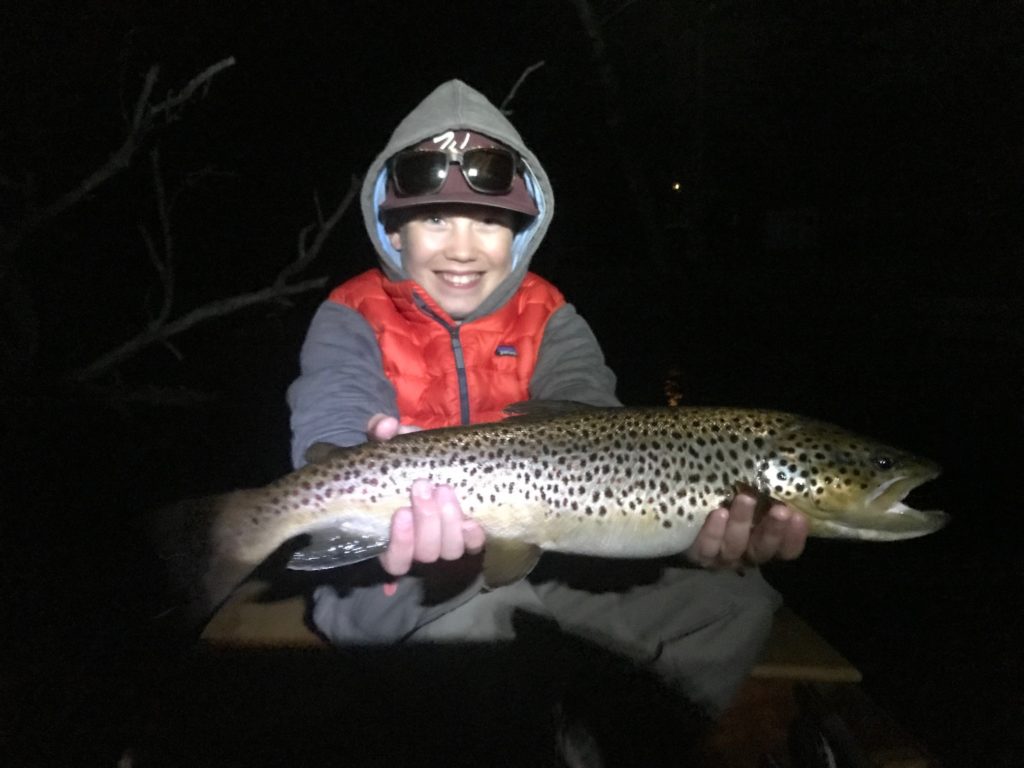 The other day I went for a fun fish to see what was happening.  It’s a foot thing…I love to fish by myself and on foot.  Out west, everyone likes to confide that while they like the main river, it’s the side channels that they truly love.  I think it’s like being in a big old house and finding the super cool secret office, where all the cool mounts are.  Now, you might find one of these side channels splits into another side channel…now you’re in the secret vault, the one behind the book shelf of that secret office.  And finally, that secret side channel splits again, and way up in that nook there’s a little riffle, a little drop-off, and water in the corner is so cold it wears its own little misty hairpiece.  Now you’re in the triple-locked safe, the secret heart of the house, where the brook trout spawn, and rise all day, in the cool waters of the earth. 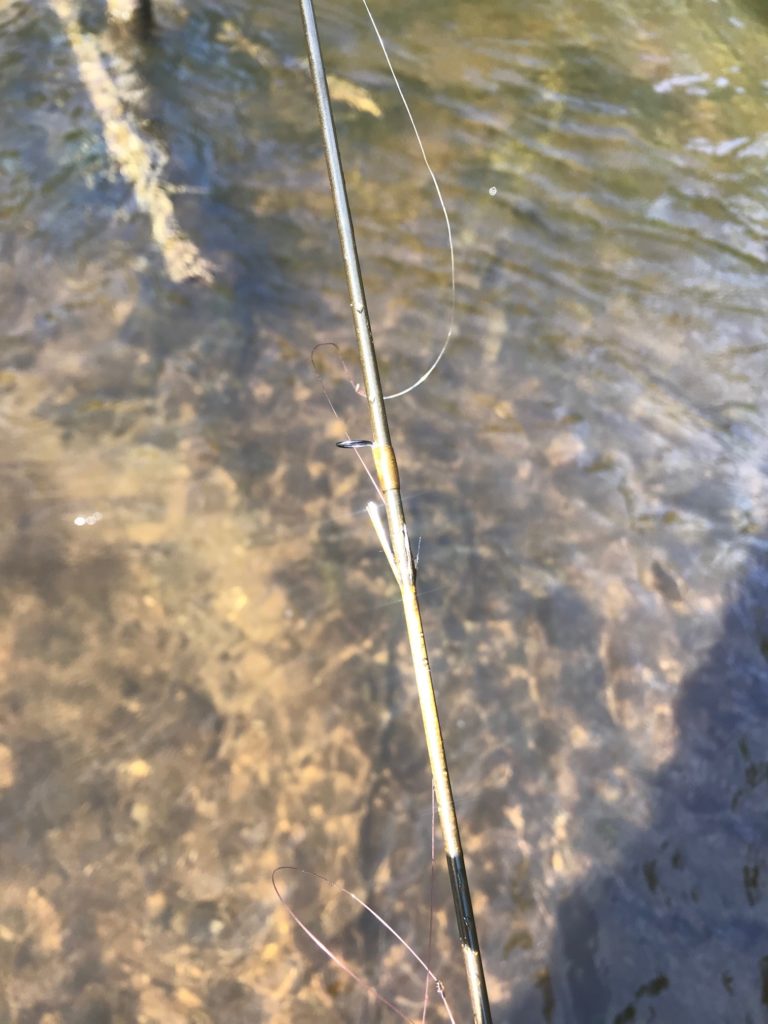 The first break was just at the top ferrule.  I pulled out the broken piece of the female end and jammed the rod back in.  This lasted one trout, and broke again.  Another trout, and broke again.  I worked back into the channels and on the last drop-off with what would be the last cast with that rod, I threw a parachute Adams up into the bouncy little riffle that was no more than three feet wide and a fine brook trout came up, ate, snapped the rod, and was landed at my feet. 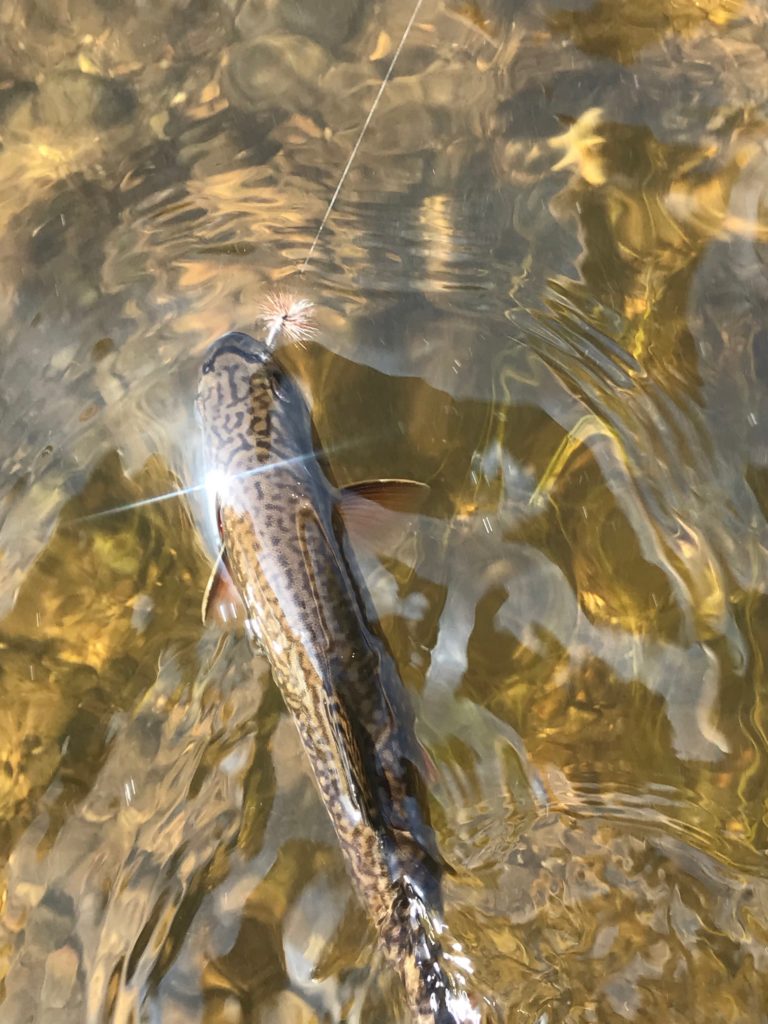 The Kid’s One Fly (Box)Challenge, Saturday, Aug 10: The Anglers of the Au Sable sponsors this annual event. This is our 7th Kids One-Fly (Box) Challenge for anglers 17 years and younger. All participants will receive a complimentary fly box with donated flies and, if needed, volunteer chaperones to take them to the river (or pond, or lake, or creek) for a morning of fishing. Awards! Prizes! Anglers must use the flies in their box of choice. We do this because kids are awesome, and a kid fly-fishing is even awesomer. Our favorite event of the year. We’ll meet at the lodge at 9 a.m.. Kids receive instruction and a casting lesson from FFF Certified Instructor Mark Hendricks. At 10:30 a.m., we go fishing! Meet back at the lodge between 12 and 2 p.m. for lunch, drinks and awards. We try to have enough rods and waders for youth participants, but encourage those that have their own to bring them.

The Midnight Derby, Saturday, Aug 10: Have you ever seen so many people who think going fishing at midnight with a box full of mice is cool? Neither have we. So we celebrate it: a night fishing one-fly “competition.” Every year we raise well over $1000 for the Headwaters Chapter of Trout Unlimited. This is a fun event. Not a serious competition…though we do offer some real prizes. Includes a huge barbecue at 7 p.m., music, and the infamous mailbox challenge. The bell rings at 8 p.m. Anglers may fish anywhere on the Au Sable and Manistee Rivers, but must return to the lodge by 3 a.m. with a picture of their RELEASED trophy. The Derby is open to everyone and anyone, from guides, to those being guided, to folks casting off their docks, and anyone else who wants to go night fishing for a good cause. $50 per team of two people.